Testimony on Education Proposals in Executive Budget for Fiscal Year 2021

Thank you for the opportunity to submit testimony.

The Citizens Budget Commission (CBC) is a nonprofit, nonpartisan think tank dedicated to achieving constructive change in the finances and services of New York City and New York State government. Due to education’s vital role for New York, now and in the future, CBC has long supported achieving a sound basic education for all students as required by the State Constitution.

CBC’s testimony focuses on three key points about the education proposals in the Executive Budget for Fiscal Year 2021:

The Executive Budget provides $750 million more than is needed to fund a sound basic education statewide.

During the 2020 State of the State address, Governor Andrew Cuomo urged “us[ing] State funds to raise those at the bottom,” and the Governor could not be more correct.1  However, the Fiscal Year 2021 Executive Budget school aid proposal fails to provide all districts with enough funds to provide a sound basic education (SBE), despite increasing aid 11 times more than is needed to ensure all districts have sufficient funds. The increase is not sufficiently targeted to those that are underfunded.

In school year 2018, the most recent year for which data are available, school districts in New York spent more than $72 billion using local, State, and federal funds, which CBC estimates is $13.6 billion more than is necessary to fund an SBE as defined by the Foundation Aid Formula. (The methodology is summarized in the Appendix.) Based on our analysis, 25 districts lacked the resources necessary to fund an SBE, and 21 of these are high-needs districts.2 The total amount of funding needed to bring the 25 underfunded districts’ funding to the level needed was $75 million in school year 2018.3

The Fiscal Year 2021 Executive Budget increases total education aid by $826 million, $751 million more than the $75 million needed. Assuming nothing has changed since school year 2018, the Executive Budget proposal does not solve the problem for all the underfunded districts; 13 districts will continue to have insufficient resources for an SBE, with a funding gap of $30 million.4  (See Table 1.) 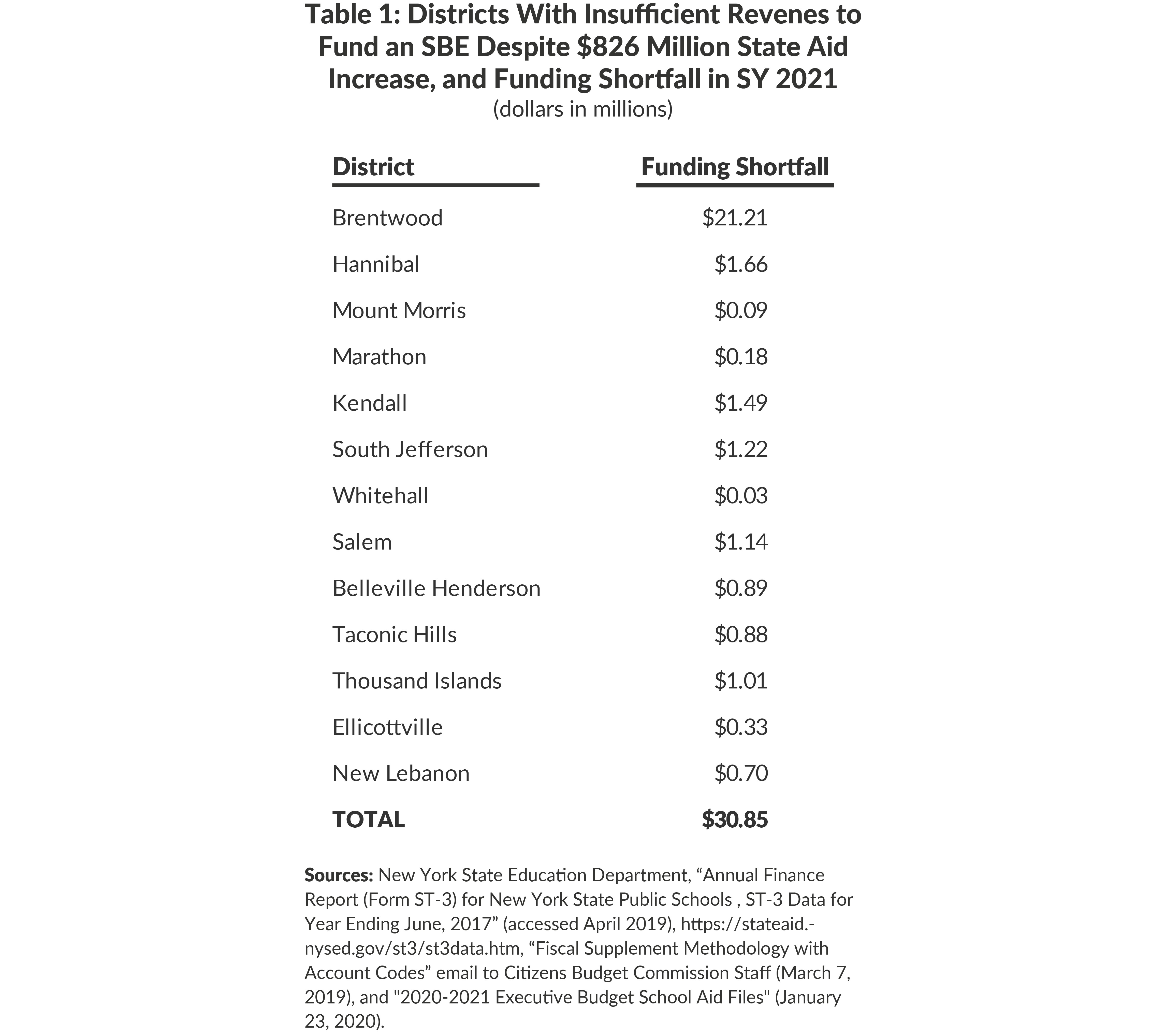 The Executive Budget’s proposed increase includes a $200 million “fiscal stabilization fund.” This is the third year the Governor has proposed a school aid allotment for the Legislature to allocate. The amounts have grown from $64 million in fiscal year 2019 to $157 million in fiscal year 2020. Rather than provide this unnecessary aid the State should dedicate these funds to the State’s reserves in preparation for a recession, which could help offset possible school aid cuts during a recession.

Folding ten types of state aid into Foundation Aid is a step in the right direction, but the Executive Budget proposal is structured poorly.

Library, textbook, and software aids provide the exact same amount per pupil regardless of student need or district wealth and high tax aid actually provides more aid to wealthier districts.6 The remaining TDEAs affected by this proposal provide greater reimbursements to higher-need districts, but are less progressive than current Foundation Aid distributions. This proposal should be improved by distributing the $1.8 billion according to a revised Foundation Aid formula that fully accounts for student need and all revenue sources.7

Changes to other formula based aids are beneficial, but more fundamental change is needed.

The Executive Budget proposal prohibits building aid for athletic facilities not needed for physical education and decreases minimum reimbursement received by wealthy district from 10 percent to 5 percent. The budget proposal would also limit growth in per-district transportation operating expense aid to inflation or pupil-adjusted inflation, whichever is greater, beginning in school year 2022. Taken together, these two aids account for more than $5.1 billion per year and reining in their costs while targeting benefits to needed projects is a welcome change.

The Executive Budget increases aid more than is needed to fund an SBE at a time when the State is proposing to close significant gaps with major year-to-year cuts in Medicaid, and does not tackle the most important shortcomings of current school aid formulas. By lumping less progressive forms of school aid into the Foundation Aid distribution without revising the underlying formulas, future Foundation Aid distributions will drift farther from the formula’s original intent. Instead, the State should fold those aids into the Foundation Aid formula and distribute them based on need. To better distribute all Foundation Aid based on need, the formula should be fixed to more accurately reflect student need and local revenue efforts, relax hold-harmless provisions, and eliminate automatic minimum increases. Lastly, the State should move forward with controlling building and transportation aid costs while ensuring that schools have what they need to provide a sound basic education.

This analysis uses data included in the School Year 2018 Enacted Budget School Aid Run and the 2017-18 Masterfile published by the New York State Education Department. These data are the best publicly available data that detail the calculations utilized in determining the costs of a sound basic education and State, local, and federal aid in every New York school district. The basic methodology employed in this analysis compares the total costs of a sound basic education to total revenues received by a school district.

Testimony on Education Proposals in Executive Budget for Fiscal Year 2021