This policy brief updates the Citizens Budget Commission’s two previous analyses of the cost of New York’s state and local economic development programs. This brief finds that between 2016 and 2018 state and local economic development costs continued to increase, state spending shifted toward discretionary grants and away from as-of-right tax breaks, and transparency has not meaningfully improved. These continue the trends found in the September 2016 policy brief Increasing Without Evidence that examined changes between 2014 and 2016.

A positive development is a gubernatorial proposal to improve transparency through a “database of deals” and procurement reform. It would be best to codify these commitments in law. Other reforms are still needed, including establishment of a forward-looking unified economic development budget, standardized metrics across programs, and improved program design.

Programs Growing Considerably During this Period

Sales Tax Benefits for Production and Research and Development

Spending by the State’s main economic development agency, the Empire State Development Corporation (ESD), grew 63 percent from $739 million in 2016 to $1.2 billion in 2018. During this period, the legislature made several large appropriations for major new projects under ESD’s jurisdiction, including the construction of Moynihan Station in Manhattan ($700 million), a second phase of investment in the Buffalo Billion ($400 million), and a Life Sciences Initiative and new laboratory ($1.1 billion). In addition, appropriations were made creating two new sources of funds without specified projects: the Strategic Projects Program ($208 million) and High Technology Innovation and Economic Development Infrastructure Program ($300 million). Spending under these appropriations will occur over several years. ESD also continued spending on existing programs such as the Regional Economic Development Council initiative. 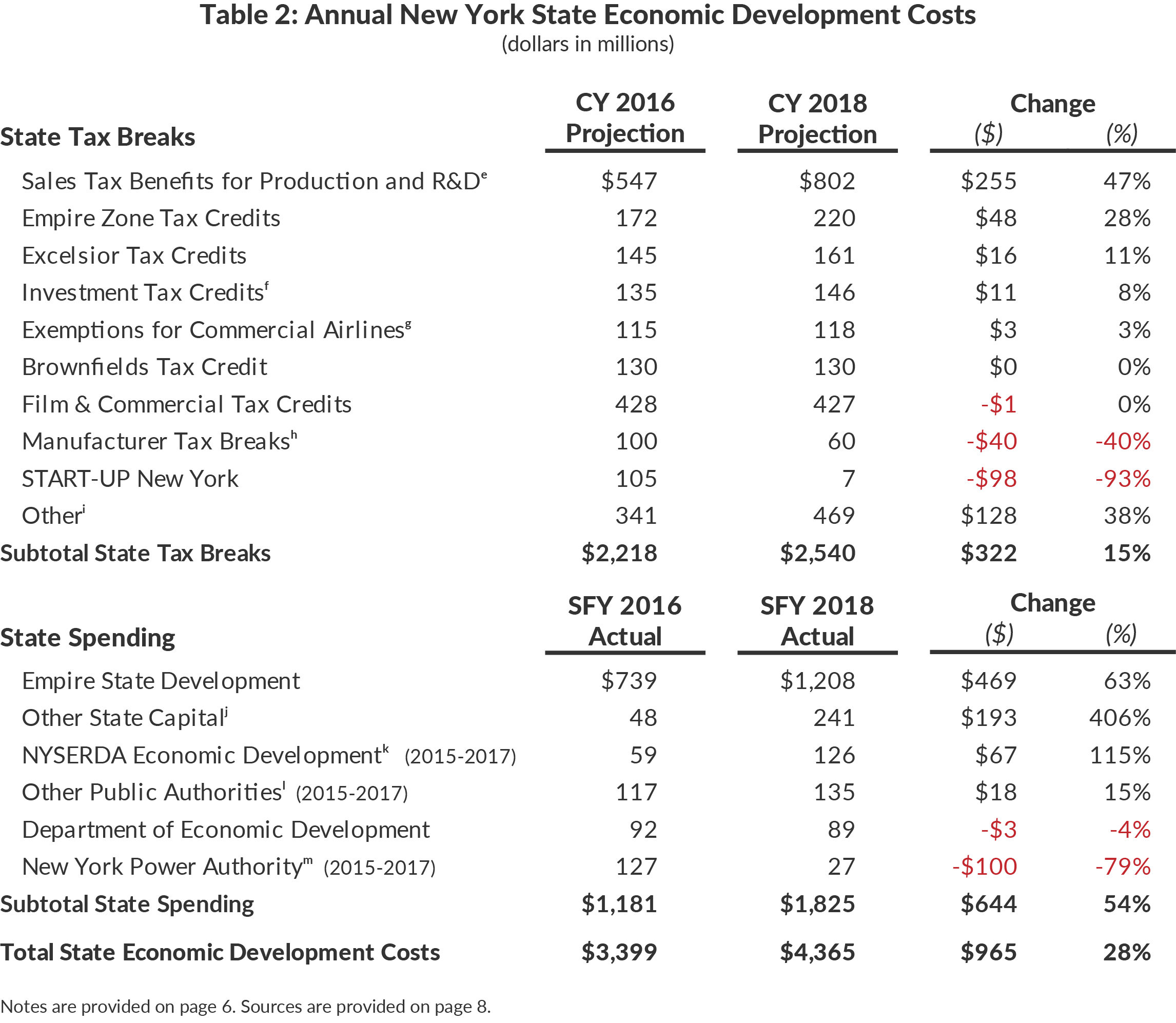 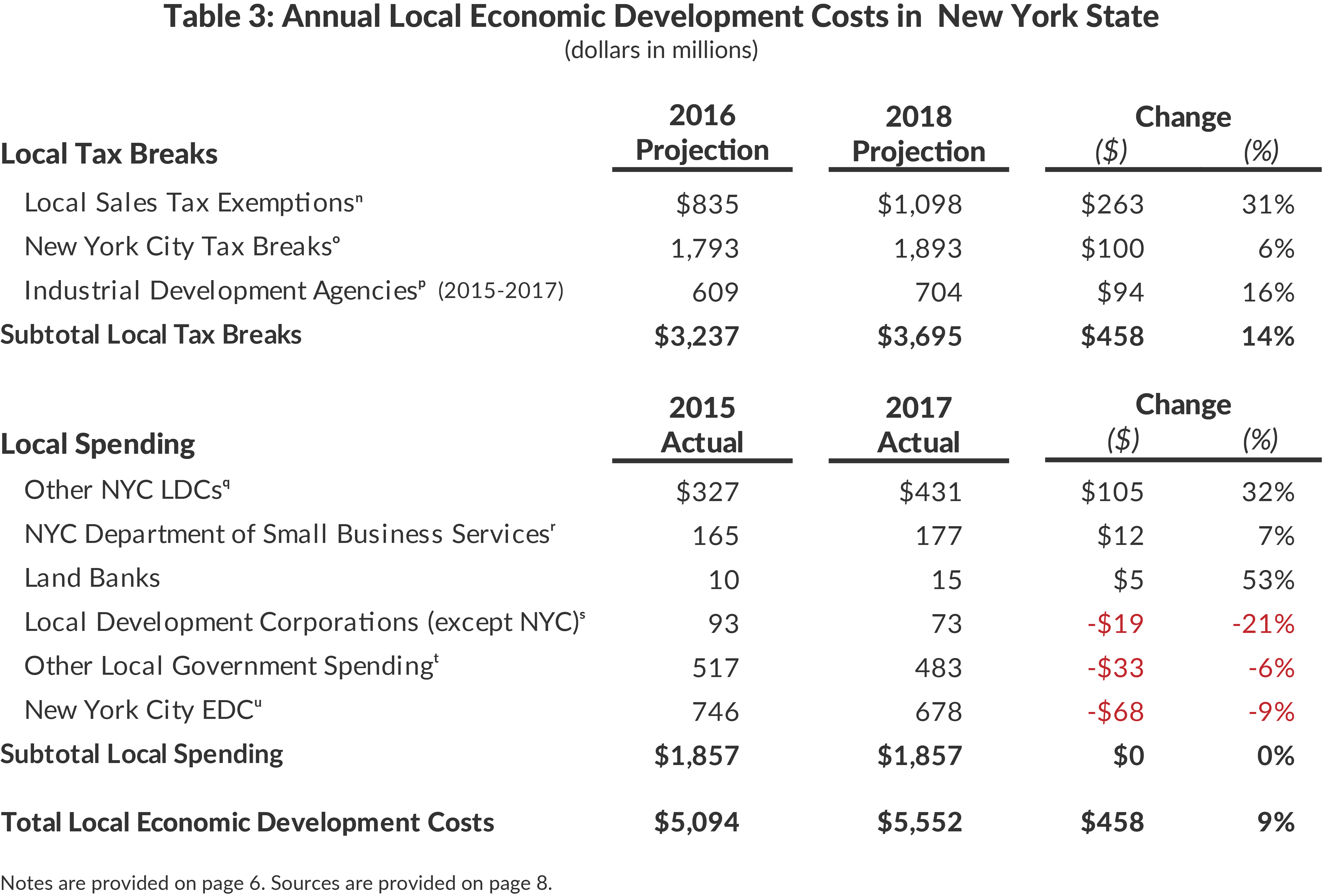 Programs Shrinking During this Period

This program, which allows for ten years of tax-free operation for new and expanding businesses that locate in designated areas on or near college campuses, has been smaller than anticipated. The decrease in the projected value from $105 million in 2016 to $7 million in 2018 reflects this gap.

Market rates for electricity have fallen faster than the rates NYPA offers through its ReCharge NY program, so there has been no effective cost of selling power through this program in 2015 and 2017 (the years for which data are available). Other aspects of NYPA’s economic development costs decreased over this period. The value of NYPA’s hydropower programs, which also offer power at a discounted rate, have fallen due to the decrease in market prices. In 2015, NYPA made a $67 transfer to ESD, which was not listed as revenue in ESD’s financial statements. A similar payment was not made in 2017.

Although spending growth continues, important reforms to improve transparency and accountability have not been made.2 In the 2018 session, the State Senate passed three bills to create a database of economic development deals, establish a unified economic development budget, and reform procurement by restoring the State Comptroller’s oversight of contracts made by the State University of New York, City University of New York, or the state’s Office of General Services, which previously had been eliminated.

Both a database of deals and procurement reform were included in the Governor’s book of proposals released with the State of the State, and the Executive Budget includes an appropriation to fund the creation of a database.3 However, these proposals are not included in the Article VII bills accompanying the Executive Budget, so they would not have the strength of law. These reforms should be codified in statute and passed by the legislature in this session. In addition, further reforms are needed: a unified economic development budget that includes information on the costs of all economic development programs for the coming fiscal year; standardization of metrics across programs to allow for comparability of results; and program design improvements so that benefits follow private sector investment, eligibility is standardized, and results are evaluated regularly.4

Totals may not add due to rounding.

[h] Includes real property tax relief credit for manufacturing. Does not include the $193 million value of the elimination of net income tax on corporate manufacturers in 2016, because the impact of this change is not reported for subsequent years.