The recently released Fiscal Year 2019 Executive Budget indicates spending on services for New York City’s homeless population, across all relevant agencies, will reach $3.0 billion in the current fiscal year, 2018. This is nearly two and one-half times the $1.3 billion spent in fiscal year 2014, Mayor de Blasio’s first year in office. Most of the spending growth (59.1 percent) has been for Department of Homeless Services (DHS) shelters, but there have also been significant investments in services intended to stem the flow of people into shelters and accelerate their transition into permanent housing. Despite multipronged concerted efforts, the dramatic growth in spending has not produced reductions in the number of people in City shelters, and homelessness remains a serious problem for which solutions remain elusive.

The majority of services provided to New York City’s homeless population are provided by DHS and the Department of Social Services (DSS). Together the two agencies account for 97.2 percent of total spending on homelessness. DHS functions have become concentrated increasingly on providing shelter and serving the City’s street homeless, while DSS is primarily responsible for the provision of prevention services such as anti-eviction legal services and rehousing initiatives, including the Living in Communities (LINC) rental voucher program.1 Other shelters for specific purposes are operated by DSS, the Department of Youth and Community Development, and the Department of Housing Preservation and Development.2

As seen in Table 1, total spending for homeless services in fiscal year 2018 is projected to be $3.0 billion, more than double the cost in fiscal year 2014.3 More than half of the growth, $997.0 million, is for shelters to house families and single adults. The service area with the second largest increase in costs is rehousing, which grew by $277.3 million, or 455.9 percent, followed by prevention services which grew by $211.1, or 215.4 percent. Spending on services for the street homeless has also grown substantially. 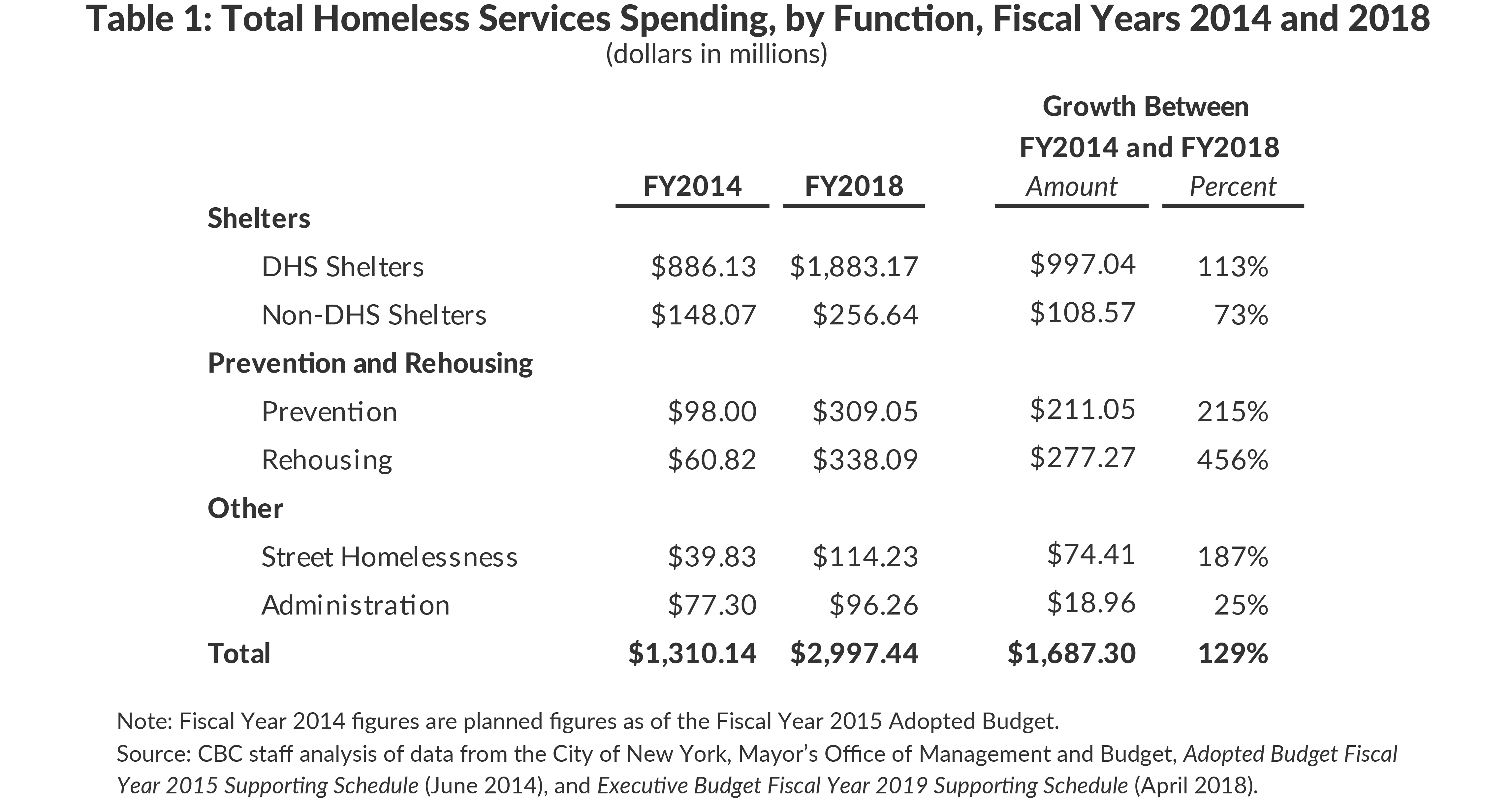 The single adult and family shelter censuses have grown over this period by 41.5 percent and 10.4 percent respectively, but shelter spending adjustments are not solely driven by increases in the shelter population.6 As shown in Figures 1 and 2, in fiscal years 2014 and 2015, shelter spending for single adults and families grew along with the average annual shelter census for both populations. Starting in fiscal year 2016, however, spending growth has far exceeded population growth. 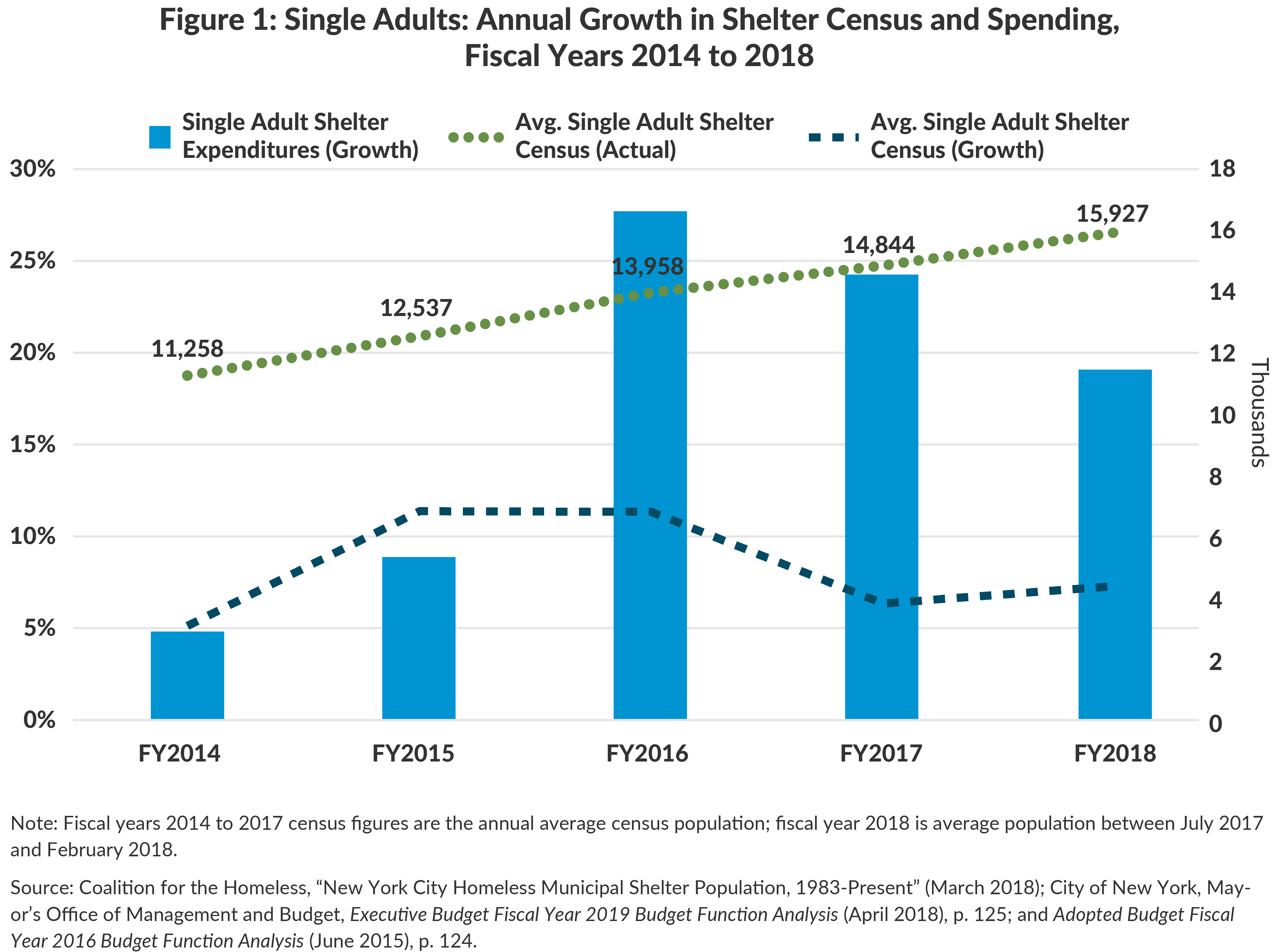 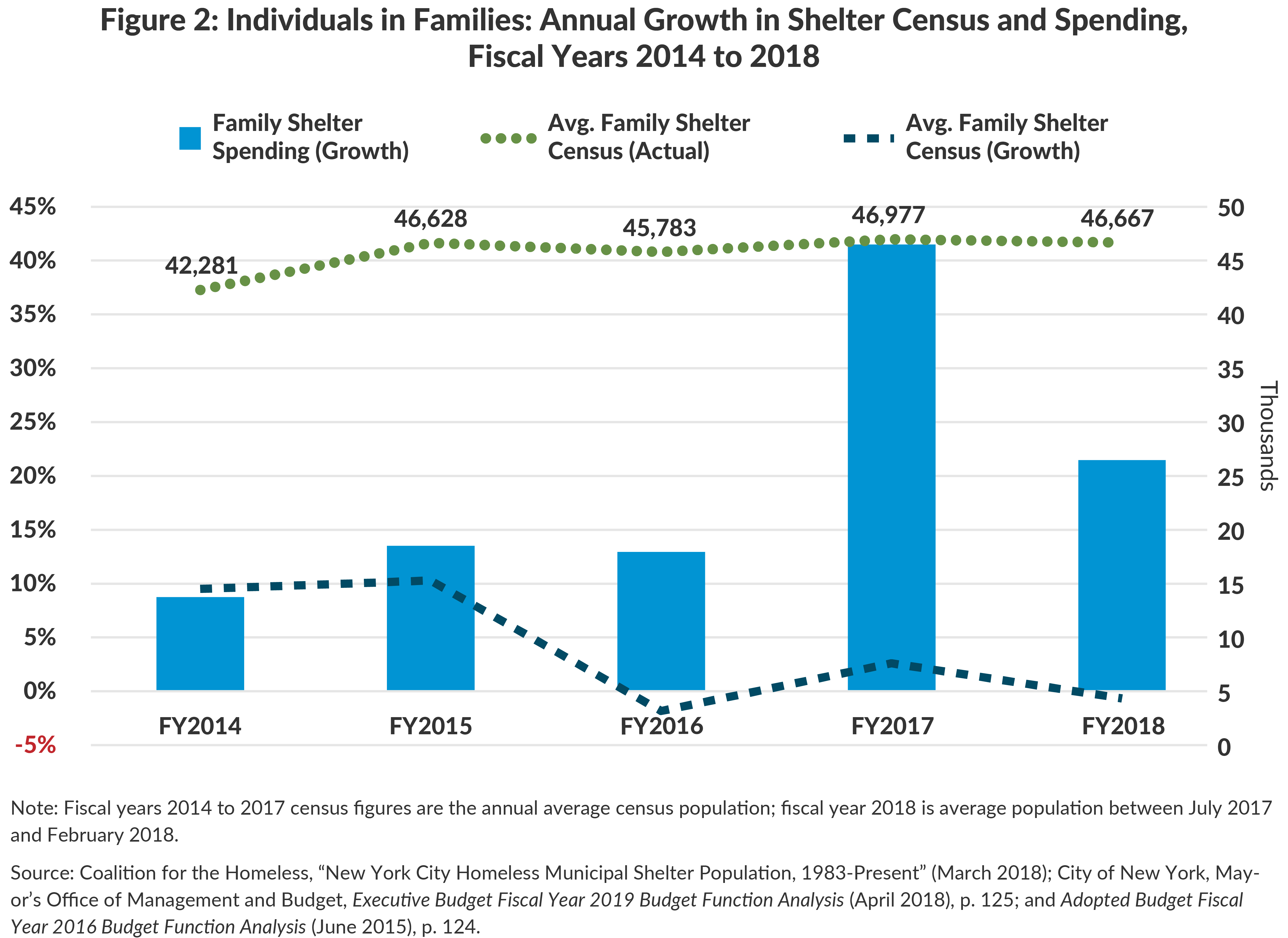 Increases in per household shelter costs have been dramatic. In fiscal year 2014 the average cost to provide shelter to a single adult was $23,921 and $44,672 for a family. That has since grown by 58.8 percent and 63.8 percent respectively to reach $37,994 per adult and $73,162 per family in fiscal year 2017. (See Figure 3.) As space in traditional Tier II shelters has filled up, people are being housed in commercial hotels, significantly increasing costs.7 DSS Commissioner Steven Banks stated in recent testimony that the City spends $364 million annually on commercial hotels and estimates savings up to $100 million per year if it was able to eliminate the use of hotels and shift to Tier II shelters.8 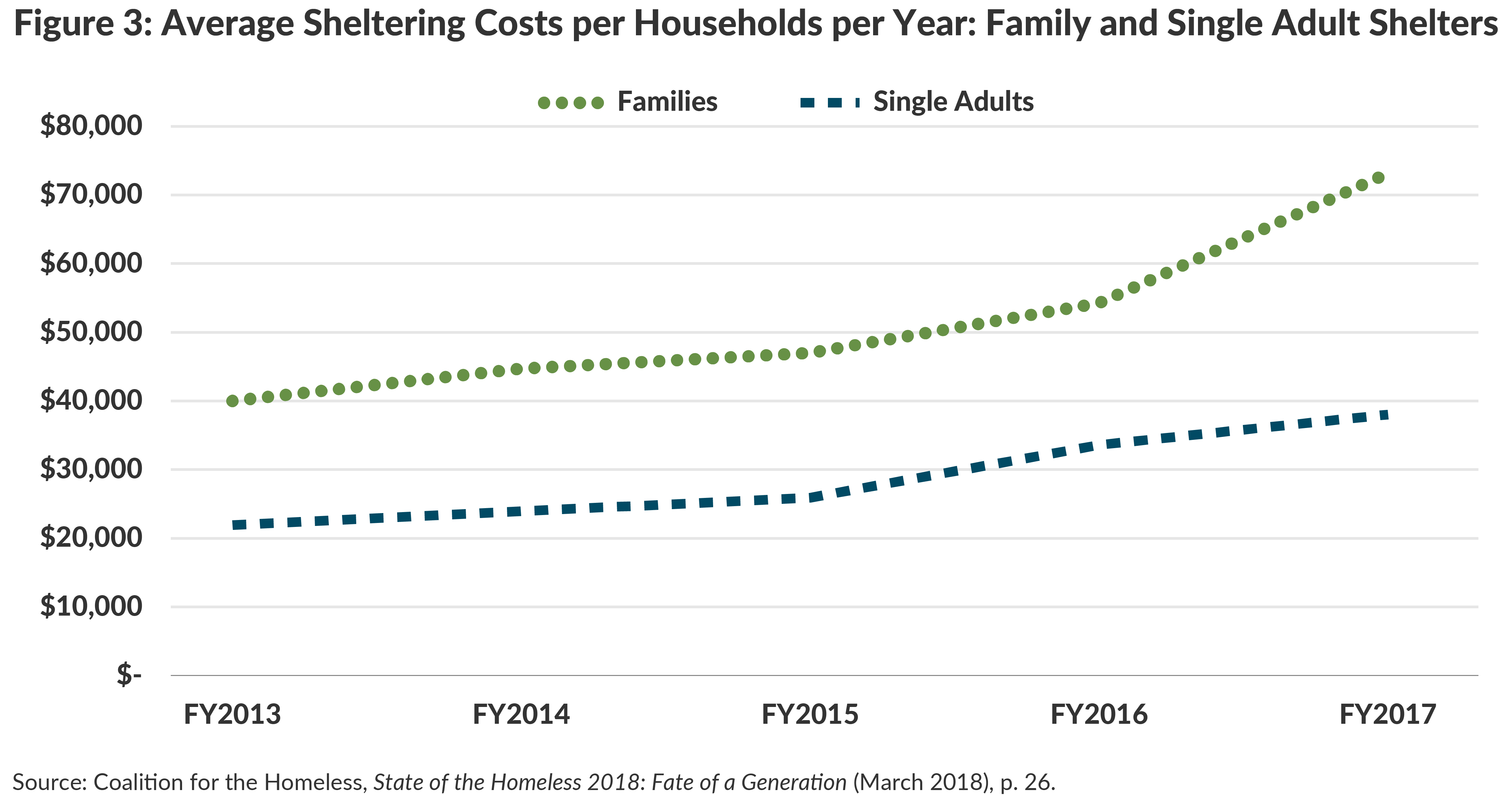 The Administration has also been moving families out of cluster sites, which are privately owned rented apartments provided to homeless households. Cluster sites are less expensive than hotels but suffer from safety and quality issues.9 To eliminate the use of commercial hotels and cluster sites, the Administration announced a plan in February 2017 to open 90 new Tier II shelters allocating an additional $300.1 million to the capital commitment plan.10

Spending on rehousing is budgeted at $338.1 million in fiscal year 2018 to fund a range of programs targeted to different populations. The largest de Blasio initiated program is the LINC rental voucher program established as a successor to the Advantage voucher program.14 The LINC program has six subprograms; in aggregate 8,552 households, comprising 18,609 individuals, received a LINC voucher from the beginning of the program in fiscal year 2015 to December 2017.15

Spending on LINC vouchers increased from $66 million in fiscal year 2016 to $91 million in fiscal year 2018 but has consistently fallen far short of levels projected in adopted budgets. (See Table 2.) Some voucher programs have exceeded expectations (LINC IV for seniors) while others (LINC III for families affected by domestic violence) have fallen short. Advocates cite reluctance on the part of landlords to accept the voucher as a potential reason for the program not meeting targets.16 The number of additional households being placed in permanent housing using a LINC rental voucher program has declined each year. (See Figure 4.) 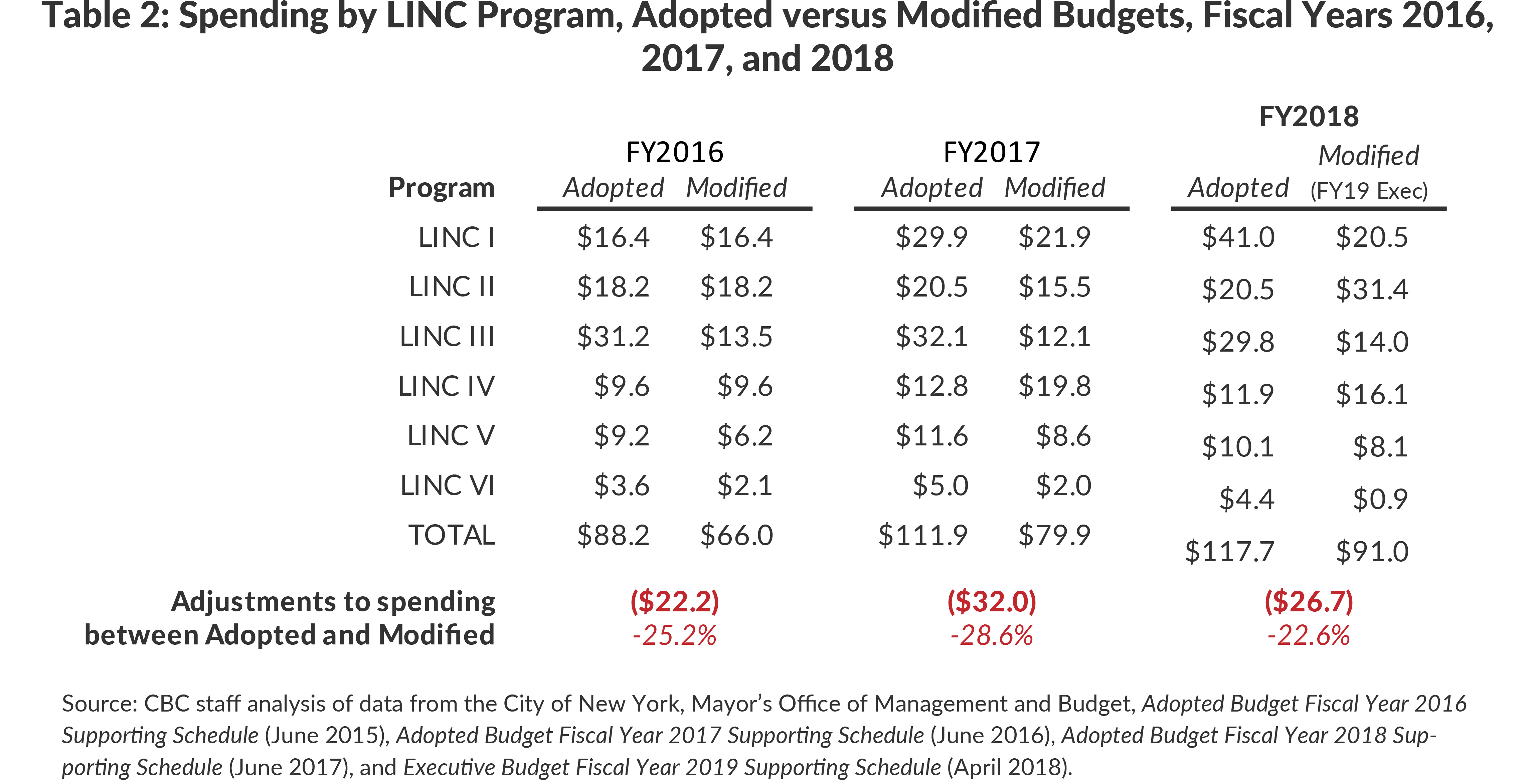 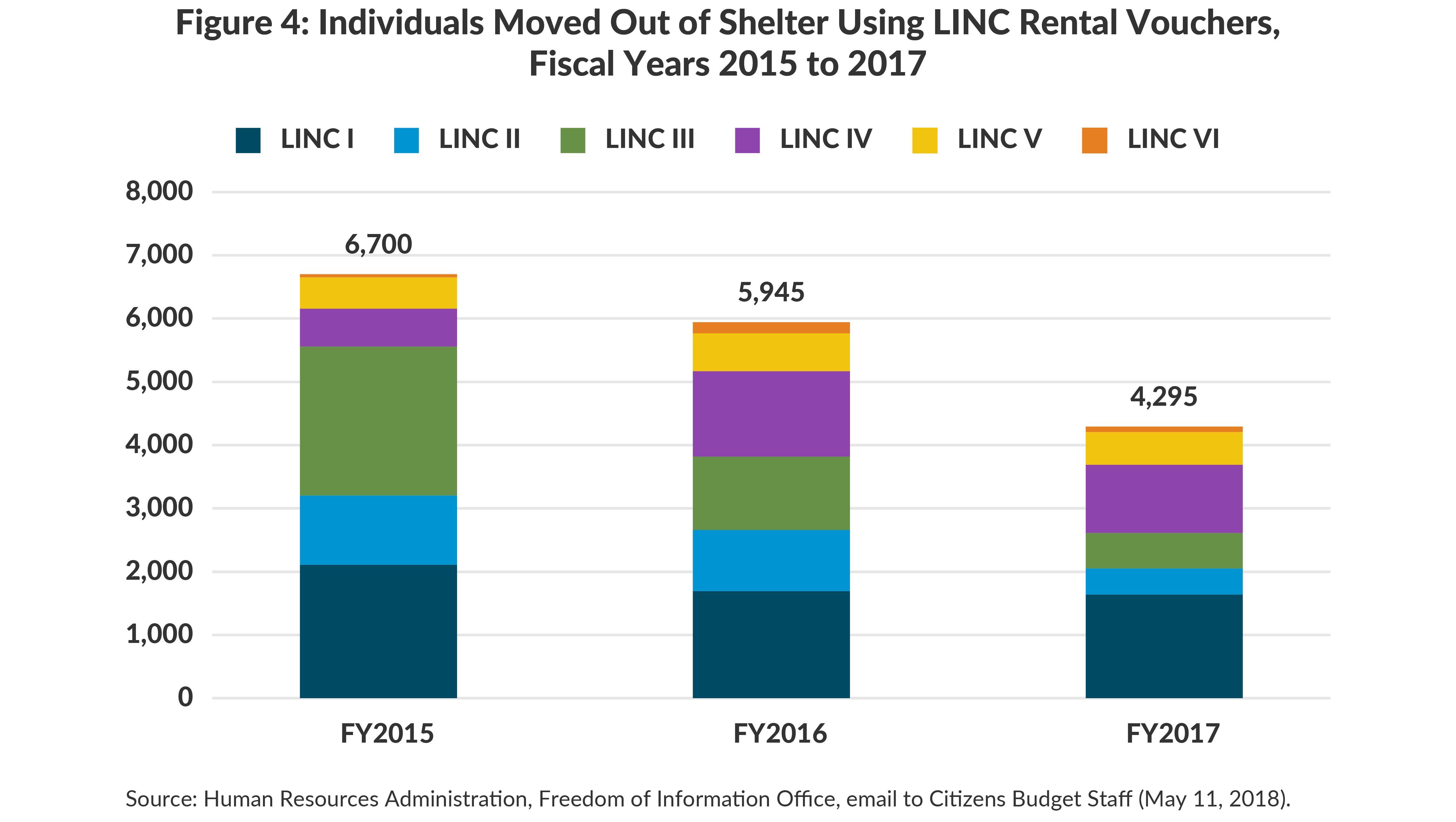 More progress has been made through other rental initiatives: the CITYFEPS Rent Supplement Program and Single Exit and Prevention Supplements provide rental supplements to households in shelter or at risk of entry; the federally funded HOME Tenant-Based Rental Assistance Program  aids families in shelter, but is not accepting new applications; and some public housing units and Section 8 vouchers are being reserved for homeless households.17 Taken together these programs helped 21,498 individuals avoid or leave shelter in fiscal year 2017, up from 9,656 in fiscal year 2015.18

The Administration claims that without these initiatives the shelter census would currently be in excess of 71,000.19 While stabilizing the family shelter census is a step in the right direction, it is difficult to connect these services to a reduction in the number of people who would have become homeless over that time period or to measure their impact on the overall census.

Time for a Plan to Control Spending

Planned expenditures of $3.0 billion in fiscal year 2018 are a stunning figure. For perspective, the City budgeted $2.2 billion for the Fire Department, $1.7 billion on sanitation services, and $1.1 billion for libraries, parks, and cultural affairs for the entire city.21 Continually increasing annual spending for homeless services beyond the budget initially approved by the Mayor and Council indicates the Administration is failing to live up to expectations about the impact of its programs and raises important questions about the viability of its strategies. The Administration’s homelessness plan issued in February of last year, Turning the Tide, did not include a clear and specific explanation of how it will control costs of homeless services.22 It is past time for the Administration to provide such a plan.