On June 16, 2018 members of the United Federation of Teachers (UFT) will receive a 3 percent raise, the final salary increase under the current labor contract which expires this November.1 This increase follows a 2 percent raise that took effect on May 1, 2018. These raises also go to teachers in the Absent Teacher Reserve (ATR)—a pool of teachers without permanent classroom assignments who nevertheless continue to receive full pay.2 Continuing to pay teachers in the ATR will cost the City $136 million in this school year. The City should pursue reforms to the ATR, such as a six-month time limit, in upcoming labor negotiations with the UFT.

Establishment of the ATR

The ATR is a pool of teachers and other UFT members who were “excessed” from permanent school positions; that is their positions were eliminated due to school closings, enrollment declines, budget cuts, or other reasons that do not provide direct cause for terminating employment under the current contract.3 ATR teachers may be assigned to work as substitute teachers or to perform administrative duties.

The ATR was created in 2005 during Mayor Michael Bloomberg’s Administration in order to give principals greater control over hiring decisions.  Previously, teacher contracts included provisions under which excessed teachers were placed in other schools. Senior teachers were able to select the school to transfer into, often displacing more junior teachers and infringing upon a principal’s discretion over staffing.4 These seniority protections were eliminated in the 2003-2007 contract, with the guarantee that excessed teachers would continue to receive full pay while looking for a new position.

The Size and Cost of the ATR

The number of teachers in the ATR fluctuates over the course of a school year, but overall the ATR has increased in both size and cost since it was established. The pool is often largest at the beginning of the school year, decreasing as teachers secure permanent positions during the school year. However, there is also a substantial share of teachers who remain in the ATR for many years; in 2017 one-quarter of teachers in the ATR were there five years earlier.5 Some research indicates that some ATR teachers do not actively seek job opportunities, have some unsatisfactory observations in their files, or both.6

In addition to more personnel, the ATR has grown in cost because its teachers are generally more senior and continue to receive contractual salary increases—even though they are not working. On average, ATR teachers have 18 years of service and a salary of $98,126, compared to 10.2 years and 84,108 salary for NYC teachers overall.10 The City and the UFT agreed to a contract that increased wages 19 percent between November 1, 2009 and November 30, 2018.  The last raise to be granted under this agreement will be 3 percent on June 16, 2018, bringing the maximum teacher salary to $119,472.11 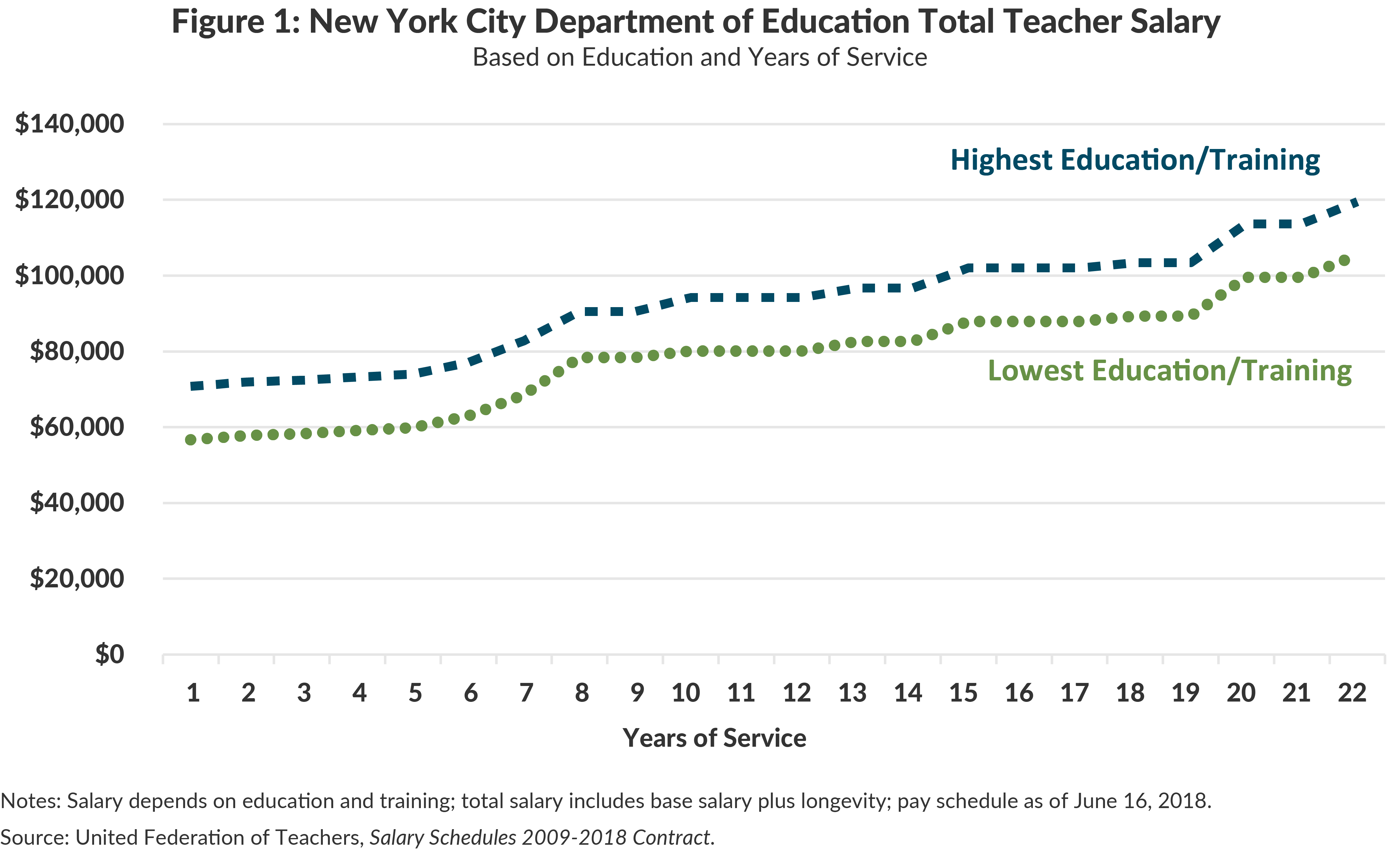 Strategies of the de Blasio Administration to Reduce the ATR

The higher salary, coupled with possibly poorer performance, can be a disincentive to principals to hire from the pool since they need to fund teacher salaries from their school budgets.12 School budgets are mainly set by formula based on student demographics and not dependent on the salaries of teachers.13 In other words, the budget of a school will not increase or decrease if an ATR teacher is hired by the school; instead the school would pay the teacher’s salary from its predetermined school budget.14

The Department of Education (DOE) initially offered budgetary incentives to principals to hire ATR teachers, such as paying the salary centrally for the first year or covering the difference between the actual and average salary.15  Most recently these efforts are credited with principals hiring 372 ATR teachers in the 2017 school year.

Third, since fall 2017 the City has placed ATR teachers in schools with vacancies without prior approval from principals. Some oppose this effort, calling it forced placement and arguing that ATR teachers are being placed in the City’s neediest schools.17  As of February 2018, 75 teachers were placed generating savings of $7 million a year by fiscal year 2020.18  This fell short of the target of placing 400 teachers, which may suggest a lack of appropriate vacancies or difficulty securing full-time placement in the classroom for certain teachers in the ATR.

Approaches to Excessed Teachers in Other School Districts

Other cities have successfully ended seniority rights without creating new entitlements; for example, Chicago and Washington, D.C. have imposed limits on paying excessed teachers.19 In Chicago excessed teachers are in a pool for up to 10 months while searching for a new position, and are terminated if they have not secured one within that timeframe.20 In Washington, D.C., teachers who are excessed have 60 days to find a new permanent position. Those who do not find a position and have unsatisfactory performance ratings are terminated, while those with satisfactory performance ratings are given the option to take a lump sum payment of $25,000, retire, or have an additional year to look for a position after which they would be terminated.21

In November 2018 the UFT contract will expire and another contract with additional raises will be negotiated. Since the terms of the ATR are in the contract, the City should use this round of negotiations to constrain, or preferably eliminate, the ATR.22 Time in the ATR should be capped at six months.24

By offering full pay, raises, step increases, and longevity increases, the ATR provides no incentive for unmotivated or unsuitable teachers to secure new permanent placements. The ATR should be a temporary stop, not an unlimited job guarantee.