How Bad Is It in New York City?

In May, Mayor Bill de Blasio released his administration’s affordable housing plan to create 200,000 affordable housing units over the next decade by building 80,000 new units and preserving 120,000 existing units.  It requires a $41.1 billion investment, including $8.2 billion in City funds.

The impressive scale of the plan reflects the seriousness of the problem. In the preceding months, the City and State Comptrollers released reports documenting the extensiveness of excessive housing cost burdens for New Yorkers, and the New York University Furman Center’s annual report on New York’s housing also highlighted the problem.1 The studies show many owners and renters face high housing cost burdens, but the problem is more frequent and more serious for renters.2

As New York City’s leaders seek to address the problem, it is instructive to ask whether New York is unique in the nature and scale of its housing affordability problem. A recent study by the Joint Center for Housing Studies of Harvard University found affordability has become more problematic across the country because household income has been nearly stagnant while rents have increased more rapidly than was previously typical.3

Is New York mirroring a national trend, or is the problem particularly acute here? To help answer the question, this policy brief analyzes data from 22 U.S. cities chosen because they are among the 15 largest by population or the central cities of the 15 largest metropolitan areas by population. The group ranges in size from New York City with 8.2 million people to Riverside, California with about 303,000 people in 2012.

The analysis indicates New York City has unique features, but is in the middle range of large cities by some indicators of the severity of the affordable housing problem:

As noted, affordability is a more salient issue for renters than for owners. Renters typically have lower income, likely making housing costs a bigger burden.4

Consequently, the larger the role rental housing plays in a city’s housing market, the more important affordability becomes as an issue. In New York City the issue is especially important because rental housing constitutes the bulk of the housing supply: the rental share of occupied housing units is 68.3 percent, greater than every other large city. (See Figure 1.) Second place Miami comes close with 67.7 percent. Seven of the 22 cities have a share below one-half, and Jacksonville is lowest with 40.1 percent. 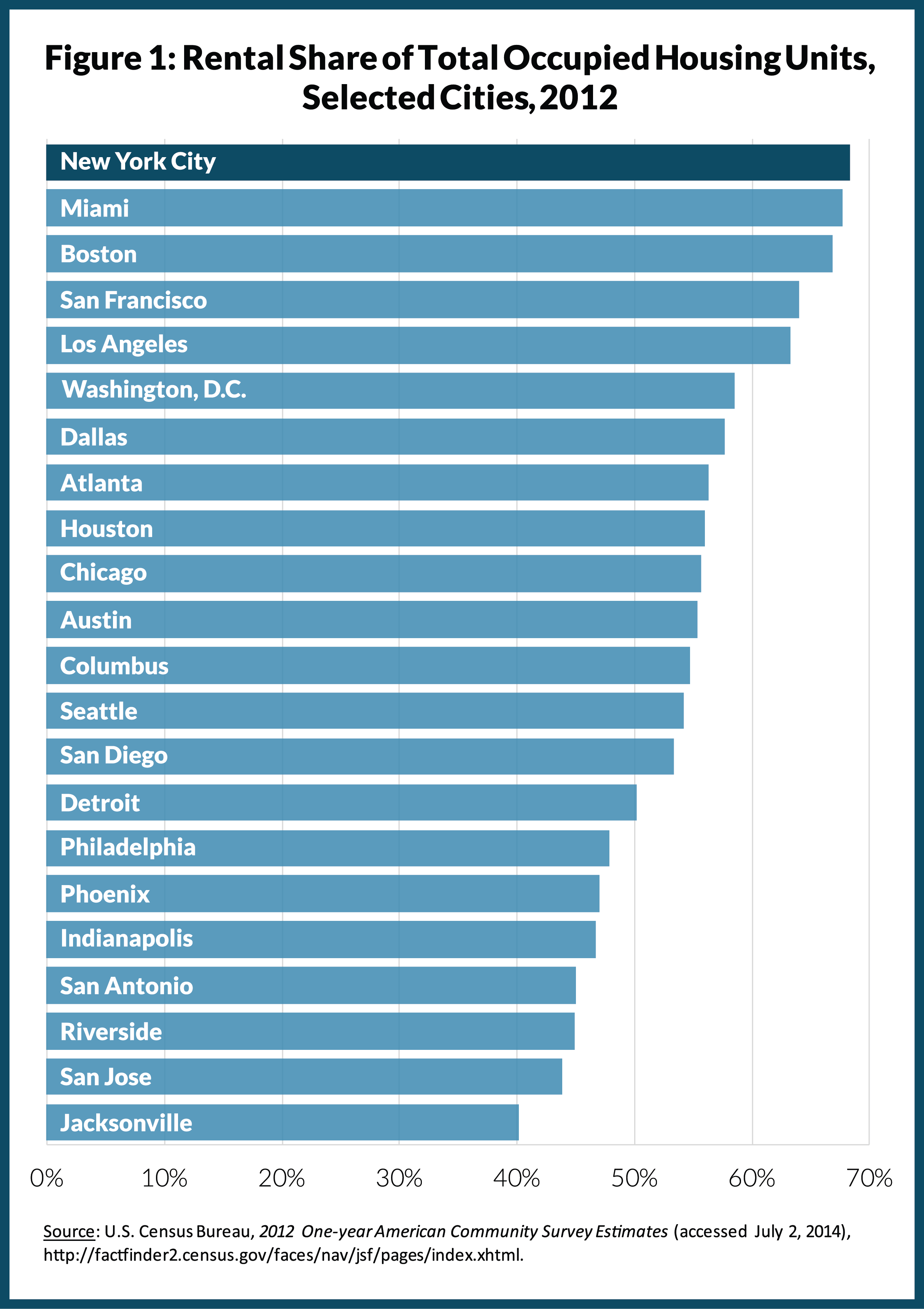 The logic of economics suggests that increasing the supply of housing can help to keep its cost down. Accordingly, a growing number of housing units can contribute to housing affordability in a city.

Between 2000 and 2012 the number of housing units in New York City increased 5.8 percent. (See Figure 2.) This growth was slower than all but three of the 22 large cities, and each of those three experienced population decline rather than population growth. This distinctive feature of New York City’s market suggests limited net additions to the supply is contributing to the affordability problem. The vacancy rate in New York City was 3.6 percent in 2012, below the 5 percent “emergency” level the City uses to justify rent regulation.5 The vacancy rate is further evidence of short supply contributing to affordability problems. 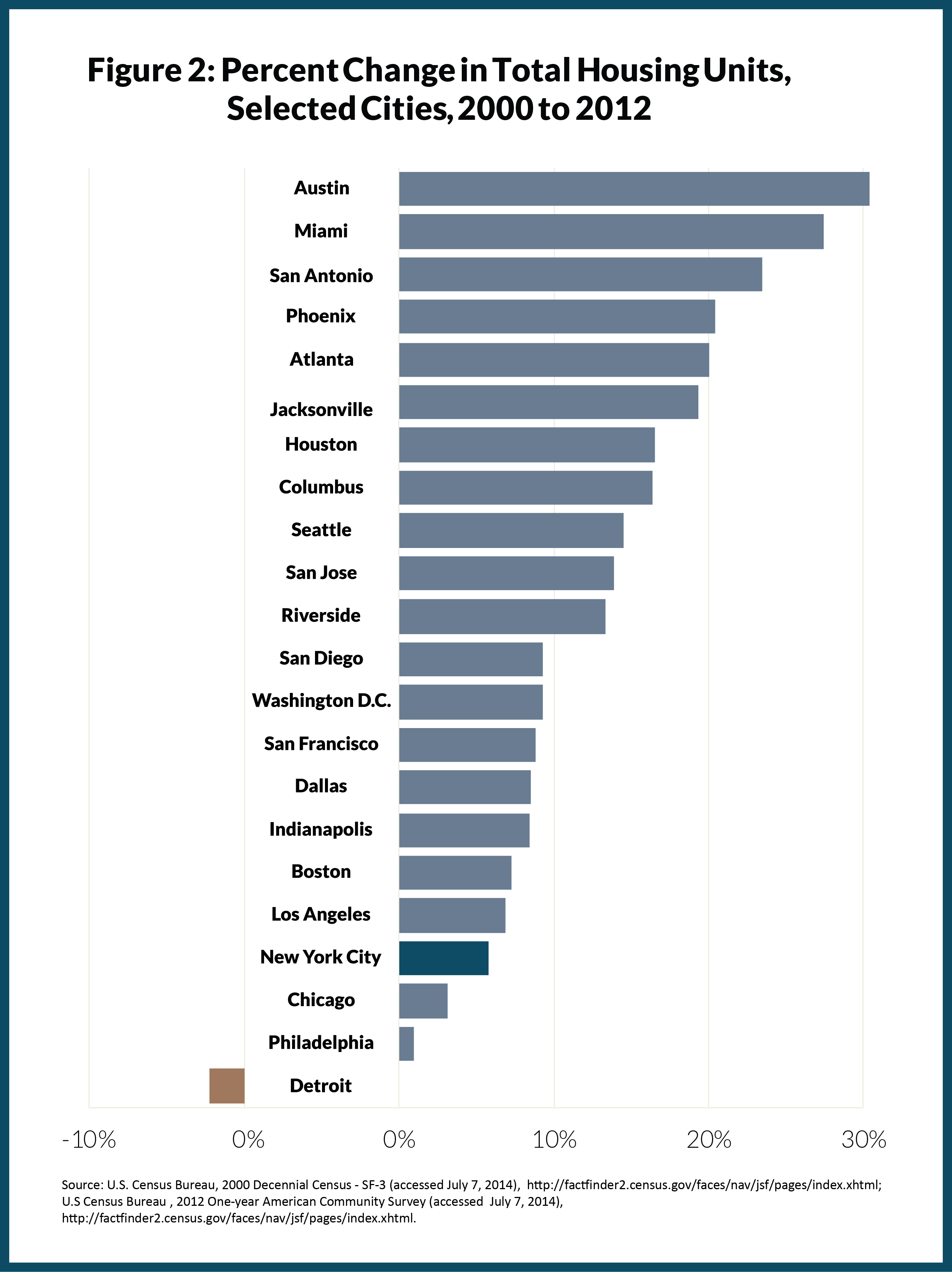 New York City Rents – High, But Not the Highest

In addition to median rent, another meaningful indicator of affordable housing is the share of rental units with rent under $1,000.8 By this measure New York City is the fourth worst city. (See Table 2.) San Jose, San Francisco, and San Diego in California each had a smaller share of units available for rent under $1,000. 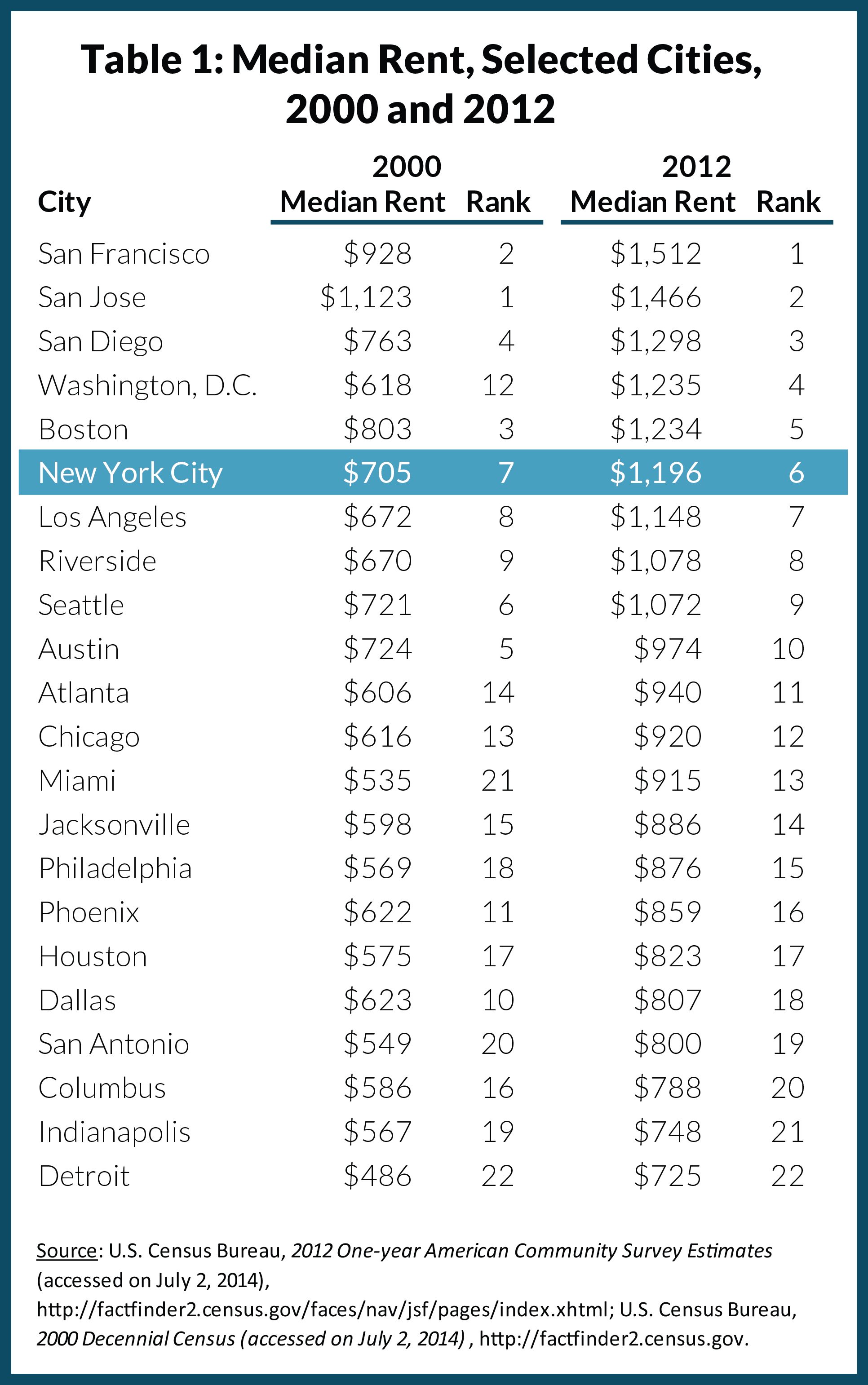 Rent Versus Income - Middle of the Pack

Gross rents indicate housing costs, but not affordability. Affordability is often assessed by comparing rental cost to household income. The U.S. Department of Housing and Urban Development’s (HUD) standard measure for housing affordability is 30 percent of income, with a ratio below 30 percent considered “affordable” and higher ratios considered burdensome.9

By this measure of affordability, New York City ranks as the ninth worst among the 22 selected cities. (See Table 3.)  In New York City 51 percent of rental households spend more than 30 percent of their income on housing; the share was highest in Miami at 62 percent with Los Angeles in second place at 59 percent.

Between 2000 and 2012 the share of rental households in New York City with unaffordable housing increased from 41 percent to 51 percent. Despite the adverse trend New York City shifted from eighth worst to ninth worst among the 22 cities. The news was bad in all cities; all 22 experienced an increase in the share of rental households with unaffordable housing. 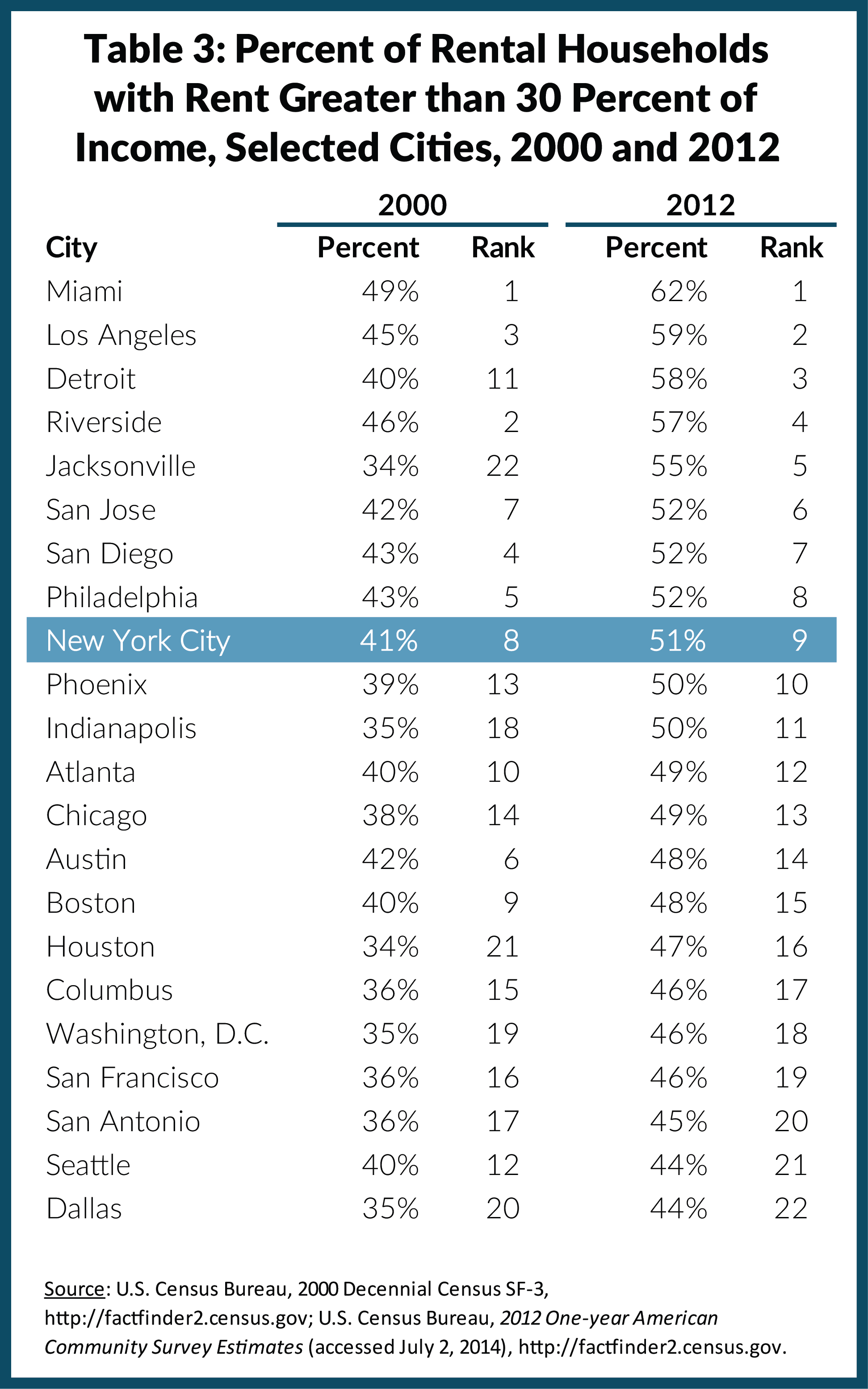 New Yorkers tend to think of themselves and their city as unique. With respect to affordable housing, this view is only partly true. New York City’s rental market is unique in its large role in the total housing market, and New York City’s housing supply is growing more slowly than in other thriving cities. But despite popular impressions, New York City’s rents are not the highest in the nation. Although the share of households with excessive rent burdens is high in New York, the situation is worse in eight other large cities.

The CBC’s recent work on competitiveness highlighted housing costs as a risk for New York City’s attractiveness as a place to live.  The comparative data put the local problem in perspective nationally, and the data suggest policy solutions that increase development and the supply of housing are appropriate. The findings here also raise other questions regarding New York City’s competitiveness; do location-based costs like transportation change the affordability equation? This question is examined in our next policy brief in the series.

The Affordable Housing Crisis: How Bad Is It in New York City?