A Big Aid Increase for Schools

Last night the state aid allocations for school districts were released just in time for the State Senate to vote on the budget. The final agreement allocates $20.8 billion, approximately $7,700 per student, in formula-based school aid for school year 2014. This represents an increase of $937 million, or 4.7%, over school year 2013. (See Table 1.) This total does not include to-be-allocated competitive grants and about $300 million in assorted programmatic grants. Including those funds, next year’s school aid increase may be closer to $1.1 billion, or 5.3%.

The largest additions to the Executive proposal were $171 million to Foundation Aid and $196 million to the Gap Elimination Adjustment (GEA) restoration, which both allocate funding according to formulas that were tweaked in the bills the Senate passed.  Although the Foundation Aid changes may steer more money to the needier districts, the changes in the GEA formulas may work against targeted restoration because they include a minimum increase of $100,000 for all districts regardless of their change in wealth or need. In addition the distribution will be distorted by a $69 million addition to High Tax Aid, which benefits many wealthier districts. The Executive had proposed cutting High Tax Aid by 24% from $205 million to $155 million and restructuring its distribution, but the Legislature rejected the proposal. Instead they increased High Tax Aid by 9% to $223 million and inserted a hold harmless provision that prevents any district from receiving less than it did in prior years. Outside of formula-based school aid, about $11 million was also added in specific appropriations for over 100 school districts; more than two-thirds are located in Hudson Valley and Long Island. Some of the districts singled out for line item grants are among the wealthiest in the state, such as Great Neck and Bronxville.

When the data is available in electronic form CBC will release a more detailed analysis of the aid distribution and post an interactive map of the increases by school district. 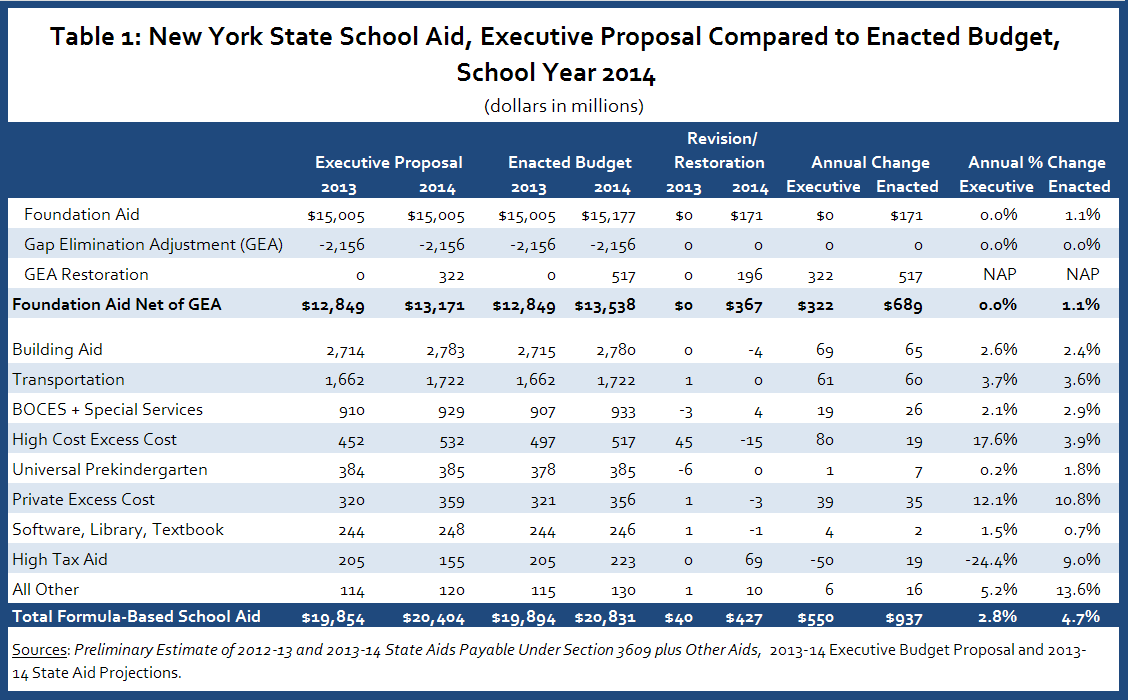