Breaking Down the Amazon HQ2 Deal:

The announcement that Amazon has chosen Long Island City, Queens, as one of two locations for its planned HQ2 project has generated much attention. Amazon has committed to creating 25,000 full-time high-paying jobs over ten years; investing approximately $2.5 billion; and building 4 million square feet of office space, with the possibility of expanding to 8 million square feet and 40,000 jobs. The location will serve as one of three headquarters of the company, along with Seattle, Washington, and Arlington, Virginia.

The state has indicated Amazon can receive up to $1.2 billion in Excelsior tax credits over a ten-year period. This consists of two fully refundable tax credits. The first credit, the Excelsior Job Growth Tax Credit, is equal to 6.85 percent of gross wages for each net new full-time job.1 The second credit, the Excelsior Investment Tax Credit, is equal to 2 percent of qualified investments that meet a 10:1 benefit-cost threshold and generate new wages.2

The Excelsior program is targeted to particular industries, including software development, life sciences, back office services, and manufacturing. Firms must meet a minimum job creation threshold in each industry to be eligible for the program, and ESD reviews each application, considering criteria including how the project fits with regional economic development strategies and the likelihood of project completion.3

ESD’s incentive proposal to Amazon states that to earn the maximum credits, Amazon must employ 25,000 net new full-time employees at the project site by June 30, 2028, with this employment maintained through January 1, 2029, and make qualifying capital investments of $2.3 billion through 2028.4 The preliminary schedule of benefits indicates that Amazon could receive a maximum of $1,153,920,000 in job growth credits and $46,080,000 in investment credits over the 2019-2028 period, totaling $1.2 billion. (See Table 1.)

To claim either of its Excelsior credits, Amazon will have to submit an annual performance report showing the number of jobs that it has created and the investment it has made that year. The tax credits awarded will be proportional to the actual performance achieved. If in any year Amazon creates less than 75 percent of the net new jobs projected in the preliminary schedule of benefits, it will not receive any job growth credits that year.5 If Amazon exceeds the commitments in the preliminary schedule of benefits, it will not receive additional credits. The performance-based design of the Excelsior program ensures that the state does not pay benefits up front for job growth that never happens; benefits are awarded only based on actual results.

State law currently caps Excelsior benefits for 2019 at $183 million, decreasing to $133 million in 2022, $83 million in 2023, and $36 million in 2024. Assuming Amazon meets its job targets, the State Legislature would need to approve an extension of Excelsior that increases the caps.

Unlike the Excelsior tax credits, the capital grant to be provided by Empire State Development (ESD) is fully discretionary. The grant will reimburse Amazon for capital costs of office build out at $75 per square foot, up to a maximum of $480 million, and costs of site preparation and infrastructure improvements up to a maximum of $25 million, for a total of $505 million.6 It will be paid over a period of up to 15 years.

The incentive proposal includes a schedule of grant disbursement that ties it to the same cumulative job creation and annual investment commitments as the Excelsior credits. If Amazon creates 25,000 jobs the capital grant can reach a maximum of $325 million. If job creation reaches 40,000 by 2033, an additional $180 million will be available, bringing the total to $505 million. (See Table 1.) 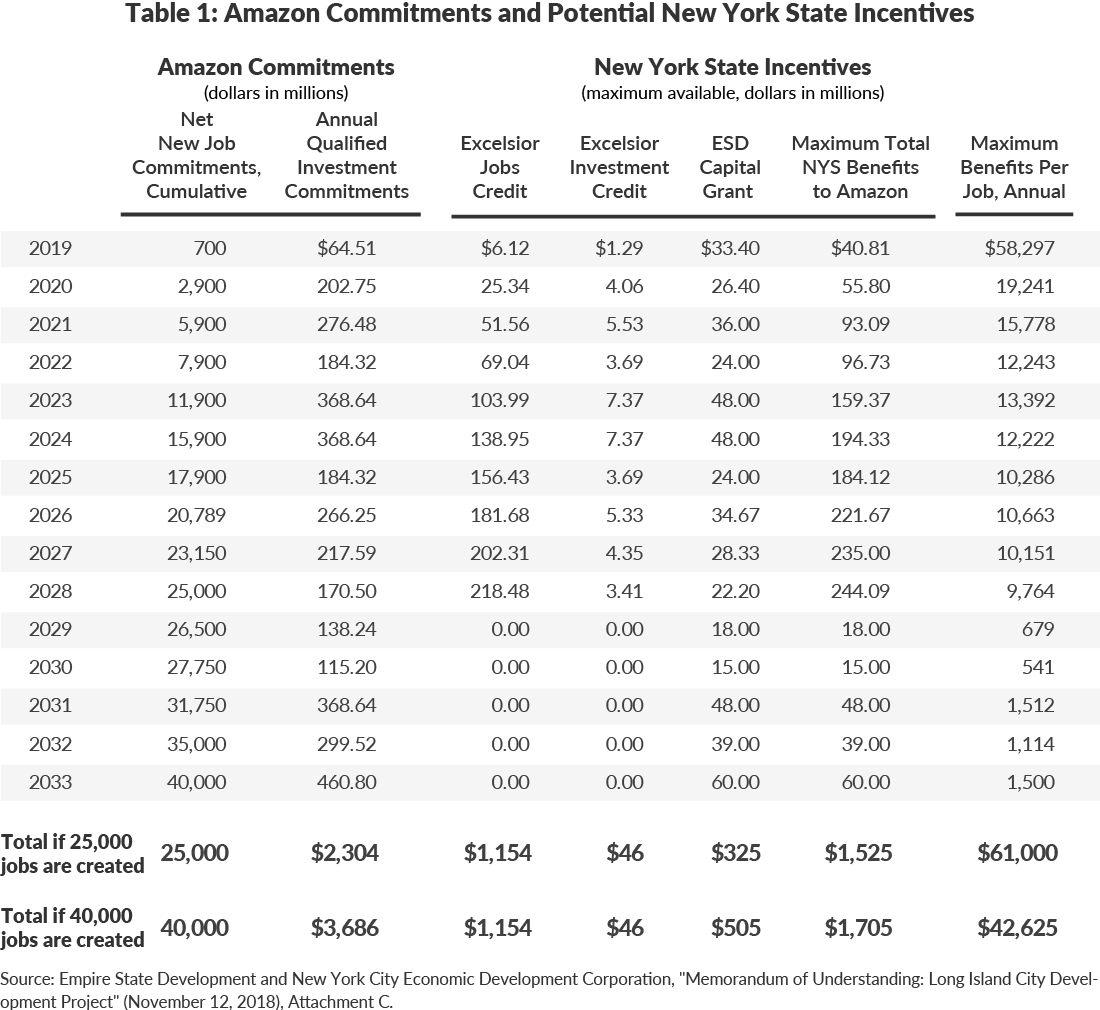 ESD will disburse the capital grant as long as Amazon meets its full annual investment commitment and 85 percent of its cumulative net new jobs commitment for that year. If Amazon falls short of the scheduled job commitment targets, ESD will withhold the grant funds until Amazon meets the thresholds. If total net new jobs at the project in any year fall below the amount required for either of the previous two years, ESD can recapture the grant funds disbursed for those two previous years.7

Funds for this grant are likely to come from one of a number of flexible sources of capital funds that do not require legislative approval. For example, the State and Municipal Facilities Program (SAM), which grew by $475 million in the Fiscal Year 2019 budget, can be used for a wide range of projects, including economic development, at the discretion of the governor and legislative leaders, through the Public Authorities Control Board.

The final major element of the state’s incentive proposal is that it will be subject to a general project plan rather than the city’s usual land use process, the Uniform Land Use Review Procedure (ULURP). This gives the state the authority to approve a land use plan without needing to secure City Council approval for a rezoning. In recent years, this process was used for development of Atlantic Yards, Brooklyn Bridge Park, and redevelopment in Times Square.8

In addition to the state incentives spelled out in the incentive proposal, Amazon is eligible for two pre-existing as-of-right city tax expenditures. Firms receive these benefits by meeting the criteria specified in state statutes.

ICAP provides property-tax abatements lasting up to 25 years for industrial and commercial buildings that are built, expanded, or modernized. New commercial construction is eligible anywhere except in Manhattan between 96th Street to the north and Murray Street, Frankfort Street, and Dover Street to the south.9 Selected areas of the city are eligible for additional benefits, but the Amazon development site is not in one of these areas.

The abatement schedule varies depending on whether a project is industrial or commercial, the portion of the building used for retail purposes, and whether the project is in a designated special ICAP area. The Amazon project, a commercial project not located in a special area, would be eligible for a 100 percent abatement for 11 years, which then phases out over the following four years.11 The City estimates that the abatement will total $386 million.12

The REAP credit is available to businesses that relocate from outside New York City to Lower or Upper Manhattan or the other boroughs and make property improvements worth more than 50 percent of the property’s assessed value. The credit is worth $1,000 for 12 years per eligible full-time employee. Firms that relocate to “revitalization areas,” which includes Amazon’s site in Long Island City, qualify for a more generous credit of $3,000 for 12 years per eligible full-time employee.13 Revitalization areas are those parts of the city zoned for manufacturing or specific commercial uses. Recipients must be certified annually to determine the amount of credit they can claim. The credit is refundable for the first five years, including the year of relocation. In subsequent years, unused credits may be carried forward for up to five years.14

Using the schedule of job creation commitments associated with the Excelsior Job Program credits, the potential total REAP credit by 2039 is $900 million, assuming the creation of 25,000 jobs. (See Table 2.) If Amazon creates 40,000 jobs, the total REAP credit could reach $1.44 billion. 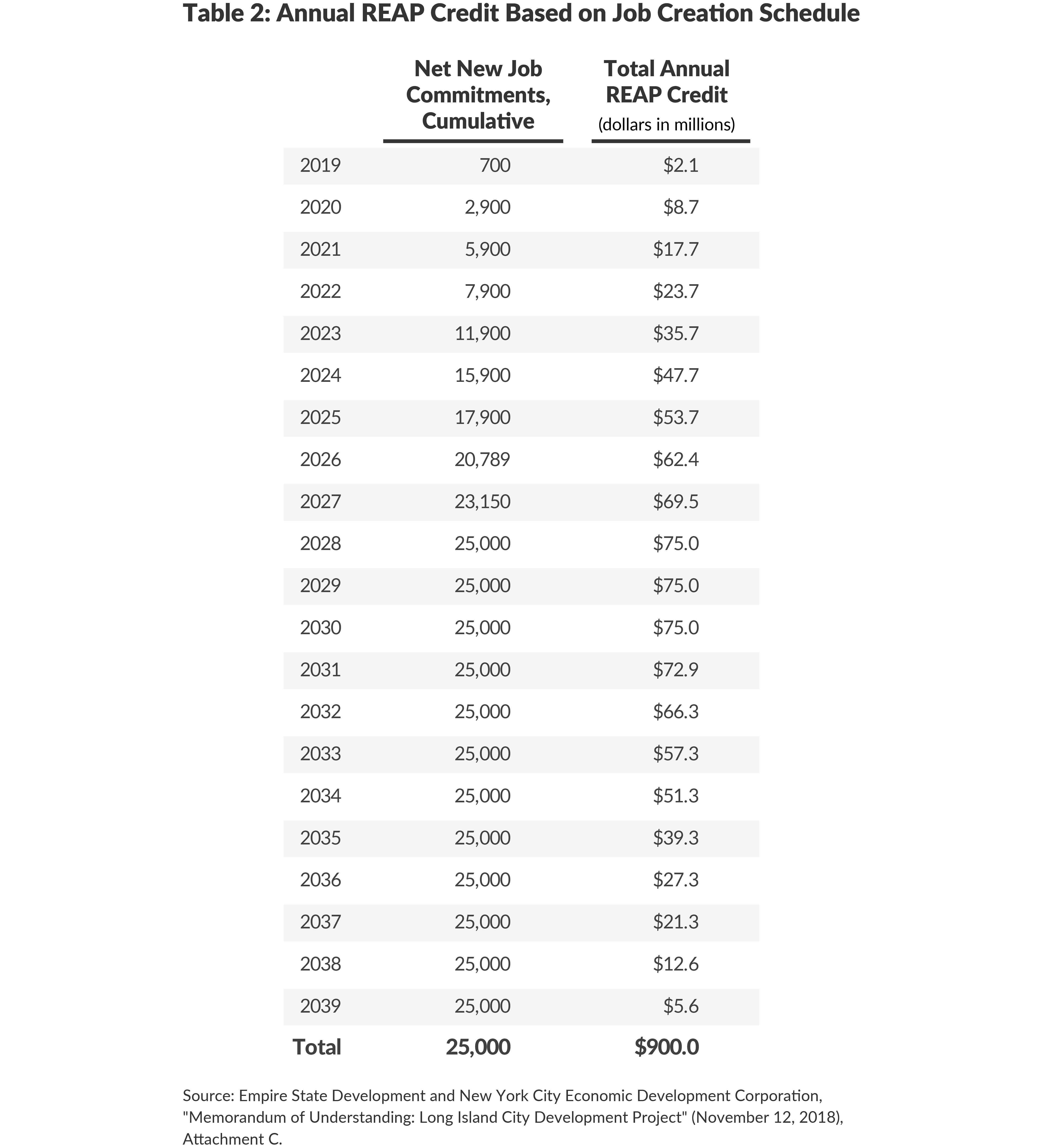 For all of the sites that are part of the development, Amazon must make payments in lieu of property taxes (PILOTs). The PILOTs will be equal to the amount of taxes that would be due if the land were not tax exempt, minus the amount of any applicable as-of-right property tax abatements, such as those under ICAP.15 As a result, for the first 11 years the PILOT will be equivalent to the property tax due only on 115 percent of the initial assessed value of the property, excluding the assessed value of improvements Amazon makes.16 As ICAP phases out, the PILOT will increase to apply to the assessed value of the improvements made by Amazon.

The PILOT funds will go to ESD, which will place at least half of the funds related to the previously city-owned sites into an Infrastructure Fund to be held by the New York City Economic Development Corporation (NYCEDC). The remainder of the funds will be transferred to the city’s general fund, as they would if they were regular property tax payments. NYCEDC will use the Infrastructure Fund for improvements outside of the development site itself but within a yet to be determined area within Long Island City.17

In addition, City officials also had previously announced $180 million in capital funding for improvements to sewer and water systems, construction of a new school, street reconstruction, and open space improvements in the neighborhood.18 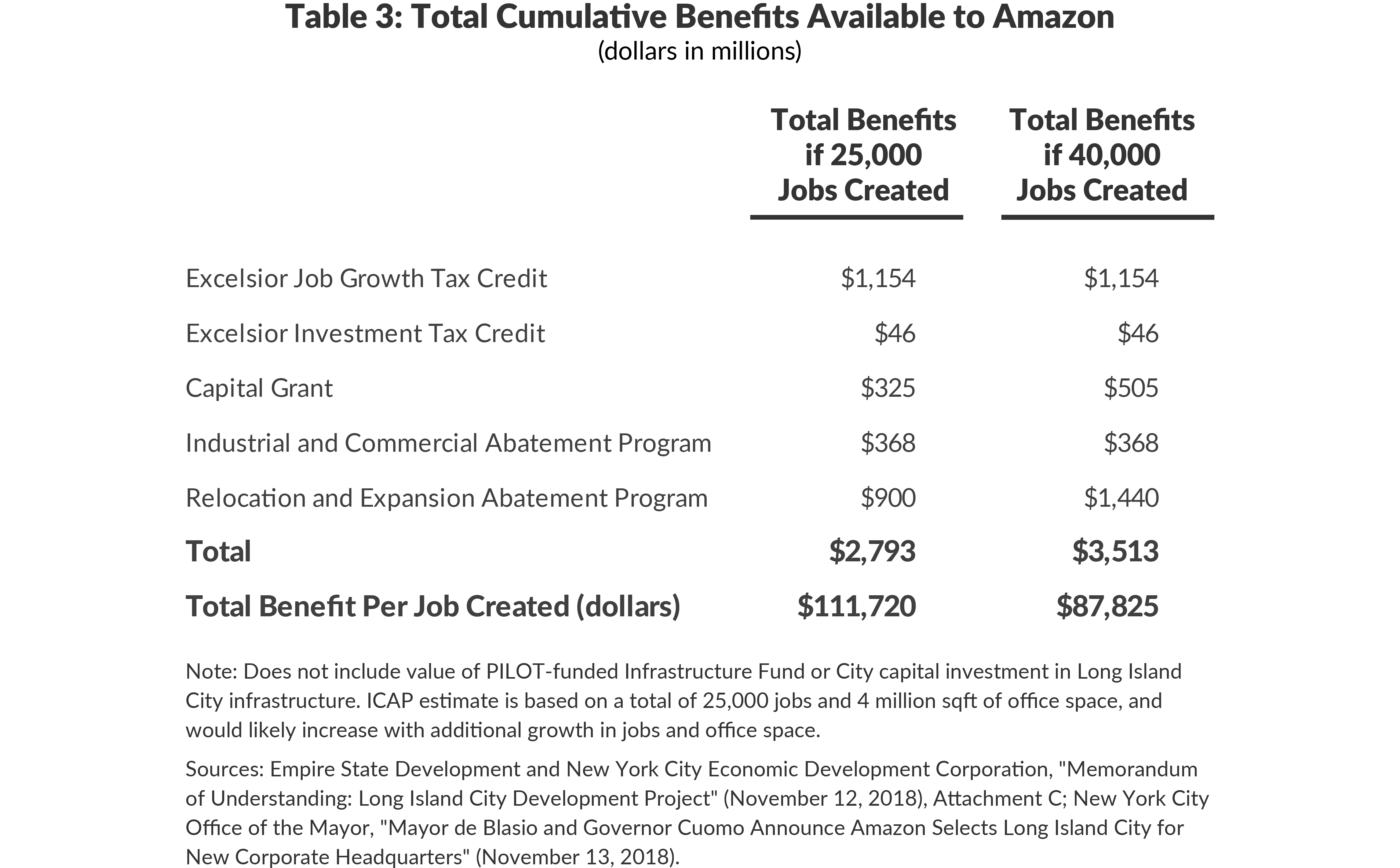 The presence of Amazon’s HQ2 will support New York City’s economic development goal of growing the technology sector to create well-paying jobs and diversify away from financial services. It will provide tax revenue to the city and state and power growth for the regional economy. Nevertheless, this deal highlights a number of weaknesses in the City and State’s approach to economic development.