Today is April 1 and the State has a budget in place to begin the fiscal year, a relatively rare occurrence and a good one. Governor Cuomo and the legislative leaders deserve credit for crafting a budget that is not only on time but fiscally responsible as well. One of the largest and most contentious areas was school aid, where the Governor proposed $1.5 billion in school year to school year cuts. An analysis of the impact by district wealth shows that the restorations retrenched from the targeted approach of the Governor’s original proposal. In addition, if school districts still have aid remaining from the federal Education Jobs Fund program, the magnitude of the cuts will be much less than what was originally projected.

The changes to the school aid formulas made in the final budget deal “leveled” out the Governor’s original proposal, which had been targeted so that the percent cut generally increased as the wealth of the district increased. The restorations in the enacted budget on a per pupil basis indicate that the need-based targeting was undermined. The average restoration per pupil statewide amounts to $67, but the amounts are nearly twice that at $109 and $110 per pupil, in the middle of the wealth distribution. (See Figure 1.)

In this budget almost all of the neediest school districts could have been spared, but they were not.  In fact, the wealthier districts will get back a greater percentage of their aid in the final distribution than the poorer ones. The top two wealthiest deciles of districts will get back 2.3 percent and 2.1 percent of their State aid, while at the other end of the spectrum the poorest two deciles will see 0.8 and 0.7 percent of their aid restored. (See Figure 2.) 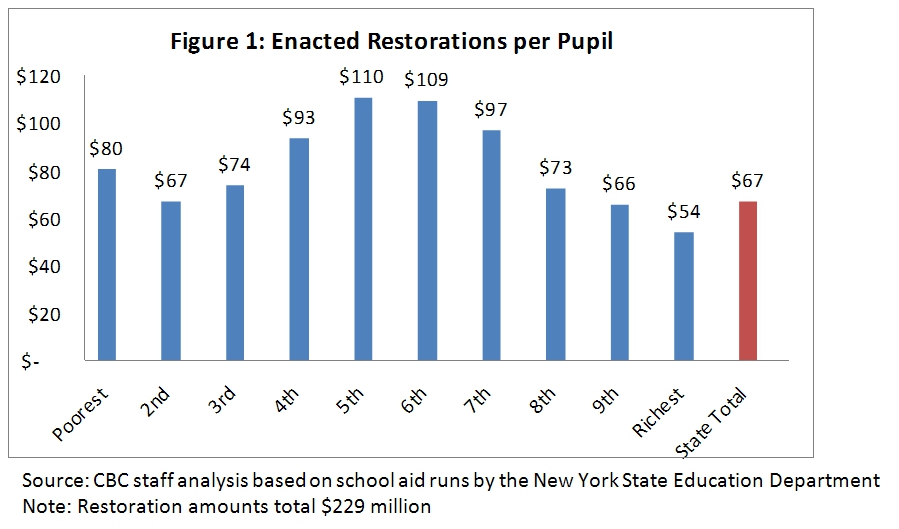 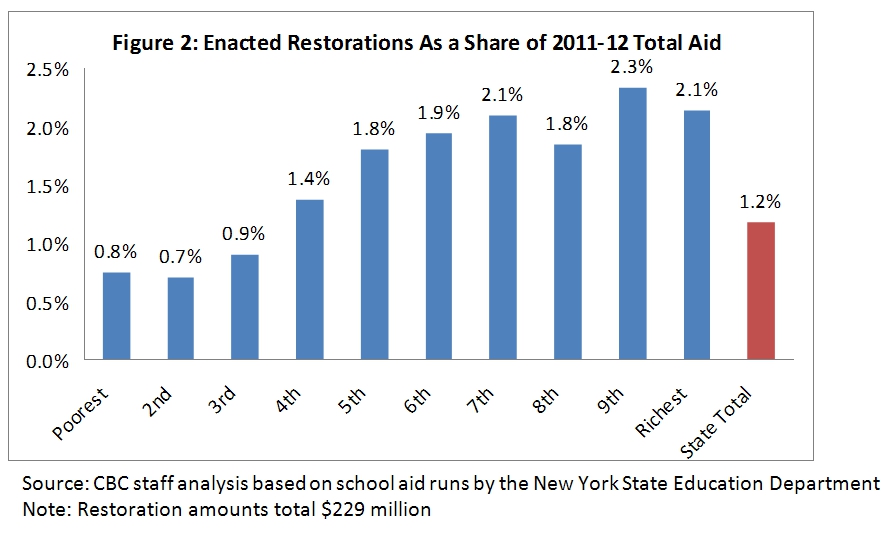 School aid cuts were necessary this year to help close a $10 billion budget gap, but unfortunately they will not be implemented in a way that does the least harm to the schools and students that are the most dependent on State support. If the State can no longer keep the promises it made to radically increase school aid when it revised the foundation aid formula in 2007, then the basic formulas by which school aid is distributed should be reopened to improve their targeting.

In terms of total aid reductions, the school aid runs released as the budget was enacted show cuts that range from 1.4 percent in the poorest 10 percent of districts to 5.8 percent for the wealthiest 10 percent. (See Figure 3.) These cuts are much less than what was shown in the school aid runs produced with the Executive Budget, which ranged from four percent in the poorest 10 percent of districts to 12.5 in the wealthiest 10 percent. The comparison shows that on average, the school district cuts were reduced by 40 to 50 percent. If the restorations were only $229 million, how can they reduce school district cuts by so much? The difference is federal aid of $608 million, which is not included in the enacted budget school aid totals for school year 2010-11, lowering the starting point for the cuts from $20.7 billion to $20.1 billion and nearly halving the percentage reduction. 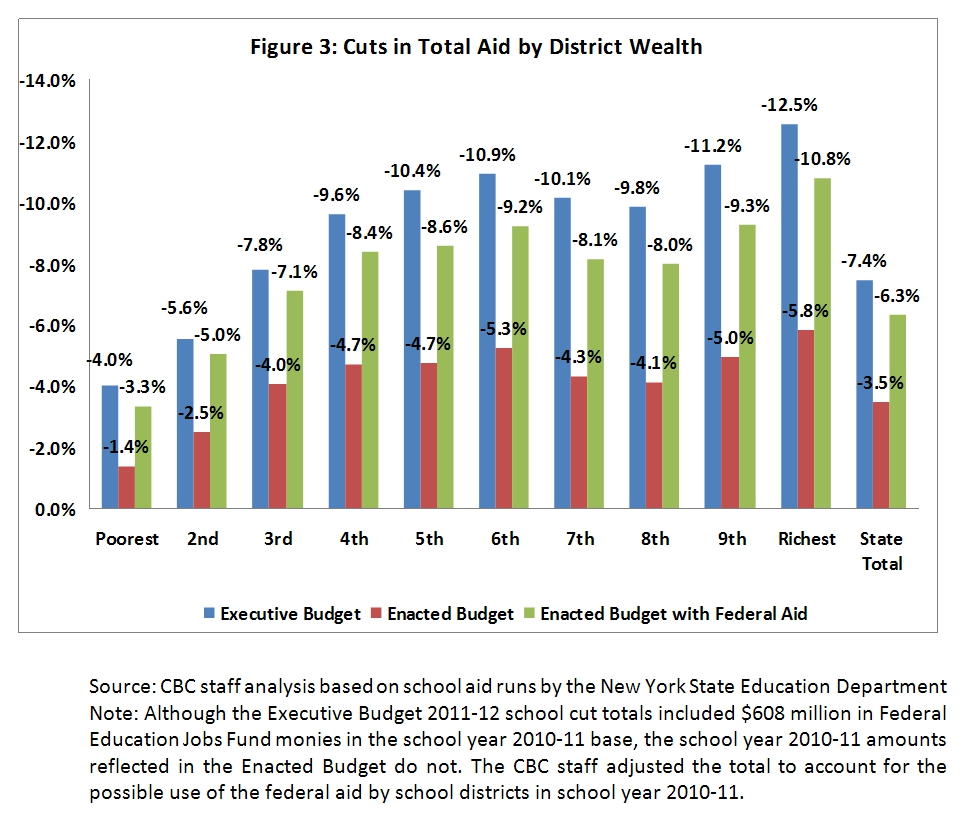 To the extent districts retained some or all of their Federal Education Jobs Fund money for use in the school year 2011-12, the real impact of the cuts will be much less than originally presented in the Executive Budget. However, for districts that spent the federal funds, as did New York City, the magnitude of the State aid cut is much higher and closer to the original cut proposed by the Governor. If all districts spent the federal funds in school year 2010-11, the cuts would average 6.3 percent; if all of the federal money is still available, the cuts average 3.5 percent.

Whatever the ultimate size of the cuts, school aid remains the single largest expenditure in the budget, comprising nearly one-quarter of State operating funds. Its main goal is to address the great disparities in local districts’ wealth and capacities to fund their schools. Now that the budget is completed lawmakers should undertake a serious examination of how best to achieve sustainable and equitable allocations going forward.