Competitive grants are an important element in Governor Andrew Cuomo’s approach to state aid for education. Designating funds to be given to school districts based on competitive applications rather than based on a formula incorporating student characteristics and district wealth is intended to stimulate innovation and reward excellence. The new approach began on a small scale last year, and in this year’s Executive Budget Governor Cuomo proposes expanding it. A review of the experience in the first year suggests the proposed expansion may be premature, and the new money might be allocated more effectively using other strategies.

The fiscal year 2013-14 Executive Budget proposes a $21.1 billion school aid package, an increase of $888 million or 4.4 percent from the prior year. The proposal calls for $13.2 billion in operating aid to be distributed through formulas that measure need and $7.5 billion in aid that is reimbursement for various qualified expenses such as transportation and building projects. A “fiscal stabilization” fund of $203 million is also proposed, with the allocation of that money unspecified. Finally, competitive grant programs have been proposed at a total cost of $175 million. 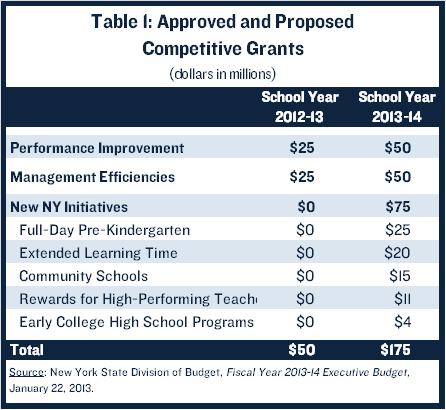 An examination of the two rounds of competitive grants awarded in 2012 can inform the Legislature’s deliberations over the Governor’s new proposal. It may be too early to reach definitive conclusions, but the experience raises questions about the efficacy of this method of distributing school aid.

School District Performance Improvement Grants. The initial School District Performance Improvement Competitive Grant program was funded with $75 million over three years with the maximum each year $25 million, contingent on availability. The grants are for school districts that “have demonstrated the most success in increasing student performance, narrowing the achievement gap, and increasing academic performance among students with the greatest educational needs, and have submitted a high quality plan that shows the most promise of building upon this success.”[1]  Applications for school year 2012-13 were due originally by January 13, 2012, but the deadline was extended to February 10, 2012 to give school districts more time.

The applications were scored on a 115-point scale. Evidence of district academic performance and the satisfactory completion of a Budget Form and Budget Narrative could be scored with up to 70 points. The priority area programs for which districts could receive up to 35 points were: 1) middle school programs; 2) college level or early college programs; 3) increased college admission rates to be measured by graduation with an Advanced Designation Regents Diploma; and 4) career and technical education programs. District need added up to 10 points. Districts were also required to submit a new teacher and principal evaluation system plan (an “annual professional performance review” or APPR) compliant with statutory requirements and the Commissioner’s Regulations by July 1, 2012 and receive State Education Department (SED) approval by September 1, 2012. The amounts available for a district were capped according to enrollment. For example, districts with enrollment of 100,000 or more could apply for up to $10 million, districts with enrollment from 17,500 to 99,999 could apply for up to $1.5 million, and districts with enrollment from 7,500 to 17,499 could apply for up to $1.2 million. The limit for the smallest districts with enrollment below 750 students was $100,000. (See Table 2.) 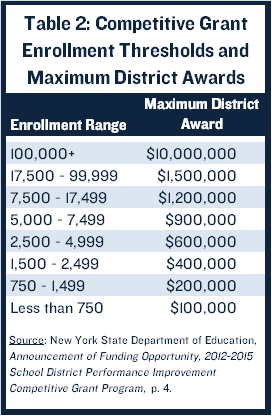 By the close of the application period SED had received 74 applications for performance improvement grants. Twenty-two applications were disqualified and not reviewed because the district’s index and need scores would not have allowed them to reach the minimum threshold to be eligible for an award. Of the remaining 52 applications evaluated by external peer reviewers, 28 were selected for awards. Four of these were later disqualified because they failed to meet the July 1 and September 1 deadlines for APPR.[2] The qualifying 24 districts received grants ranging from $74,155 for the Morris Central School District to $1.5 million for the Rochester City School District. (See Table 3.) Of the $25 million available for this initiative, grants awarded totaled $10.2 million. The highest amount awarded on a per pupil basis was $263 for the Solvay Central School District and the lowest per pupil award of $45 was to the Rochester City School District.[3] The average award per pupil was $103. As a share of districts statewide the winners comprised 3.4 percent.[4] The share of pupils statewide that benefit from the grants is 3.6 percent. Without the relatively large district of Rochester about 2.3 percent of pupils in New York benefit. 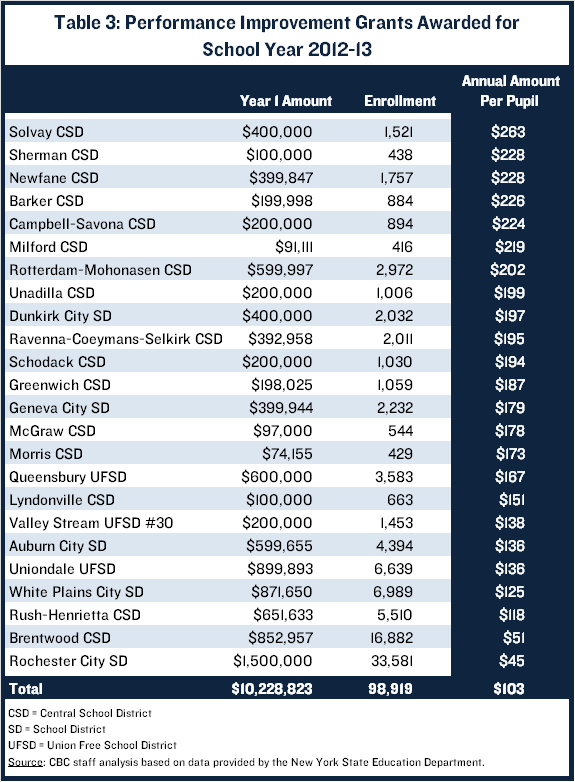 Also relevant is the distribution of awards by a need-resource index, a measure of student need and district ability to pay that includes poverty rates, property and income wealth, and other resource considerations such as special education status and English language proficiency. Figure 1 shows the grant applicants’ and awardees’ decile on this index – the neediest 10 percent of districts relative to required resources are included in the 1st decile as high-need districts; at the other end of the spectrum the districts with the greatest capacity relative to required resources are in the 10th decile as low-need districts. Of the 24 districts that won awards, 17 were from the needier end of the distribution – four grants were awarded in highest need decile, five in the 2nd, six in the 3rd, and two in the 4th. Fourteen of the 22 districts that applied for awards and were disqualified for failure meet the minimum score were in the 7th, 8th, 9th and lowest-need deciles. 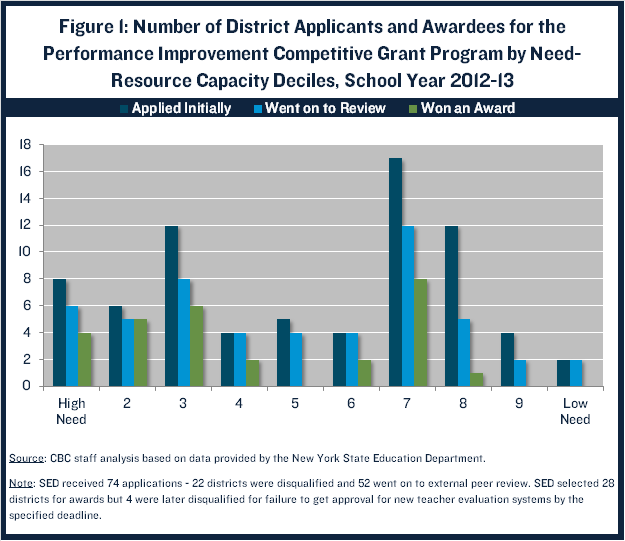 School District Management Efficiency Grants. The School District Management Efficiency Competitive Grants program was also funded with an appropriation of $25 million annually for three years. The program recognizes districts that in the past two years “implemented a program to improve the overall efficiency of management operations and have documented quantifiable savings that are expected to result in sustainable savings in future years.”[5] Groups of school districts could apply for joint ventures. Three core areas were priorities for funding: 1) the administrative component of school district budgets; 2) the operation of pupil transportation services and purchase of transportation capital; and 3) non-personal service expenditures. Preference was given to projects that were innovative, had the participation of the school community, could be replicated by other districts, and produced recurring value.

Applications were due by June 6, 2012 and awards were made in October 2012. The core of the application was a narrative, limited to 25 pages of 12-point font, which described the changes undertaken by the district. Districts could receive up to 100 points; 40 points for the cost savings narrative, 20 points for “innovation, replicability, and maintenance of student achievement,” and 20 points for sustainability and stakeholder involvement.[6] Although districts were not required to have approved APPR systems to be eligible, 20 points could be given to any district documenting that its APPR had been approved by September 1, 2012. A minimum score of 70 was required to receive an award. Grant amounts were limited by enrollment according to the same tiers used for the performance improvement grants. (Refer to Table 2.)

SED received 38 applications for management efficiency grants, and 36 were reviewed. Two applicants – Katonah-Lewisboro Union Free School District and East Greenbush Central School District – were disqualified for ineligible savings and unacceptable coding on the application. Of the 36 reviewed, 16 were awarded funding. Eleven of the 20 that did not qualify failed to meet the APPR approval deadline and thus were not awarded the 20 bonus points, and nine were not selected because although they had an approved APPR plan by September 1, 2012 and received the 20 bonus points, they failed to reach the minimum score required to be eligible for an award. The winning districts received $7.1 million in grants ranging from $48,787 for Cheektowaga to $1,500,000 for the Rochester. (See Table 4.) The largest grant on a per pupil basis was $124 per pupil for Kenmore-Tonawanda. The average grant per pupil was $63. As a share of districts statewide, winning districts comprised 2.3 percent.[7]

The distribution of applicants and awards by need-resource index slightly favors the districts in the more affluent deciles. Of the 38 applications 22 came from districts in the 6th, 7th, 8th, 9th, and lowest-need deciles, and 9 of the 16 winners were selected from this group. (See Figure 2.) 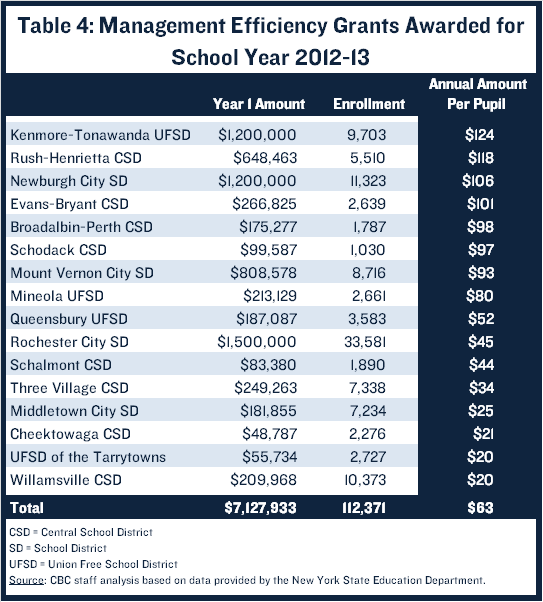 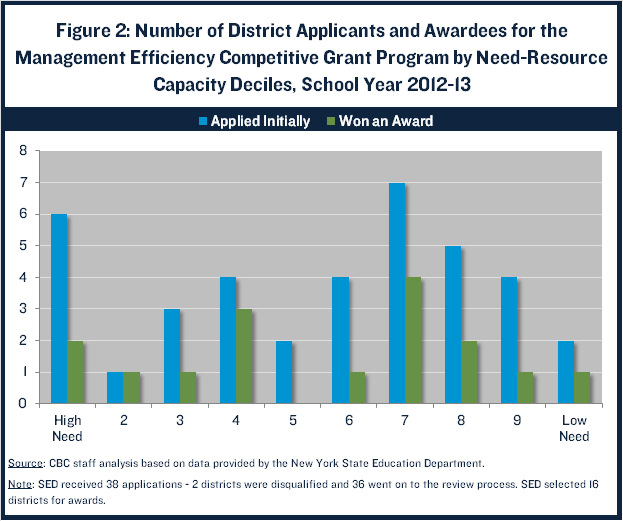 Based upon the first two rounds of awards, competitive grants have limited impact. Few districts apply and even fewer receive funds.[8] The caps on amounts of awards by district size distort the per pupil benefits of winning; per pupil awards have been as low as $20.  To date, just $17 million of a $50 million pool has been awarded.

The current budget proposal to expand the funds available for the existing programs and to add $75 million to fund five additional competitive grant programs is unlikely to produce significantly different outcomes. Districts will find it confusing to distinguish between the various programs and are unlikely to apply when only small sums per student are available. The preferable method for distributing school aid is to target it through aid formulas that measure student need and district ability to pay. If specific programs recommended by the New NY Education Reform Commission are deemed key to improving New York’s education system, then they should be funded categorically and systematically in the districts – and for the students - that most need them.

[2] New York City, which would have qualified for the largest award, was among the four districts that won a grant but did not receive it because its application for approval of a new teacher evaluation system was not submitted by the deadline. The other disqualified districts were Beaver River, Galway and Vestal.

[4] According to the New York State Education Department there are 696 school districts in New York of which 24 received grants for school year 2013-14. Total enrollment in the 2012 -13 school year is estimated to be 2.8 million.

[8] It is possible more districts, having fulfilled the APPR plan requirement, will apply in the next round.