Controlling the Cost of New York City’s Settlements and Judgments: A Tale of Two Agencies

New York City Comptroller Scott Stringer recently issued a report introducing an important new tool: ClaimStat.  The innovation is a data-based method for analyzing judgments and claims against the City of New York in order to identify ways to reduce their cost.   Settlements and claims are a significant expense, $674 million in the fiscal year 2015 budget.

The report provides some insight into how to reduce the cost of these claims by permitting a comparison of the experience of two agencies – the Health and Hospitals Corporation (HHC) and the New York Police Department (NYPD). The two have the highest settlement and judgment costs of all agencies, and together were responsible for 54 percent of total settlements and judgments in fiscal year 2013. But the trend for each agency differs markedly, with the NYPD generating generally increasing costs while HHC reversed its rising costs and achieved significantly lower costs in recent years. The contrast sheds some light on how costs might be reduced at other agencies in addition to HHC. 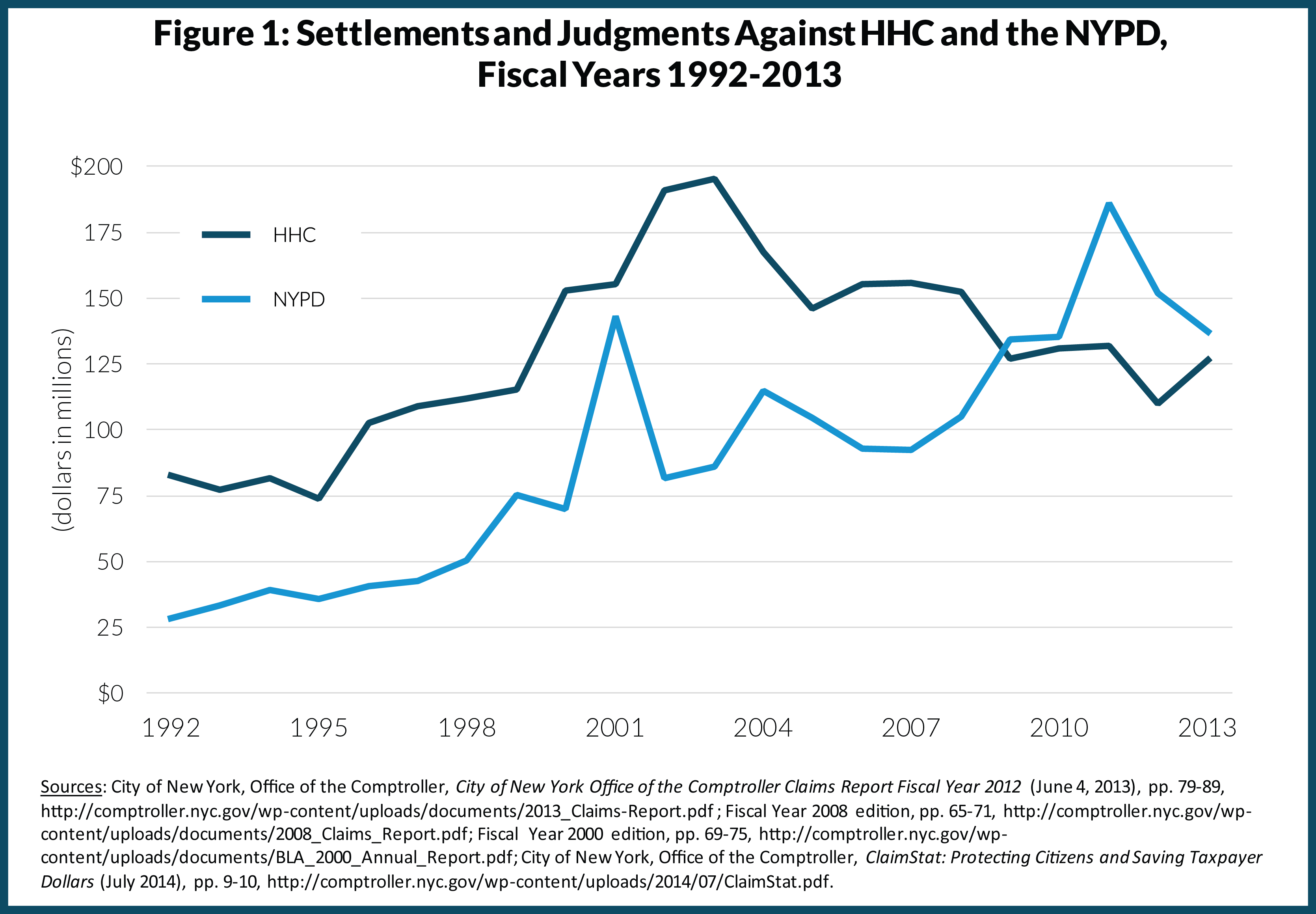 What accounts for the difference? The Comptroller suggests it is a switch in policy under which HHC became responsible for its malpractice costs, while the NYPD and other agencies continue to have their settlements paid from a central account outside their agency budgets and not viewed as part of the Commissioner’s responsibility. Prior to fiscal year 2002, the City of New York was responsible for HHC’s  malpractice claims; in 2002 HHC and the City agreed HHC would be responsible for  malpractice claims up to a maximum amount set by the Office of Management and Budget, and the City would cover the costs of HHC’s debt service.  The swap provided HHC with the incentive to confront the growing costs of judgments and claims. In February 2002 HHC contracted with the Caronia Corporation to analyze claims against HHC and to assist with risk management.[2]  In 2006 HHC created its own Law and Claims Department, which took over malpractice cases from the New York City Corporation Counsel.[3]  The Law and Claims Department attempts to reduce the number of claims and to act quickly on claims, assessing which should be settled and which should be litigated in order to decrease payments.  HHC also implemented initiatives to improve safety and to eliminate errors including infection prevention measures, pharmacy robots, electronic medical records, and automated medication administration.[4]

In contrast, since fiscal year 2010 the NYPD has had the highest payouts of settlements and judgments of any city agency, totaling $137.2 million in fiscal year 2013.   The Comptroller’s report identifies multiple actions the NYPD could take using ClaimStat analyses to reduce its costs, including increasing accountability at the precinct level, examining claims filed to identify practices, shifts, precincts, units, or officers that open the department to legal liability, and acting quickly to address any issues that are identified.

The contrasting tales of these two agencies highlight the usefulness of the Comptroller’s new tool and suggest the strategy taken with respect to HHC might be effective at other agencies. Comptroller Stringer’s recommendation that the City include the cost of settlements and judgments in agency budgets and that these costs become a more explicit part of each City Commissioner’s responsibility is worthy of further consideration.

[1] Unlike many private and nonprofit hospitals, the public hospital system in New York City is self-insured to cover malpractice costs and does not pay for external medical malpractice insurance.

[2] City of New York, Office of the Comptroller, The Financial Outlook for the Health and Hospitals Corporation (March 2005), p. 5, www.osc.state.ny.us/osdc/hhcrpt132005.pdf.