The Cost of a Growing City Workforce

A strong local economy has enabled the City to pay for this expanded workforce; however, it will be hard-pressed to maintain this level of staffing when an economic downturn occurs. Moreover, the long-term liabilities associated with these employees will continue to grow in both good and bad economic times.

Citizens Budget Commission (CBC) has chronicled the growth of the municipal workforce under the de Blasio Administration in this online interactive feature.

New positions have been added primarily at the Department of Education (DOE) and the uniformed agencies. As shown in Table 1, headcount growth at DOE will account for 36.1 percent of the increase in budgeted headcount as new pedagogical positions have been created to implement the Universal Prekindergarten Program (UPK), as well as other educational initiatives. Uniformed agencies—the Police Department (NYPD), the Fire Department (FDNY), the Sanitation Department (DSNY), and the Department of Correction (DOC)—will account for 23.5 percent of the increase. Notable additions include expansion of the police force by 1,300 officers, increased hiring of traffic enforcement agents, increased firefighter hiring following a multiyear hiring freeze, and more correctional staffing in an effort to improve safety at New York City’s jails.

The growth has been universal across mayoral agencies and substantial in certain smaller agencies. Programmatic expansions and additional inspection personnel will increase the workforce at the Department of Buildings by more than 75 percent, from 1,073 positions in fiscal year 2014 to 1,880 in fiscal year 2019.1  Similarly, the workforce at the Department of Information Technology and Telecommunications (DoITT) will expand 57 percent, or 657 positions, by the end of fiscal year 2019 as certain contracts were insourced.2  Some priority service areas, particularly social services, have not seen a similar increase in headcount because of a reliance on contracted vendors to provide services.3 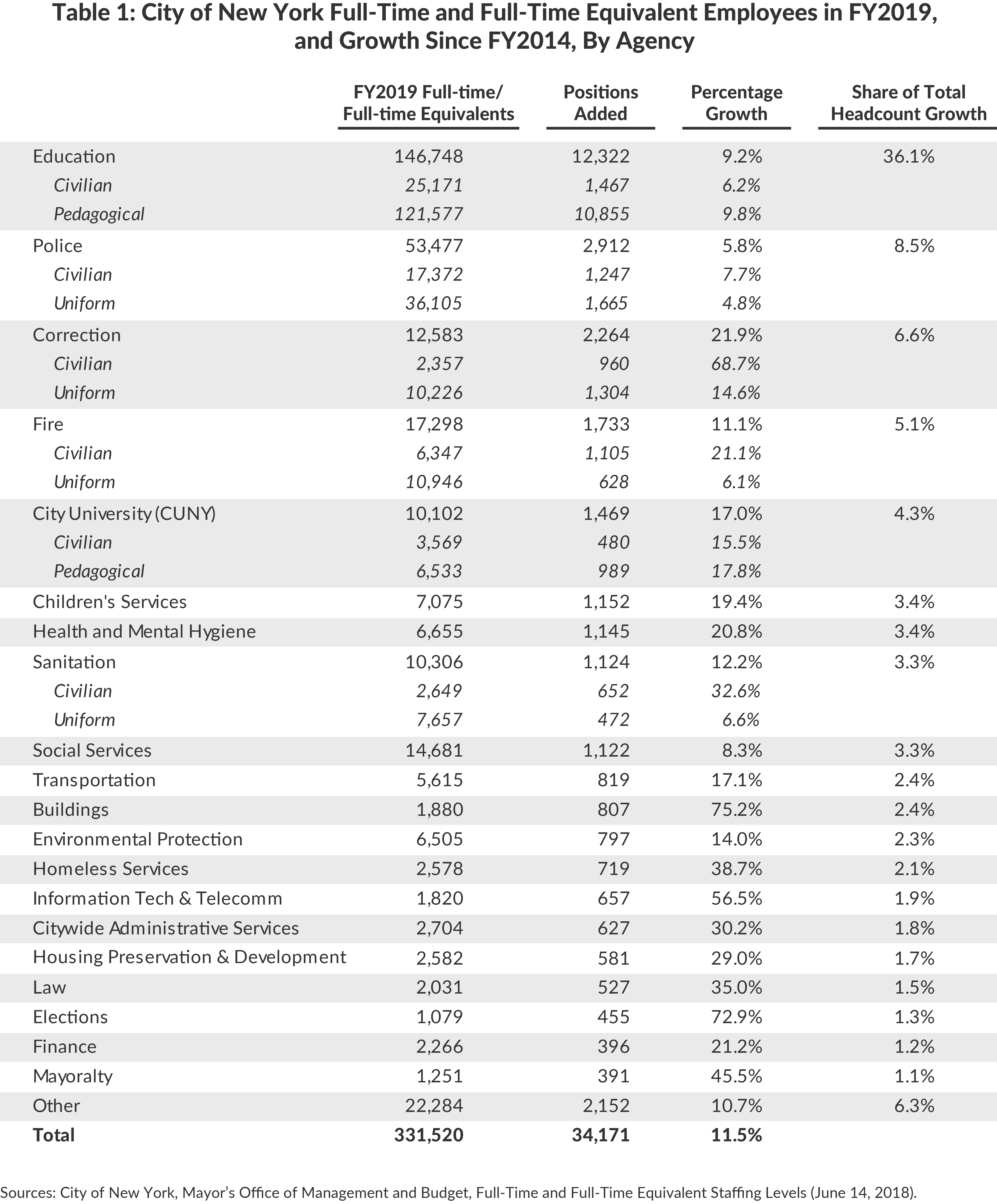 The Cost of a Growing City Workforce

The additional expenses associated with these new positions fall into two categories. The first category is current expenses such salaries and wages (including overtime and other pay), health insurance, and other fringe benefits such as payroll taxes and welfare fund contributions.4 The second category captures the long-term cost of providing retirement benefits, including defined benefit pensions and health insurance, for qualifying employees.

To simplify the analysis CBC focused on the budgetary impact in fiscal year 2019 of full-time hiring in fiscal year 2015 through March 2018, a total of 26,436 positions. Full-time equivalent employees working less than a full week’s work schedule are excluded.5 Salaries were estimated using per employee averages based on budgeted expenditures for pedagogical and civilian employees and from collective bargaining agreements and payroll data for uniformed employees.6  Health insurance costs are $15,153 per employee, calculated based on a blended rate of individual and family premiums based on employee take-up rates in fiscal year 2018.7 Other fringe benefits include payroll taxes of 7.65 percent of all earnings, the MTA mobility tax of 0.34 percent on salaries, and welfare and annuity fund contributions.8

CBC estimates these 26,436 new full-time employees add $2.5 billion in gross annual compensation costs in fiscal year 2019.9 Table 2 details the forms of compensation by category of employee. Of this $2.5 billion, $1.9 billion is for salaries and wages, with the almost half of that being pedagogical salaries–reflecting substantial hiring at DOE. Uniformed salaries are $388 million.  Salaries for these positions start relatively low, but ramp up significantly after the first five years of employment.10 Salaries for civilians total $700 million, reflecting the additions of 10,300 positions across all agencies. Fiscal year 2019 compensation costs for the additional hires average $104,882 per pedagogical employee, $91,546 per uniformed employee, and $90,197 per civilian employee.

Between fiscal years 2014 and 2018, new hires account for 67.3 percent of the growth in total expenditures for salaries and wages. 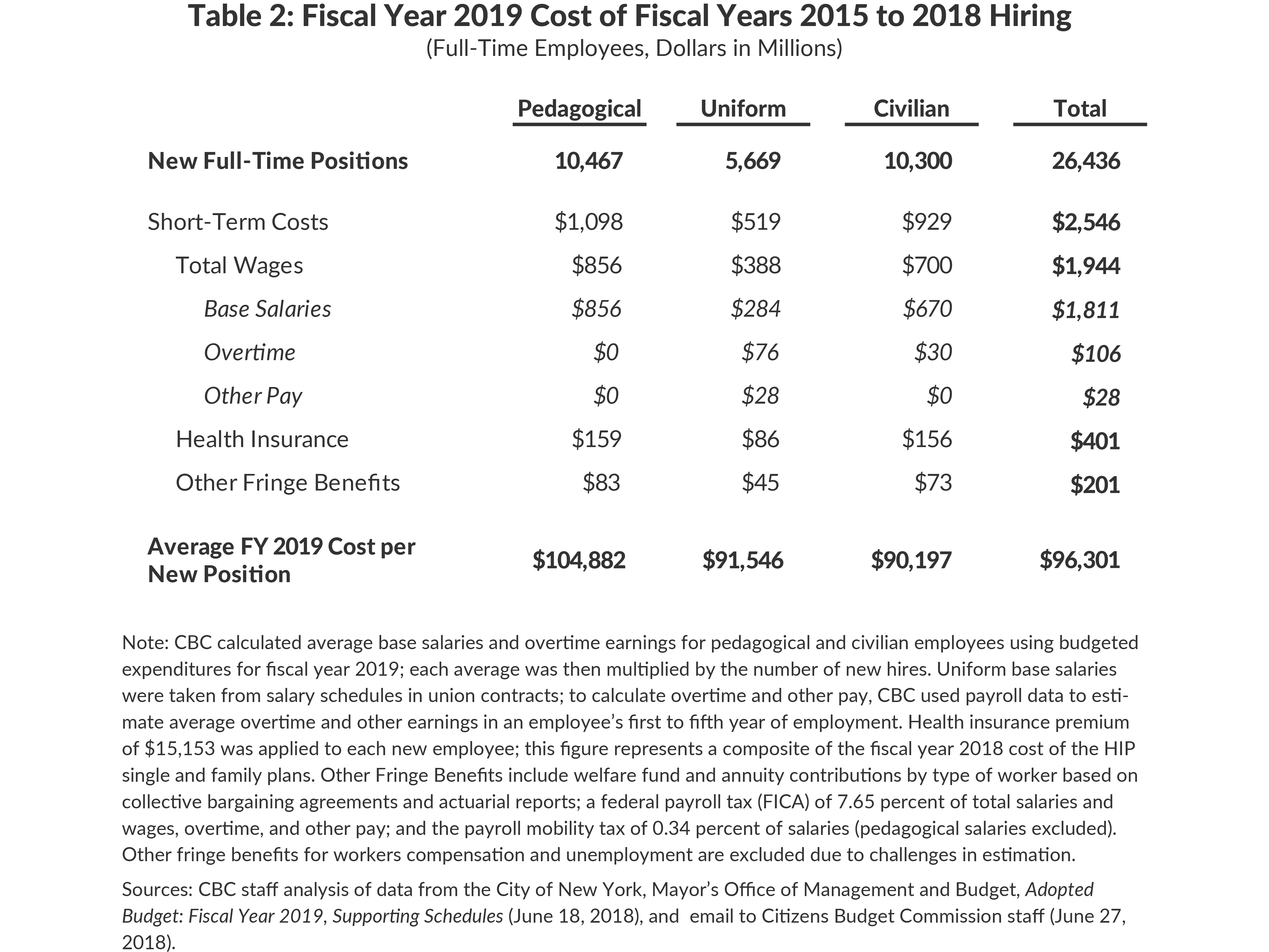 In addition to annual costs paid from the budget, hiring increases long-term liabilities associated with retirement benefits. The City offers defined benefit pension plans which guarantee employees an annual retirement benefit based on years of service, salary, and other factors; the liability for providing that benefit accrues each year. CBC estimates the new full-time hires add $180.9 million to fiscal year 2019 accrued pension liabilities.11

The City also offers retiree health benefits including health insurance without any premium contribution to those employed for 10 years and a per-retiree donation to welfare funds. The long-term liability for these health expenses is known as other postemployment benefits (OPEB). The value of these benefits is actuarially determined; the estimate below uses the present value of the benefit accrued for one year of service.12 It is important to note that the City prefunds pension benefits on an actuarial basis, but does not prefund OPEB benefits; instead, retiree health premiums and other benefits are made on a “pay as you go” basis. Together with pensions, the estimated long-term costs associated for the additional hires totals $520.5 million in fiscal year 2019.

Table 3 presents these costs by employee type. Because uniformed employees are eligible to retire at a younger age than civilian or pedagogical employees, they accrue relatively more in retiree liabilities each year. 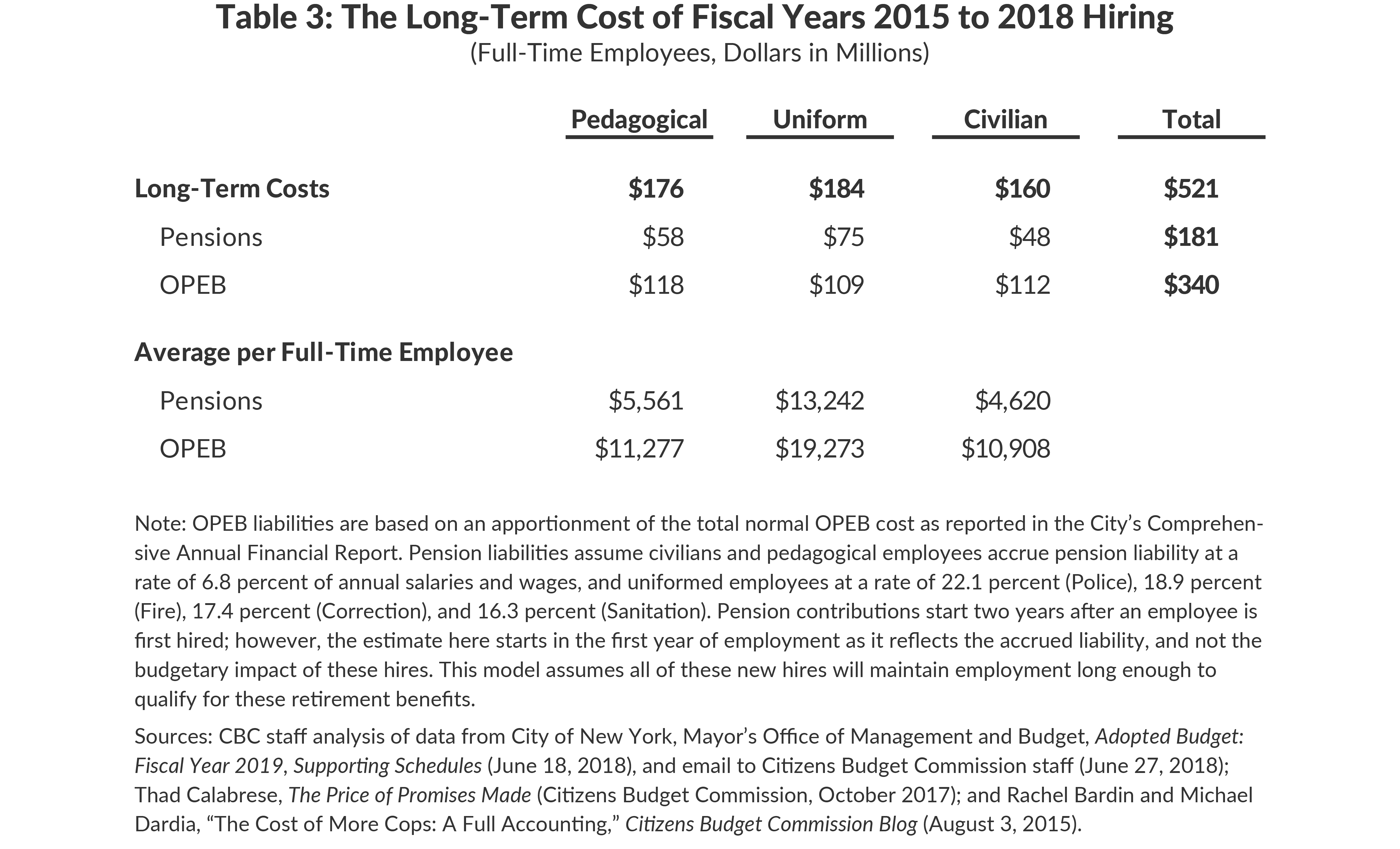 Why Headcount Growth Is Problematic

Some new positions have been added to expand the scope of services the City provides, as in the implementation of UPK. But the rapid rate of growth across all agencies also raises concerns about how effectively the Administration is assessing the marginal productivity of new positions and managing city resources. For example, the City hired additional police officers despite decades of steady declines in crime, and the police officer to population ratio exceeds most urban areas in the nation.13

As New York City enters the 109th month of an economic recovery—the longest in the post-World War II period—another concern relates to the risk of an economic downturn.14 During the Great Recession, there was a net reduction of 13,226 full-time positions from fiscal year 2008 to 2012, a 4.7 percent decrease in the City’s full-time workforce. The areas hit the hardest included pedagogical employees at DOE, the Administration for Children’s Services, and uniformed employees at the NYPD.15 Much of the downsizing was achieved through attrition although limited layoffs did occur. Attrition is problematic because the City cannot control which positions become vacant, resulting in certain critical positions going unfilled while less critical positions remain staffed. Layoffs are constrained by union and civil service rules that require seniority be considered.16 The City can achieve a smaller workforce through attrition and layoffs, but it is not necessarily left with an optimal workforce.