The Cost of More Cops: A Full Accounting

On July 1 New York City began fiscal year 2016 under the de Blasio Administration’s second budget and four-year financial plan. Expenses this year add to last year’s growth, increasing 12 percent1 in fiscal year 2016 over the Bloomberg administration’s last year in office.2 Some of the growth reflects raises for the City’s workforce under the labor contracts agreed upon over the past year and a half. However, the Mayor’s new programs and initiatives also add considerably to the City’s recurring spending, largely because of the expanded City workforce. As noted in the Citizen Budget Commission’s (CBC) interactive feature, headcount is projected to increase 6 percent, or 17,850 employees, over fiscal year 2014. Their salaries will build $890 million into the City’s recurring spending, plus $270 million for healthcare and other fringe benefits, and $80 million in pension contributions, for a total of $1.2 billion.3 While such additions are affordable this year given stronger than expected revenue gains, budget gaps grow to $2.8 billion by fiscal year 2019, even in the absence of a recession. Reducing the size of the workforce quickly in the event of a downturn can require politically unpopular and managerially complex layoffs, so the recent large headcount increases could pose a risk to future fiscal health and service delivery.

One particularly costly headcount addition was a last-minute commitment to hire 1,297 new police officers and 415 new civilians in the NYPD. Such an increase to recurring spending this late in the budget cycle is unusual; final negotiations between the City Council and the Administration typically focus on Council initiatives for the coming fiscal year, with relatively minor increases to the remainder of the financial plan. Late additions do not allow for the same degree of vetting as proposals introduced earlier in the budget process. This expansion is also noteworthy because police officers have a greater budget impact than most other City employees. Although their initial salary is comparable to other City workers, their salary nearly doubles during their first five years; they also require a higher pension contribution rate than civilian employees, 20.7 percent versus 6.7 percent of payroll.  Though policy makers can debate the merits of the community policing and counter-terrorism initiatives these new hires will support, it is clear the increased police force is a significant addition to the City’s long-term recurring spending. Accordingly, it is important to have an accurate accounting of that added cost.

How much will this hiring really cost? 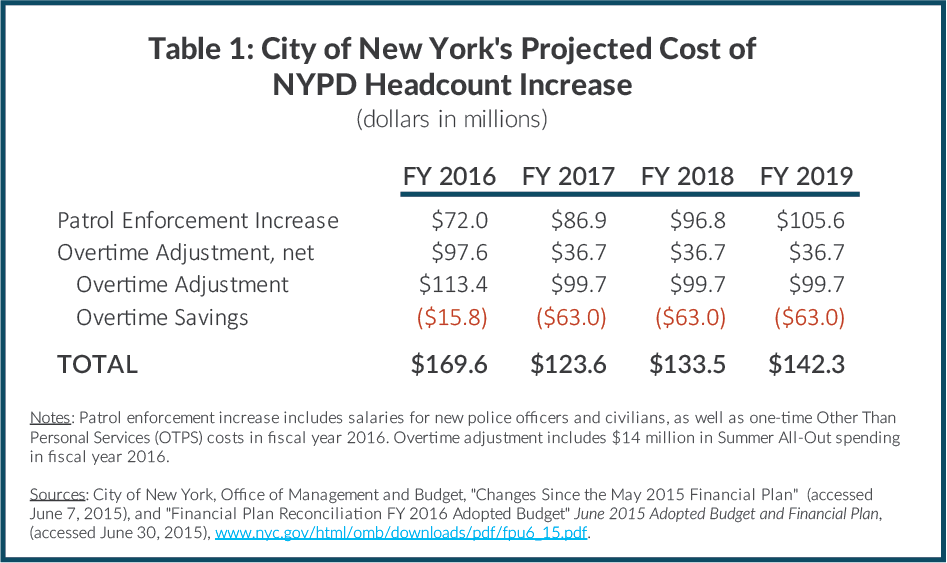 The City’s projections do not capture the full budget impact for two reasons. First, new police officers benefit from a succession of raises, the largest of which occur after the last year of financial plan and are not depicted in Table 1.5 Second, the projections exclude the cost of generous fringe benefits, primarily health insurance and pension contributions.6

The estimated full cost of the new hires will grow from $116 million this fiscal year to $212 million in fiscal year 2022. Much of the growth is driven by the cost of the police officers’ salaries; more than half of the salary increase occurs after the last year in the four-year financial plan.7 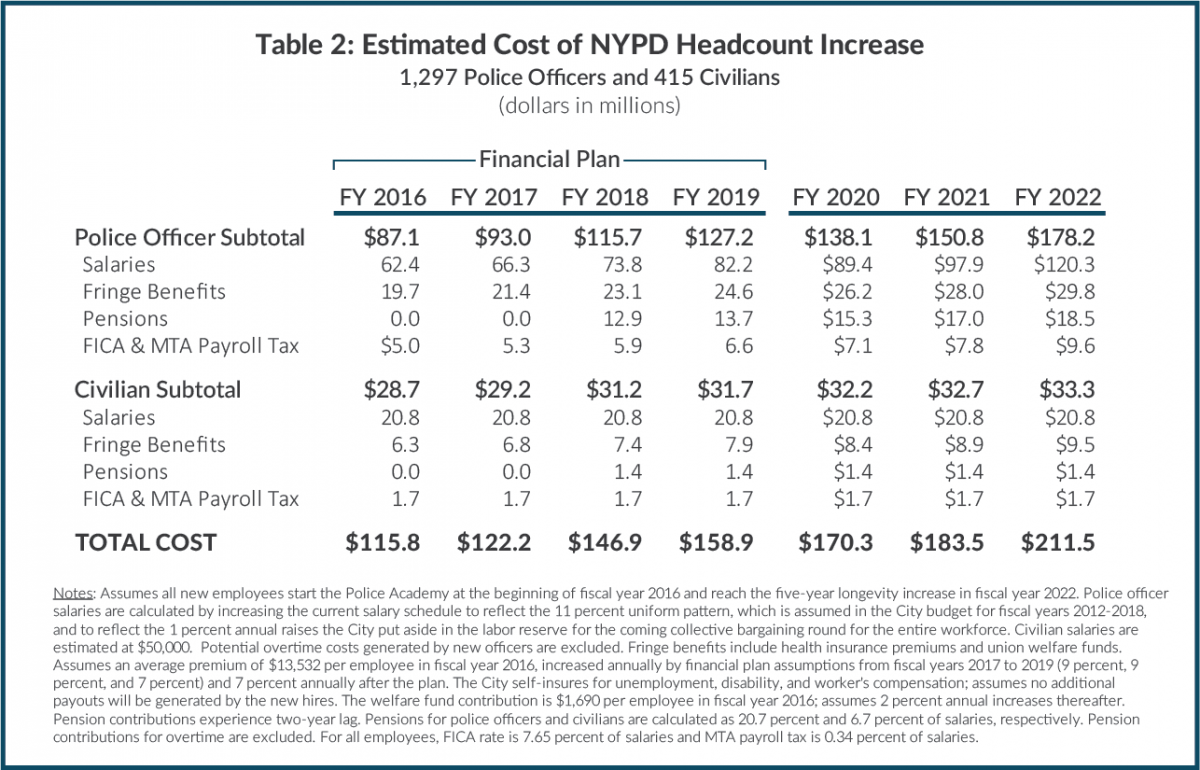 Fringe benefits also contribute significantly to the rising costs. The City bears the full cost of health insurance premiums, which are currently $17,700 for a family plan and $7,280 for a single employee. Fringe benefits will add $26.0 million this fiscal year and $39.3 million in fiscal year 2022.

The City budgets for pension fund contributions with a two-year lag and will begin payments for the increase in NYPD personnel in fiscal year 2018. The first payment will be an estimated $14.3 million; as salaries increase the payment will grow to $19.9 million in fiscal year 2022, not including pension contributions associated with any possible overtime compensation.8

Three risks could further increase the cost of the NYPD hires. The most immediate is the outcome of the binding arbitration proceedings between the City and the police officers’ union, the Patrolmen’s Benevolent Association (PBA). The PBA rejected the 11 percent raise over seven years the City negotiated with most other uniform services unions;  if it secures larger raises through arbitration, then the cost of salaries will increase, along with pension costs, FICA, and MTA payroll taxes, which are calculated as a share of salaries.

The details of the City’s plan to enforce a new overtime cap have yet to be disclosed.  If savings fall short, recurring costs could increase up to $70 million annually.

In sum, the City’s tax revenues are benefiting from strong local economic growth and can support new programs; however, the headcount additions require that revenues continue to grow faster than projected to keep the budget balanced. The new police officers are particularly expensive in future years owing to their salary growth and their high pension fund contribution rates. If the Administration expects to maintain these personnel and programs during the next economic downturn, it should seek substantial efficiencies elsewhere in the budget.

By Rachel Bardin and Michael Dardia