New York City’s rent laws expire on June 15 of this year, after a six-year renewal period. As rent laws faced expiration and modification in 2009, the Citizens Budget Commission provided a set of facts for legislators to consider. A follow-up report on the economic impacts of rent regulation in New York City found rent regulated units were ineffectively targeted and did not necessarily provide affordable housing for low-income tenants. As the New York State legislature once again debates the renewal of New York City’s rent laws, it is useful to offer clarifying facts regarding myths about rent regulation and the City’s rental market.

Many public officials and housing advocates cite the claim that the majority of tenant households - 56 percent – are “rent burdened,” meaning their rent-to-income ratio exceeds 30 percent. But the 56 percent figure is problematic because “rent” is based on “gross rent,” not on the actual “out-of-pocket” rent paid. Out-of-pocket rent is a more accurate measure for assessing the rent paid by households because it takes into account government financial assistance. Many households in New York City receive support from federal, state, and city governments to reduce the actual rent paid.

Using the out-of-pocket figure, 38 percent of New York City’s tenant households are rent-burdened.1 Although this is still a high number of affected households, the distinction is important. Reporting the gross rent-to-income figure overstates the burden and understates the impact of financial support from  government on affordability.

Characterizing market rate units as unaffordable undermines the important role they play by providing housing for 39 percent of New York City’s population. While many low-income households in market rate housing are rent-burdened, about 83 percent of moderate-, middle-, and upper middle-income or higher households are not (see Figure 1). (See Appendix table for definition of income groups by household size.) Market rate housing also provides affordable rents for more than 105,000 extremely-low, very-low, and low-income households. 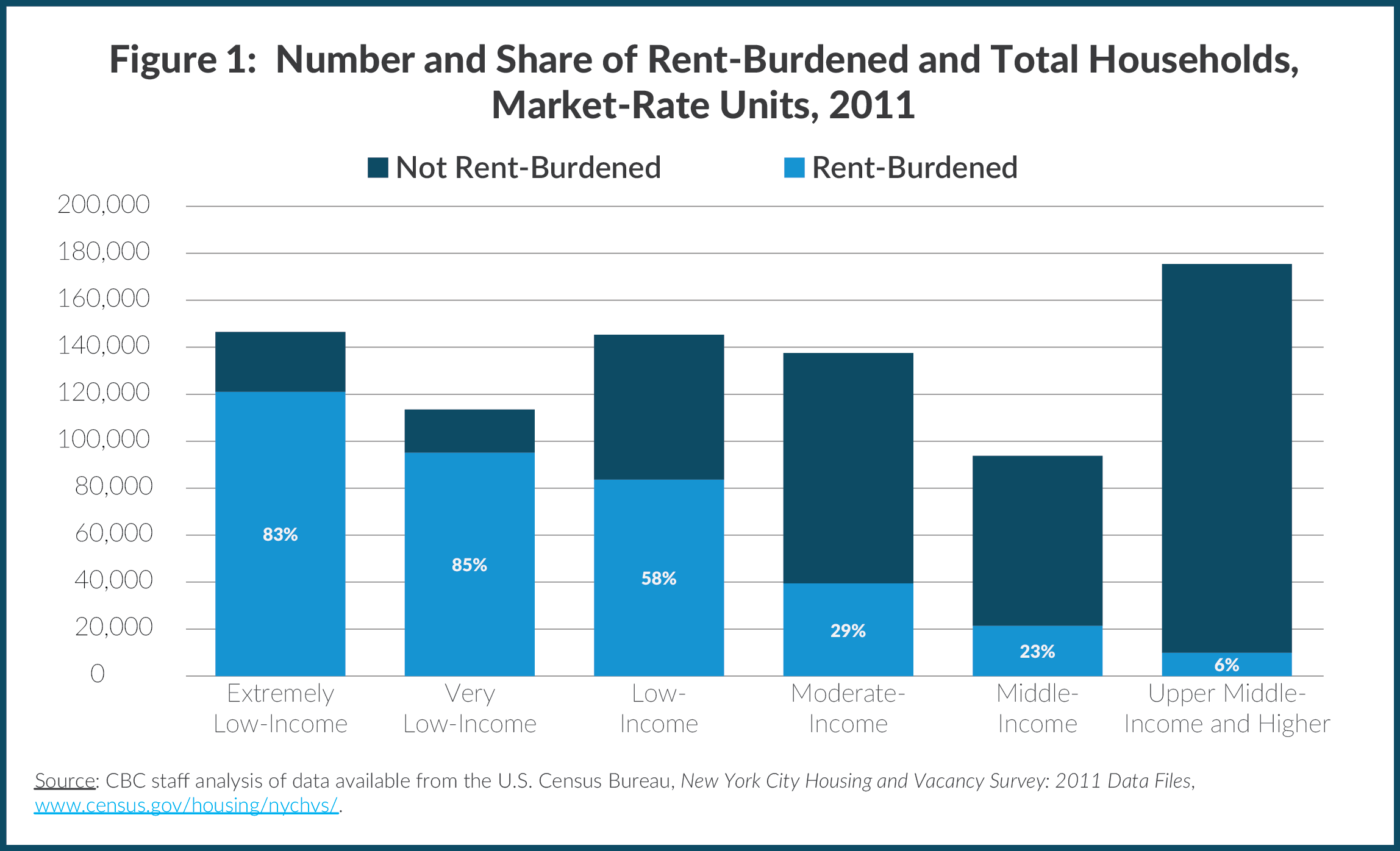 Regulated housing is often referred to as “affordable” housing; this characterization is problematic. About 44 percent of tenants in rent-regulated units – defined as rent-stabilized and rent-controlled housing – are “rent-burdened.”

Figure 2 presents the share of rent-burdened households in rent-regulated housing by income group. The share of rent-burdened households is generally lower for each income group than for market-rate housing, but about three quarters of extremely-low and very-low income households, more than 327,000 households, are living in “unaffordable” rent-regulated housing with rents in excess of 30 percent of income. 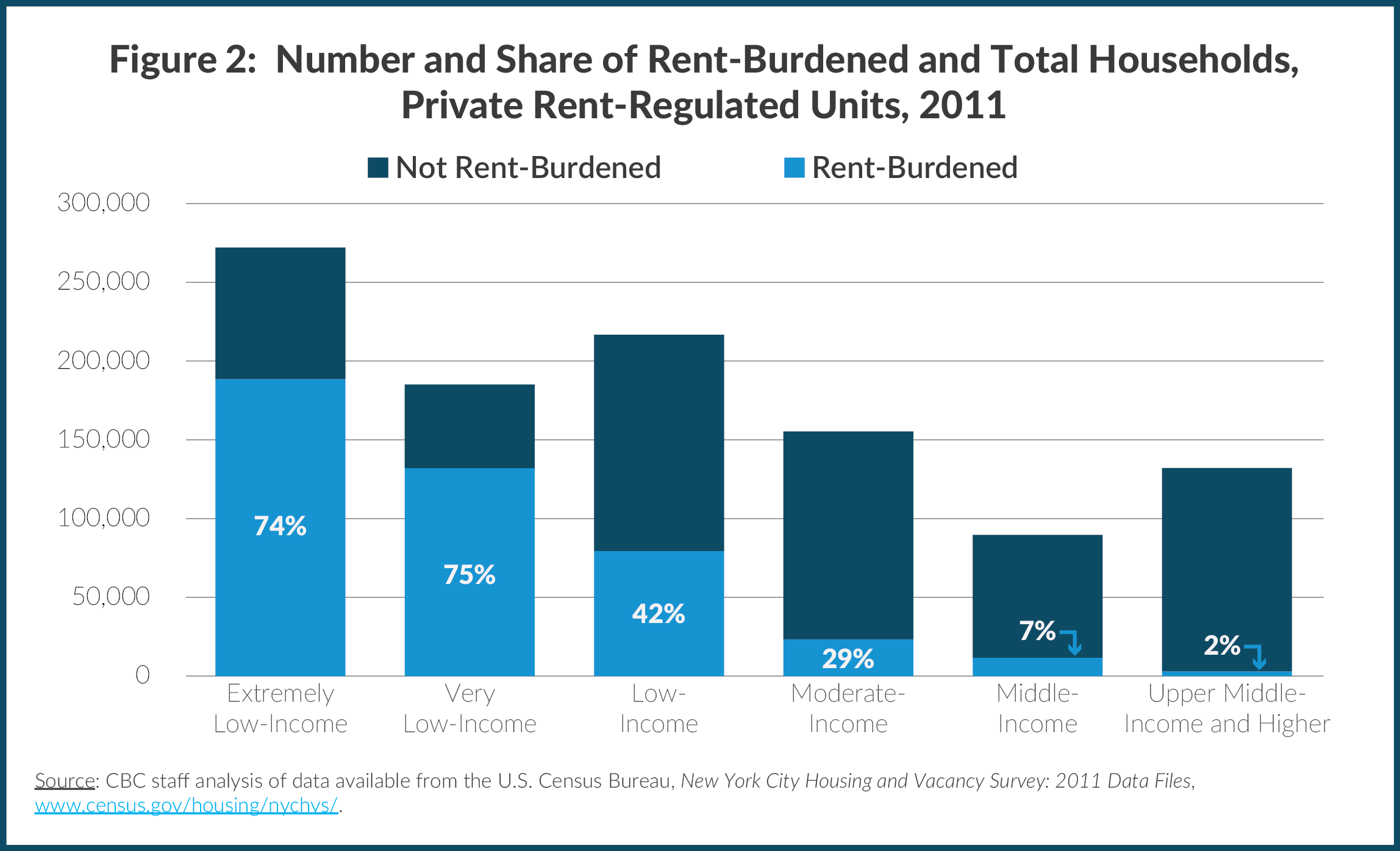 In contrast, households at the higher end of the income spectrum receive significant benefits from rent regulation. More than 211,000 regulated units are occupied by middle-income and upper-middle income households, few of whom are rent-burdened. Rent-regulated units promote affordability only for households earning incomes sufficient for them to reside in market-rate units as well. Rent regulation is not an effective mechanism for achieving affordability for low-income households.2

Rent regulation is often referred to as a critical tool to support New York City’s middle class, but rental housing is affordable for most middle-income households, regardless of rent regulation status. Middle-income units are defined as earning 120 to 165 percent of area median income. The median rent-to-income ratio for middle-income tenants in New York City is 19 percent, well below the 30 percent threshold for rent burden. Only 15 percent of all middle-income households across all rental housing types are above the 30 percent threshold for rent-burden.3

Change in Number of Rent-regulated Units

The increase of rent-regulated units in 2013  stemmed from a decline in the number of units deregulated due to vacancy/high-rent and the addition of units under the 421-a and 420-c programs. In 2013, nearly 6,000 units were added through 421-a and 1,967 were created through 420-c. Vacancy/high-rent decontrol accounted for a loss of 4,801 units during the same period.  More than 1 million rent-regulated units remained in New York City in 2014.5