Governor Andrew Cuomo’s fiscal year 2014-15 Executive Budget proposes to increase education aid from $21.1 billion to $21.9 billion, a change of $807 million or 3.8 percent from school year 2013-14. If the legislature approves the increase, school year 2014-15 will mark the first year that school aid surpasses its pre-recession 2009-10 peak. (See Figure 1.) Unfortunately, much of this large infusion of resources will be misdirected to school districts with less need than others. Before more money flows to local districts, State leaders should adjust the distribution to give more to the districts with the neediest students and least ability to pay on their own. 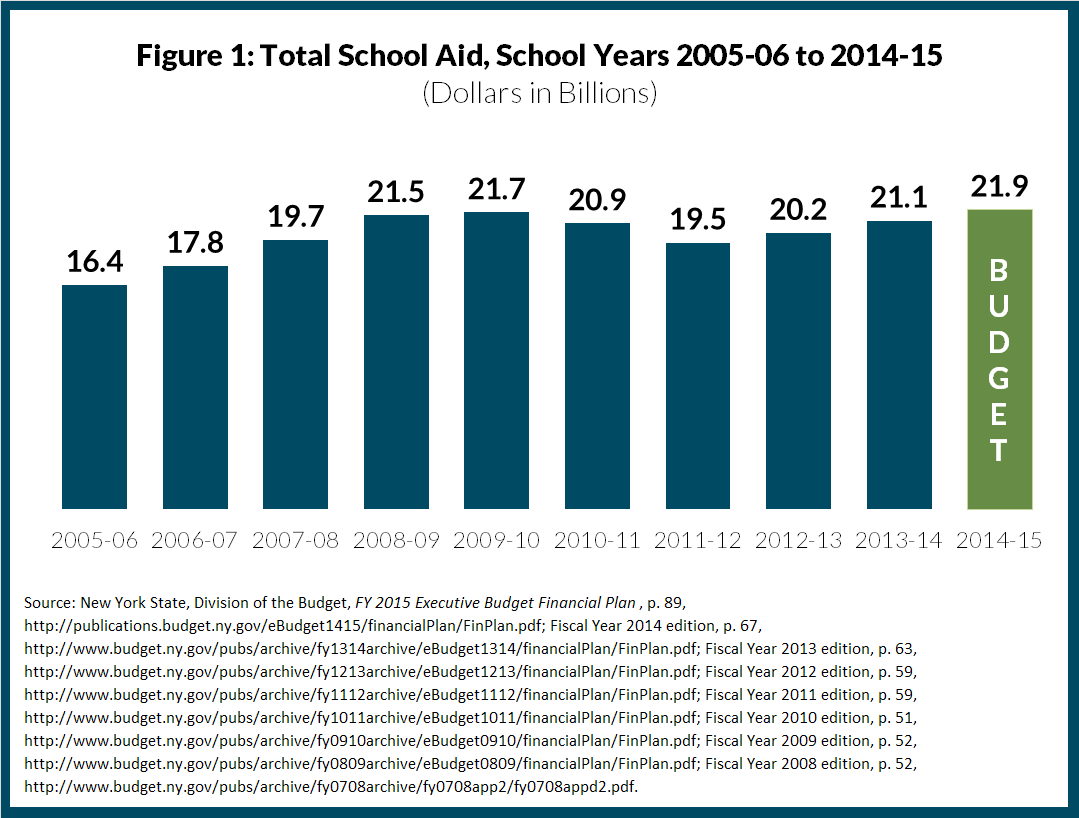 Of the $807 million proposed increase, $204 million is for special initiatives that are not distributed by formula, including $100 million for expanded prekindergarten programs. The remaining increase of $603 million is distributed according to formulas and is included in the district-by-district “runs” generally used to indicate how aid is divided among the school districts. Of this total, $323 million would be distributed as a partial restoration of the “Gap Elimination Adjustment” (GEA) used to reduce school aid in fiscal years 2010-2012, and categories covered by expense-based formulas would receive an additional $280 million.

The additional money is poorly targeted for two basic reasons. First, the GEA restorations are going to both needy and non-needy districts without adjustments for important changes since the original cuts were determined in 2009. Second, the expense-based aid money goes to districts with relatively high spending in the designated activities; these tend to be wealthier districts that have made large capital investments or otherwise spend heavily in reimbursable ways.

Figure 2 shows the percentage increase in per pupil aid for all school districts divided into deciles based on their need as measured by a combination of wealth in the district and need among students.[1]  The districts in the lowest need/highest wealth decile would receive an average increase of 3.3 percent compared to a 4.2 percent increase for those in the highest need/lowest wealth grouping. Districts in the second neediest decile would see aid rise by 4.9 percent on average. The average increase for districts in the middle of the distribution, in decile six, would experience the largest increase, 5.2 percent. 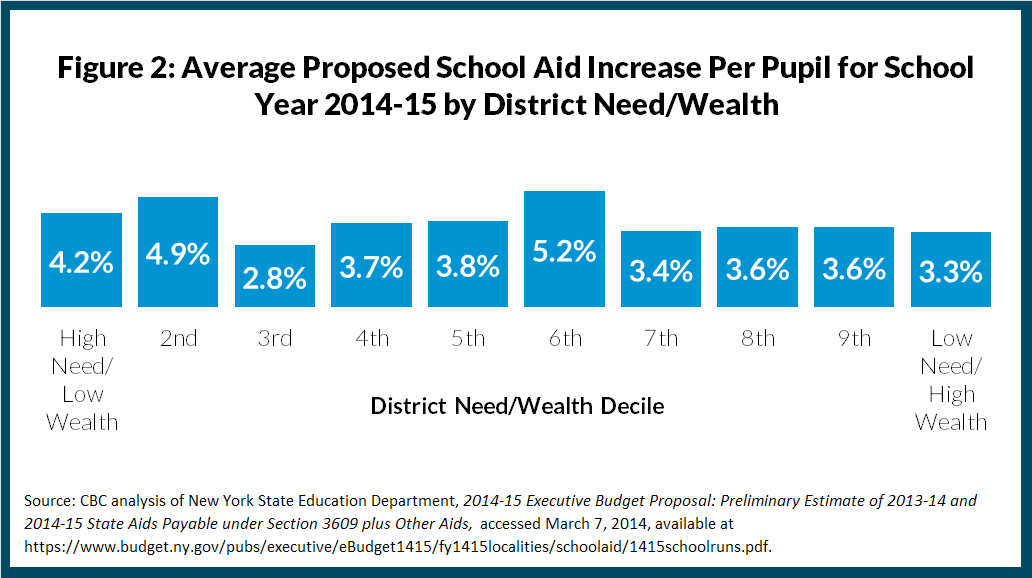 1. Aid distribution is based on outdated district enrollment data. The GEA was $2.6 billion in school year 2010-11 when school aid was initially cut. Since school aid began to grow again in 2012-13, the State has been gradually “repaying” the GEA rather than channeling increases through needs-based aid formulas (known as ‘Foundation Aid’). But the underlying demographics of many districts changed in the last four years. As a consequence districts experiencing enrollment growth see their per pupil general operating aid (Foundation aid plus GEA restoration) fall, while districts with shrinking enrollment are getting more per pupil. Figure 3 shows the contrast between change in enrollment and change in aid per pupil. Districts on the left have experienced decreased enrollment since school year 2012-13; as a result their aid per pupil increases under the Governor’s proposal. In Wappingers Falls, for example, enrollment decreased 2.5 percent, yet total GEA restoration/Foundation aid would increase 1.6 percent, leading to a per pupil increase of 4.2 percent. Similarly, in Smithtown on Long Island, enrollment decreased by 2.7 percent but the GEA restoration approach generates an aid increase of 0.8 percent increasing per pupil aid by 3.6 percent. 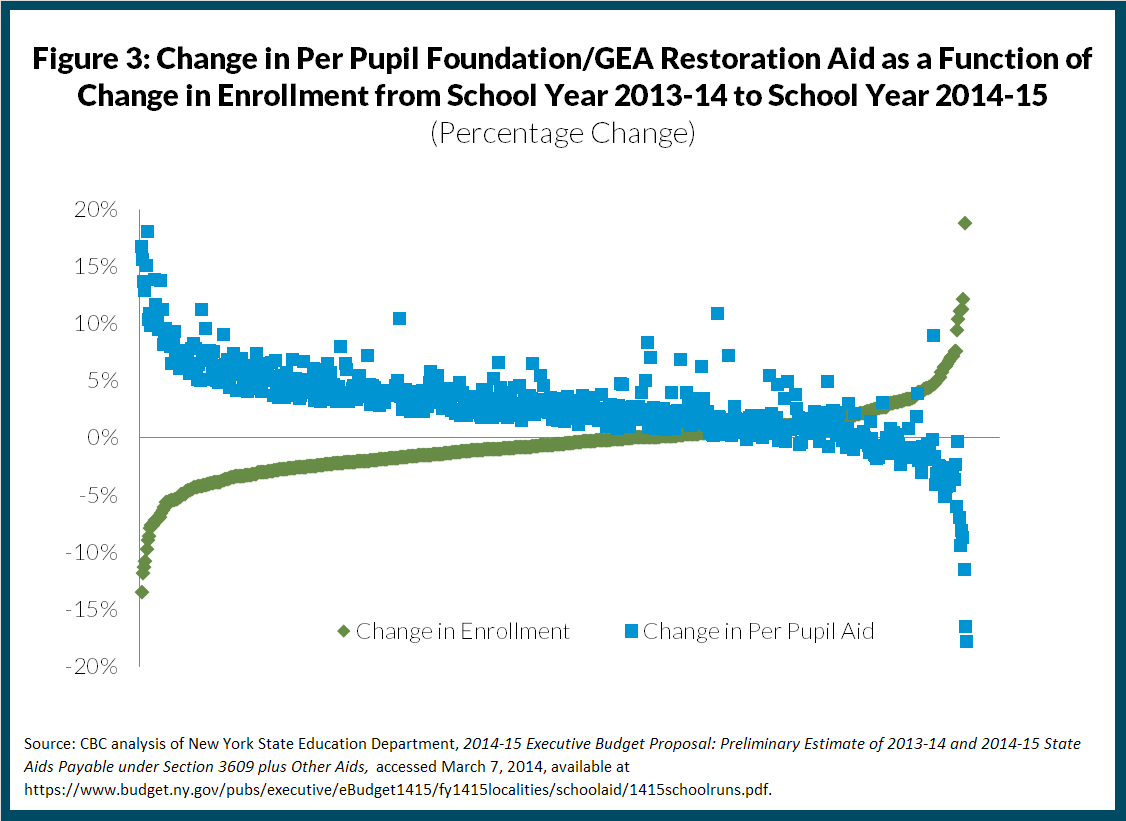 In contrast, aid would lag in districts with increasing enrollment. In Buffalo, for example, enrollment increased 3.0 percent, but GEA restoration/Foundation aid increased just 1.5 percent resulting in a per pupil decrease of 1.5 percent. Syracuse, Ithaca, and Troy would experience per pupil aid reductions of a similar magnitude because of enrollment growth ranging from 2.6 percent in Ithaca to 4.2 percent in Troy.

2. Expense-driven aid, which favors wealthier districts that spend the most on these activities, is growing more rapidly than foundation aid. Growth in expense-based aid is outstripping growth in Foundation aid; the proposed year-to-year increases are 3.9 percent versus 2.4 percent (See Figure 4).

The percentage increase in per pupil expense-based aid for the wealthiest districts, 4.8 percent, is greater than the increase for three other deciles including the third neediest. The sixth least needy district receives an increase (6.9 percent) greater than among all other districts except one. 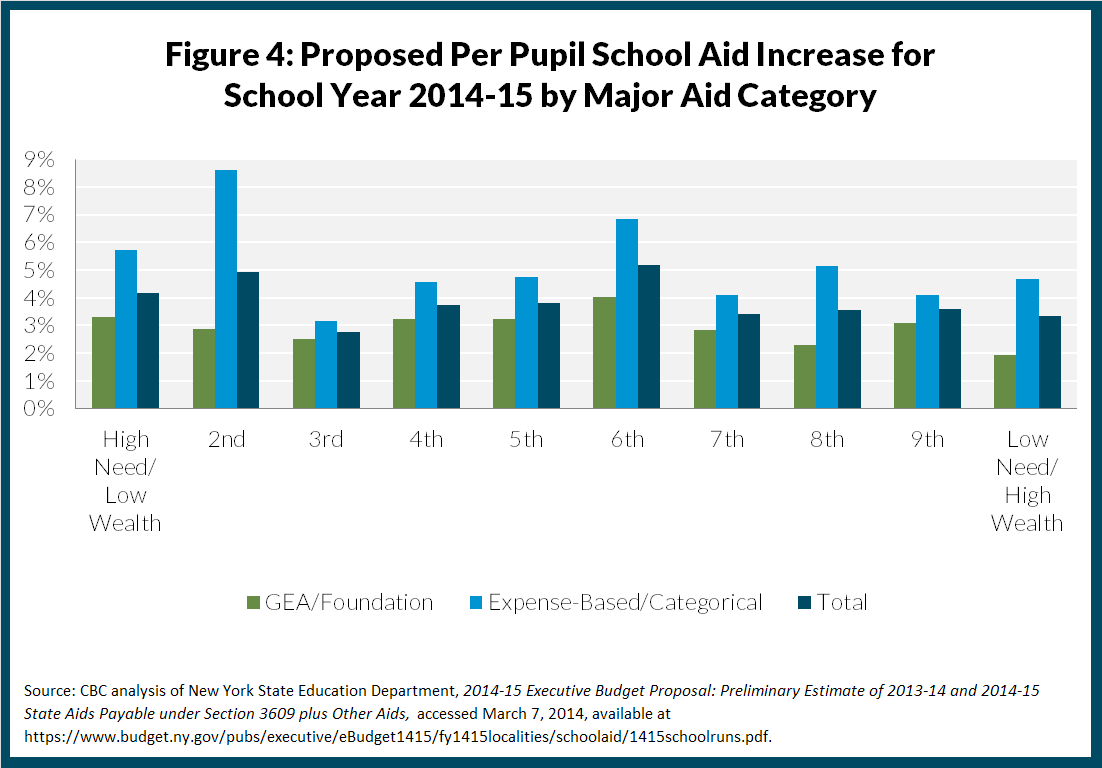 In this year, and in coming years, school aid is likely to increase substantially. But the formulas distributing this aid are seriously flawed. School aid should be allocated according to student need and district ability to pay. The GEA restoration approach should be abandoned, and operating aid should be funneled through up-to-date foundation formulas. In addition, the formulas that distribute expense-based aid should be refined to reduce costs and to be better targeted.[2]

[1] Deciles calculated based on poverty measures and combined wealth ratio in each district.