In February 2020, with fewer than 2 months left in the State’s fiscal year, the New York State Division of the Budget projected fiscal year 2020 SOF disbursements would total $103.9 billion, a 3.7 percent increase from fiscal year 2019.1 Subsequently, as the COVID-19 pandemic forced the State to reevaluate its finances, the April update to the financial plan reported fiscal year 2020 spending of $102.2 billion, resulting in exactly 2 percent growth. However, as in recent years, this reported spending growth rate is not the case.

Based on the most recent financial plan update, adjusting for payment delays that distort the timing of spending, SOF spending grew 3.9 percent in fiscal year 2020, nearly double the reported 2 percent. Table 1 shows actual spending growth rates—all in excess of 2 percent—for the three most recent fiscal years. The most significant adjustments to reported growth rates are: 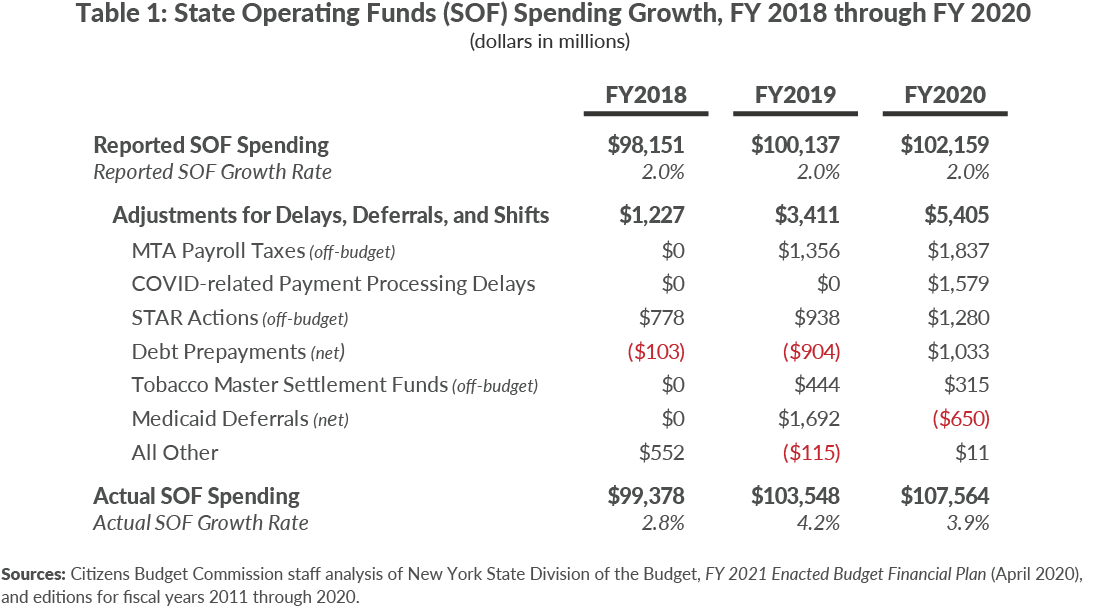 Over the next four years the New York State budget faces projected budget gaps totaling $58 billion.3 The pandemic response and ensuing recession is reducing tax revenues, lottery receipts, and other revenue sources. To balance the budget there are five general options available to the State: (1) use reserves, (2) reduce expenses, (3) increase taxes, (4) sell assets, or (5) borrow. Each of these options has its own benefits and drawbacks, and it is likely to be used in combination with others. Additional federal support would provide some external relief, but the timing and amount of aid remains uncertain.

The Fiscal Year 2021 Enacted Budget specified a number of budget balancing measures, including reducing school aid from the Executive Budget proposal, receiving pandemic-related federal aid, and accessing other state resources, such as prior year balances. However, the gap-closing plan included $8 billion in to-be-determined State aid to localities reductions and another $1 billion in State agency spending reductions.4 The planned reductions to aid to localities remain unidentified, and reductions are made more difficult because the State needs to pay for previous years’ costs that were delayed into the current fiscal year. The programmatic impact of those decisions will also increase the later in the year they are made. The Supplement to the Annual Information Statement, released last week, indicates a plan will be released late in the second quarter of fiscal year 2021 at the earliest, after decisions are made on federal aid.5

As part of the Fiscal Year 2021 Enacted Budget, the Governor and the Division of the Budget have authority to identify and make spending cuts if SOF tax receipts are below or if spending exceeds projected levels by more than 1 percent. Based on year-to-date tax receipts, that special authority has already been triggered, but the Governor has said that the State will await final federal decisions on state and local government aid. One quarter of the State’s fiscal year has already passed and the acuity of still unidentified cuts builds with each passing day.

Table 2 shows planned SOF spending growth from fiscal years 2020 to 2024. In fiscal year 2021 the reported spending reduction is 7.1 percent. A portion of the year-to-year decrease in spending is attributable to pandemic-related federal aid for Medicaid and school aid that offsets State spending. These federal funds do not represent cost reductions in the programs, but shift that spending from SOF to federal funds, reducing the former and increasing the latter. When the federal offsets are added back, the budget reduction becomes 3.8 percent, showing that achieving the planned spending targets remains very difficult as the State needs to flip the script of recent spending growth to one of spending reduction. When the spending delays and shifts (described above and in Table 1) are accounted for, the reduction of spending is 5.4 percent.

All of these spending targets assume $8 billion annually in unidentified budget balancing actions. As of July 1, the State is expected to benefit from an additional $726 million in federal Medicaid funding, likely offsetting a portion of planned State actions and reducing the unidentified aid to localities reductions in fiscal year 2021 to $7.3 billion.6 If these savings are not achieved—meaning the programs continue as currently planned–and making adjustments for payment delays, deferrals, and accounting shifts, spending would grow by 1.4 percent. In each of the plan’s future years growth would be more than 3 percent. Absent an identified and implemented savings plan, the State’s spending is still growing, while State receipts remain below pre-pandemic projections. 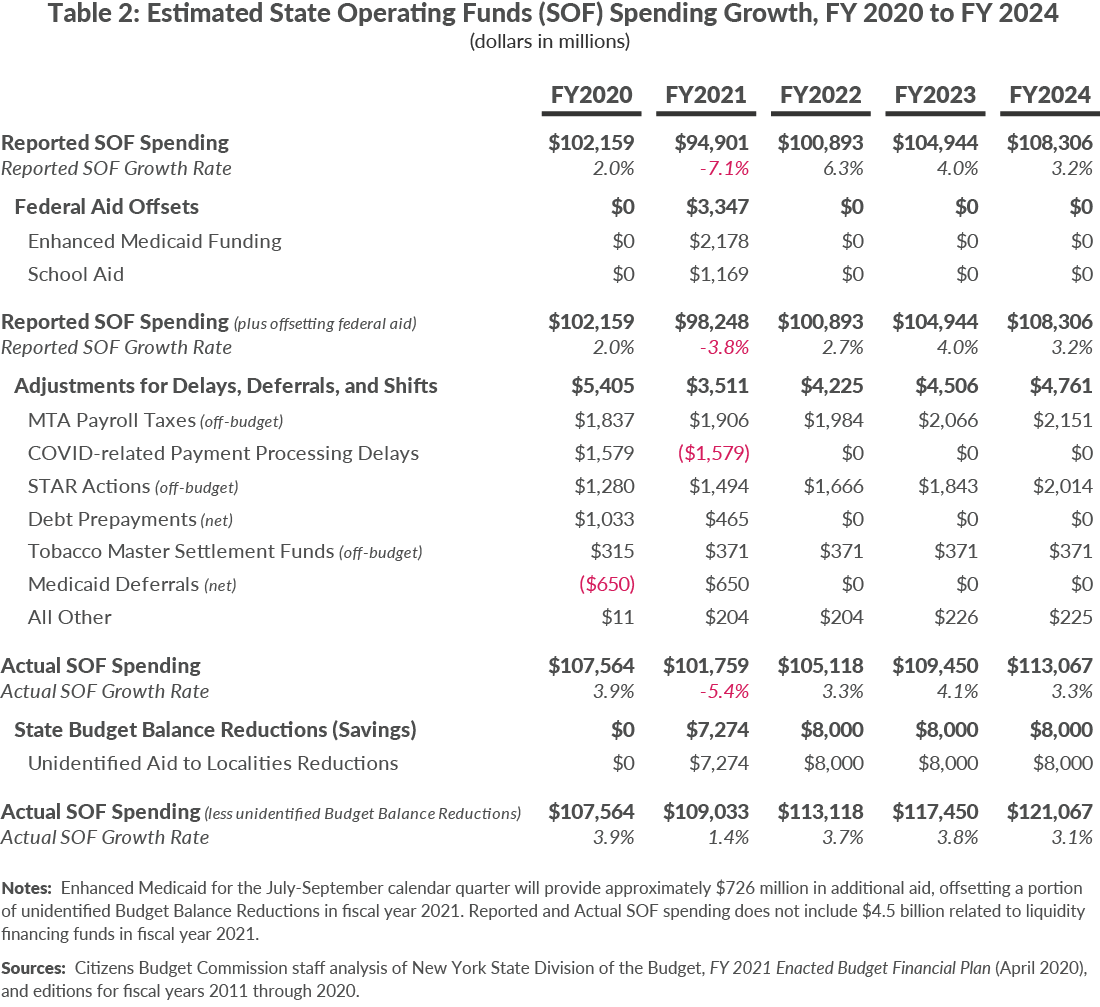 Identifying $8 billion, or 8 percent, in SOF spending reductions during the current fiscal year will require hard choices. Imprudent use of one-time settlement funds and failure to better save for a rainy day during the economic expansion have left the State less prepared for a recession than necessary. Reducing spending is made more difficult because the State delayed payments and shifted spending off-budget when times were good, actions that deflated reported spending growth and pushed costs from previous years into the current year. The continued delay in putting forth a plan to make expected spending reductions will make matters worse, as the level of needed spending reductions remains the same but the period to absorb the cuts dwindles.

The current budget landscape requires a timely, transparent plan that makes the hard choices needed to balance the budget. Reducing school aid to wealthy districts, financing capital projects with bond proceeds rather than on a pay-as-you-go basis, eliminating unproductive economic development spending, walking back tax policy expenditures, and other actions can be used to close the $8 billion gap. The plan should not rely on fiscal maneuvers and accounting shifts that have obscured spending growth and exacerbated budget pressures for three years running.