Funding a Sound Basic Education in 2020

Educating New York’s children is one of the most important undertakings of State and local government and is enshrined in the New York State Constitution, which confers the right to a sound basic education (SBE). A serious challenge is that despite significant funding increases over the past decade, some districts still do not have the resources to provide an SBE.

The vigorous debate on the amount and distribution of state education aid occurs with each annual budget cycle. In recent years the Governor has proposed substantial increases. Yet the Board of Regents, teachers’ unions, and advocates demand even larger increases, and the adopted budget falls somewhere in between. This year is no different: the Governor has proposed an increase of nearly $1 billion while others advocate for more than $2 billion.

Despite contrary claims, the majority of districts already have sufficient resources to fund an SBE. In fact, due to significant increases in spending over the past decade, the State could ensure all districts have the resources to provide an SBE by increasing aid by $164 million and targeting it to 32 of the state’s 674 districts that are underfunded.

To be clear, providing the financial resources to provide an SBE does not guarantee that all students receive a high-quality education. However, it is an important goal to meet and can be accomplished with  less than 20 percent of what the Executive Budget proposed.

State Aid Need Only Increase $164 Million to Fund an SBE

In response to the lawsuit that found the State was failing to provide New York City with the resources needed to provide an SBE, the State created a formula to determine the amount needed for each school district.1 The formula determines the total district resources needed by specifying a base per pupil amount and adjusting it for special student needs in each district along with regional cost differences.

Based on this calculation, $62.6 billion is needed in 2020 to provide an SBE for New York’s students. As Figure 1 shows, school districts will spend an estimated $72.0 billion in 2020—even assuming no increase in State aid from 2019, historical federal funding levels, and local increases commensurate with the property tax cap.  This is $9.4 billion more than is necessary to fund an SBE. (See Figure  1 and Appendix.)

While total funding is greater in the aggregate, 32 districts would have $164 million less than needed. Therefore, the goal of providing sufficient funding for an SBE could be achieved statewide with nearly $800 million less than proposed in the Executive Budget.  (See Figure 2.) 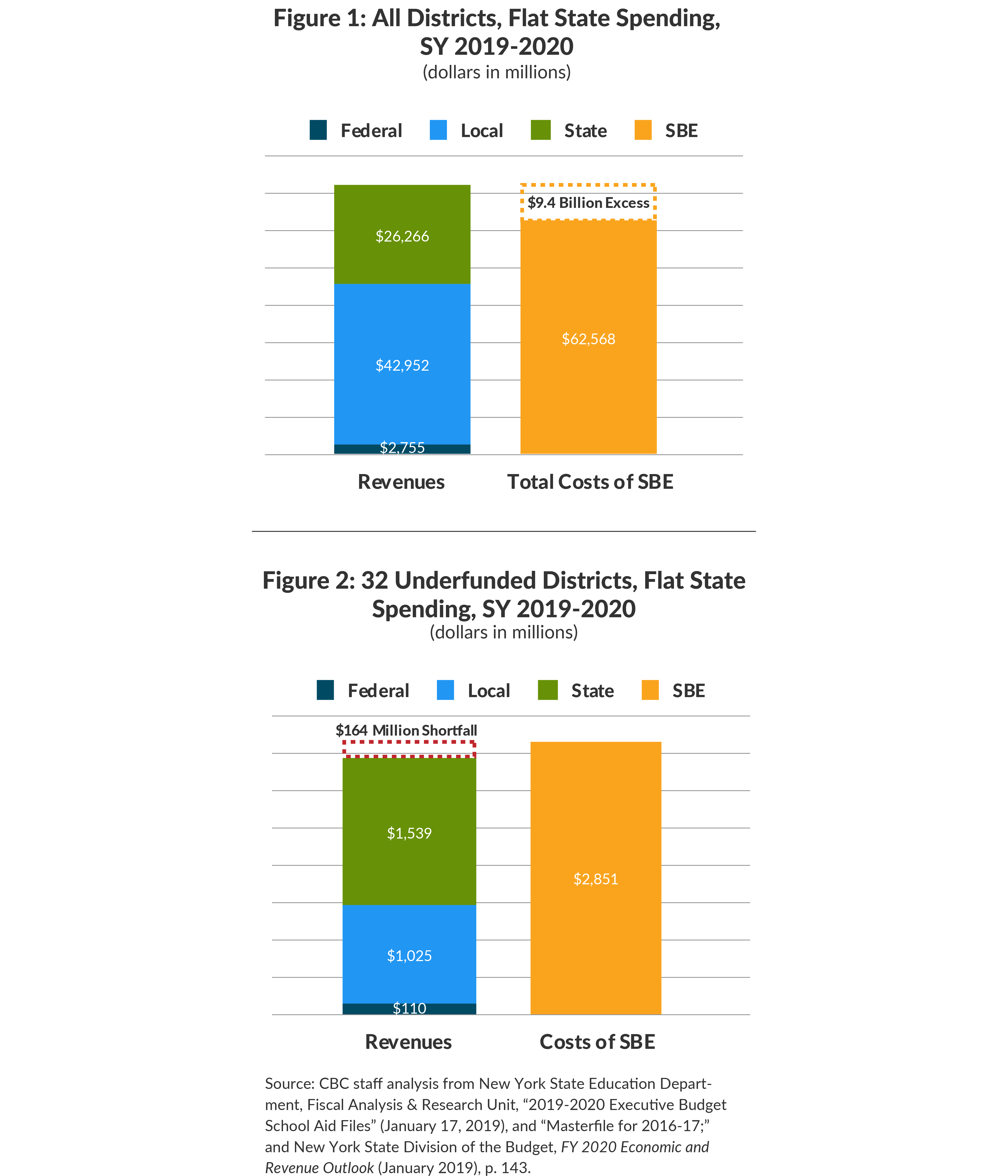 The Governor’s Executive Budget proposes to increase school aid $956 million.2 However, since it is not targeted to districts with the greatest need, 28 districts still would not have the resources needed. Not surprisingly, the underfunded districts are generally low-wealth districts.3 (See Table 1.) 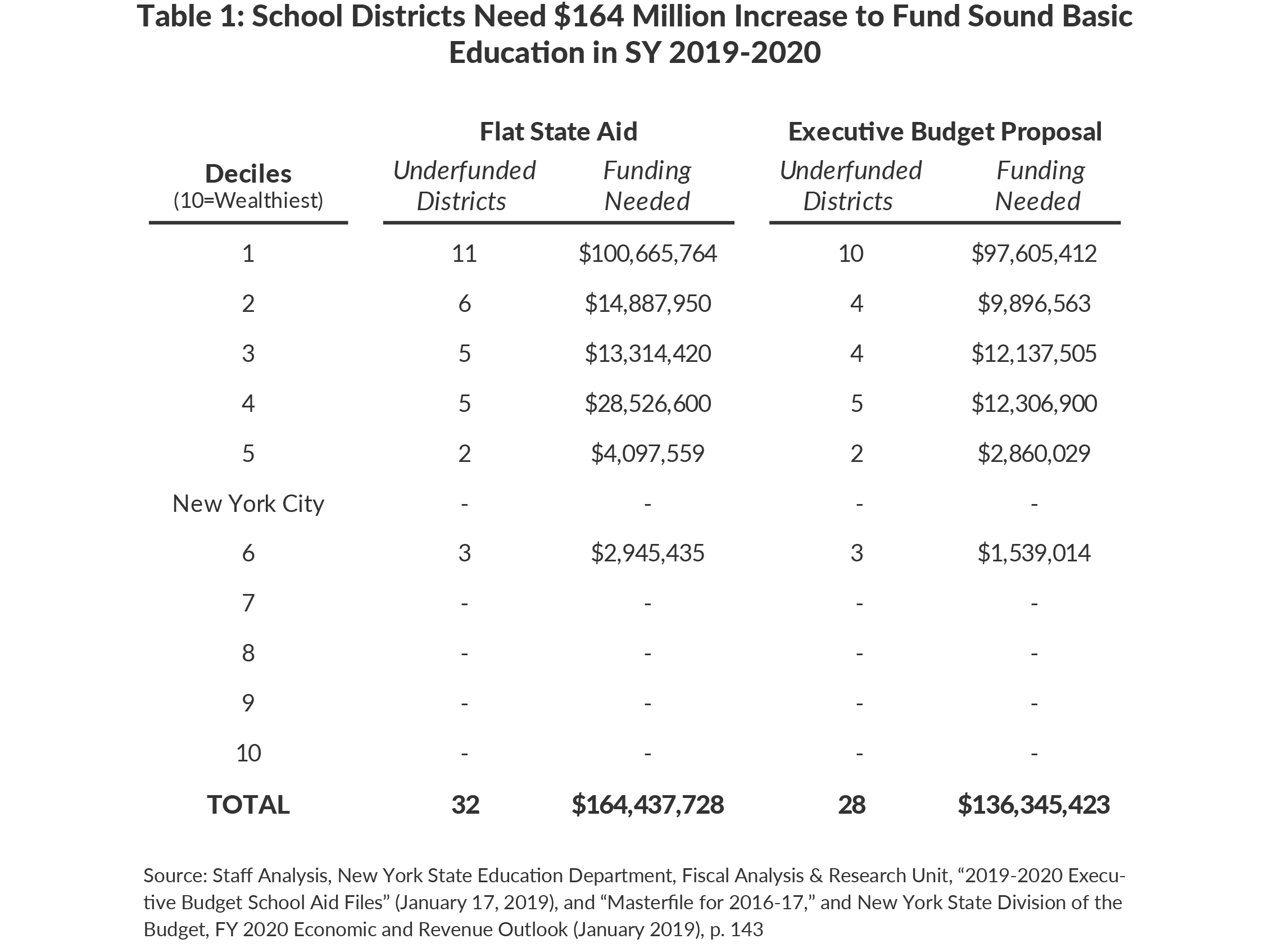 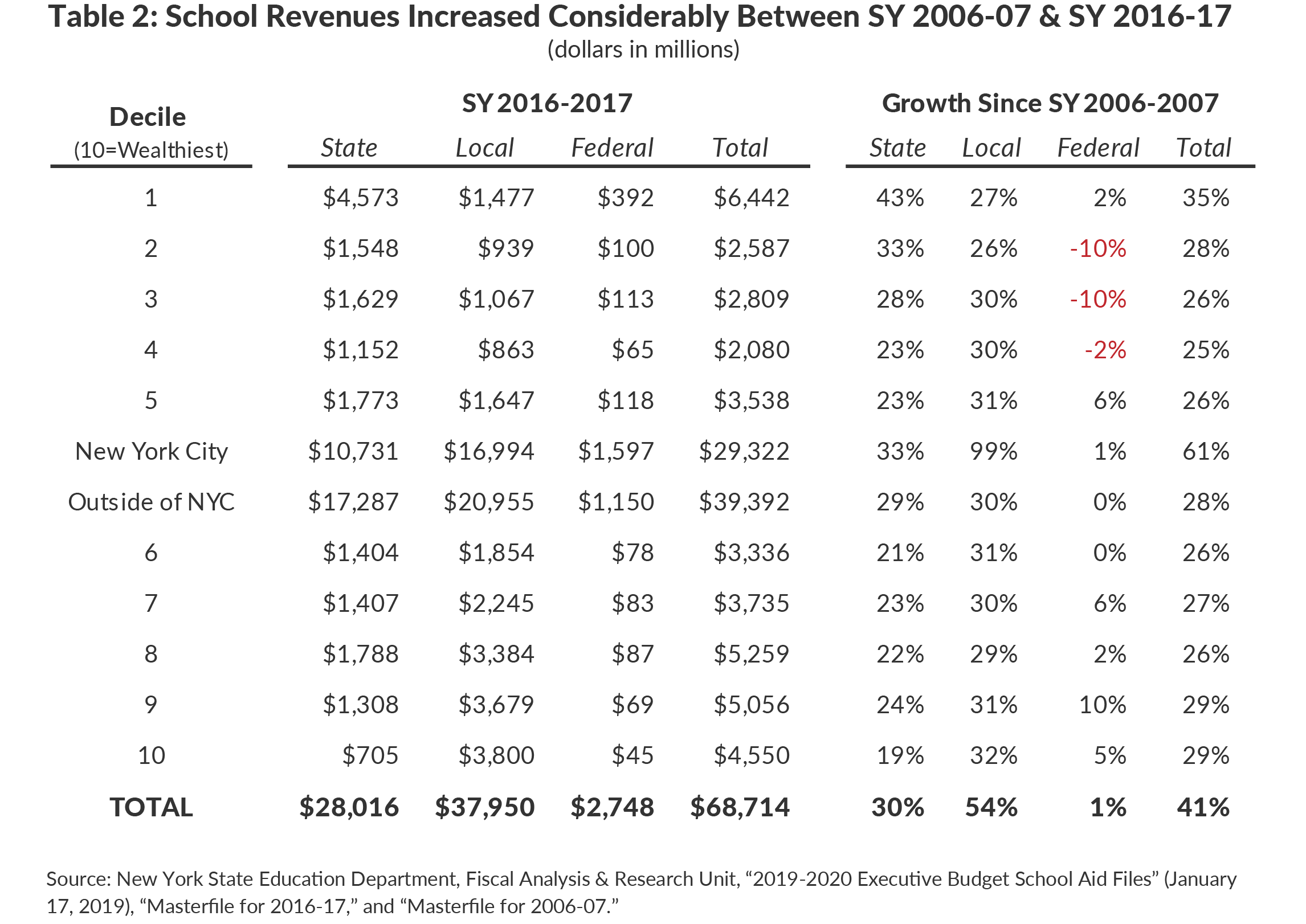 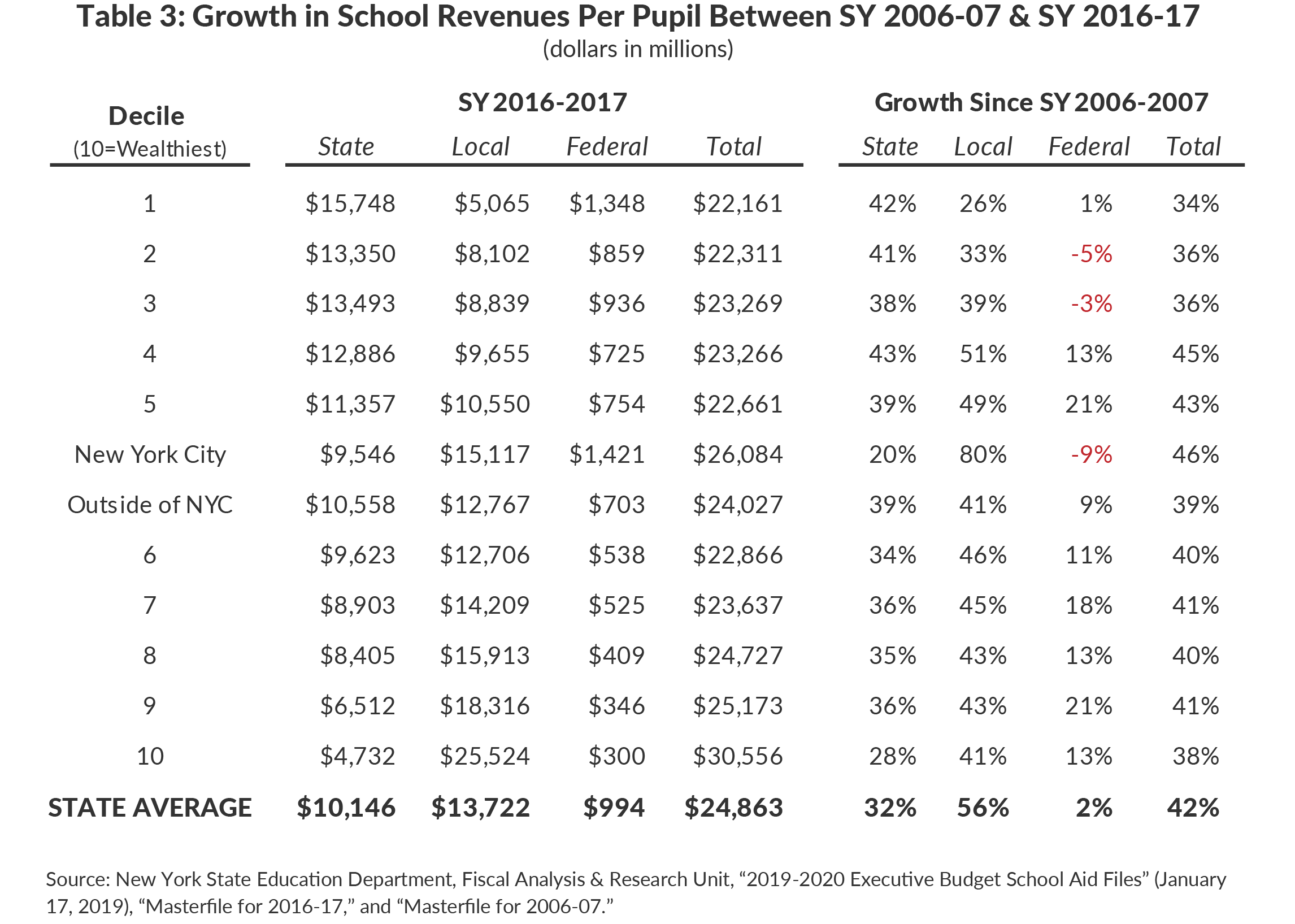 Some claim that State aid is $4 billion less than is needed to support an SBE.4 Like the analysis presented here, this claim is based on the formula that calculates the resources needed for an SBE.5 However, it differs from CBC’s analysis in that it does not reflect actual local funding. Instead, the formula calculates a hypothetical local funding level that is lower than actual local resources provided. It then assumes that the State should make up that gap.

The flaw is exemplified by 179 districts whose actual local funding are already sufficient to provide an SBE; despite this, these districts receive $2 billion in State aid and the flawed Foundation Aid formula concludes these districts need an additional $373 million in state aid to support an SBE.

New York could ensure that all districts have the revenues to provide an SBE by directing $164 million to those districts that currently do not have sufficient combined State, local, and federal funds to provide an SBE. This allocation should be prioritized during budget negotiations and State aid above this amount should be targeted to educational needs and balanced with the State’s fiscal realities.

The Foundation Aid formula includes the cost of providing an SBE for all students in each district, based on the successful schools model; this is known as the "Foundation Amount."[6] However, this model does not include all costs necessary for a school district to operate. Therefore, other costs (taken from 2016-2017 actuals) are added to the SBE costs to arrive at total costs of providing an SBE. The total costs of an SBE are compared to total revenues to determine if districts have sufficient resources to provide an SBE.

The publicly available successful schools methodology provides general descriptions of what costs are included. A request has been submitted to the New York State Education Department (NYSED) to provide a listing of the exact account codes utilized in the model to provide for a more exact evaluation. However, in order to ensure that all needed expenses are included certain costs may be double counted, which would result in overstating the amount of underfunding.