The budget allocates $20.8 billion in formula-based aid for school year 2013-14, an increase of $937 million, or 4.7%, over the prior year. On top of the formula-based aid is another $75 million for the expansion of a competitive grant program and about $300 million for other categorical program grants. The total school aid increase will be close to $1.1 billion, or 5.3%.

In the last two budgets the Governor and the Legislature agreed to a school aid cap, tied to annual personal income growth. This cap would have limited aid in the current budget to a 3% increment. Governor Andrew Cuomo began undoing the cap with an Executive Budget proposal that combined a 3% increase in formula aid with another 1.4% increase for a “one-time fiscal stabilization reserve” and other grants. The Legislature added on from there, and the cap is now broken. Unfortunately this school aid genie is likely to be hard to cram back in the bottle. The State’s fiscal fortunes have not improved enough to return to a pattern of annual $1 billion school aid increases, but it will be hard to dampen the expectations of legislators and school district officials after this budget.

Giving aid to rich and poor

The newly enacted budget sets average formula aid per pupil for school year 2013-14 at $7,760, an increase of $400. (See Table 1.) But the average can be misleading because the aid is not spread evenly among districts. While the wealthiest districts receive only modest increases, the distribution among the other 90% of the districts is not well targeted. Formula aid per student for the highest need-lowest wealth districts will increase from $13,718 to $14,511, a change of $814 or 5.9%. In the middle need-wealth deciles, districts’ aid increases range from $255 to $908 per pupil or between 6.7% and 7.9%.

If New York State is to continue to improve its fiscal footing, then school aid allocations will need to be more disciplined next year. School aid is the largest single item in the state budget. Highly targeted, substantial increases for the less affluent districts are a better way to meet pressing needs without supersizing the out-year budget gaps. 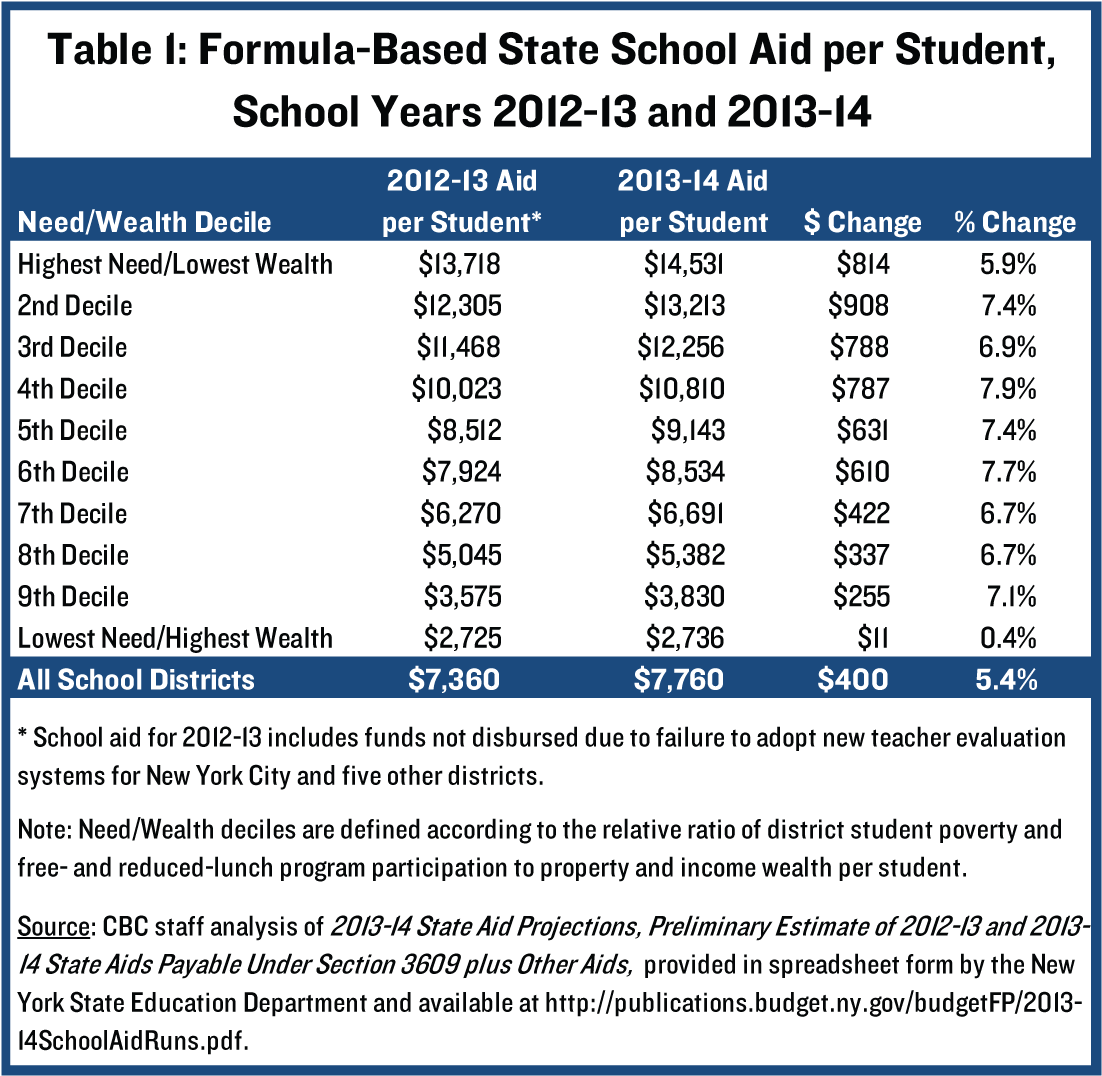 Source: CBC staff analysis of 2013-14 State Aid Projections, Preliminary Estimate of 2012-13 and 2013-14 State Aids Payable Under Section 3609 plus Other Aids, provided in spreadsheet form by the New York State Education Department and available at http://publications.budget.ny.gov/budgetFP/2013-14SchoolAidRuns.pdf.