With a new mayoral administration, a new sanitation commissioner, and an expired contract with municipal sanitation workers, now is the time to change how New York City collects trash. New York City would save about $275 million annually by redesigning municipal waste collection policies. Addressing inefficiencies in the private trash hauling system would save businesses another $26 million annually.

This substantial savings can be partially achieved with modest changes in the public and private components of local waste collection and fully realized with more ambitious ones. Some needed reforms to the municipal Department of Sanitation (DSNY) collection practices should be incorporated in the next labor contract. Other reforms will take more time to implement; the Mayor and City Council should make this restructuring a goal and begin a multiyear phase-in.

In the short term, the City should implement three changes through negotiations with the Uniformed Sanitationmen’s Association (USA) and related City Council legislation:

The three reforms above would save $96 million annually, primarily by reducing the number of workers required; the reduction would be about 600 workers or 10 percent. A contraction of that magnitude could be achieved through attrition over two years.

In the longer term, a more transformative redesign of the public and private garbage collection system is needed. Four reforms should be phased in over a multiyear period:

This report is the third in a recent series by the Citizens Budget Commission (CBC) intended to help improve municipal solid waste management. In May 2012 CBC issued Taxes In, Garbage Out, an analysis of the high fiscal and environmental costs of New York City’s predominant method of garbage disposal – long-distance shipping and landfilling.1 About three-quarters of waste managed by the municipal Department of Sanitation (DSNY) travels hundreds of miles to landfills in Pennsylvania, Virginia, Ohio, and South Carolina. CBC recommends diverting more trash from landfills through local investments in modern energy conversion facilities. Diverting more trash to local energy recovery plants would have multiple benefits: avoided expense and carbon emissions associated with transporting and burying garbage in landfills; greater production of energy using non-fossil fuels; increased metal recycling (extracted before conversion); and preserved landfill capacity.

The City has taken some actions along the lines CBC recommended. In August 2013 the City signed a 20-year contract with a private firm, Covanta, to transport 800,000 tons of garbage from marine transfer stations in Queens and Manhattan to waste-to-energy plants in Niagara, New York and Chester, Pennsylvania, near Philadelphia.2 If executed as planned, with transfer station operations projected to begin in 2015 in Queens and 2016 in Manhattan, the share of DSNY-managed trash converted to energy would triple from 10 percent to about 30 percent. However, long journeys for New York City trash would continue; Niagara is a 455-mile rail-trip from the city, and Chester is 107 miles away. Locally over the next three years the City is expanding capacity to convert food waste to natural gas at the Newtown Creek Wastewater Treatment facility from 600 tons to 76,500 tons annually.3 The City also solicited proposals in March 2012 for additional investments in emerging waste conversion technologies within 80 miles of the city but has not disclosed or acted on any responses.

In May 2014 CBC released an analysis focusing on refuse collection practices.4 12 Things New Yorkers Should Know About Their Garbage found collecting and disposing of garbage is twice as expensive for DSNY ($431 per ton) as it is for the city’s heavily unionized private-sector waste carters ($185 per ton). DSNY serves residential buildings, government agencies, and many nonprofit facilities, and more than 250 private-sector waste carters serve city businesses.5 Much higher diversion rates (that is, the share of refuse recycled) in the commercial sector, 63 percent versus 15 percent for DSNY waste, account for part of the differential; however, excluding disposal expenses, the average cost of collecting one ton of refuse and recycling in the city is $307 for DSNY and $133 for private-sector carters.

The analysis also found that collection costs are much lower for public agencies in other big cities. While comparisons of public sector waste management are difficult because cities divide responsibilities differently between the public and private sectors, the latest available data show the public-sector cost of collecting a ton of refuse was $74 in Dallas, $83 in Phoenix, $182 in Washington, D.C., $231 in Chicago, and $251 in New York City.6

The May 2014 report identified these reasons for the high costs at DSNY.

The actions needed to make waste collection in New York City more efficient can be divided into two groups. The first are shorter-term measures that can be implemented through collective bargaining and City Council legislation; an opportunity for immediate action is available because the contract with the Uniformed Sanitationmen’s Association (USA) is expired and currently under negotiation. The second are longer-term reforms that require mayoral leadership and City Council cooperation; they should be phased in and require several years for full implementation.

Mayor de Blasio and his Commissioner of Labor Relations have been negotiating contracts with unions representing the municipal labor force. Simply following the pattern of the contracts already negotiated would be a missed opportunity for both the City and the sanitation workers.

The new USA contract should change key provisions to enable greater efficiency; in exchange, a part of the savings could be applied to fund raises above the pattern. Such “gainsharing” is an opportunity for substantial taxpayer savings along with higher wages for the sanitation workers. Because many aspects of DSNY operations are governed by city law, support from the City Council is essential to achieving productivity savings. Negotiations with the USA should include garnering union support for changes to local laws that hinder reforms.

The City should implement the following three reforms in the short term: 1) promote flexibility in service arrangements to meet neighborhood needs; 2) expand use of automated trash collection; and 3) eliminate unproductive “productivity” bonuses. The second and third actions can be implemented through collective bargaining, while the first action requires cooperation from the City Council as well as union support. These short-term recommendations would save $96 million annually and permit a 10 percent reduction in the sanitation workforce, which could be achieved over two years through attrition.7 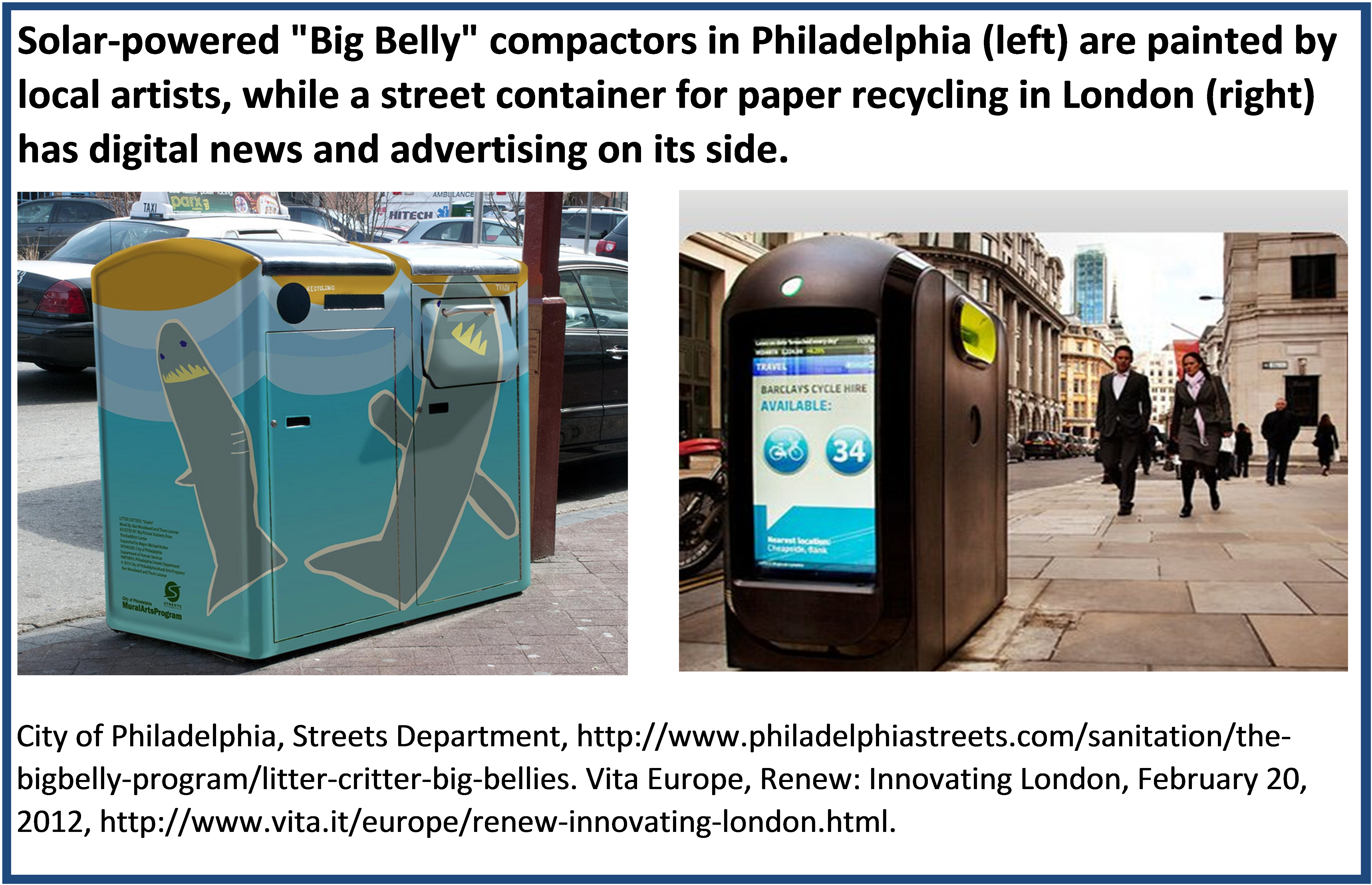 The next contract with sanitation workers is an opportunity for immediate savings, but the greatest benefits to taxpayers depend on longer-term redesign of current waste collection practices. New York City’s future waste collection system should be reconfigured based on four elements. Together these reforms would save more than $300 million annually.

In Berlin, Germany, residents pay variable fees based on bin size and the frequency of collection.31 For weekly collection, a 60-liter (16-gallon) refuse bin costs 267 euros ($346) annually, while a 240-liter (63-gallon) bin costs 407 euros ($528).32 If residents periodically require additional capacity, they can purchase bags called Mullsackes for 6 euros ($8) each.33 Recycling is free, but Berliners pay for organics collection; for example, a weekly 60-liter (16-gallon) organics bin costs 125 euros ($162) annually. These fees are set and collected by Berliner Stadtreinigungsbetriebe (BSR), a public utility owned by the city-state of Berlin responsible for solid waste management.34

In San Francisco and Berlin, PAYT charges are assessed at the building level, limiting the impact on any one household in a large apartment building; however, other cities require all households to purchase government-sanctioned bags or special tags to be affixed to the garbage they generate. In Zurich, Switzerland residents must buy “Zuri-Sacks” for non-recyclable refuse at local retailers. The bags range from 0.85 Swiss francs ($0.91) for a 17-liter bag (4.5-gallon) to 5.7 Swiss francs ($6.11) for a 110-liter bag (29-gallon).35 Residents may also subscribe to weekly organics collection from March to December and biweekly collection in January and February; for example, collection for a 140-liter (37-gallon) container costs 180 Swiss francs ($193) per year.36 In Seoul, South Korea, local retailers also sell government-mandated garbage bags, although the prices are lower and the bags are smaller than in Zurich. In one South Korean district, bag prices range from 100 won ($0.10) for a 5-liter bag (1.3-gallon) to 880 won ($0.85) for a 50-liter bag (13-gallon).37 Recycling can be placed in any plastic bag, but food waste must be separated and placed in government-sanctioned bags.

Three problems raised by PAYT are the economic impact on low-income households, the danger of illegal dumping, and the perception of a new tax. Measures are available to minimize these problems. First, the regressive nature of PAYT fees can be addressed by establishing a separate schedule of fees for lower-income households, the approach used in San Francisco. Alternatively, the City could give a limited number of free bags to households below a certain income threshold, while also targeting educational campaigns to neighborhoods with low diversion rates.

To ensure a PAYT system does not result in illegal dumping, the City should enact steep penalties and assign enforcement agents. In Zurich residents face a fine of 200 Swiss francs ($214) for illegal dumping.38 Other municipalities with PAYT have also allowed large bulky waste to remain free to dispose. Some sly New Yorkers will inevitably invent ways to avoid compliance and payment; vigilant enforcement with ongoing monitoring to identify evasion practices will be required. 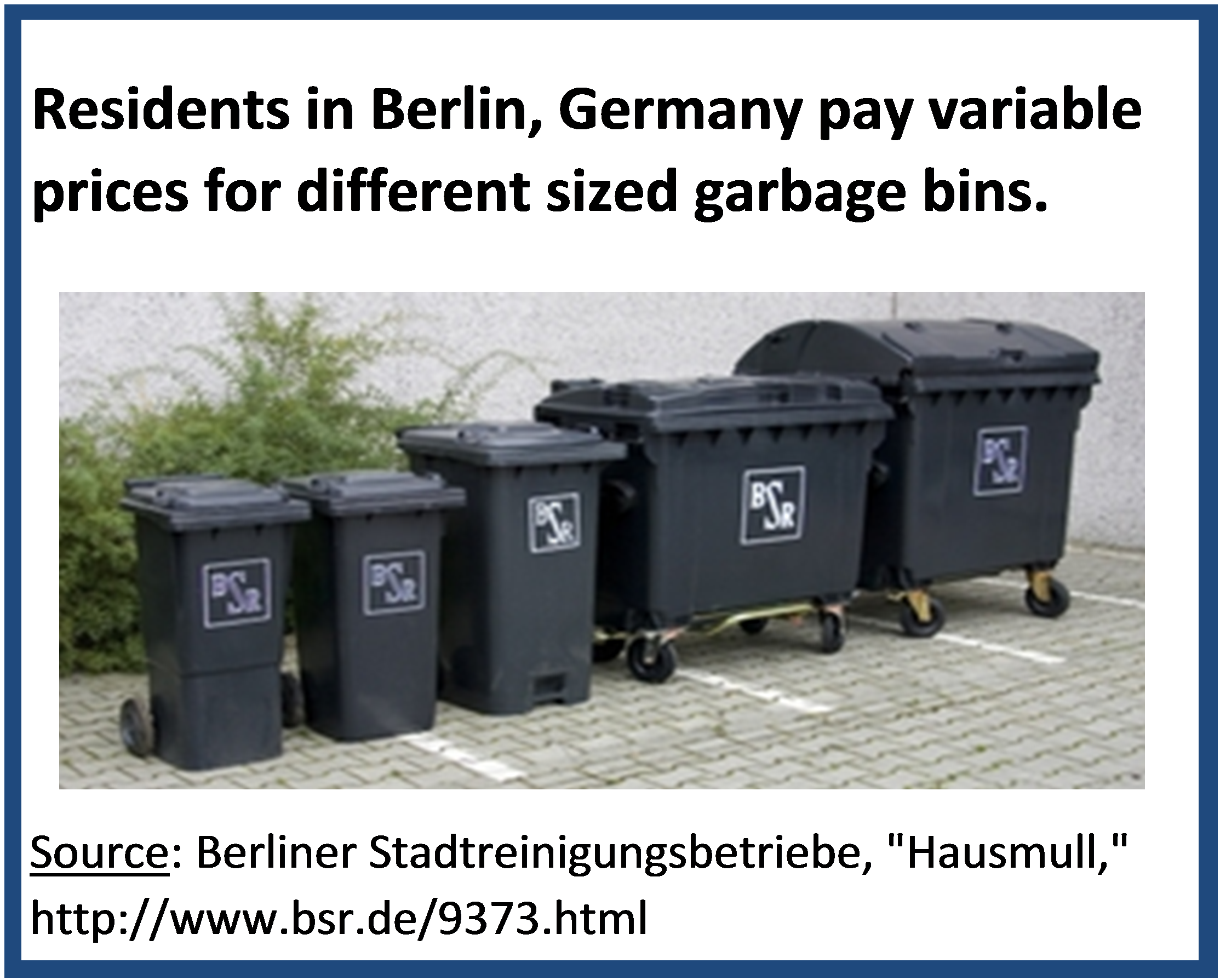 To prevent the new fees from being an added tax burden, the City could issue annual household rebates or tax credits. For instance, households in Toronto pay annual fees for garbage bins but receive an offsetting rebate.39 With the rebate, low-trash producers in Toronto effectively pay little for garbage removal. For multiunit buildings, managers pay CAD$197 ($178) annually per unit for 1.9 cubic yards of refuse disposal, a weekly average of 7 gallons, and receive a rebate of CAD$185 ($167).40 Each additional cubic yard of refuse, or an average of 4 gallons per week, costs CAD$13.67 ($12.35).

The new PAYT fees should also apply to collections from nonprofits served by DSNY. The same logic applies to nonprofits as to households – consumers should have an incentive to waste less and recycle more. The City could also consider including sanitation services in government agency and public school budgets, as is already the case for the City’s Housing Authority. Doing so would require a cost accounting of garbage removal for each government agency, which would clearly identify low- and high-generators of garbage. As an incentive to produce less waste, the City could allow agencies to retain and reallocate savings from reducing trash below a benchmark.

Along the same lines, in 2013 City Councilmembers introduced two different bills to implement a plastic bag fee. One bill would impose a 5 cent deposit and refund for plastic bags; the other would implement a 10 cent fee on plastic and paper bags.41 Under the latter proposal, the revenue would be retained by the retailer.

A study of U.S. municipalities with PAYT charges found that average refuse levels fell 17 percent after implementation, with refuse production down 6 percent and the remainder due to increased diversion.42 If New York City achieved a similar reduction in refuse and increase in recycling, the City would save $57 million annually.43 The increase in recycling would also have significant environmental benefits by reducing greenhouse gas emissions and air pollution from collection truck routes no longer needed and from avoided landfilling.

The proper and efficient removal of garbage from New York City’s homes and businesses is essential to the physical and economic health of the city. Current service standards could be maintained at a substantially lower cost and with a smaller environmental footprint.

Progress toward a new solid waste management system should begin with immediate changes in the sanitation workers’ labor contract that reduce barriers to greater efficiency along with necessary accompanying City Council actions. In the longer term the City should use managed competition for residential garbage and franchise agreements for commercial garbage to gain the savings demonstrated elsewhere. City residents should have the financial incentive of a volume-based, pay-as-you-throw fee to generate less waste, and the City’s dependence on DSNY staff for snow removal should be lessened.

The fiscal gains from the proposed measures are summarized in Table 2. A redesigned system following these strategies would yield annual savings of nearly $100 million in the short term and more than $300 million over the long term. 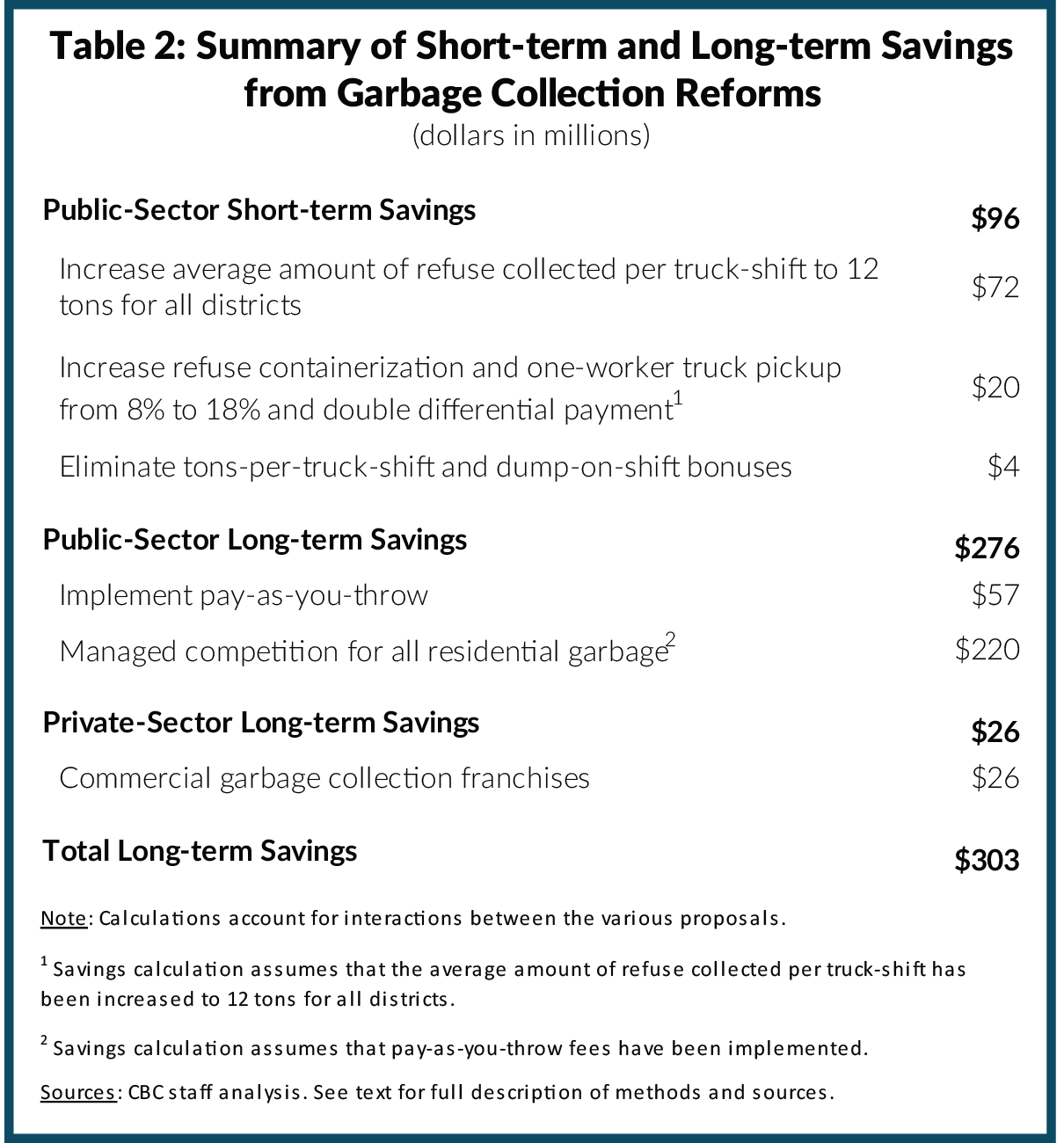