The CLCPA establishes the following goals:

2. New York energy consumption has declined over the last decade but continues to grow in the transportation sector.

However, the energy consumption trend has varied across sectors. Consumption levels by the commercial, residential, industrial, and electricity generation sectors are all even with, or slightly lower than 1990 levels. Since 2004, declines have been significant: commercial consumption decreased 35 percent, residential 20 percent, industrial 22 percent, and electricity 10 percent. The declines in consumption can be attributed to efficiency improvements in heating and cooling technologies, expanded use of LED lighting, off-shoring of energy intensive manufacturing, and improved efficiency of the electric generating sector.4 The trend in the transportation sector, which is 25 percent above 1990 levels and at the highest level since 1979, will need to be reversed to meet the CLCPA goal of further reducing energy consumption by 185 TBTU by 2025.5 (See Figure 2.) 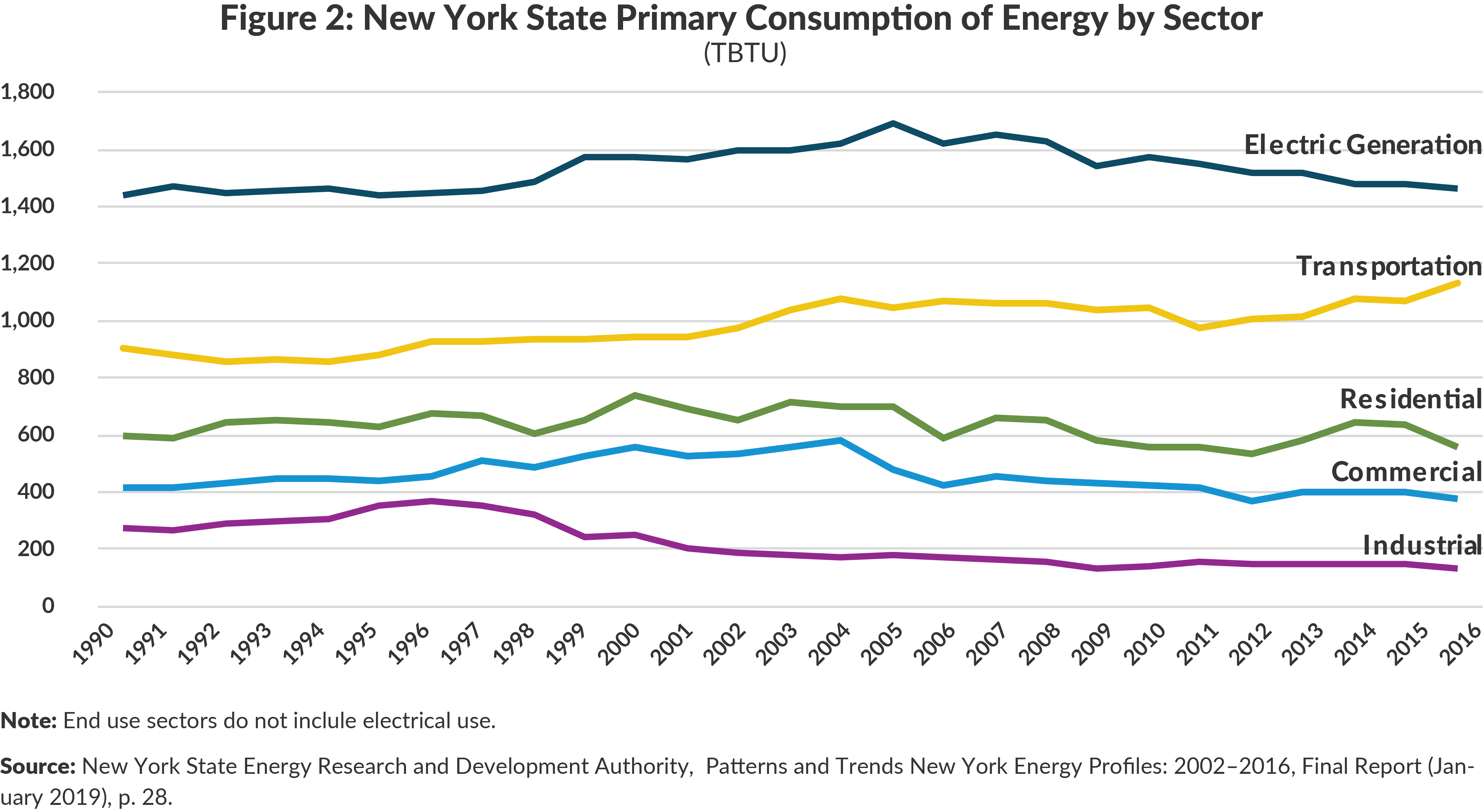 Total GHG emissions in 2015 were 8.5 percent lower than 1990 levels, with a significant decline since their 2005 peak. In order to reach the goal of 40 percent reduction from 1990 levels by 2030, GHG emissions would have to decline another 34.4 percent or 75 million metric tons from 2015 levels—outpacing the dramatic rate of decline achieved in the prior 10 years. (See Figure 3.) However, accelerating the decline in total emissions will be especially challenging because the state has already converted almost all of the “dirtiest” sources of electrical generation.

In most sectors, emissions declined or remained flat between 1990 and 2015; most notably, electrical sector GHG emissions decreased by more than 40 percent, reflecting a 50 percent reduction in GHG emissions per gigawatt hour (GWh) of electricity produced. Much of the reduction was the result of shifting from coal to cleaner natural gas-fired power plants and increased efficiency, with little or no negative impact on consumers. However, in order to achieve the CLCPA’s GHG goals, emissions from other sectors also will have to decline significantly; entirely eliminating emissions currently produced by the electrical sector would only reduce total GHG emissions by 24 percent from 1990 levels, leaving the state 16 percentage points shy of the 2030 goal. 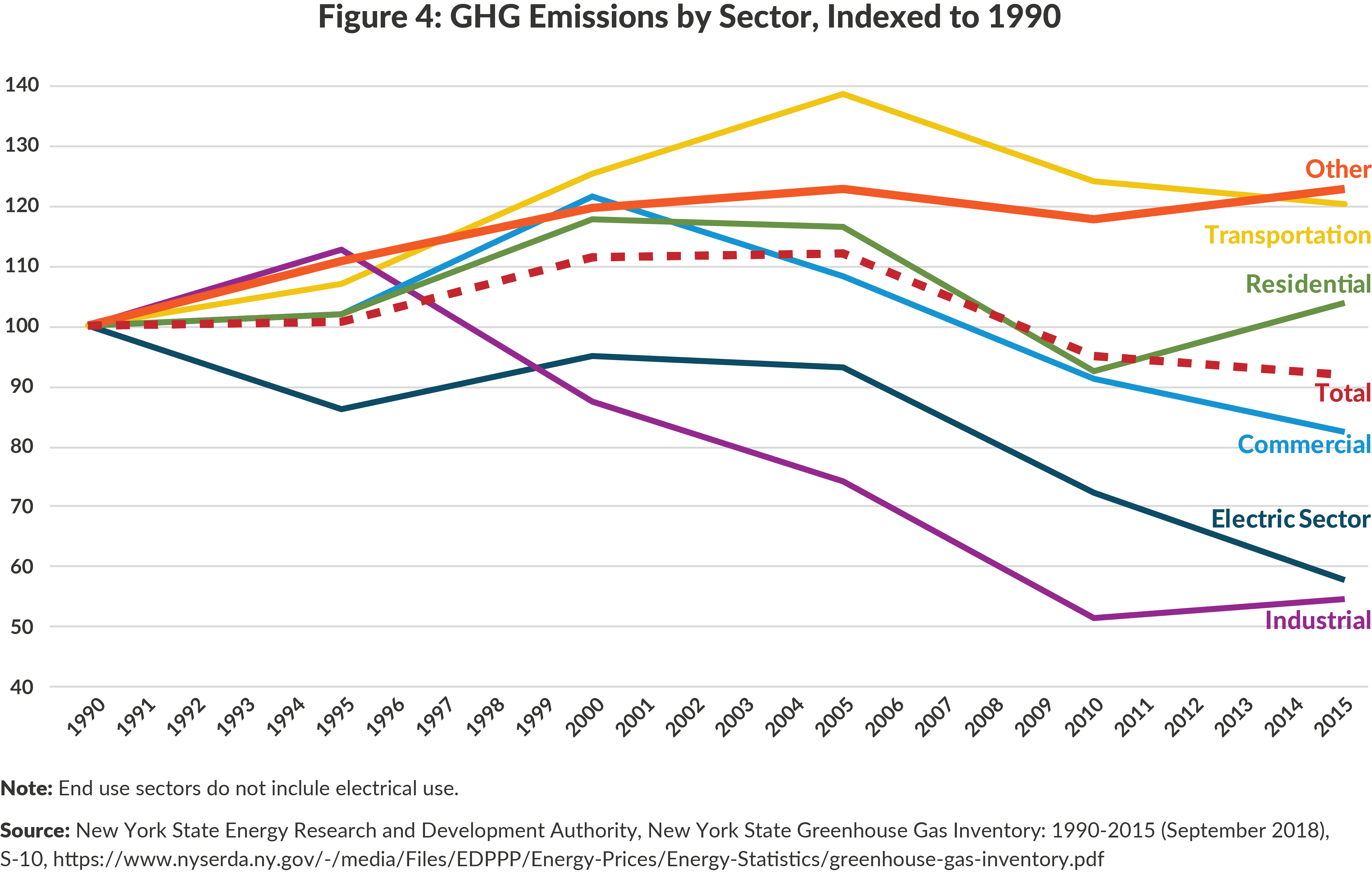 Recent announcements indicate that much of this development will be upstate wind and solar or offshore wind.9 Complicated and often contentious legal, regulatory, and political challenges are likely to slow progress, as has been the case with recent projects that have been delayed or canceled.10 Likewise, there will be technological and bureaucratic hurdles to overcome as New York reorganizes the electrical generating and transmission system. Achieving these renewable electricity goals while maintaining a reliable and resilient grid will be challenging. 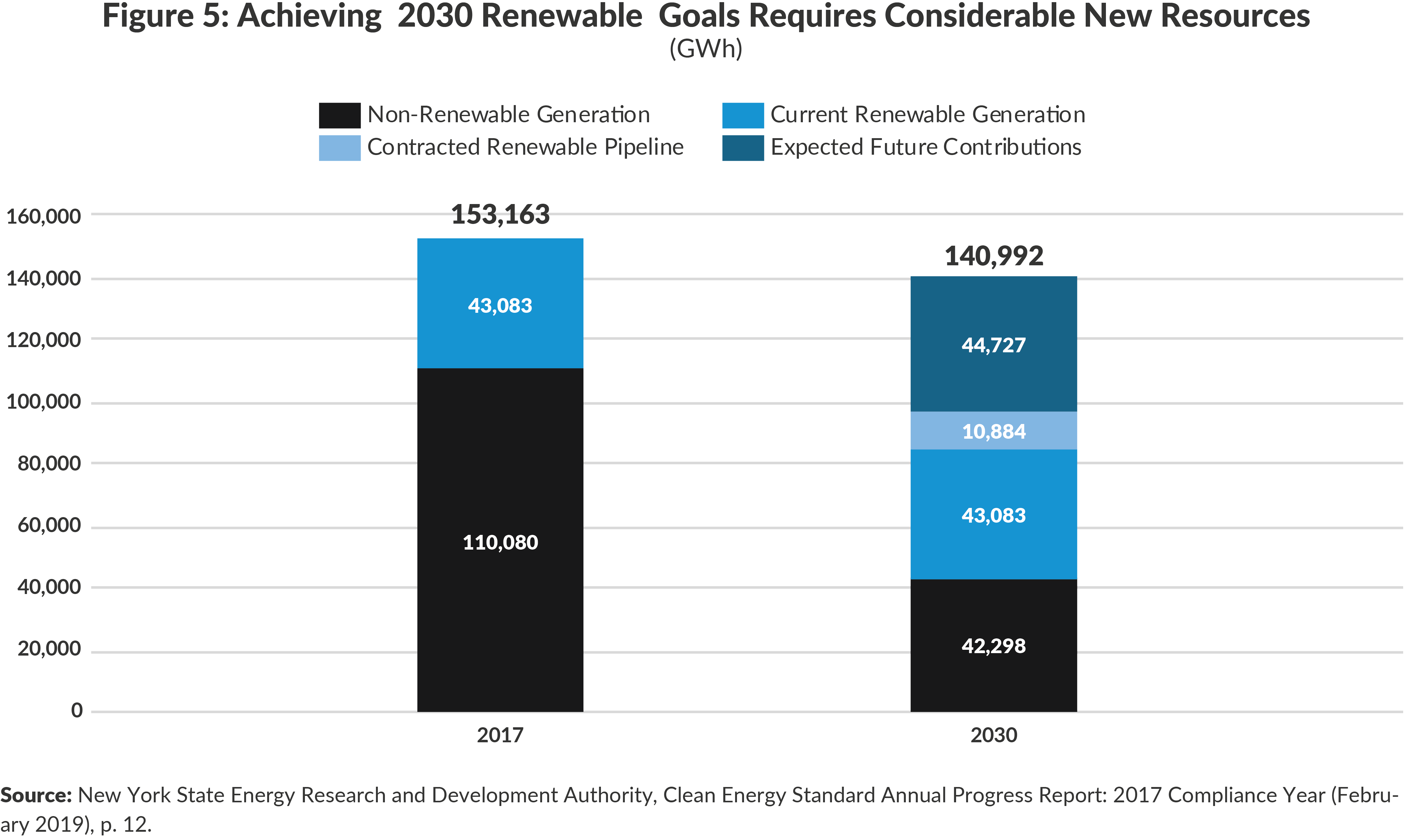 5. The CLCPA establishes a Climate Action Council (CAC) to drive implementation, with support from four other Gubernatorial-dominated entities and one independent nonprofit.

The CAC will be the driving force behind implementation of the CLCPA, tasked with crafting a plan to regulate emissions from all sectors of the economy. This council will have 22 members, including the Commissioners of Transportation, Health, Economic Development, Agriculture and Markets, Housing and Community Renewal, Environmental Conservation, and Labor; the Chairperson of the Public Service Commission; the Presidents of the New York State Energy Research and Development Authority, New York Power Authority, and Long Island Power Authority; the Secretary of State; and two non-agency experts appointed by the Governor. Three members will be appointed by the Assembly Speaker, three by the Senate Majority Leader, and one each by the minority leaders. The council will establish subject-specific panels to advise on issues such as labor and business impact and will make recommendations on regulatory actions to reduce emissions across all sectors of the economy. In addition to having representation on the CAC, the state agencies and authorities are charged with promulgating regulations to achieve the statewide greenhouse gas emissions goals, renewable energy targets, and efficiency improvements specified by the CAC.

The Department of Environmental Conservation (DEC), whose Commissioner is appointed by the Governor, regulates emissions from power plants and approves water permits needed to expand or develop new natural gas pipelines. The DEC will take on a new leadership role in implementing the CLCPA and the Commissioner is an ex officio member of the CAC. Under the CLCPA, the DEC also will have leeway to develop a mechanism to include “greenhouse gas offsets” in calculating emissions, excluding the electrical generation sector. In pursuit of CLCPA goals, the DEC is empowered to establish “legally enforceable emissions limits, performance standards, or measures or other requirements to control emissions from green-house gas emission sources,” affecting electric generation, transportation, commercial, residential, and industrial emissions.11 However, the CLCPA does not specify how DEC or other state entities will require or encourage emissions reductions.

The chief state regulatory authority for all utilities is the Public Service Commission (PSC), comprised of five members appointed by the Governor. The PSC approves rates, ensures service and safety, and approves siting of facilities. It also has the regulatory authority to require utilities to purchase a set share of electricity from renewable sources. The PSC will be represented on the CAC and is charged with ensuring that the state meets the renewable energy goals. The CLCPA empowers the PSC to suspend or modify renewable electricity requirements to ensure safe and adequate electric service.

The New York State Energy and Research Development Authority (NYSERDA) promotes energy efficiency and expansion of renewable energy sources by providing grants and financing tools. Funded by ratepayer surcharges and GHG emission auctions, it is governed by a 13-person board that includes the Commissioner of the Department of Transportation, the DEC Commissioner, the PSC Chair, and the President and CEO of NYPA, who serve ex officio.12 The Governor appoints the remaining nine members. The NYSERDA president is on the CAC.

NYISO is the only entity with a significant role in energy policy that is not controlled by the Governor. NYISO is a nonprofit entity that operates and monitors the electrical grid and oversees transmission planning. In addition, NYISO administers competitive auctions for electricity in order to ensure that it is produced in sufficient quantities and transmitted to meet consumer needs. Subject to PSC and Federal Energy Regulatory Commission (FERC) oversight, NYISO has an independent 10-person board, and is funded through a federally-approved surcharge paid by participants in New York’s wholesale electricity markets. Existing members appoint new board members. While it operates the electrical market, NYISO does not have ex-officio representation on the CAC.

6. The CLCPA will likely increase New York’s already high electricity rates, but the impact across the state and on disadvantaged communities is unclear. 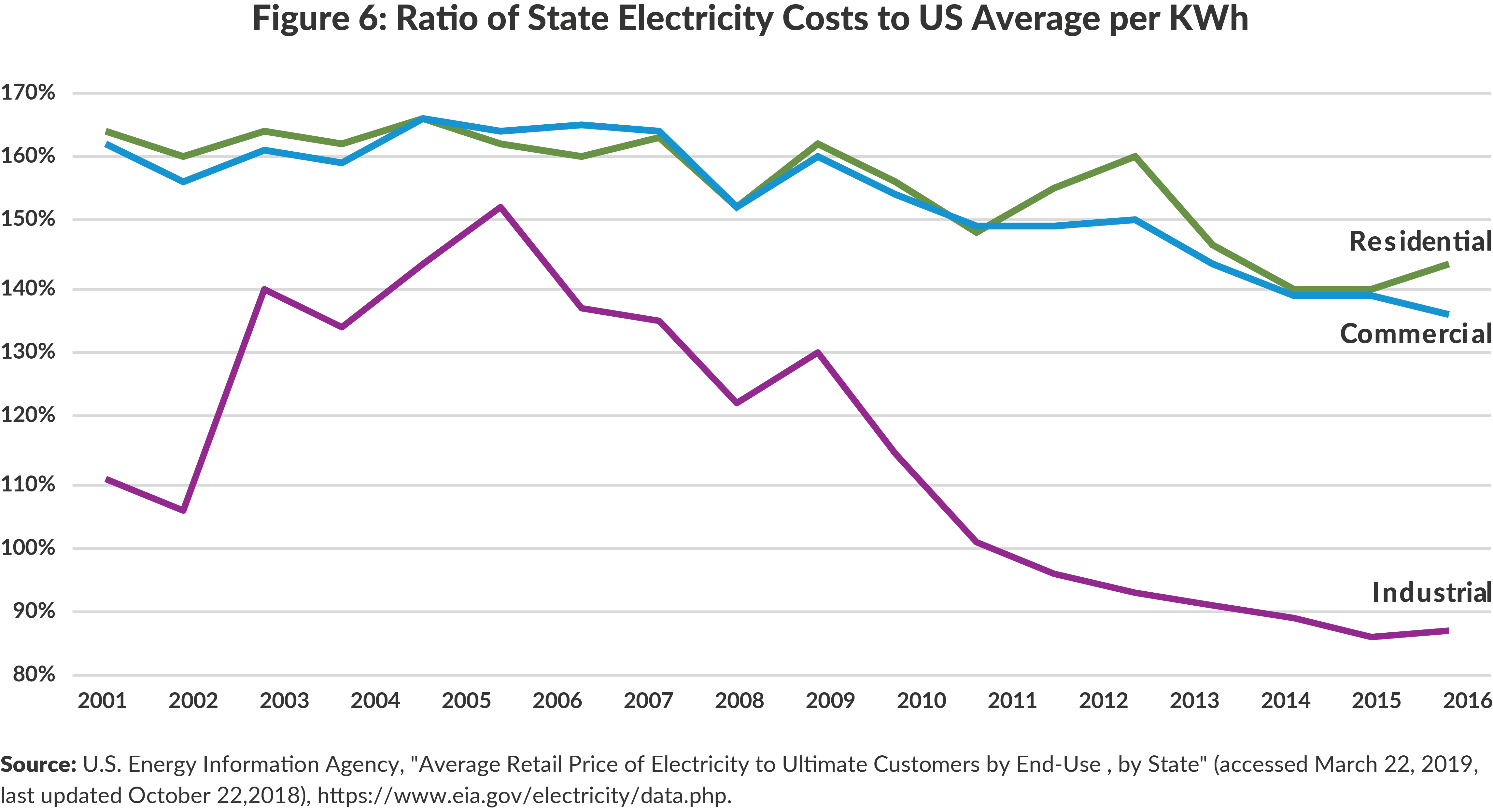 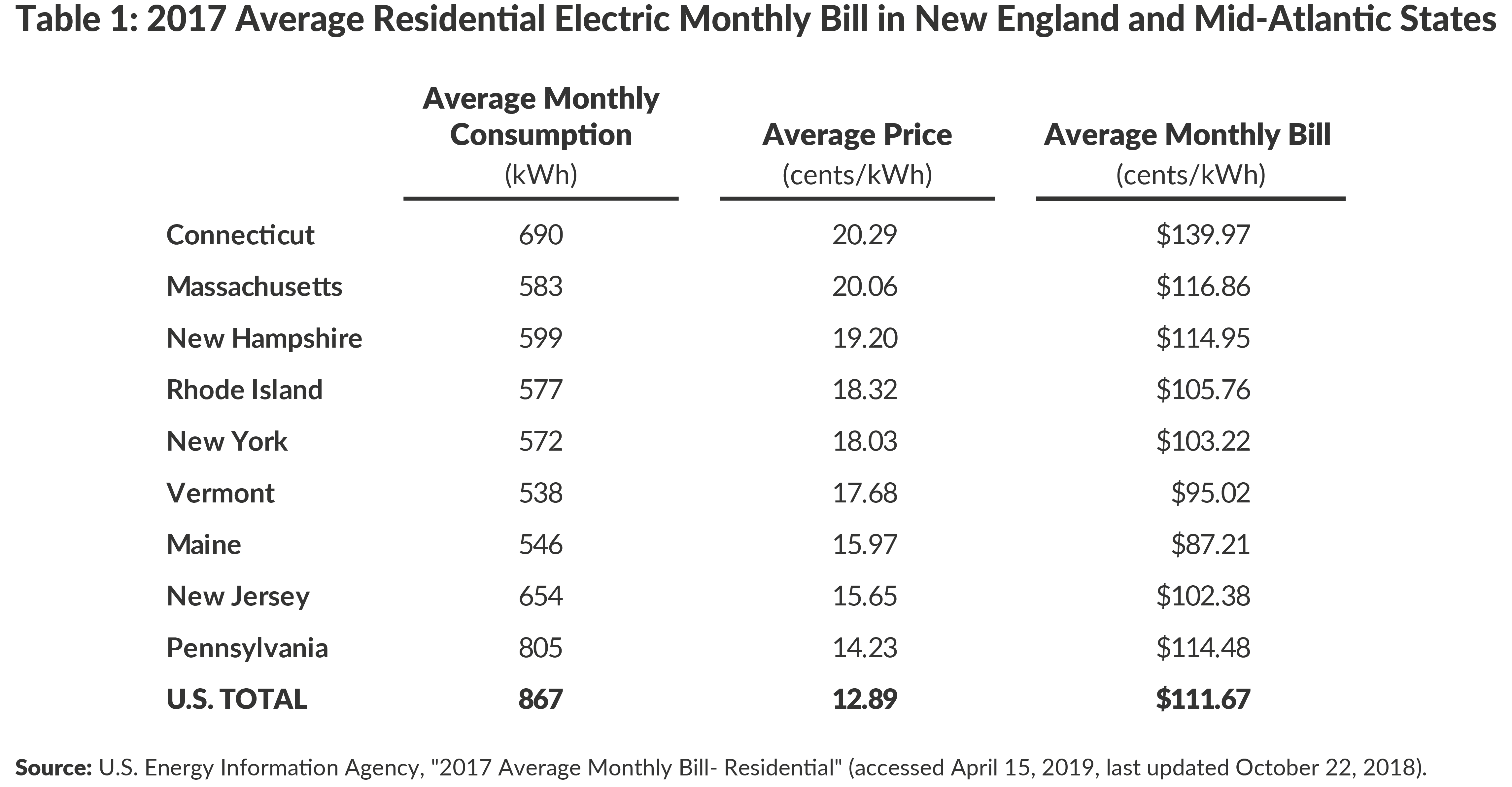 KWh costs vary significantly within the state. In 2016, the average residential price per KWh varied from a maximum of 24.91 cents for Consolidated Edison’s New York City and Hudson Valley customers to 11.50 cents for New York State Electric and Gas Corporation customers in the Southern Tier, Buffalo and parts of the Hudson Valley. (See Table 2.) As additional renewable resources come online, costs can be expected to increase, at least in the short term, and variability among regions may also increase. The CLCPA requires at least 35 percent of spending on clean energy or efficiency programs be in disadvantaged communities, many of which are located in regions with high electricity rates.13 Improving energy efficiency in these communities should decrease total consumption and blunt the impacts of rate increases.