Learning from Past Mistakes

In 2008, CBC called for the elimination of the Empire Zones jobs program amid concerns it wasted public resources.1 In 2010, New York State replaced Empire Zones with the streamlined Excelsior Jobs Program. Excelsior was designed to avoid the errors of Empire Zones but until recently it has been difficult to assess to what degree it achieves its objectives.

New data released on the State’s Open Data website suggest efforts to contain costs are working: average cost per job under Excelsior is less than half of that for Empire Zones. Additionally, a comparison of the initial three years admitting new entrants shows Excelsior allocated $470 million in tax credits over the lifetime of the benefit period, compared to $2 billion by Empire Zones.2 In order for Excelsior to continue to control costs, the state should avoid the temptation to loosen restrictions and performance requirements to entice more entrants.

Prior to Excelsior’s enactment, CBC commended the proposed legislation for adhering to four criteria: (1) targeting industries; (2) short-term benefits acting as a “bridge to profitability”; (3) pre-determined criteria for eligibility; and (4) performance-based allocation of credits.3 The reformed program identified specific traditional and growth industries for eligibility, limited the benefit period to five years, set minimum job creation requirements by industry, and provided benefits retroactively based on performance.4 In contrast to Empire Zones, which granted benefits to applicants "as of right" if they met all program criteria, Excelsior benefits must be approved on a case by case basis by Empire State Development (ESD). In addition, Excelsior had an annual program cap peaking at $250 million in 2015. 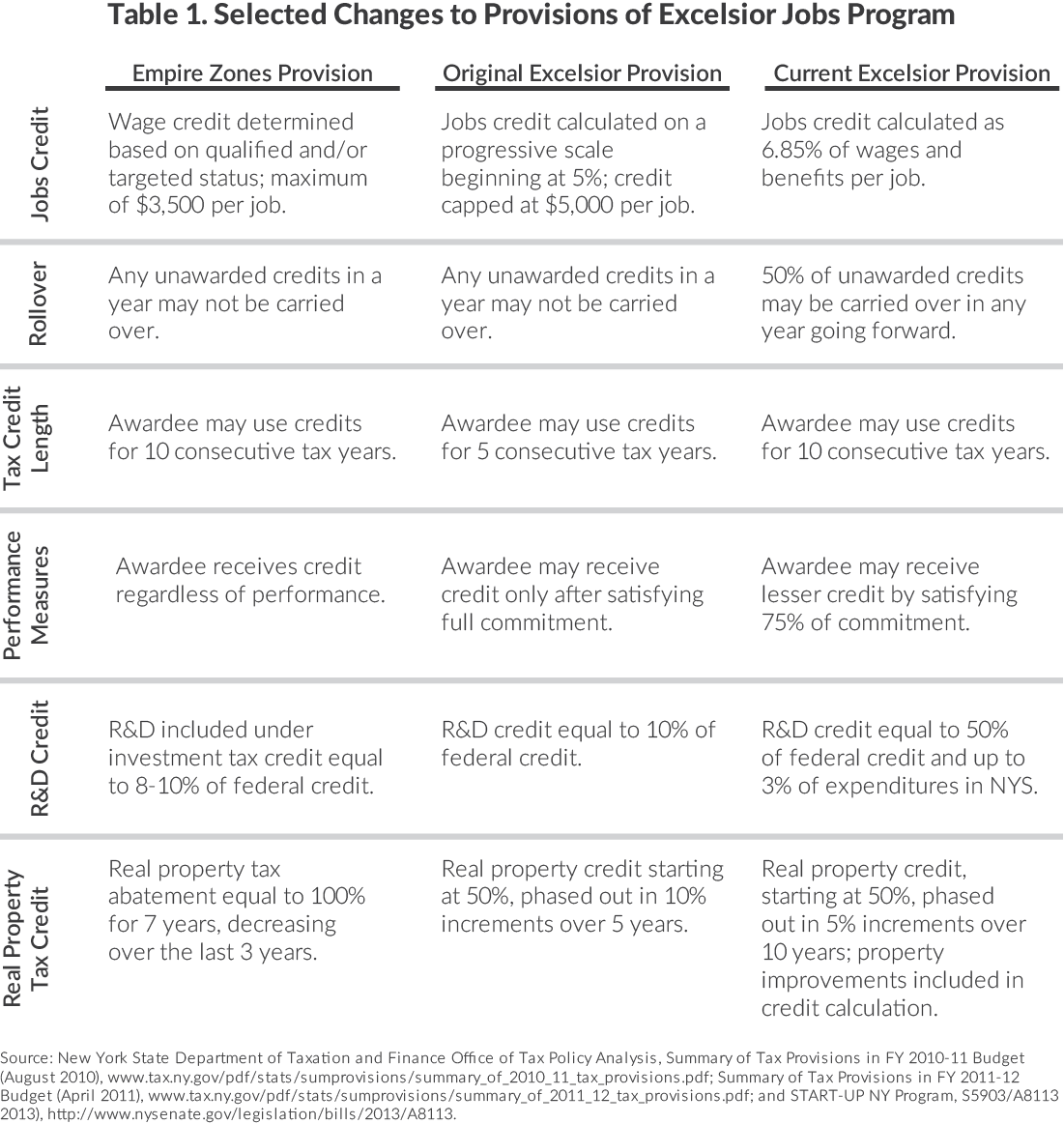 There have been three rounds of modifications to the Excelsior program since its inception, enacted as part of the 2011-2012 state budget, in 2013 legislation establishing the START-UP New York Program, and the 2015-2016 budget.

In the 2011-2012 budget, the total length of the program was extended five years, sunsetting in 2024, and the benefit period for participating businesses was extended to ten years from the original five. The original cap on total tax credits changed as well. In 2017, the cap will remain flat at $200 million until 2021, after which it decreases by $50 million each year until 2024.6

There were also changes to three of the four tax credits. To incentivize the creation of higher paying jobs, the jobs program credit was expanded to 6.85 percent of total wages, a more generous credit than was allowed by Empire Zones. The R&D tax credit increased from 10 percent to 50 percent of the participant’s federal R&D tax credit for expenditure in New York State.7 The real property tax credit was extended to ten years with a 5 percent phase out after year one. Property improvements were included in the real property credit calculation.8 ESD maintains these changes were made because initial Excelsior legislation did not fully reward higher paying jobs or investment in property.

In 2013, employment and investment thresholds for businesses to qualify for the program were reduced and ESD was allowed to roll over half of all unused credits, retroactively, in any given year to be used in any other year of the program. ESD accumulated nearly $478 million in unused credits during the first four years of the program; rolling over half amounts to an additional $239 million.9

In the 2015-2016 budget, changes were made expanding eligibility to music production and video game development companies.10

These modifications have expanded the credits for Excelsior and brought them closer to those of Empire Zones.

The total cost and unit costs of the Excelsior program are significantly smaller than those of Empire Zones at the same point in its lifetime. Four years into its existence, Excelsior has issued $25 million (5 percent) of $470 million in allocated credits, a fraction of the $343 million issued to new entrants in the first three years of Empire Zones.11 (See Table 2.) Credits issued per job under Excelsior are less than half those costs under Empire Zones.

Stricter reporting and performance requirements for receiving benefits have reined in costs and kept the Excelsior program small and targeted. Nonetheless, as benefit length, size, and program eligibility are expanded while performance requirements are tempered, it is possible participation and costs will grow for Excelsior as they did for Empire Zones.12 Over the program's lifetime, costs grew by an average of 20 percent per year.13

Easing requirements is concerning because it sets the stage for rewarding businesses falling short of performance goals. A significant number of Empire Zone participants failed to meet their targets for job creation and investment, as shown in Figure 2. Halfway through the Empire Zones program, no ESD region had more than 69 percent of participants successfully meeting 60 percent of their jobs and capital targets.15

Excelsior is a slimmer and more efficient program than its predecessor, a result of adhering to criteria for quality economic development programs and more robust reporting requirements for participants. Despite changes to the program, Excelsior’s targeting, annual cost caps, reporting, and use of performance-based credits are still stronger than its predecessor. But the modifications are worrisome for taxpayers. ESD should remain cautious and vigilant in administering and monitoring the program, and legislators should avoid additional modification to expand it; without careful guidance, Excelsior could slip back into the costly patterns of Empire Zones.

By Rahul Jain and David Copeland