New York City will soon publish the first quarter update to the financial plan. The “November mod(ification),” as it is commonly called, usually presents minor adjustments to the City’s revenues and expenses, although last week First Deputy Mayor Dean Fuleihan indicated the update would also include a savings program. Identifying recurring savings as soon as possible is particularly important this year, in part because the financial plan is also expected to reflect additional expenditures for programs that have been announced since the budget was adopted, such as spending on criminal justice and mental health initiatives.

The City budget has been growing at an accelerating pace in recent years, putting the City’s already high level of expenditure on an unsustainable trajectory. The audited financial statements released on October 31st show City-funded expenditures—those supported by City taxes, fees, and fines—grew 6.6 percent in fiscal year 2019, the highest rate since fiscal year 2012, after growing 6.1 percent in fiscal year 2018.1 With economic uncertainty looming, this rapid growth puts New Yorkers at greater risk of service cuts and tax increases during a recession.

Headcount has grown rapidly during the de Blasio Administration. (See Figure 2.) At the end of fiscal year 2019, the municipal workforce had 326,739 full-time and full-time equivalent employees, an increase of more than 29,000 since fiscal year 2014. (See CBC’s interactive feature for more details.)2

Between June 2018 and June 2019, the fiscal year 2020 budget increased by $2.3 billion, including $2.1 billion in additional City-funded expenditures, much of which reflected programs identified in the City Council’s Response to the Preliminary Fiscal Year 2020 Budget.3 The Administration added funds for Council initiatives in the April 2019 Executive Budget and the June 2019 Adopted Budget.4 Expenditure increases included $40 million in funding for Census 2020 outreach, $14 million to provide support to students living in homeless shelters, $33 million for libraries, and $43 million for parks maintenance.

Budget Characterized by High Spending and Insufficient Saving and Reserves

The City’s operating budget contains high spending levels and an inadequate commitment to building a budget cushion. In the event of revenue shortfalls due to a recession, the City may need to cut vital services or increase taxes to balance its budget; based on CBC analysis of the prior two recessions, tax revenues could be as much as $20 billion below financial plan projections over three years.7

The City’s 6.6 percent fiscal year 2019 growth was bolstered by the use of fiscal year 2018 revenues. The City used these prior year revenues—courtesy of the “surplus roll”— to spend $255 million more in fiscal year 2019 than that year’s revenues. This roll is accepted practice and allowed the City to balance its budget under generally accepted accounting principles in accordance with law, but the $4.2 billion surplus rolled into fiscal year 2020 to prepay expenses was smaller than the $4.6 billion surplus the City rolled in at the beginning of the year.8 This is concerning. The surplus roll has typically grown during economic expansions as a way to bolster the City’s fiscal cushion.9

The City has increased the amount it has set aside in annual budget reserves and in the Retiree Health Benefits Trust (RHBT), but savings rates have leveled as spending has accelerated. The Administration increased the reserves in each year’s budget from $300 million when it came into office to $1.4 billion in fiscal year 2020. While this increase is positive, these annual reserves are not like a savings account that accumulates a balance over time. They are spent down during the course of each fiscal year.

The RHBT has grown to a record $4.7 billion; however, after significant increases to RHBT balances in fiscal years 2015 to 2017, subsequent annual deposits have been smaller. (See Figure 3.) The Administration includes these funds when it discusses resources it has to ameliorate the impact of a possible recession; but, the RHBT was set up to accumulate funds to pay retiree health benefit costs. 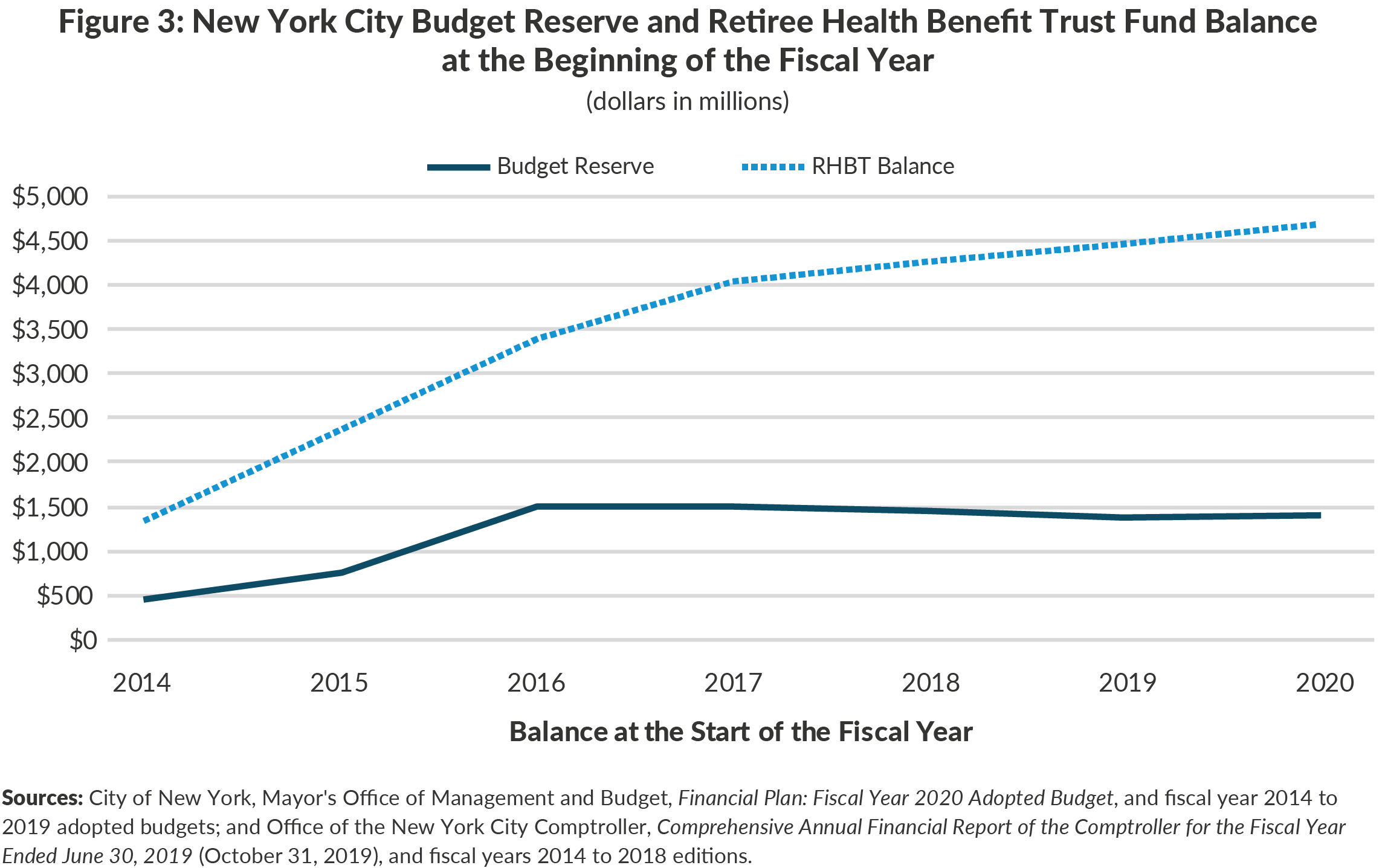 What the Mayor and City Council Should Do

The current economic expansion is the longest of the post-World War II period. The Administration and the City Council should take actions to better position the City for a likely economic downturn by: restraining spending growth, maintaining or decreasing headcount, setting ambitious savings targets for agencies, and dedicating revenue above the current forecast amount to bolstering the reserves.