Little Noticed but Significant: The Sound Recommendations of the SAGE Commission

On February 12th the Spending and Government Efficiency Commission, or “SAGE” Commission, submitted its final report to Governor Andrew Cuomo. With most state leaders and observers focused on budget negotiations, this comprehensive report on streamlining and modernizing State government was largely overlooked. But it deserves attention, and its many worthwhile recommendations should be implemented.

The painstaking work of government redesign is the only way to continue the progress toward more fiscally sustainable government that has begun during the Cuomo administration.  Before the fiscal crisis began in 2008 State spending on operations was rising rapidly increasing by 18% in just three years from 2005 to 2008. (See Figure 1.)1  Since then, due to agency budget reductions and implementation of some preliminary SAGE recommendations issued in 2011, total growth in total State operations spending from 2008 to 2012 was cut in half to 9%.2 Most recently from fiscal year 2010 to fiscal year 2012, agency spending has been held flat at about $19 billion per year. 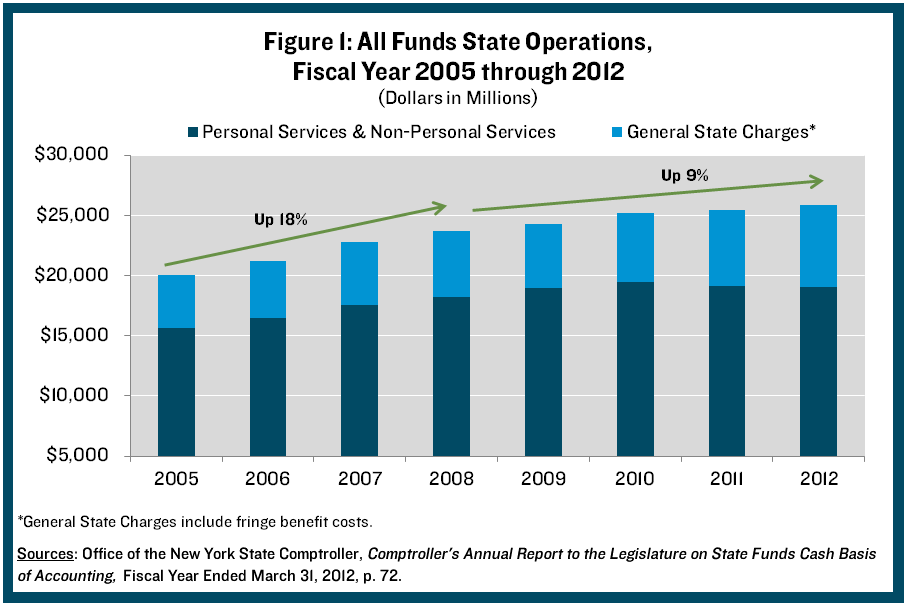 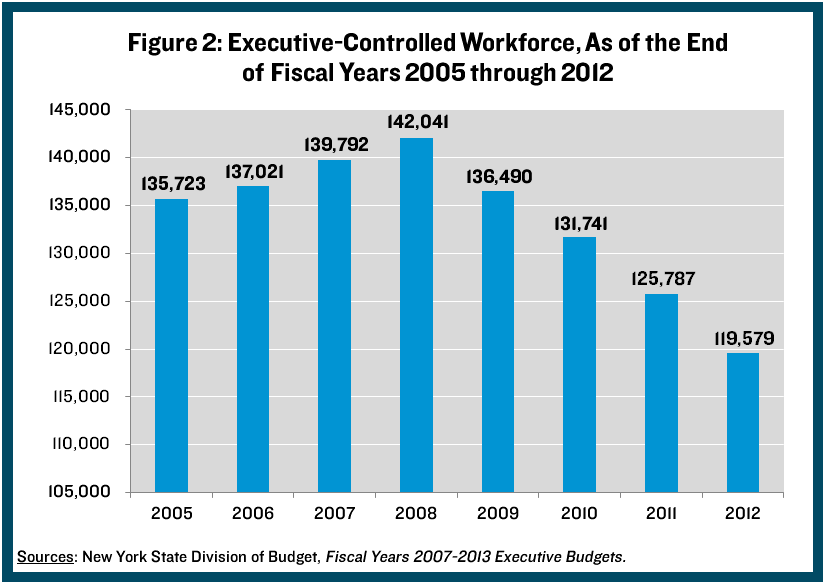 To continue progressing toward a sustainable and effective state government, the SAGE Commission makes recommendations to reorganize state agencies, reduce costs and improve service, and build a culture of performance and accountability. Among the most important plans and proposals are:

Perhaps the most important, potentially transformative recommendations made by the Commission are in the section of the report devoted to agency performance management initiatives entitled NY Performs.

The preliminary recommendations made by the SAGE Commission in December 2011 identified 16 pilot agencies for the initial development of performance management systems with the goal of bringing all State agencies onboard by June 2012 under a coordinating unit within the Division of Budget or the Governor’s office. The final SAGE report indicates a small group of management staff has been selected to oversee the initiative, but it has taken more time than originally anticipated to implement the system. The Commission took the positive step of expanding the effort to include public authorities. The new goal for full participation is December 2013.

New York has long been woefully behind in measuring performance so that taxpayers can answer the questions: “what does my state government do and how much does it cost?” The design of NY Performs is based on best practices employed elsewhere, notably in Washington and Virginia. The plan is to develop results-oriented metrics for state agency functions and make them available to the public. The ‘screen shots’ of illustrative performance metrics in the SAGE report are encouraging. The sample from the Office of Temporary & Disability Assistance, for example, includes 1) a description of the agency mission and goals as well as its scope of operations; 2) a set of key performance indicators; 3) a section that details strategic initiatives being pursued to improve performance; and 4) background facts that provide a context for judging agency operations. Other sample screenshots provided for the Office of Tax and Finance and the Department of Motor Vehicles show the system will also report on projects, milestones, and performance indicators for each strategic initiative, and that the public user will be able to drill down on each performance indicator to see an explanation of the selected performance target. As these metrics are developed and refined a high priority should be placed on outcome and efficiency, not simply process measures. Comparative benchmarks should be established and time periods and reporting intervals should be made uniform.

A noteworthy aspect of NY Performs is the emphasis on cross-agency efforts. The SAGE report highlights data “dashboards” in development for strategic priorities such as the Medicaid Redesign Team. Pulling agencies out of their traditional silos in order to focus on common goals is the most advanced form of performance management, with the potential to produce significant results for the public.3

In order to do more with less the basic business functions of state government must be reengineered. The easier, more well-travelled path is to cut with a blunt instrument while waiting for the budget climate to improve so spending can rise again. The SAGE Commission recommendations offer a far superior alternative, one to which State leaders, and in particular the State Legislature, should commit.