Variability Among Types of Households

In a previous policy brief the Citizens Budget Commission (CBC) used the concept of “location affordability” to explore the competitiveness of New York City relative to other large U.S. cities. Location affordability recognizes that the costs of housing and transportation, usually the two largest items in household budgets, are inextricably linked and that considering them together in relation to income gives a good sense of a city’s location affordability. The U.S. Department of Housing and Urban Development (HUD) has developed a Location Affordability Index (LAI) that measures these two costs and suggests that households paying more than 45 percent of their income for those costs are overburdened, signifying an affordability problem.1

In the previous analysis, CBC found the news is good for a “typical” rental household in New York City: relatively low transportation costs and high incomes make the city comparatively affordable. New York City housing and transportation costs for a typical household are 32 percent of income, the third most affordable among 22 large U.S cities.2 This analysis goes beyond the “typical” household to examine location affordability for seven different types of households. The households are split into two groups based on income levels and patterns of affordability: moderate- and middle-income households, and low-income households. The key findings are: 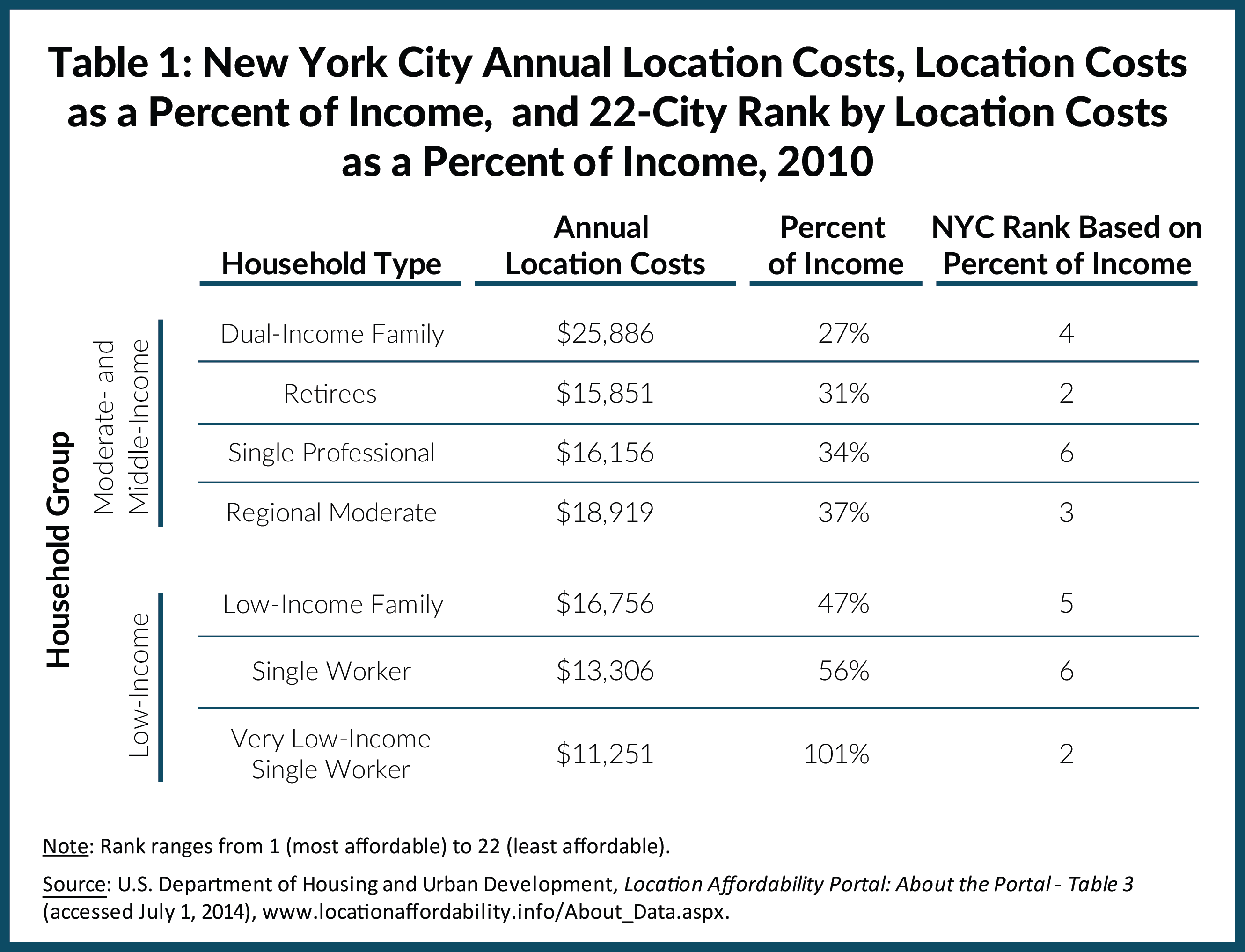 Households in the Location Affordability Index

HUD calculates an LAI for eight different types of households. The typical household used in the previous CBC analysis is based on averages for household size, number of workers, commuting patterns, and income levels in each city; for example, the typical household in New York City has 2.69 members, 1.2 commuters, and an annual income of $63,915.

The seven additional household types considered in this policy brief are constructed by HUD to capture the variety of household types in large urban areas. Figure 1 and the box below describe the characteristics of these households. Four of the households have moderate or higher annual income (the regional moderate household, a retiree household, a dual income family, and a single professional) and three have lower income (a low-income family, a single worker, and a very low-income single worker). 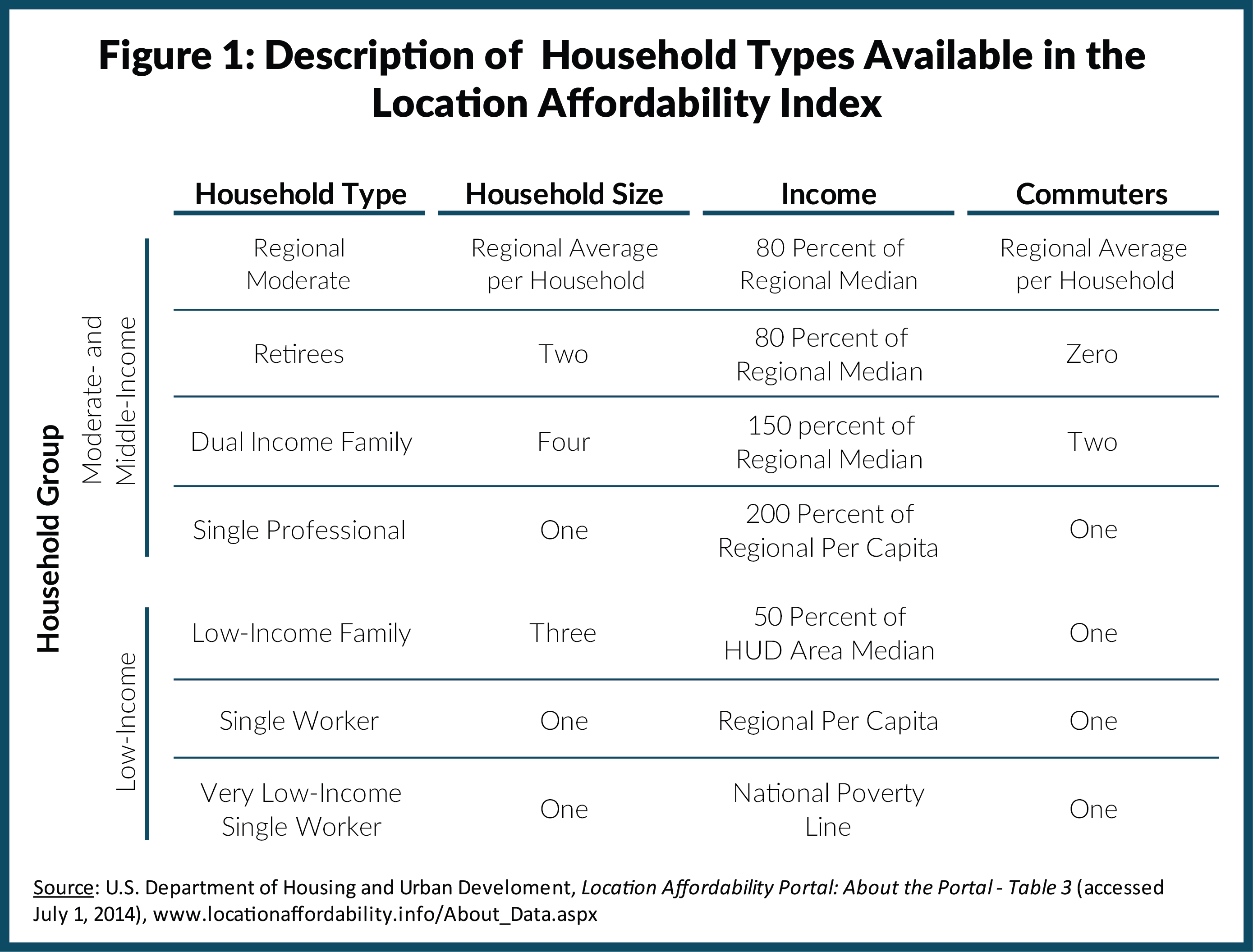 Regional Median: The median income for the Metropolitan Statistical Area where the central city is located.

Regional Per Capita: The per capita income for the Metropolitan Statistical Area where the central city is located.

National Poverty Line – The U.S. poverty threshold is calculated by the Census Bureau based on the income required to pay for basic needs, including food, shelter, and clothing, for a one-person household.

For each type of household, the three elements in the LAI – income, rent, and transportation costs – are set or estimated by HUD. The income is assumed to be the amount indicated in Figure 1, a level based in most cases on median or per capita levels in the metropolitan area. Rent for each type of household is estimated by HUD using statistical models that incorporate the characteristics of households and the rent paid by similar households in the area.3 Transportation costs are calculated based on the number of commuters in the household and the estimated cost of driving to work and using mass transit in each metropolitan area. The resulting cost estimates and the LAI are HUD’s best effort to reflect the experience of diverse types of households in each city, but they are statistical constructs rather than averages of actual households in the city.

The news on affordability for low-income households is more troublesome. None of the cities analyzed is affordable for a single-worker household or a very low-income single household. For a low-income family, only two cities, San Francisco (42 percent) and Washington, D.C (43 percent), are affordable, although very close to the threshold. (See Table 3.) The problem is particularly troubling for very low-income single households; these households, assumed to earn a wage equal to the national poverty line, require more than 100 percent of that figure for location costs in all cities but Philadelphia, where location costs are 95 percent. These extremely burdensome estimates are alarming, but it should be noted that the income assumption in the calculation does not take into account any available government subsidies (such as food stamps, earned income tax credits, and housing vouchers) for households.

New York City ranks well among large cities for each of the low-income households – no lower than sixth. This reflects the relatively low transportation costs in New York City, again highlighting the advantages of its mass transit system for all workers including low-wage workers. Nonetheless, the LAI for each type of low-income household exceeds the 45 percent threshold, pointing to the need for continuing efforts to increase affordability for these households.

Location affordability is a more comprehensive and meaningful measure than housing burden  because it considers both housing and transportation costs. Low transportation costs and relatively high income among moderate- to middle-income households make New York City affordable relative to other large U.S. cities. The findings for poorer households are more concerning: these households are extremely burdened by location costs in almost all large U.S. cities.