The national debate over the future of Obamacare highlights the important role Medicaid plays in providing health insurance for low-income Americans. In New York about 6.1 million people—roughly one of every three residents—rely on the program for health coverage. An often ignored element of Medicaid is its “supplemental payments,” money paid to hospitals and other providers not directly in exchange for giving care to Medicaid enrollees, but as institutional support to help deal with fiscal stress arising from care given to the indigent. This policy brief explains four important points about Medicaid supplemental payments in New York State:

The Alphabet Soup of Programs

Like most Medicaid payments, DSH payments are made with 50 percent federal funds and 50 percent nonfederal funds. The nonfederal share is funded by either the State or the local government affiliated with a hospital. The amount available for each state is set in federal law, based largely on historical patterns of payment in effect when a federal cap was imposed on the program in 1993. Currently New York State’s allotment is the largest in dollar amount among the 50 states, but it ranks seventh in terms of DSH payments as share of total state Medicaid spending.3

Federal rules give the states substantial discretion in how they may distribute the funds among hospitals. To be eligible a hospital must provide at least 1 percent of its services to Medicaid enrollees and cannot receive payments in excess of its “Medicaid shortfall,” defined as the cost of uncompensated care and the difference between Medicaid payments and the cost of providing care to Medicaid enrollees; hospitals with a high volume of Medicaid use must receive some DSH payment.4 Federal rules also limit the amount of DSH payments to State mental hospitals.5

New York State has designed a complicated method for allocating its federal DSH funds. The system reflects these priorities:6

Federal law authorizes—but does not require—states to make payments to hospitals to cover the difference between the Medicaid payment for services and the amount the federal Medicare program would pay for those services. The maximum amount a state can spend is set separately for public and private hospitals and for types of services.

In New York State UPL payments are authorized for voluntary hospitals for inpatient services and H+H hospitals for inpatient and outpatient services. The combined authorization for 2016 is estimated at $811 million annually with $247 million for voluntary hospitals and $563 million for H+H hospitals.10 Generally the payments are distributed in proportion to Medicaid service volume. The UPL payments to H+H are financed half by federal funds and half by funds from New York City on behalf of H+H. Thus the net gain to H+H from the UPL payments is $282 million rather than $563 million.

VAPAP was created in March of 2015 as part of the fiscal year 2016 enacted State budget as a program to help financially distressed hospitals. The initial design authorized payments in fiscal year 2016 of up to $245 million for 28 voluntary hospitals deemed in need. The program was funded entirely from the State’s General Fund with no federal financial participation.12 Just two months after VAPAP launched, it was significantly modified in response to two pressures.

First, an effort was made to use the State funds to leverage federal funds. In May 2015, VBP QIP was created, and the largest financially distressed hospitals were shifted from VAPAP to VBP QIP. Payments to these hospitals were made eligible for federal reimbursement under Medicaid by linking the payments to progress toward hospitals using “value-based payments” (VBP).

VBP is a long-term goal of federal and state policy because it improves quality of care by allowing insurers and providers to share in both risk and savings from quality improvements, rather than making payments based solely on volume of service. Because VBP arrangements are between insurers (or managed care organizations) and hospitals, VBP QIP payments are added into the rates the state pays managed care plans. Managed care plans then pass the funding on to hospitals. In this way the payments qualify for federal reimbursement, but also are subject to review by federal officials.

Initially 11 of the 28 hospitals in VAPAP were transferred to VBP QIP, and the roster has since grown to 20 voluntary hospitals. (See Figure 1.) State funding for VBP QIP has grown to $235 million in fiscal year 2018, generating another $235 million in federal funds, providing a total of $470 million for the voluntary hospitals. The State determines how the funds are distributed among qualifying hospitals; about half of the total is allocated to four Brooklyn Hospitals: Brookdale, Interfaith, Kingsbrook, and Wyckoff Heights.13 These four hospitals were recently the subject of a study to determine how best to reform health care delivery in Brooklyn.14

Second, while VAPAP was restricted to voluntary hospitals, H+H hospitals sought additional funds by seeking eligibility under VBP QIP. This was arranged by having H+H provide the nonfederal share of the payments, enabling it to qualify for an additional $60 million in federal funds.

VAPAP remains as a relatively small program serving financially distressed voluntary hospitals that are too small to have arrangements with managed care plans that could qualify for the VBP QIP program. VAPAP has also recently been used as an emergency resource for hospitals that also receive funding through VBP QIP. For example, in February and March of 2017 the State approved $30 million in VAPAP funding to three large hospitals (Interfaith, St. John’s Episcopal, and Wyckoff Heights). Altogether hospitals receive approximately $55 million annually from VAPAP coming exclusively from State funds.15 Combined, VAPAP and VBP QIP will disburse approximately $645 million annually going forward.

For 2016 total supplemental payments reached approximately $5 billion, with $3.6 billion from DSH payments, $811 million from UPL payments, and $535 million from VAPAP and VPB QIP.

Critical in their dependence on these payments are the four voluntary hospitals in Brooklyn that have received the most favorable treatment under VBP QIP. Collectively these institutions receive $314 million in supplemental payments including $249 million from VBP QIP, $52 million in DSH payments, and $13 million from the UPL program. The combined payments exceed the cost attributable to uncompensated care and inadequate Medicaid rates, yet all four hospitals are currently reporting operating losses. The unusually generous treatment is justified as a temporary measure to help stabilize the hospitals and assist in a transformation to long-term stability.

H+H hospitals also are heavily reliant on supplementary payments. They receive a total of $2.2 billion, but almost half of that sum is funds provided by New York City so the net gain is a lower $1.1 billion. Nonetheless the smaller sum represents about 76 percent of their costs attributable to uncompensated care and inadequate Medicaid rates. While H+H still incurs an operating loss, the red ink would be far worse without the supplemental payments.

Six county hospitals receive $375 million in supplemental payments, but three large ones are particularly dependent on these funds. Together the Erie, Nassau, and Westchester county facilities account for $344 million. Net of local government funding, this sum covers about 79 percent of the hospitals’ collective costs for uncompensated care and inadequate Medicaid rates; these hospitals still incur net operating losses but would be in far worse shape without supplemental funds.

Excluding the four previously noted Brooklyn hospitals, the remaining 167 voluntary institutions receive a total of $1.1 billion in supplementary payments. In the aggregate this represents 41 percent of costs attributed to uncompensated care and inadequate Medicaid rates.17 Many of the voluntary hospitals can offset losses in other ways, notably by negotiating rates with commercial insurance companies that exceed costs and provide a cross-subsidy for uncompensated and Medicaid services.18 However, the hospitals with the greatest need for cross-subsidy have the least potential. As shown in Figure 2, the hospitals with the most need due to uncompensated and Medicaid costs receive the smallest share of their revenue from commercial insurance.19 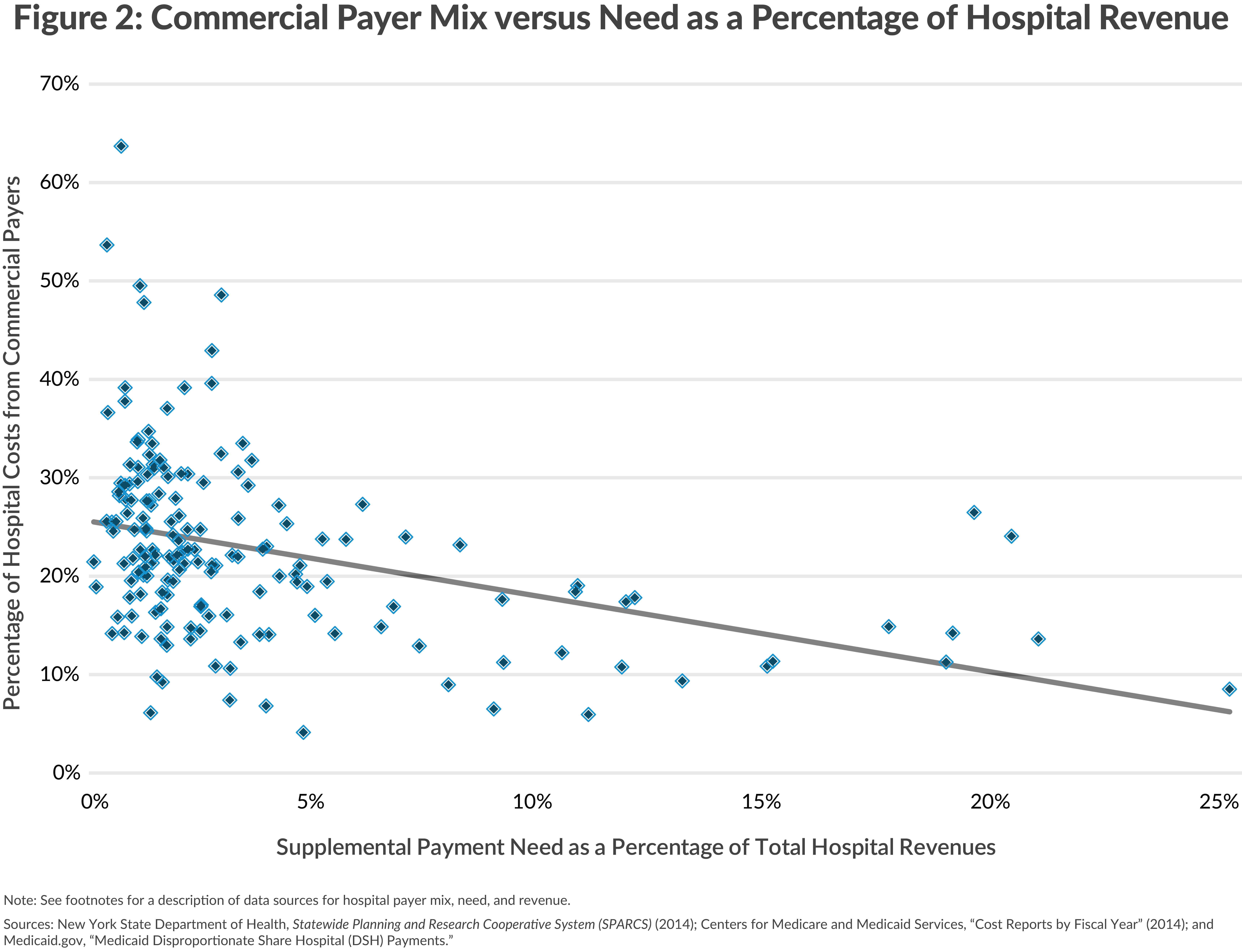 Looming Reductions in Supplementary Payments Will Jeopardize Some Hospitals

As shown in Figure 3, the recent trend has been an increase in supplemental payments. From 2011 to 2017 total payments increased from $4.1 billion to more than $5 billion, due to slow but steady increases in DSH payments and creation of VAPAP and VBP QIP. The UPL payments fluctuate due to their unpredictable nature; hospitals do not know their volume of Medicaid services in advance and estimated payments are adjusted based on subsequent reviews and audits of previous years. However, the underlying trend is a reduction in UPL payments because fewer Medicaid services are paid on a fee-for-service basis and more through managed care plan arrangements. This means lower volumes of revenue qualify for UPL payments even though total Medicaid services may not be declining. In the 2011 to 2017 period this trend may have been offset somewhat by growing Medicaid enrollment, but the decline in Medicaid fee-for-service payments is likely to be the persistent trend.

Each of the programs may shrink in coming years. The drop in Medicaid fee-for-service payments noted above will reduce the scale of UPL payments. A reasonable projection is 5 percent annual declines, creating a drop of approximately $38 million from $770 million in 2017 to $732 million in 2018.

The Affordable Care Act (ACA) reduced DSH payments because the uninsured population was expected to decrease under that legislation. Initial reductions to DSH payments were to begin in federal fiscal year 2014, but were delayed until federal fiscal year 2018. Nationwide DSH payments are currently scheduled to decrease $2 billion—one-sixth of the nation’s $12 billion federal DSH budget. The projected impact on New York is a loss of approximately $659 million.20

The size of VAPAP and VBP QIP is determined primarily by the State. In the longer term the programs are intended to be transitional, altering the structure of care in Brooklyn and moving the nature of hospital payments toward VBP. But the shorter term prospect is for continued need. The scenario in Figure 3 assumes a steady level of funding for these programs, although they could be cut if the State faces fiscal pressures and seeks to reduce its commitment. Based on steady funding for these programs, a 5 percent reduction in UPL payments, and a $659 million DSH cut, the total reduction in supplemental payments would be $697 million.

This cut would not affect all hospitals equally. Given the State policies for allocating supplemental payments, nearly all of the reduction is likely to be in payments to H+H.

Similarly the reduction in total DSH will fall exclusively on H+H. The State will retain the funds for its mental hospitals and university hospitals; the voluntary institutions are assured their share, and other local public hospitals also have greater priority than H+H. In addition, DSH need at the State University hospitals has been temporarily increasing as losses related to the acquisition of Long Island College Hospital (LICH) are reconciled; the State has increased DSH payments to it, thereby reducing funding available to H+H.21

The looming cuts in supplementary payments point to a grim outlook for H+H in particular. Its leaders already recognize this; in a 2016 report H+H projected receipts from supplemental payments will fall 36 percent from $2.2 billion in fiscal year 2016 to just $1.4 billion in fiscal year 2020.22 H+H is developing responses to its challenges including greater efficiencies and efforts to secure offsetting intergovernmental revenues, but cuts in services important to New York residents could also be a consequence.

The State should reconsider its priorities in distributing Medicaid supplemental payments. The fixed size of available federal funding means that redirection to H+H comes at the expense of other institutions. Pending cuts should not fall only on H+H, and adjustments, such as reduced payments to voluntary hospitals with limited reliance on supplementary payments, may be needed.