Earlier this month Chairman Joseph Lhota and the staff of the Metropolitan Transportation Authority (MTA) presented the board with the 2018 Final Proposed Budget and four-year financial plan. The $16.4 billion budget contains phase one of the Subway Action Plan (SAP), a five-year, $1.5 billion plan to address the system’s mounting equipment and infrastructure failures and poor on-time performance. The budget and financial plan anticipate sufficient funding from state and other resources to support the 2018 budget and portrays out-year budget deficits as manageable. However, the fact is that the MTA board is being asked to approve a budget despite unanswered questions about sources of funding, possible reductions should a funding agreement among transit agency stakeholders not emerge, or both.

Subway Action Plan and Its Impact on the Budget, Financial Plan

The MTA 2018 Final Proposed Budget forecasts expenses of nearly $16.4 billion, an increase of 4.6 percent over the prior year.[1] The increase reflects the inclusion of the first phase of the SAP. Presented by MTA Chairman Lhota in July 2017, the SAP is designed to stabilize and improve the subway system by focusing on drivers of major incidents causing delays including failures in signals, track, power, and car equipment. The SAP also includes initiatives to improve station cleanliness and customer communications.[2] The MTA has budgeted $428 million for SAP operating costs in 2018.[3] (See Table 1.)

The majority of SAP spending is due to the hiring of 2,700 additional transit workers and equipment to shorten maintenance cycles, accelerate repairs, and increase the number of teams dedicated to rapid response to infrastructure and equipment failures. Additionally the SAP includes $159 million in 2018 for increased station cleaning, improved maintenance of elevators and escalators, and a suite of communications initiatives to improve customer service, accelerate installation of countdown clocks, and publicize ongoing work.[4]

MTA revenues total $16.1 billion, an increase of 6 percent from the prior year, but are budgeted lower than expenses in 2018. Revenue growth benefits from the full-year impact of March 2017 fare and toll rate increases; however, the most significant factor is a $528 million increase in state and other funding from yet-to-be-identified sources to support phase one of the SAP.[5] Chairman Lhota announced the SAP in July 2017, and said the "most viable and fair" funding alternative would be to split the cost equally between the City and State governments.[6] Since that time, Governor Andrew Cuomo has created an advisory panel to generate proposals to address congestion on New York City streets and fund mass transit.[7] In August 2017 Mayor Bill de Blasio proposed a "millionaires' tax" for mass transit; instituting such a tax would require State legislative approval.[8]

The MTA Board likely will be expected to vote on the 2018 budget without additional funding sources secured. Implementing phase one of the SAP without additional revenues would turn the expected 2018 end-of-year cash surplus of $30 million into an end-of-year deficit of $498 million. (See Figure 1.)  The MTA insists the SAP will be scaled back to a sustainable level if new funding is not forthcoming.[9] The board should not advance a budget without either funding sources identified to support the SAP or commensurate reductions in other areas to maintain a cash balance. In the event a portion of the expected funding is realized, those elements critical to improving the subway system’s infrastructure—and not initiatives primarily geared toward station appearances and customer communications—should be prioritized. 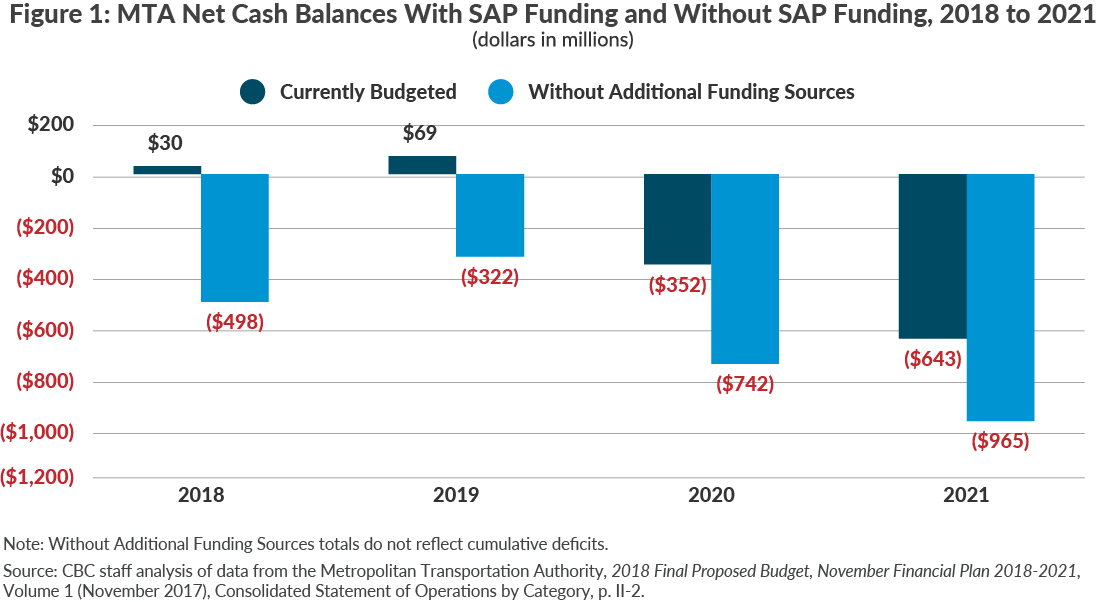 Even assuming the yet-to-be-identified funding sources are realized, the MTA expects expenses to remain greater than revenues over the life of the four-year financial plan. (See Figure 2.) (Use our Fiscal Dashboard to explore the MTA financial plan.) The agency forecasts cash surpluses of $30 million and $69 million in 2018 and 2019 followed by deficits of $352 million and $643 million in 2020 and 2021. Though out-year budget gaps are common, and the MTA has characterized these gaps as manageable, the November 2018 financial plan poses additional risks and offers fewer tools to address them than in the past. 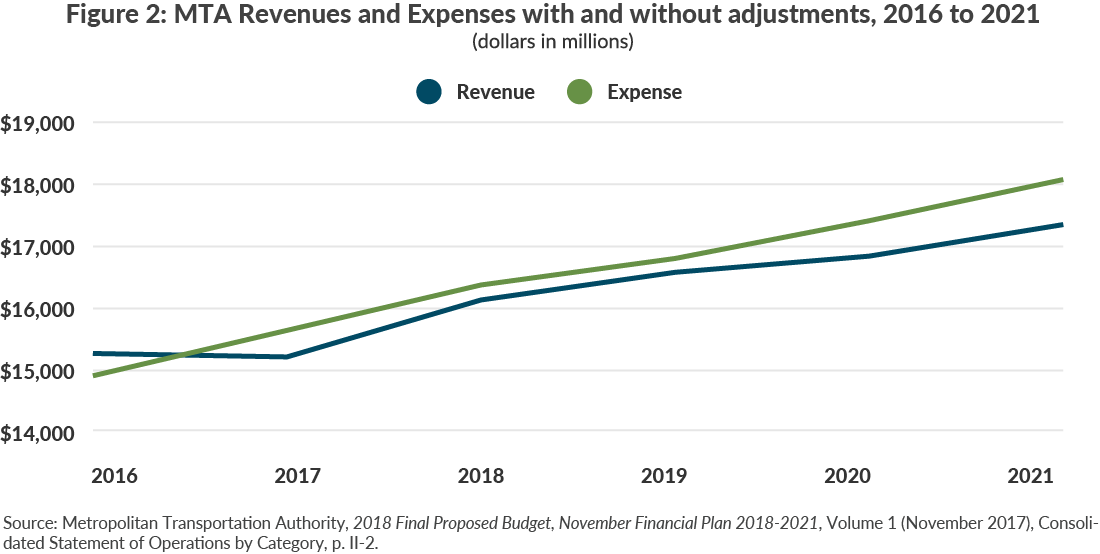 First, the November 2017 out-year deficits are larger than in any November financial plan since 2010. Gaps of $352 million in 2020 and $643 million in 2021 represent 2 percent and 3.5 percent of total operating expenses and debt service in those respective years. (See Table 2.)

Second, these greater than typical out-year gaps persist despite the MTA’s use of reserves. In July 2017 the MTA announced it would use the $135 million 2017 General Reserve and stop planned contributions to the GASB Fund Reserve and the Bridges and Tunnels Necessary Reconstruction Fund.[10] These actions provided the MTA $450 million over the life of the financial plan. The November financial plan includes the drawdown of the remaining $20 million of the 2017 General Reserve and an $80 million withdrawal from the GASB Fund Reserve in 2017. Moreover, the MTA plans on using the remaining balance of the GASB Fund Reserve to meet expenses in 2018. These combined actions provide an additional $169 million.[11] ​​​​​​

The MTA could take additional actions to maintain cash surpluses by withdrawing from the aforementioned Bridges and Tunnels Necessary Reconstruction Fund or the MTA Retiree Welfare Benefits Trust, which sets aside money to pay health insurance and other benefits for retirees. These two sources hold $679 million.[12] Pay-as-you-go (PAYGO) capital can also be converted to bonded debt to free up near-term resources. Draining reserve funds and eschewing PAYGO capital for more debt should be avoided. These actions substitute short-term resources for long-term liabilities and increased costs.

Without any new funding, the board should reject the 2018 budget as proposed. Continued implementation of the first phase of the SAP without new funding will result in a 2018 deficit. If the MTA intends to scale back the SAP to match available funding, specific details need to be provided to enable the board to make an informed decision.

Even if City and State leaders agree on a new funding source, the board must tread carefully when considering this and future financial plans. Despite actions to moderate out-year deficits—suspending payments to Bridges and Tunnels capital reserves and retiree health care reserves—the MTA's budget gaps are larger than at any point since 2010. Several downward revisions since November 2016 have reduced forecasted revenues by nearly $1.3 billion for the 2017 to 2020 period.[13] These revisions have occurred during a period of continued economic growth. A downturn in the coming years would exacerbate the situation and leave the MTA with fewer options.