New Revenues and the Path to Sustainable State Spending

In the current debate over Governor Andrew Cuomo’s proposed budget for fiscal year 2011-12, some advocates have characterized the Governor’s plan as relying too heavily on spending cuts and not enough on new revenues. In fact an analysis of fiscal developments since the onset of the national recession three years ago reveals that in the coming fiscal year the State will have $11.7 billion in revenues attributable to actions taken since the start of fiscal year 2008-09, a sum larger than the $7.8 billion in recurring cuts proposed by the Governor.[1]

The Sources of the Budget Gaps

The $9.5 billion gap addressed in the Governor’s plan is caused by a combination of decreased revenues and rapidly growing spending.[2]  Due to the national recession that hit in 2008, New York’s tax base has contracted over the past three years resulting in an $8.5 billion reduction in base tax collections in the current fiscal year. (See Figure 1.) The economy is expected to improve in the coming fiscal year, but base tax collections will still be about $4.5 billion less than when the recession began. 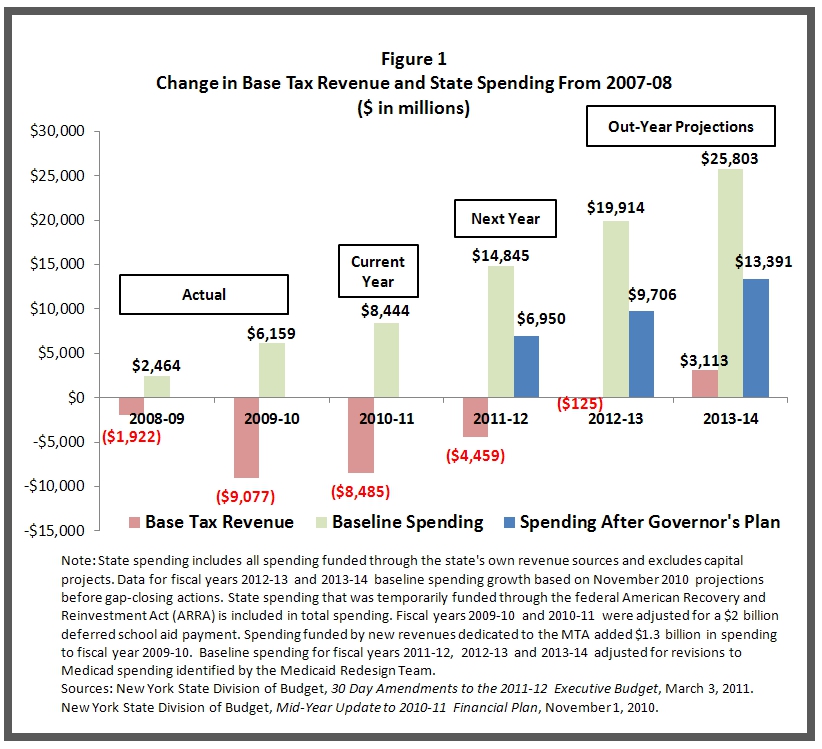 Over the past three years New York has sustained this spending growth, despite a shrinking tax base, by enacting various revenue enhancements and using temporary resources. New York currently benefits from $19.4 billion in revenue enhancements and temporary revenues. (See Table 1.) The majority of this sum, $11.7 billion, derives from actions that increased existing revenue streams or created new ones.  Among these revenue enhancers, the largest is a temporary income tax surcharge on individuals earning more than $200,000, which is projected to bring in $5.0 billion in the current year. While this surcharge has captured the most attention, another $5.5 billion in enacted revenue measures impact a wider spectrum of residents and are permanent. The largest of these is a new payroll tax imposed in 2009 in the region served by the Metropolitan Transportation Authority, yielding $1.4 billion in the current fiscal year. Other actions include increased assessments on hospitals, expanded revenue from lottery sales, an increased cigarette tax rate, higher fees and fines, and the elimination of various corporate tax “loopholes.”

In addition to new and increased revenue streams, the state also has used non-recurring revenues, (“one-shots”) such as monetary transfers from public authorities. Other one-shots include the use of prior year reserves and shifting the timing of tax collections, refunds and credits. The current fiscal year benefits from $1.1 billion in such one-shots. Lastly, New York, along with every other state, continues to benefit immensely from the federal American Recovery and Reinvestment Act (ARRA) – more commonly referred to as the federal stimulus package. This year the state has $6.6 billion from ARRA, largely in the form of enhanced federal funding for Medicaid. 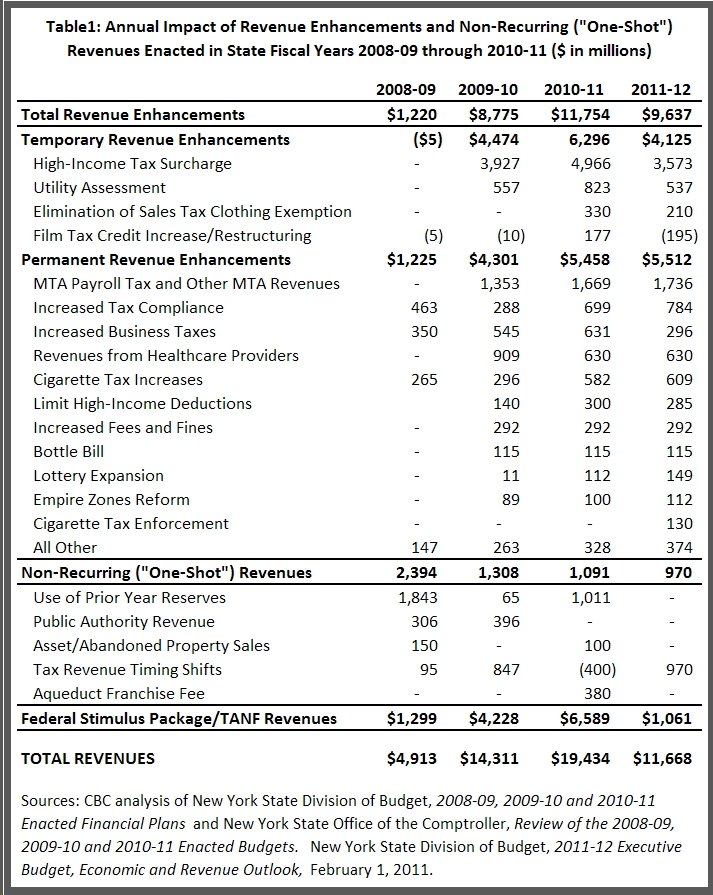 Revenue in the Governor’s Plan

Any discussion of new tax increases to close next year’s budget gaps should recognize revenue enhancers already in the 2011-12 financial plan. Fully $9.6 billion in revenue enhancements enacted since fiscal year 2007-08 will benefit next fiscal year. Another $970 million in non-recurring revenues from deferred business tax credits will further cushion the need for spending cuts next year. Combined with $1.1 billion from soon-to-expire ARRA funding, total enhanced and temporary revenues next year are $11.7 billion. Without these revenue measures, the gap for next year would be $21.2 billion. The Governor’s Executive Budget proposes $395 million in new revenue enhancers – largely from improved tax compliance and lottery expansions – and $450 million in one-shot revenues. The Medicaid Redesign Team further proposed $370 million in new taxes, assessments and charges on healthcare providers. If the $11.7 billion in continued revenues were counted in the gap-closing plan, revenue actions would amount to more than half of the Governor’s gap reduction proposals. (See Figure 2.) 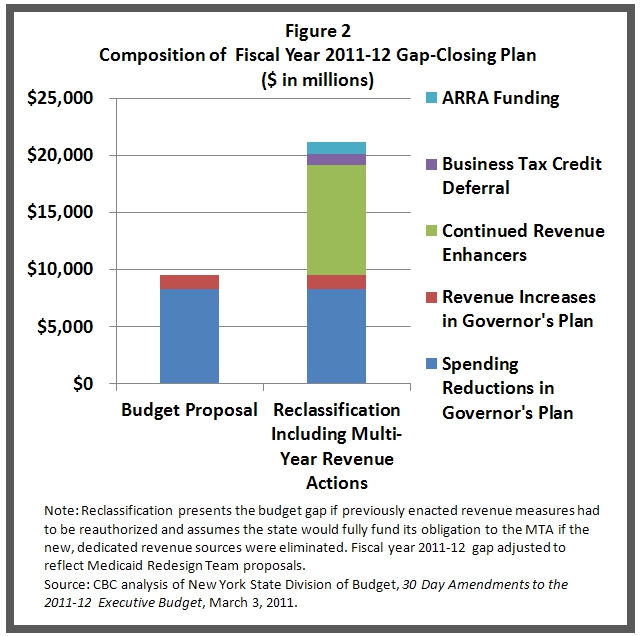 If the Governor’s budget is enacted as proposed, state-supported spending next year will be $6.9 billion higher than in fiscal year 2007-08. While it was sound fiscal policy to enact temporary revenue measures in response to a sharp and sudden downturn, it is now time to allow these measures to phase out and to begin to restructure spending commitments. Allowing spending to grow far more rapidly than the state’s tax base is simply not sustainable. In order to avoid a perpetual reliance on one-shot revenues and tax increases, spending growth must be more closely aligned with long-term revenue growth.