New York Led the Nation in Education Spending in 2012

New U.S. Census data show New York maintained its position as the top per-pupil spender among states on public elementary-secondary education in 2012. New York spent $19,552 per student, compared to $10,608 on average nationally, and $16,274 and $17,266 on average in the neighboring states of Connecticut and New Jersey, respectively. 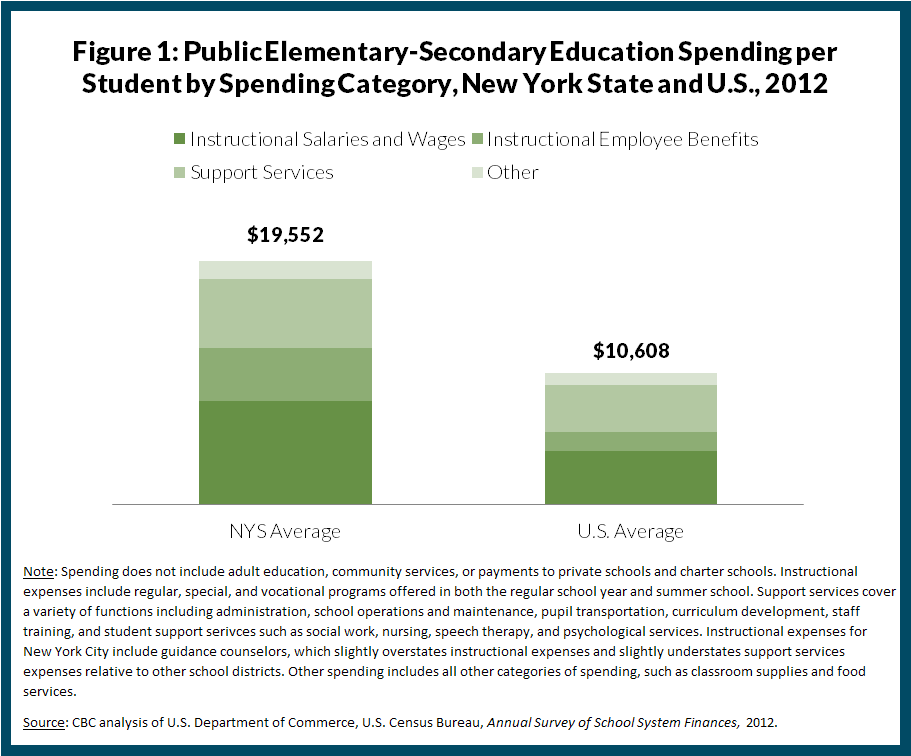 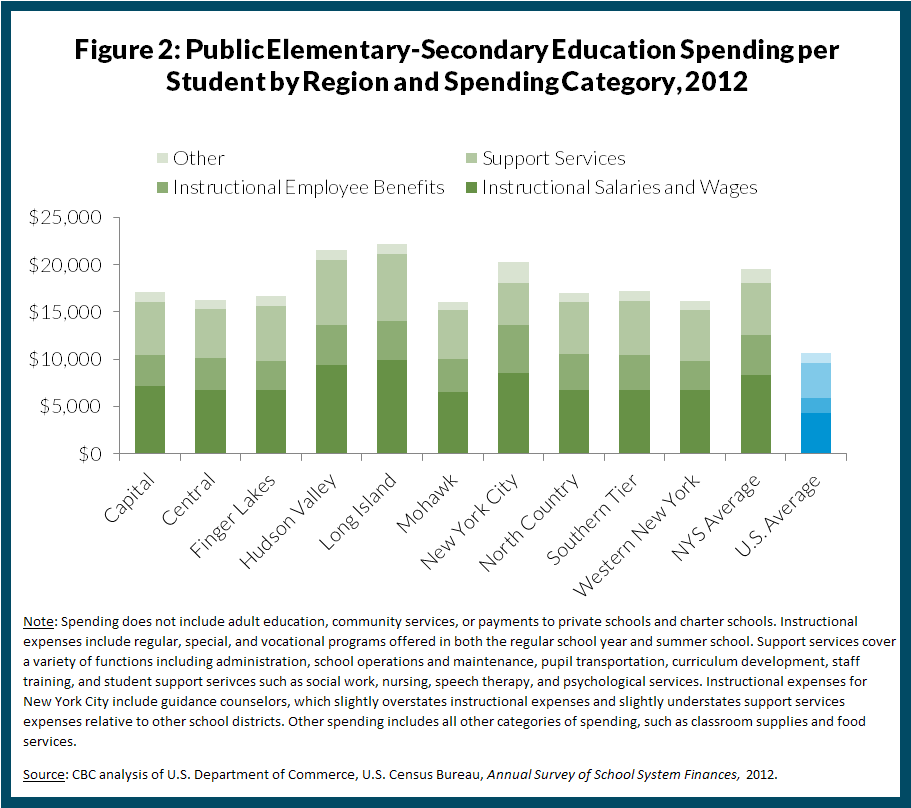 Variations in compensation and fringe benefit costs are also evident. On Long Island districts spent $9,948 per pupil on average on instructional salaries, 132 percent above the national average. Instructional employee fringe benefit costs were 158 percent higher, averaging $4,056 per pupil compared to $1,573 in the U.S. Fringe benefit costs in New York City were the highest among the regions, averaging $5,102 per pupil, in part because most districts in the state require some contribution to health insurance premiums from employees, while New York City does not.[1]

Not only are the costs of fringe benefits in New York high relative to national norms, they have been growing faster than other categories of spending. From 2011 to 2012, total public elementary-secondary spending grew 2.5 percent, but the cost of fringe benefits for teachers rose 6.8 percent, creating a squeeze on district budgets. (See Table 1.) In comparison, instructional salaries and wages increased from $8,196 to $8,313 per pupil, or 1.4 percent, and non-compensation related spending for instruction, for example, classroom supplies and materials, decreased from $1,129 to $1,037 per student, a reduction of 8.2 percent. 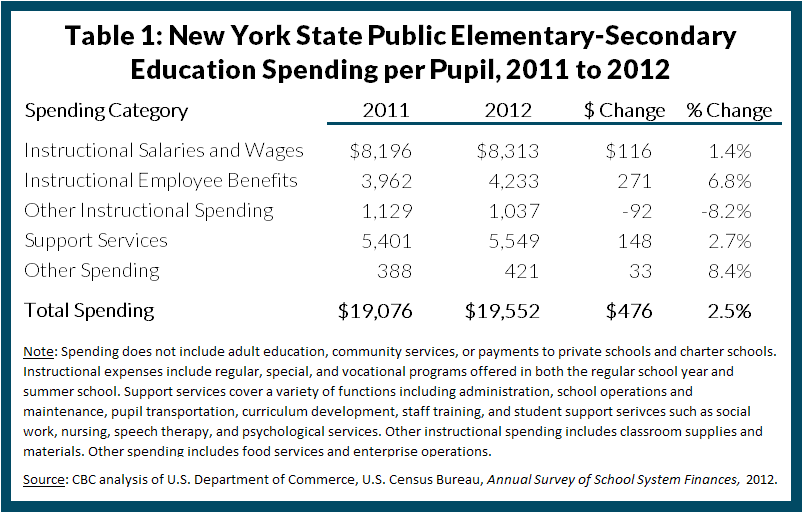 Higher growth rates for fringe benefits had to be accommodated by school districts in all regions of New York. Districts in Western New York experienced a 10.2 percent increase in instructional employee fringe benefit cost per pupil, the largest year-to-year increase. (See Table 2.) Costs in the Hudson Valley and Long Island grew 9.9 percent and 9.6 percent, respectively, and all other regions except New York City increased at least 7 percent. To compensate, spending on instructional salaries increased at lower rates or fell, and instructional supplies spending was reduced in every region. 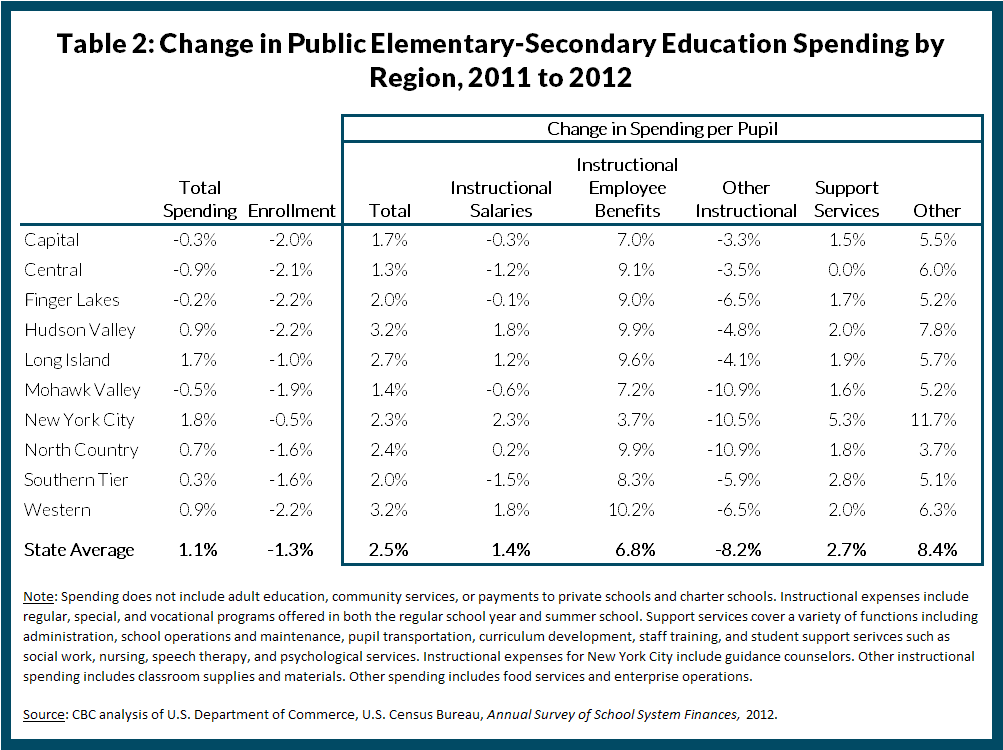 Although New York is the top spender among states, every school district in New York made budgetary decisions that affected per-pupil spending across a variety of categories.