Governor Andrew Cuomo has set a 2 percent spending growth benchmark for State Operating Funds (SOF); however, in the last few years, spending has grown in excess of 2 percent. The Executive Budget for Fiscal Year 2021 does, in fact, hold spending growth below 2 percent; however, it is dependent on $2.5 billion in Medicaid savings that have yet to be identified.1 The Governor has convened the Medicaid Redesign Team to identify plans to reduce spending by this amount, stipulating that the State will make across the board cuts if the target is not met. Absent these savings SOF spending would increase 4.2 percent.

SOF spending includes disbursements for state operations, local aid, and debt service supported by State revenues. It excludes federal funds, over which the State has little control, and capital investments, which are separately reported and best evaluated over a longer period of time. Accordingly, it is the best measure of State spending choices and has been the focus of spending control under Governor Cuomo.

To derive these figures, CBC adjusts spending as reported by the Division of Budget (DOB) to provide a more accurate picture of annual spending by accounting for:

Similarly, beginning in fiscal year 2017, new School Tax Relief (STAR) recipients receive their benefits as  personal income tax credits, instead of as state-funded property tax exemptions.4 In the same year, all New York City personal income tax STAR benefits were reclassified from spending to a state tax credit. Under the Fiscal Year 2020 Budget, all STAR exemption recipients have their benefits frozen at current levels unless they shift to the tax credit program. In addition, the State required that all homeowners with incomes of more than $250,000 receive STAR benefits as an income tax credit. In the Fiscal Year 2021 Executive Budget, the Governor proposed to lower that threshold to $200,000. While residential property owners will continue to receive the same benefits, the reclassification from an expense to a personal income tax credit results in a reduction of $1.5 billion in SOF spending.

Other actions decreased reported SOF spending by $345 million in fiscal year 2021, including shifting State support for the State University of New York (SUNY) from SOF to capital funds, delaying a repayment to the New York Power Authority (NYPA), shifting certain costs of the New York State Energy Research and Development Authority (NYSERDA) off-budget, converting tuition assistance payments from an expense to a transfer, and converting the reimbursement for rent stabilization enforcement in New York City to an offset against revenues dispersed to the City. 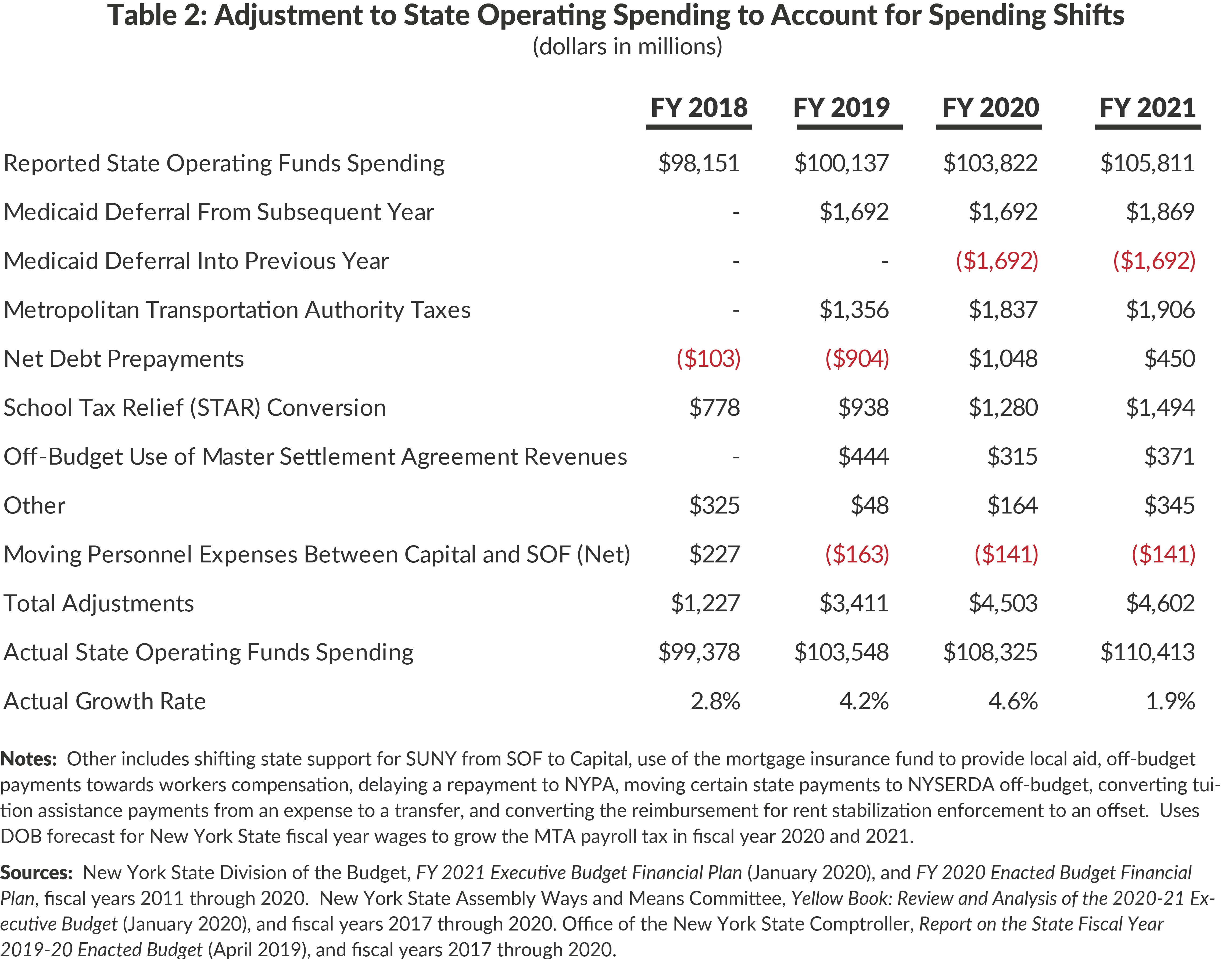 These shifts and reclassifications undermine transparency and make year-to-year comparisons challenging. While spending reform measures were sufficient to keep SOF growth to 2 percent early in Governor Cuomo’s tenure, significant spending increases, most notably in education and Medicaid, drove spending beyond 2 percent in the last three years. In fiscal year 2021 proposed spending growth is under 2 percent, but is dependent on $2.5 billion of unspecified Medicaid cuts. As the Legislature considers the budget and its wish list, it should be mindful that spending already is larger than it appears.