In fiscal years 2021 and 2022 New York State faces potential gaps of $8 billion and $15 billion , respectively, while New York City confronts potential gaps of $1.6 billion and $6.9 billion.1 Improving the fiscal outlook for both the State and the City primarily requires controlling expenditures and advocating for federal aid. Some State and City policymakers have suggested increasing taxes; however, any consideration of tax increases should include the impact on State and local economic competitiveness. In particular, City taxpayers in some cases are subject to high combined state and local tax burdens. New York is an outlier in having substantial local corporate franchise taxes (CFT) and personal income taxes (PIT) layered on top of State taxes, and tax increases may potentially increase out-migration of the high-income earning taxpayers upon which State and City budgets rely. Also, despite an increase in the number of millionaires in New York State since the 15-year temporary personal income tax surcharge was originally adopted, New York’s share of the nation’s millionaires and their income has decreased since 2010.

Incorporated businesses operating in New York State are subject to a 6.5 percent State CFT.2 The tax is calculated based on the portion of a company’s total sales that occur in New York.3 New York State’s 6.5 percent rate ranks 26 of the 46 jurisdictions  (including New York City and Washington DC) that impose the tax. New York’s competitors almost all have higher rates—rates are 10.05 percent in New Jersey and 9.99 percent in Pennsylvania. Only Florida is lower at 4.5 percent. However, companies operating in New York City are also subject to the local New York City CFT of 8.85 percent on business conducted in the City. In addition, businesses operating in the Metropolitan Transportation Commuter District (MTCD), which includes New York City, and Orange, Rockland, Westchester, Putnam, Dutchess, Nassau, and Suffolk counties, are also subject to a Metropolitan Transportation Authority (MTA) surcharge of 28.9 percent of their State tax liability based on business conducted in the MTCD. Businesses subject to New York State, New York City, and MTA corporate franchise taxes can deduct City taxes from State taxable income, resulting in an effective State tax rate of 5.92 percent and an effective MTA tax rate of 1.71 percent. (28.9 percent times 5.92 percent).  The sum of the State effective tax rate (5.92 percent), City rate (8.85 percent), and MTA taxes (1.71percent) is 16.49 percent on businesses operating in New York City. This is the highest CFT rate in the country, more than 35 percent more than the second highest rate levied in Iowa.4 (See Figure 1.) 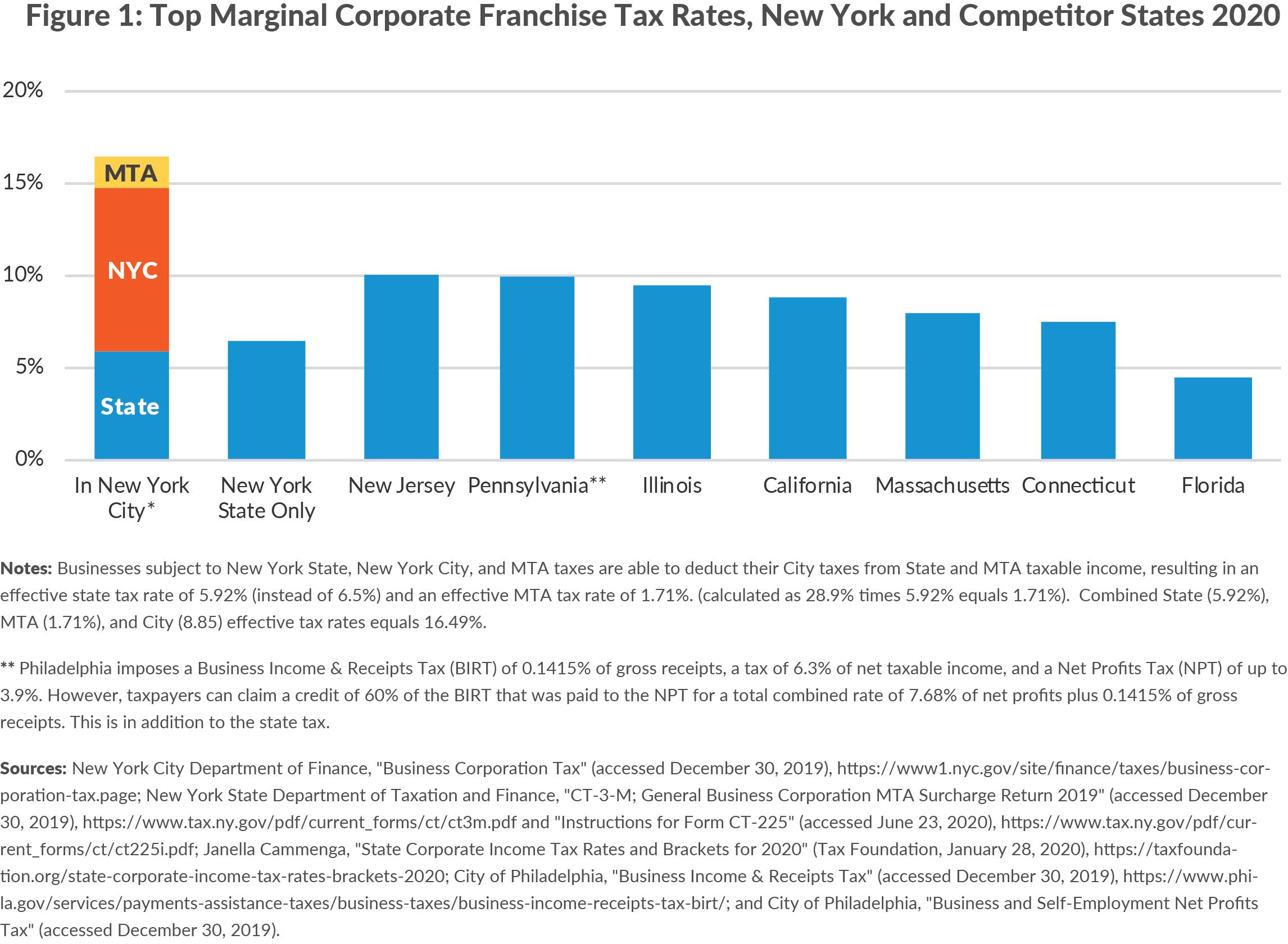 New York State imposes a top PIT rate of 8.82 percent on married couples filing jointly with incomes greater than $2.2 million annually. In comparison, California’s top state rate is 13.3 percent and New Jersey’s top rate is 10.75 percent. As shown in Table 1, top marginal tax rates in other regional and national competitor states are below those of New York. Florida and Texas do not levy a PIT.

New York City residents are also subject to a local personal income tax with a top rate of 3.876 percent imposed on married couples with taxable incomes in excess of $90,000.5 When combining rates, the top PIT rate imposed in New York City is 12.696 percent, which is the second highest in the country. In addition, recipients of pass-through income and self-employed taxpayers working in the MTCD are subject to the Metropolitan Commuter Transportation Mobility Tax—a tax on income— at a top rate of 0.34 percent. (See Table 1.) 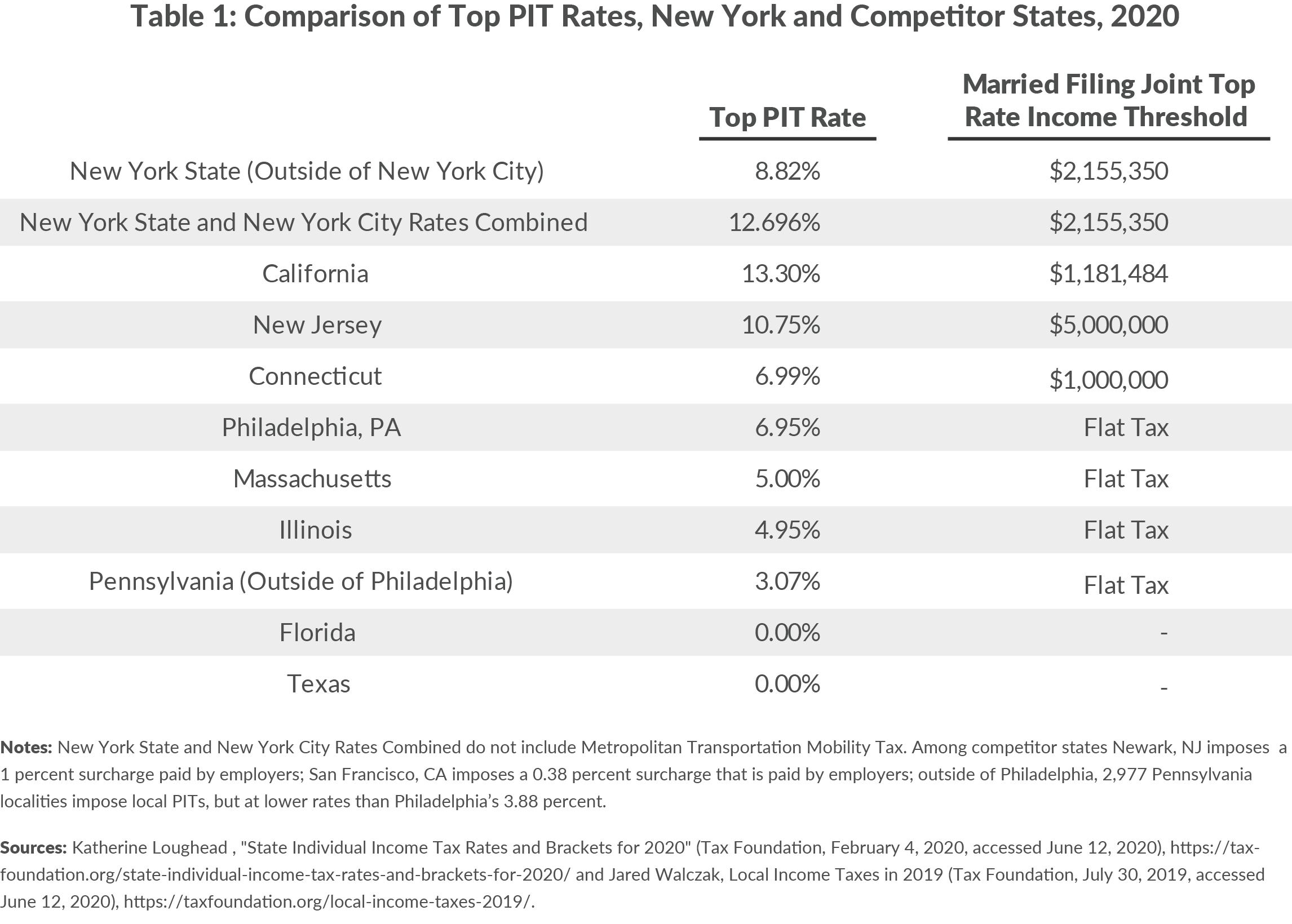 Between 2010 and 2017 the number of United States tax filers with adjusted gross incomes of $1 million or more (millionaires) increased 75 percent, which is more than 50 percent faster than growth in New York. In 2010 New York’s share of millionaires was 13 percent compared to 7 percent in Florida. Between 2010 and 2017 New York’s share of the nation’s millionaires decreased by 15 percent (to 11 percent share), while Florida’s increased by 26 percent (to a 9 percent share). (See Table 2.) The decreasing share of millionaires may be caused by a number of factors, including personal income tax rates. It is concerning because New York State and New York City are very dependent on tax revenues from millionaires, with almost 40 percent of personal income tax revenues coming from this group of taxpayers.6 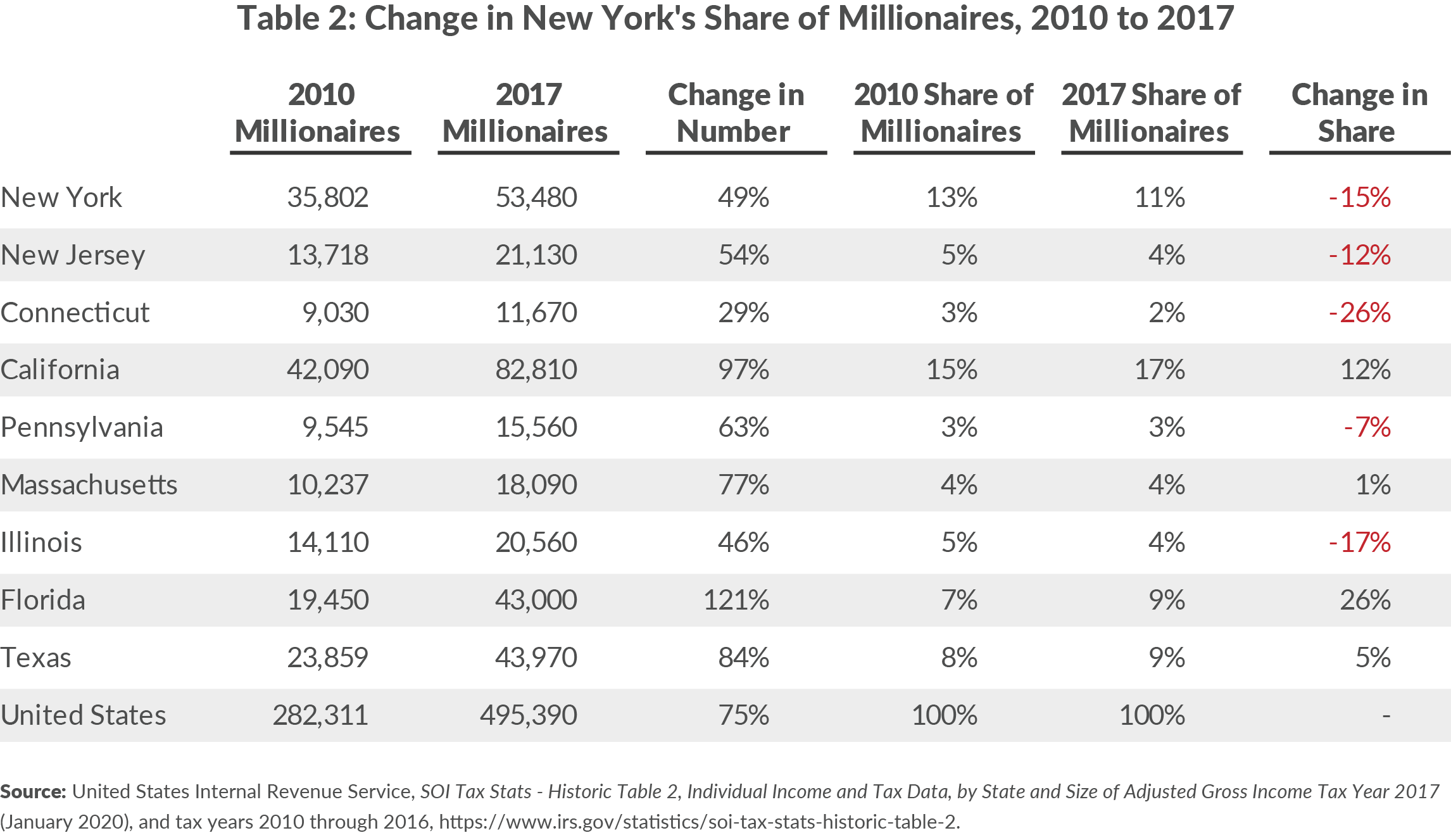 There were even greater shifts in the share of capital gains earned by New York’s millionaires, which have important revenue impacts for states’ coffers. Ordinary income is taxed where it is earned; however, capital gains are taxed by the state of residency (except for gains on sales of real property). For example, if a New Jersey resident works in New York, he or she pays New York taxes on wages earned in New York, but if the person earns capital gains, that income is taxed only by New Jersey.7 Individuals who derive most of their incomes from capital gains have a strong incentive to establish residency in a low tax state. 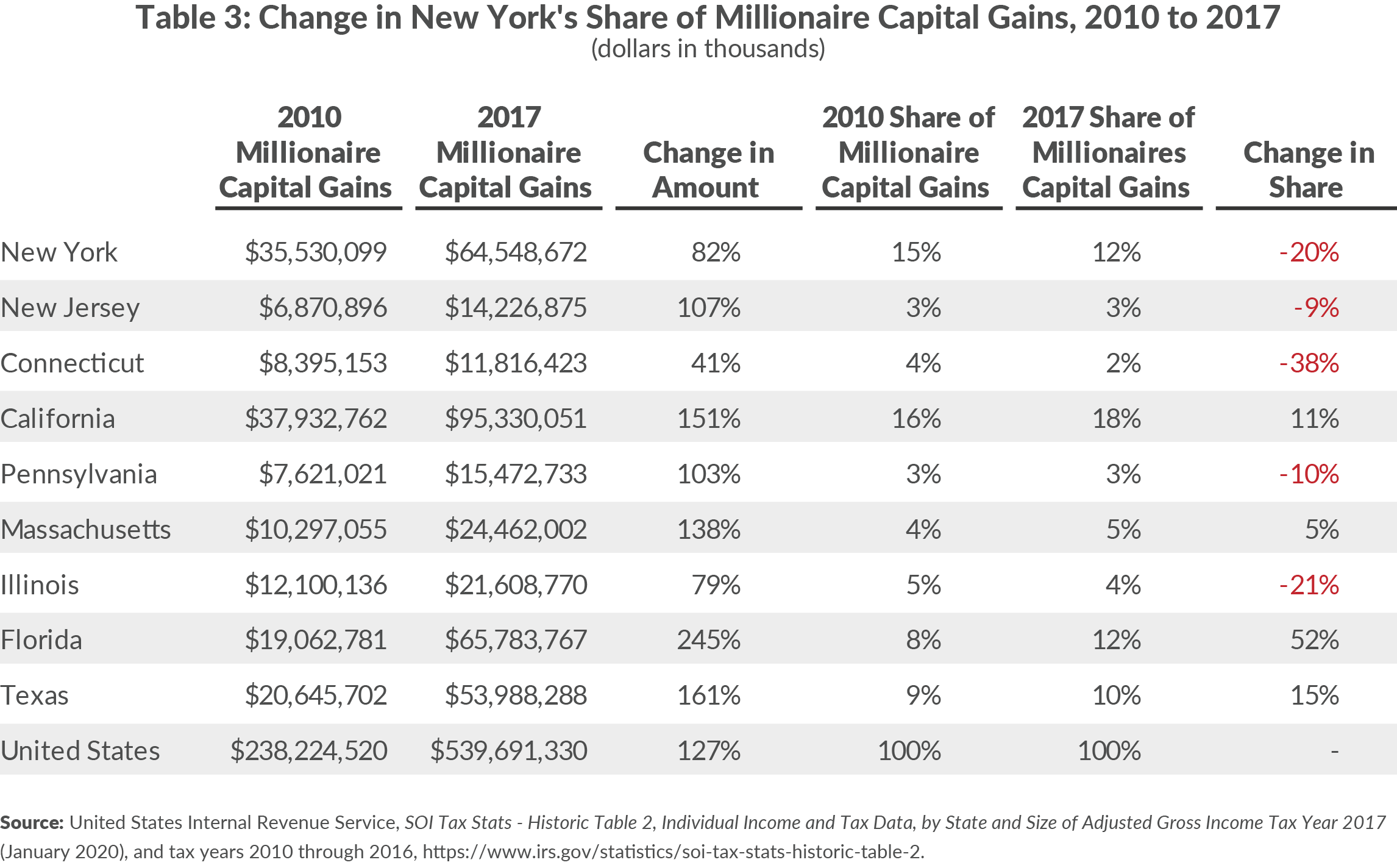