On June 14, 2018 the New York City Council adopted the Fiscal Year 2019 Budget. Given strong economic growth and some higher than expected tax revenue generated by federal tax reform, the ample resources allowed Mayor Bill de Blasio and the Council to come to a deal quickly. The budget features a 7.4 percent increase in City-funded operating spending and a $65 billion four-year capital plan. This blog outlines four weaknesses in the budget.

1: Growth in Spending is Accelerating 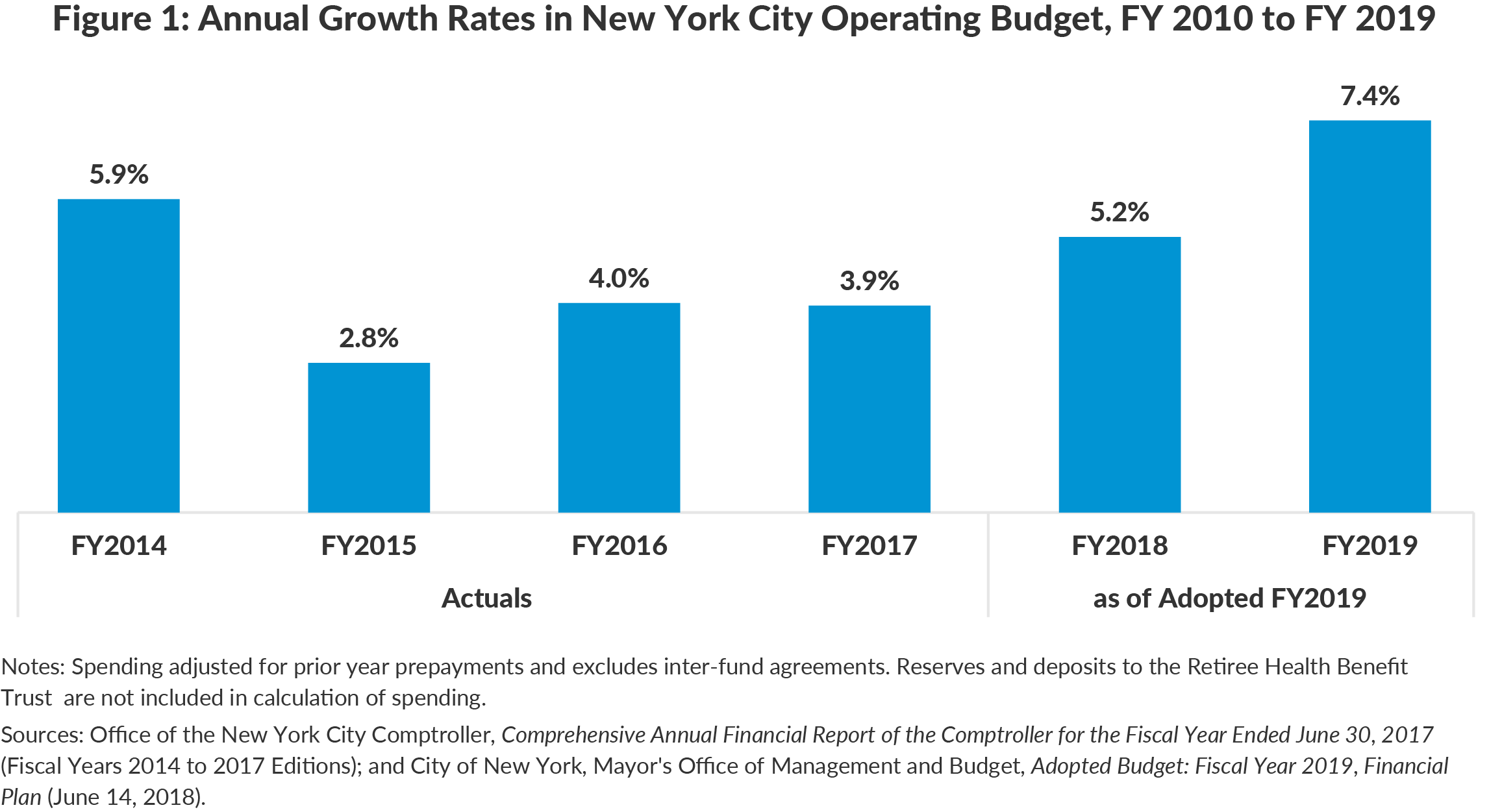 Approximately $1.7 billion in “new needs” have been added to fiscal year 2019 since June 2017.2 This includes funding for homeless shelters that were more costly to operate than expected, increases to school budgets through Fair Student Funding, subsidized MetroCards for low-income individuals and veterans, and additional slots for summer youth employment. While State education aid increased 3.3 percent in fiscal year 2019, the funding was $136 million less than the City’s financial plan projected, and the City decided to fund the difference.3 An additional $388 million was added in the Adopted Budget for Council initiatives, such as funding for child care, arts, adult literacy, and alternatives to incarceration.4

2: Spending Is Not Adequately Balanced With Saving

Minor additions were made to the City’s reserves. Following calls from the City Council to add $500 million, the fiscal year 2019 General Reserve was increased by $125 million to reach $1.125 billion.  Nothing was added to the Capital Stabilization Reserve, which remained at $250 million.

In addition, a $100 million deposit was made into the Retiree Health Benefit Trust (RHBT), which is intended to offset part of the City’s $93 billion liability for providing health insurance to its retirees. Since taking office the de Blasio Administration has made annual deposits into the RHBT, bringing its total balance to $4.35 billion.5

The City’s budgetary reserves (the General and Capital Stabilization Reserves) are just 2 percent of projected City-funded spending in 2019 and the RHBT balance is less than 5 percent of the long-term liability it is meant to fund. As the figure below shows, the additions to the General Reserve and the RHBT are about one-tenth of the new spending for fiscal year 2019.

The City’s capital plan continues to grow significantly and exceeds reasonable expectations that it can be implemented in a timely and cost-effective manner. Capital spending for fiscal years 2019 to 2022 was projected at $65.1 billion in the Executive Capital Commitment Plan, up from $34.7 billion in the Fiscal Year 2015 Executive Financial Plan, an increase of 87.5 percent.6  Debt service is budgeted at $7.0 billion in fiscal year 2019, representing 11.6 percent of tax revenue.  To support the capital plan, it will grow to $8.6 billion and 12.9 percent of tax revenue by fiscal year 2022.7

Nearly $1 billion in capital spending for fiscal years 2019 to 2022 will be added under the terms of the federal consent decree for the New York City Housing Authority (NYCHA).8 Mayor de Blasio and the Council further increased capital spending by more than $600 million in the Adopted Budget for a range of initiatives, including cultural institutions, libraries, school accessibility, and 3-K seats.9

While the City has made efforts to strengthen the public authorities that provide critical service to New York City residents, there remain substantial fiscal risks, and the City may need to provide additional resources.

NYCHA’s developments are rapidly deteriorating and the capital needs far exceed the available resources. Under the consent decree, the City will provide $250 million in capital funding in fiscal year 2019, in addition to more than $650 million in operating and capital support already scheduled.10  However, this falls far short of agency needs, now estimated to be at least $25 billion.11

The City’s subsidy to New York City Health + Hospitals (H+H) will be $1.8 billion in fiscal year 2019. While the agency has developed a turnaround plan under its new President, Dr. Mitchell Katz, it is likely that H+H will continue to rely on a high level of operating support from the City in the near future.12

Recommendations and Strategies to Slow Growth

New York City’s Adopted Budget contains rapidly increasing operating and capital expenditures. While out-year operating spending is projected to slow in fiscal years 2020 to 2022, the upcoming labor negotiations with the municipal unions pose a substantial risk to the City’s financial plan that necessitates implementing other strategies to further slow spending.

In negotiating new collective bargaining agreements, the City should hold firm on the following two items: raises in excess of the 1 percent per year the City has set aside must be funded through concessions or productivity increases and substantial health care savings must be secured. Focusing on retiree health insurance benefits can help the City reduce its other postemployment benefits (OPEB) liability, and the City should develop a policy to increase the size of the RHBT to fund this liability.

The City must also halt the growth of the workforce, which has already grown by more than 33,000 positions and is projected to expand by an additional 7,000 employees.13  Additionally, agencies should be required to find recurring efficiency savings equal to 1 percent of their City-funded spending and to fund new initiatives with commensurate savings in other program areas.14

The Capital Plan should be reduced and refocused on strategic priorities that emphasize state of good repair and maximize the return on investment for new projects. In addition using current resources as “pay-go capital,” instead of borrowing, would allow the City to invest in its infrastructure without increasing long-term liabilities.15

The initial steps taken to address the fiscal condition of the public authorities have been positive but still rely on significant contributions from the City’s budget. To be effective, the City may need to rethink its approach and relationship to NYCHA and H+H.