After tense negotiations and a close vote ending early morning July 1, the City adopted an $88.2 billion budget for fiscal year 2021. The quick and severe economic disruption opened up large budget gaps in fiscal years 2020 and 2021, over half of which closed with reserves and federal aid. The approach was centered on achieving short-term budget balance amidst quickly evolving circumstances; however, long-term challenges and significant uncertainty—with the risk almost all on the downside—remain.

The Coronavirus Pandemic and Recession Opened up Large Budget Gaps

In January 2020 Mayor Bill de Blasio presented a preliminary budget and financial plan that was balanced in fiscal years 2020 and 2021 and had modest gaps of $2.4 billion, $2.7 billion, and $2.7 billion in fiscal years 2022 to 2024, respectively. Between January and June 2020 the pandemic-triggered recession depressed tax and non-tax revenue for both the State and the City. In response, State leaders adopted a budget that reduced aid to New York City and other localities. The tax revenue shortfall and decrease in state aid opened a $10.4 billion budget gap in fiscal years 2020 and 2021, and increased annual budget gaps to at least $6 billion annually starting in fiscal year 2022. (See Table 1.) 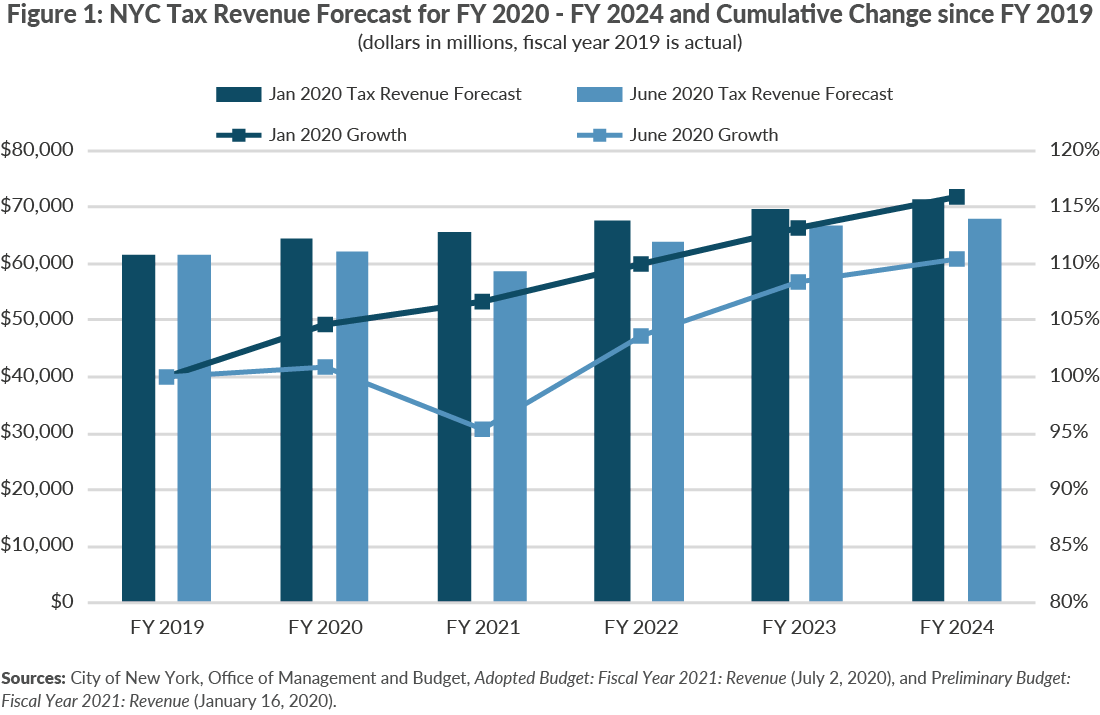 The City annually collects about $5 billion in revenues from fees, fines, permits, licenses, and other non-tax sources. The Adopted Budget’s non-tax revenue forecast net reduction was $300 million annually on average.2

The Executive and Adopted Budgets closed the gaps in fiscal years 2020 and 2021 and narrowed the outyear gaps by reducing planned expenditures, drawing down reserves, and relying on federal aid. (See Table 2.) Less than half of the fiscal year 2020 and 2021 gaps were closed by expenditure reductions (44 percent), with reserves used to close 38 percent and federal aid the remaining 18 percent. (See Figure 2.) Use of reserves during the pandemic and recession are appropriate; however, as reserves are non-recurring, the City will need to find other expenditure reductions or resources to fill outyear gaps. 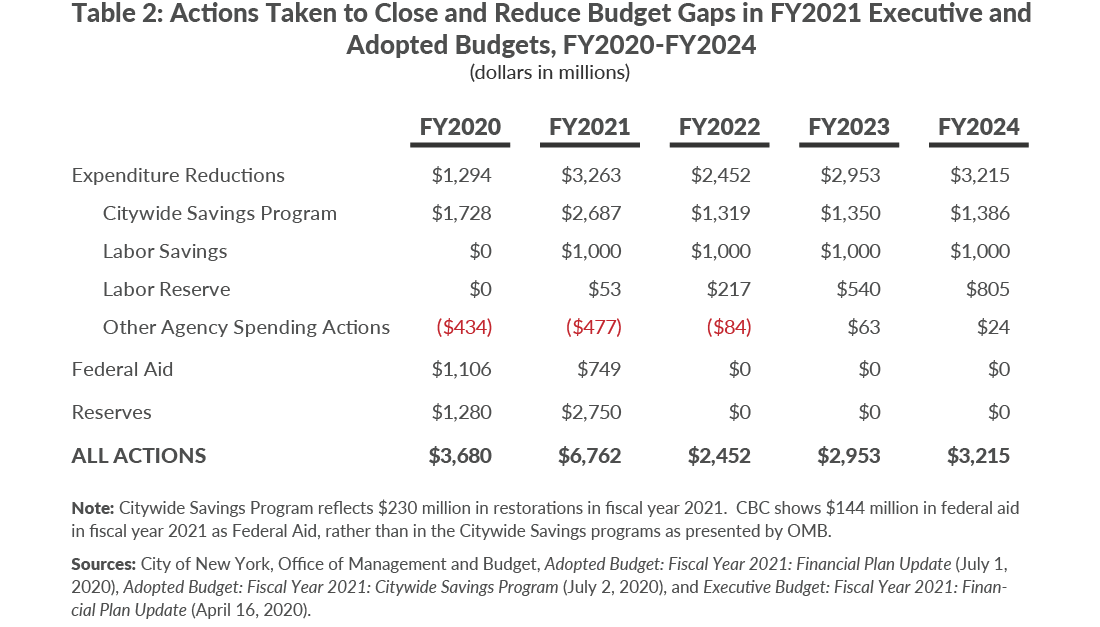 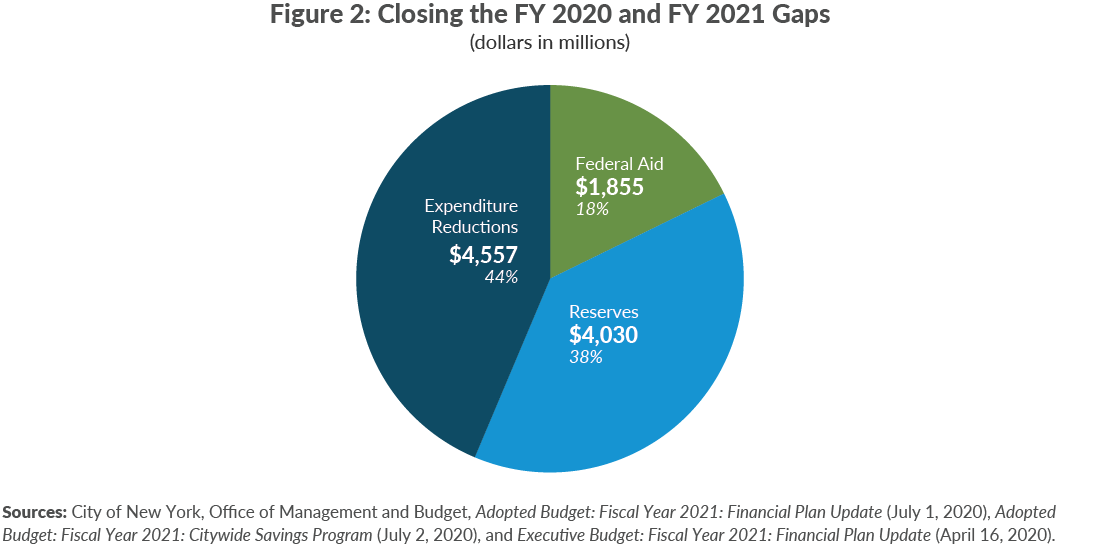 Planned expenditures were reduced by $1.3 billion, $3.3 billion, $2.5 billion, $2.9 billion, and $3.2 billion, in fiscal years 2020 to 2024, respectively. These reductions are the combination of savings programs, expected labor savings, reduction of the labor reserve, and other agency spending actions, including City Council discretionary funds. (See Figure 3.) Importantly, some reductions lack specificity or are unlikely to be realized. 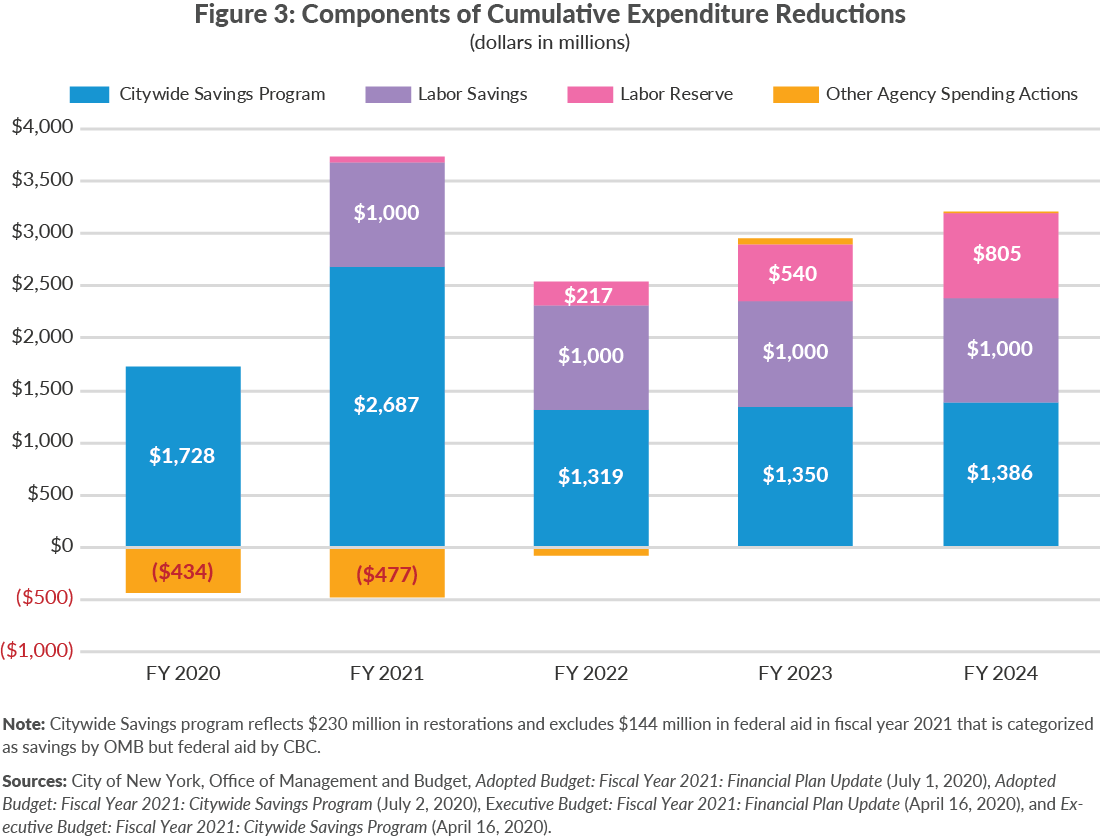 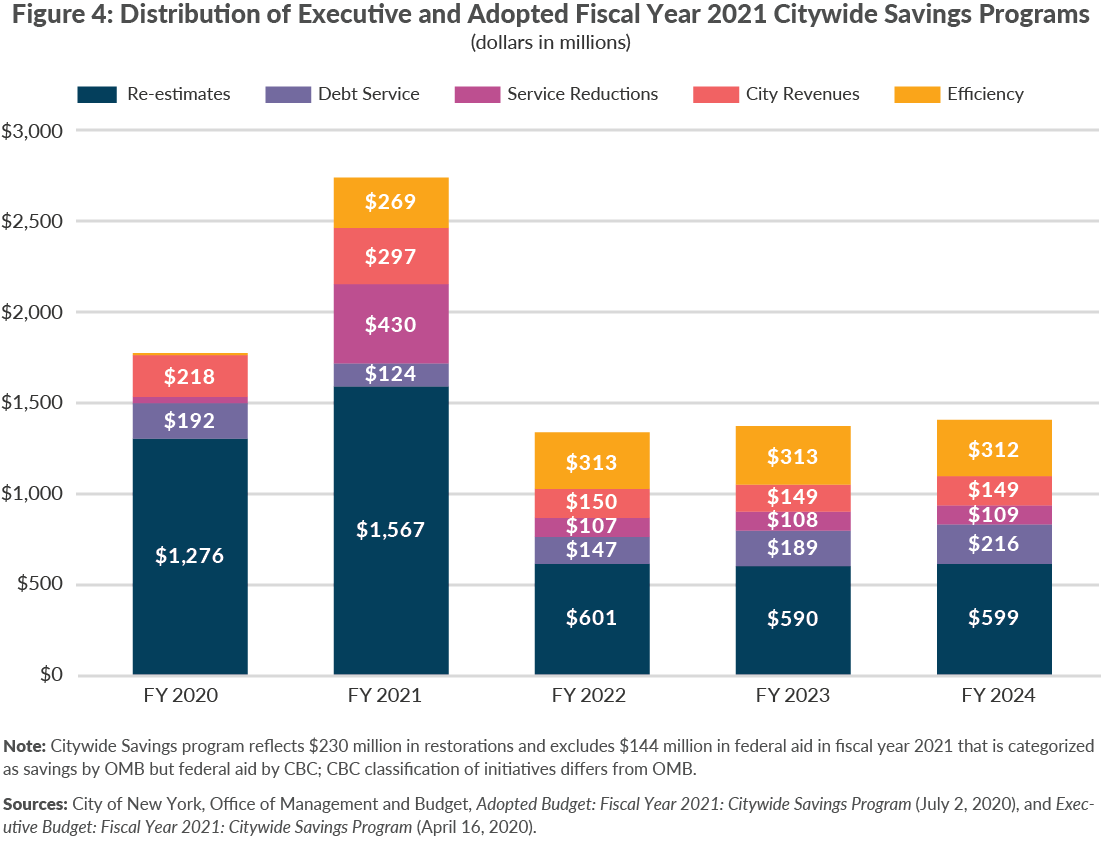 About half of the fiscal year 2021 savings do not recur because they are heavily reliant on one-time spending re-estimates, funding shifts, or underspending as a result of the pandemic. (Figure 4.) In addition, service reductions were mostly one-year suspensions due to the pandemic, and save $430 million in fiscal year 2021, and slightly less than $110 million annually thereafter.

Eleven percent of CSP savings are from new City revenue, including water and sewer rental payments, increased reimbursement for ambulance transports, and a parking rate increase in the outer boroughs. Savings from refunding debt and lower-than-expected interest rates generate about 10 percent of savings.

Less than one-fifth of the cumulative savings is due to increasing operating efficiency—revamping the provision of services to reduce costs without reducing the level of service. Efficiency initiatives only provide about $270 million of the savings in fiscal year 2021 and about $310 million per year in fiscal years 2022 to 2024—just 0.39 percent of the fiscal year 2021 adjusted City-funded budget.5 In fiscal years 2022 to 2024, this figure is between 0.42 percent and 0.44 percent of City-funded spending.

The budget includes $1 billion in recurring savings to be negotiated with the City’s municipal labor unions. Labor has provided savings in prior recessions, but no plan was in place at the time of budget adoption. The Mayor has said that absent an agreement yielding $1 billion in savings, the City would lay off 22,000 workers beginning in October.

The City set aside funds for future collective bargaining agreements in a “labor reserve” sufficient to extend the current pattern of wage increases to unsettled contracts and to provide 1 percent annual raises in the next “round” of bargaining.6 In the Adopted Budget labor reserve funding for two 1 percent raises was eliminated, essentially amounting to a two-year wage freeze with savings that increase from $53 million in fiscal year 2021 to $805 million in fiscal year 2024.7

Federal aid totaling $1.9 billion was used to close the gaps in fiscal year 2020 ($1.1 billion) and fiscal year 2021 ($750 million, including $144 million for the Emergency Shelter Grant and Staten Island Ferry operations included in the CSP). 11 This funding was primarily through the enhanced Federal Medical Assistance Percentage (FMAP) and the U.S. Coronavirus Aid, Relief, and Economic Security (CARES) Act, as well as through Federal Emergency Management Agency (FEMA), which provided $172 million in disaster funds for overtime costs that were originally City-funded.12 In addition to the $1.9 billion, the City expects to receive $2.5 billion in FEMA aid as reimbursement for pandemic responses costs.13

The remaining $2.6 billion came from a drawdown of the RHBT, which reduced the RHBT balance from $4.7 billion to $2.1 billion in fiscal year 2021.15 This fund was created in 2006 to accumulate resources to fund the health benefits of retired city employees; the City’s liability for these retiree benefits, commonly known as other postemployment benefits (OPEB), is $105 billion.16

The actions used to balance the fiscal year 2021 budget provided short-term solutions and did not make sufficient progress in paving a path to stabilize the City’s finances over the mid-term and long-run. The balanced budget is vulnerable, with substantial downside risk, including possible State cuts to local assistance and tax revenue collections that depend on a recovery starting in calendar year 2021, which recent economic data and the evolving path to controlling the pandemic call into question.

The CSP mirrors prior de Blasio Administration efforts—significant reliance on re-estimates and funding shifts, with minimal recurring savings from efforts to improve efficiency. And this year, the CSP included some proposed savings that will be hard to achieve. For example, the City is expecting to reduce New York Police Department overtime by $336 million (56 percent) and Department of Correction overtime by $67 million (44 percent) in fiscal year 2021 without detailed operational plans. Prior efforts to control uniformed overtime have had limited success. In addition the Fire Department expects to collect $96 million more in ambulance fees in fiscal year 2021 and $128 more annually in fiscal years 2022 to 2024 through “strategies to increase reimbursement.”17 This would represent a 42 percent increase in fiscal year 2021 and a 56 percent increase in fiscal years 2022 to 2024. In fiscal year 2019 ambulance fee revenue was $179 million, a shortfall against the budgeted amount of $205 million.18

Labor Savings Are Reasonable and Need to Be Identified Promptly

Labor savings should be a part of the City’s budget balancing efforts. The $1 billion savings target is a reasonable 2 percent of total municipal workforce expenditures; however, to date no plans or process to achieve this target have been initiated, even with an October deadline that the Mayor has said must be met to forestall 22,000 layoffs of municipal workers.19

CBC has identified approaches to generate these savings and stave off layoffs. A package that consolidates union welfare funds, phases in employee health insurance premium contributions, changes work rules to improve productivity, and shrinks the workforce through attrition could generate savings of these magnitude. Furthermore, the City and labor could identify savings by agreeing to change other collectively bargained benefits, including vacation days, sick leave, work hours, and even contractually agreed upon raises and steps.

Shrinking the workforce through attrition is both possible and preferable to layoffs. Approximately 6 percent to 7 percent of City employees—over 20,000 individuals—leave City employment each year.20 If the City filled only a portion of those positions, broadening the existing partial hiring freeze, savings would be substantial. While attrition is less targeted than layoffs, refilling positions strategically can allow the City to focus on maintaining critical services. Prior recessions have relied substantially on attrition with more targeted layoffs aimed at improving programmatic operation.

Adopted budget actions partially offset future revenue shortfalls; however, the gap for fiscal year 2022 is now $1.7 billion larger than it was in January. The efforts taken in this budget were insufficient and substantial downside risks remain.

The State’s fiscal health is as bad or even worse than the City’s; New York State faced a $7 billion budget gap before the pandemic hit and its enacted budget gap closing plans include $8 billion in unspecified local cuts in the absence of federal aid.21 These cuts would be in addition to the impact on State education aid the City’s Adopted Budget already included in fiscal years 2022 to 2024—about $1 billion annually.22 Possible reductions in State aid are a substantial risk for the City, which receives about 40 percent of State education aid.

Lastly, there are risks to the City from managing spending. In addition to optimistic assumptions, like a 56 percent reduction in police overtime, the City frequently underestimates future spending needs. For example, fiscal years 2022 and out do not currently include funding for either the Fair Fares program or the additional MTA paratransit contribution.23 And, while a wage freeze is reasonable in this economic situation, budgeting for them at the end of an administration without the agreement of labor presents a huge challenge for the next Mayor.

The City budget for fiscal year 2021 is balanced, but that balance is based on actions yet to be taken and assumptions that may prove too optimistic, both in terms of revenue to be received and savings to be achieved. Similarly, the outyear budget gaps may be larger than currently forecast, especially if State aid cuts are enacted or the economic recovery is slower than currently forecast. The City should undertake a thorough review of agency programs and operations to identify recurring savings, reduce the City’s workforce through attrition, and implement recurring labor savings.

The Administration continues to lobby for additional federal aid and long-term borrowing authority in an effort to close budget gaps, rather than pursue an aggressive strategy to identify additional recurring spending reductions. While additional federal aid would be appropriate and in line with support given to localities in prior recessions, the City should not turn to long-term borrowing to address an imbalance in revenues and expenditures; borrowing should be a last resort.