NYCHA’s Physical Conditions Remain the Worst in the City

Insights from the 2017 Housing and Vacancy Survey

Every three years, the U.S. Census Bureau conducts a New York City Housing and Vacancy Survey (HVS), which provides the most comprehensive information available on the size, nature, and condition of New York City’s housing stock. The data from the 2017 HVS, which were released earlier this month, will be carefully and thoroughly analyzed by housing policy makers and advocates. But one result that is readily apparent is the continued poor quality of physical conditions in New York City Housing Authority (NYCHA) apartments despite an overall improvement in the quality of the City’s housing stock. The condition of NYCHA’s public housing units remains significantly worse on average than that of comparable privately owned rental units.

The most significant change from 2014 was the increase in reported heating breakdowns, which grew from 24 percent to 28 percent. The most commonly reported deficiency was broken plaster or peeling paint, reported by 41 percent of respondents. Reports of water leaks grew from 28 percent to 30 percent while reports of cracks in ceilings and walls decreased from 31 percent to 29 percent.[2]

Over the same period, the rest of the city’s rental housing stock saw modest improvements in every category, as shown in Figure 2. The most commonly reported issue, water leaks, decreased from 18 percent of respondents in 2014 to 14 percent in 2017.

The physical condition of NYCHA units was also significantly worse than other types of rental housing. As Figure 3 shows, approximately 30 percent of NYCHA households reported heating breakdowns, water leaks, or cracked ceilings or walls, and 40 percent reported broken plaster or peeling paint, compared to 15 and 20 percent of rent-stabilized tenants in buildings built before 1947 and less than 10 percent of residents in unregulated, private rental housing. Approximately 9 percent of NYCHA residents also reported holes in floors–comparable to the rates reported by rent controlled and stabilized tenants, but much higher than residents in unregulated units. 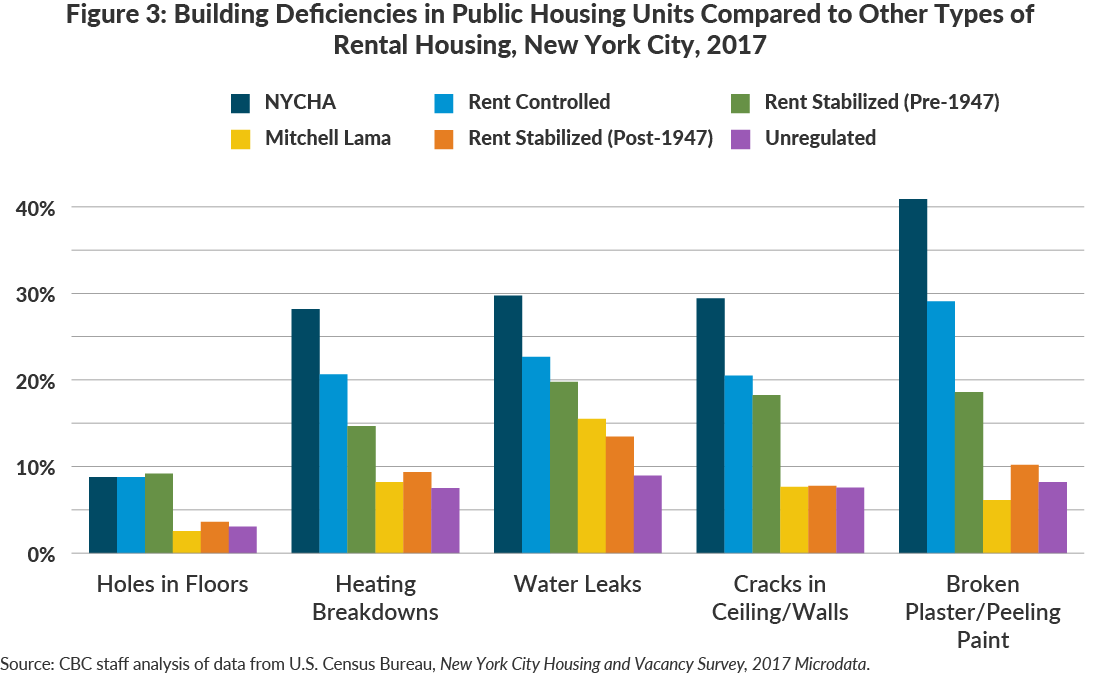 The growing gap in building quality between NYCHA and other rental housing units should deepen the urgency of efforts to improve conditions at NYCHA.

In July NYCHA released the findings of its latest Physical Needs Assessment. The report found that the cost of bringing the city’s public housing units to a state of good repair is nearly $32 billion over the next five years. Every development in the NYCHA system requires at least one type of major capital improvement, with needs ranging from roof and window replacement, to replacing kitchens and bathrooms, to upgrading heating plants. While waiting for these repairs, many NYCHA residents are forced to live with some of the worst building conditions in the city.

Without decisive action, these units will continue to deteriorate; many will soon reach the point at which it is no longer cost-effective to repair them. Citizens Budget Commission’s recent report on NYCHA’s capital needs identified a range of strategies through which NYCHA and the City can start addressing these issues. Read more  to find out about the root causes of this crisis and what the City can do to fix it.