NYS Revenues in a Recession

New York State revenue weakness already looms over the fiscal year 2020 budget negotiations. Thirty days after Governor Andrew Cuomo released the Executive Budget he announced that current-year personal income tax collections would be $2.6 billion lower than projected.1 This shortfall may portend worse times to come. The impact from a potential recession could be substantial, totaling between $22 billion and $44 billion below projections over three years. The fiscal year 2022 budget gap could grow from $490 million to an astounding $15 billion. To mitigate the impact of a potential downturn, New York will have an estimated $2.5 billion in its rainy day fund at the end of fiscal year 2020, an amount that is inadequate to forestall cuts to local aid, harmful service reductions, and tax increases.2 Final agreement on the Adopted Budget for Fiscal Year 2020 should constrain spending growth and make additional deposits to rainy day funds.

The Economic Climate is Uncertain

There is a growing consensus that the nine-year economic expansion is slowing and the risk of a national recession is increasing.3 Since the Fiscal Year 2019 Executive Budget, the New York State Division of the Budget decreased forecasts for calendar year 2019 New York State personal income growth from 4.9 percent to 4.0 percent and for capital gains from 7.8 percent growth to a 5.2 percent decline–significant revisions that indicate a slowing economy.4 Out-year growth rates also were decreased.

This volatility affected the forecast for State tax collections. Between release of the Executive Budget on January 15 and the 30-day amendments released on February 15, the State decreased the personal income tax revenue forecast for fiscal year 2019 by $2.6 billion and decreased the fiscal year 2020 forecast by $1.2 billion. It is important to note these are reductions of forecasted growth; even after these changes, taxes are projected to grow from $73.6 billion to $90.9 billion from fiscal years 2019 to 2023, an average annual growth rate of 5.4 percent.

The Fiscal Risk is Significant

Applying these trends to a hypothetical recession beginning in fiscal year 2021 would result in three-year cumulative tax revenue shortfalls of $34.1 billion. (See Figure 1.) In the first year, State tax revenues would fall $5.3 billion below the financial plan, a year-over-year decline of about $3.0 billion. The tax revenue shortfall would be even more substantial in the second year, with revenues $14.3 billion below projections. Even with revenue growth resuming in the third year, the shortfall would still be $14.4 billion below current estimates. (See Figure 1.) 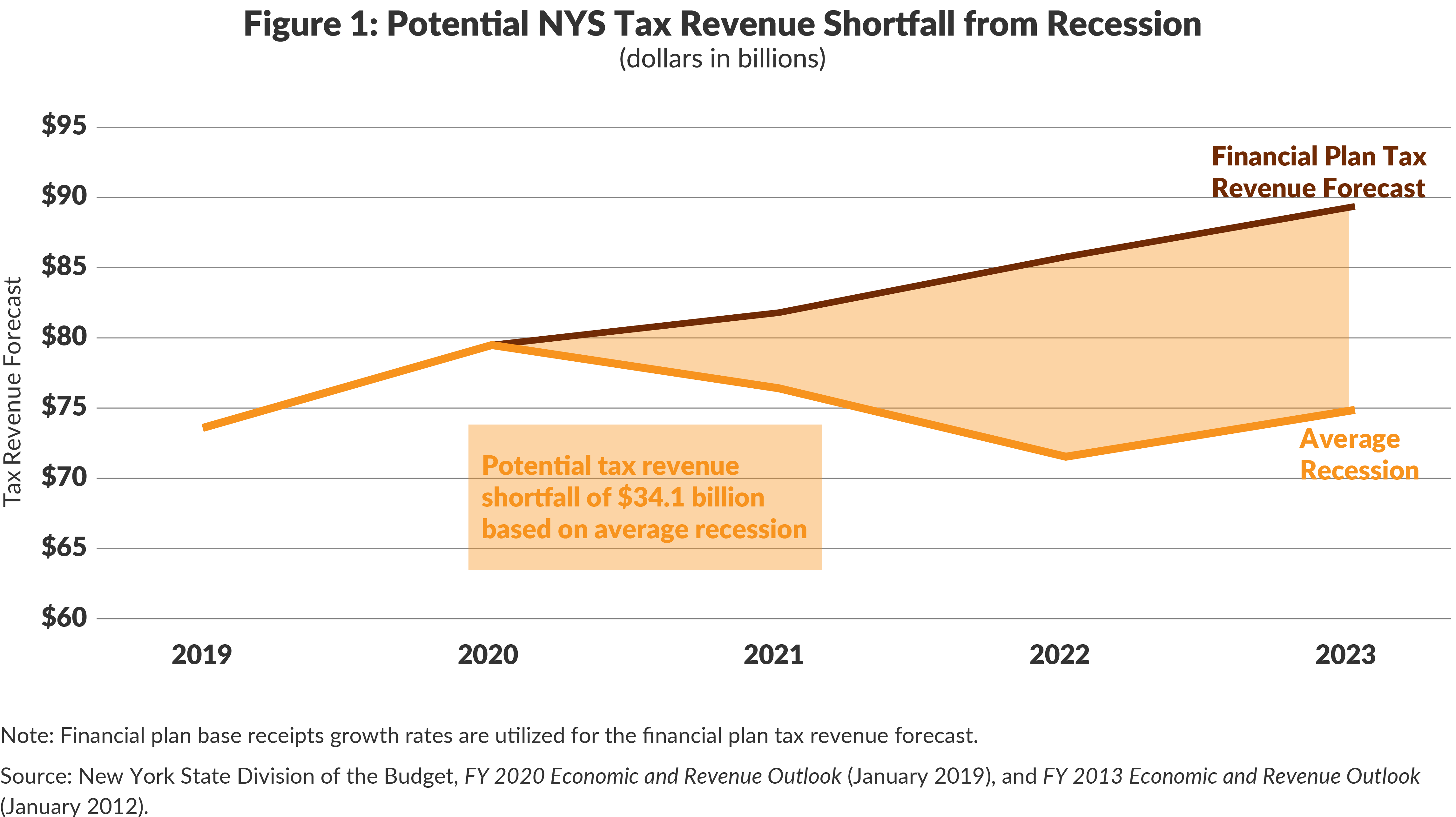 Such a dramatic effect on revenues would also widen future budget gaps. The Executive Budget projects budget gaps of $2.0 billion and $0.5 billion in fiscal years 2021 and 2022, turning to a surplus of $0.7 billion in fiscal year 2023. These gaps would be greater if not for projected savings from keeping state operating spending growth to 2 percent. Assuming the average scenario of the last three recessions, gaps would reach $7.4 billion, $14.8 billion, and $13.7 billion respectively. Cumulative gaps over three years would average $35.8 billion.

New York State has two rainy day reserves, the Tax Stabilization Reserve Fund (TSRF) and the Rainy Day Reserve Fund (RDRF). In each fiscal year, deposits up to 0.95 percent of general fund disbursements are allowed until the combined fund balance reaches 7 percent of general fund disbursements.10 The Executive Budget includes deposits of $250 million in fiscal year 2019 and $238 million in fiscal year 2020. The Budget Director subsequently indicated that the additional $190 million identified by the Comptroller as part of the revenue consensus process also will be deposited, bringing the total projected balance to $2.5 billion.11 This is only about half of the maximum amount allowed under law.12

When it comes to building reserves for a rainy day, New York should look west to sunny California. To learn why, read CBC's blog post California Dreaming.

The State’s fiscal cushion is insufficient to fill budget gaps in a recession. Assuming tax revenue declines similar to those experienced after the last three recessions these resources would cover less than 7 percent of budget gaps–the remainder, $33.4 billion, would need to be closed by other actions. (See Figure 3.) 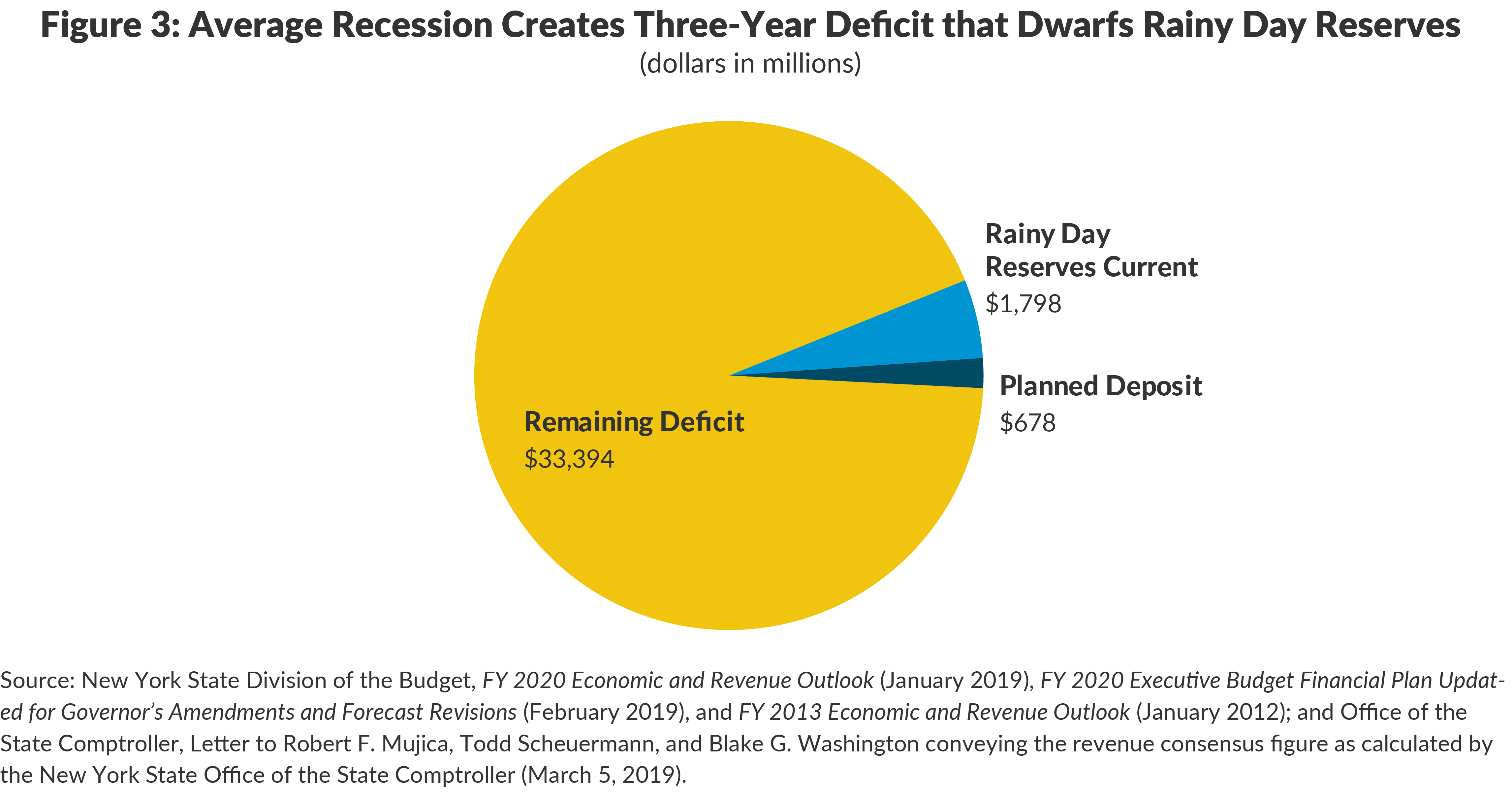 The State Should Better Prepare

The State has not taken advantage of the long recovery to plan for an inevitable economic downturn. It also missed the opportunity to save the $12 billion in one-time monetary settlements accumulated between 2014 and 2019.13 Actual State Operating Funds spending is projected to grow 3.4 percent; State leaders should reduce spending growth to at most 2 percent and increase reserves.14 Larger deposits  are required to forestall drastic service cuts, which would be made when New Yorker’s need services most, and to prevent counterproductive tax increases in the midst of a recession. Taking action now can minimize negative impacts on New Yorkers.