NYS Trends During the Cuomo Administration

Governor Andrew Cuomo assumed office on January 1, 2011 and has served two terms.  This policy brief reviews the major demographic, economic, and fiscal trends and describes notable policy changes during his tenure. Data is presented on a statewide basis, and where available, for New York State’s 10 regions. Growth rates are generally based on the year prior to Governor Cuomo taking office; this reflects calendar year 2010, state fiscal year 2011, school year 2010-2011, or federal fiscal year 2011, depending on the data being analyzed. Fiscal year 2019 spending estimates are from the First Quarter Update to the New York State Budget For Fiscal Year 2019. Where available and informative, the State’s performance is benchmarked against national trends or competitor states.

This report is separated into seven sections, which are summarized below:

Demographic and Economic Trends: Since 2010 New York’s population grew at a slower pace than the nation’s. New York City grew more quickly than the rest of the state. Economically, the New York City metropolitan area has prospered, while upstate has faltered. The state allocated more than $28 billion to economic development between fiscal year 2012 and fiscal year 2019.

Fiscal Trends: Governor Cuomo’s first term began when the State was still recovering from the Great Recession, and the state’s fiscal choices appropriately reflected the reality of a lagging economy. In Governor Cuomo’s second term spending growth accelerated, buoyed by increasing tax revenues and $11 billion in financial settlements. Early in Governor Cuomo’s tenure the State adopted reforms to State employee retirement and health insurance benefits and reduced the State workforce, resulting in substantial savings. The workforce has begun to grow again, but the savings from the employee benefit changes continue. Increasing tax revenues have supported increased spending. Some tax rates have been reduced and generally are competitive with other states.

Health: Medicaid spending in New York grew more slowly than in most other states, increasing by approximately 23 percent between fiscal years 2011 and 2019, while enrollment grew by similar rates. Slower growth rates were the result of the reforms adopted by the State’s Medicaid Redesign Taskforce combined with the impact of federal reforms. Despite slow growth, New York’s Medicaid program remains one of the most expensive in the nation as measured by aggregate or per enrollee costs. The State’s uninsured rate is well below national averages and decreased from 12 percent in 2010 to 5.7 percent in 2017.

Infrastructure: The State’s bridges are in worse condition than national averages, but have improved over the last eight years. Road surfaces have also improved, with 64 percent of state roads rated as excellent or good in 2016, compared to 60 percent in 2011. However, the performance of the Metropolitan Transportation Authority (MTA) has declined significantly.

Crime and Corrections: In New York and nationally, violent and nonviolent crime rates are down, and the prison population is also declining. At the same time the share of violent inmates in New York prisons and the ratio of corrections officers to inmates have increased.

Energy and Environment: New York’s energy sector is cleaner than the rest of the nation, and since 2010 New York has further decreased pollution, albeit at a slower pace than the nation. Residential electricity costs approximately 40 percent more per kilowatt hour than national averages, but rates declined in New York between 2010 and 2016 while they increased nationwide. 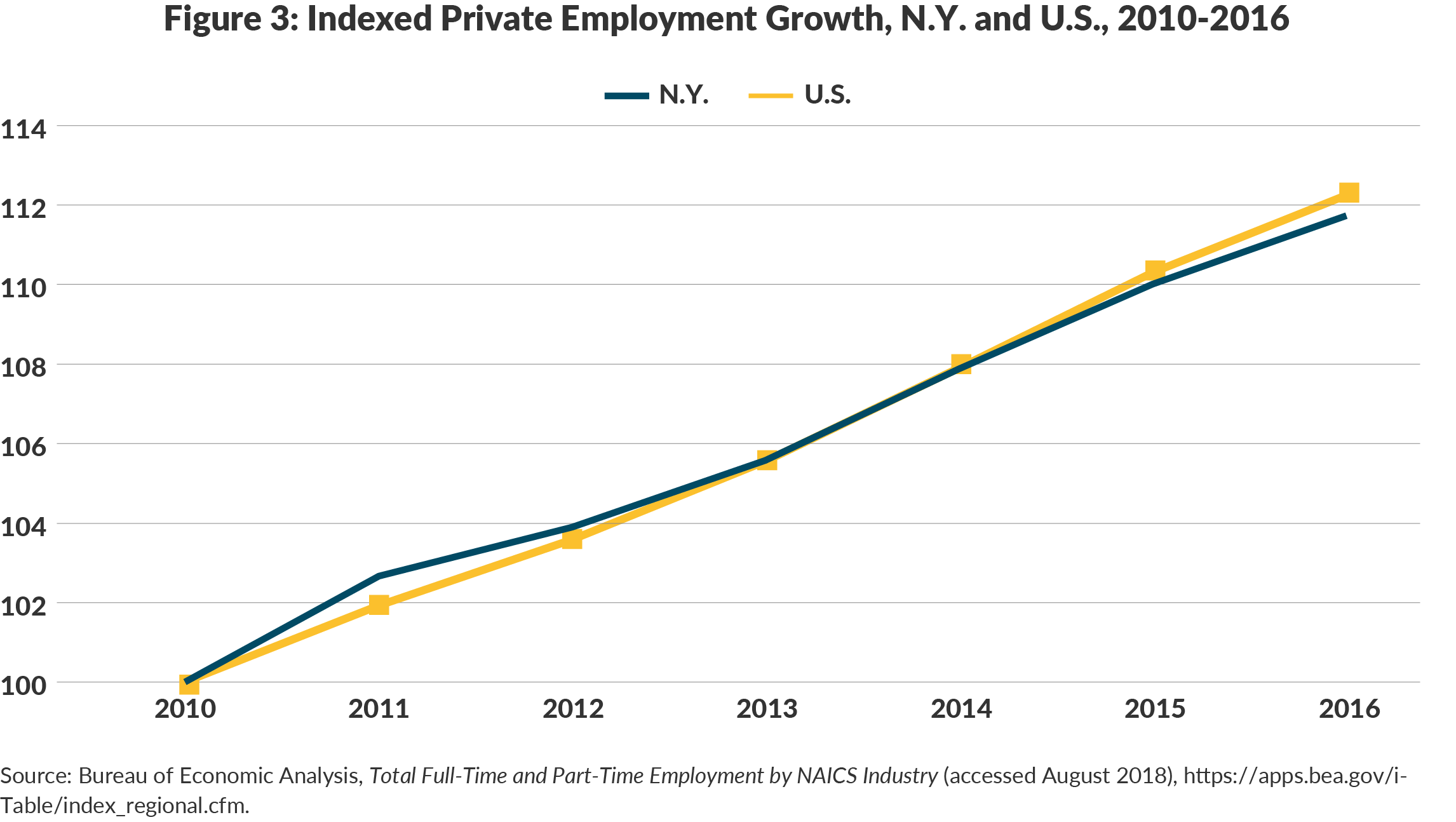 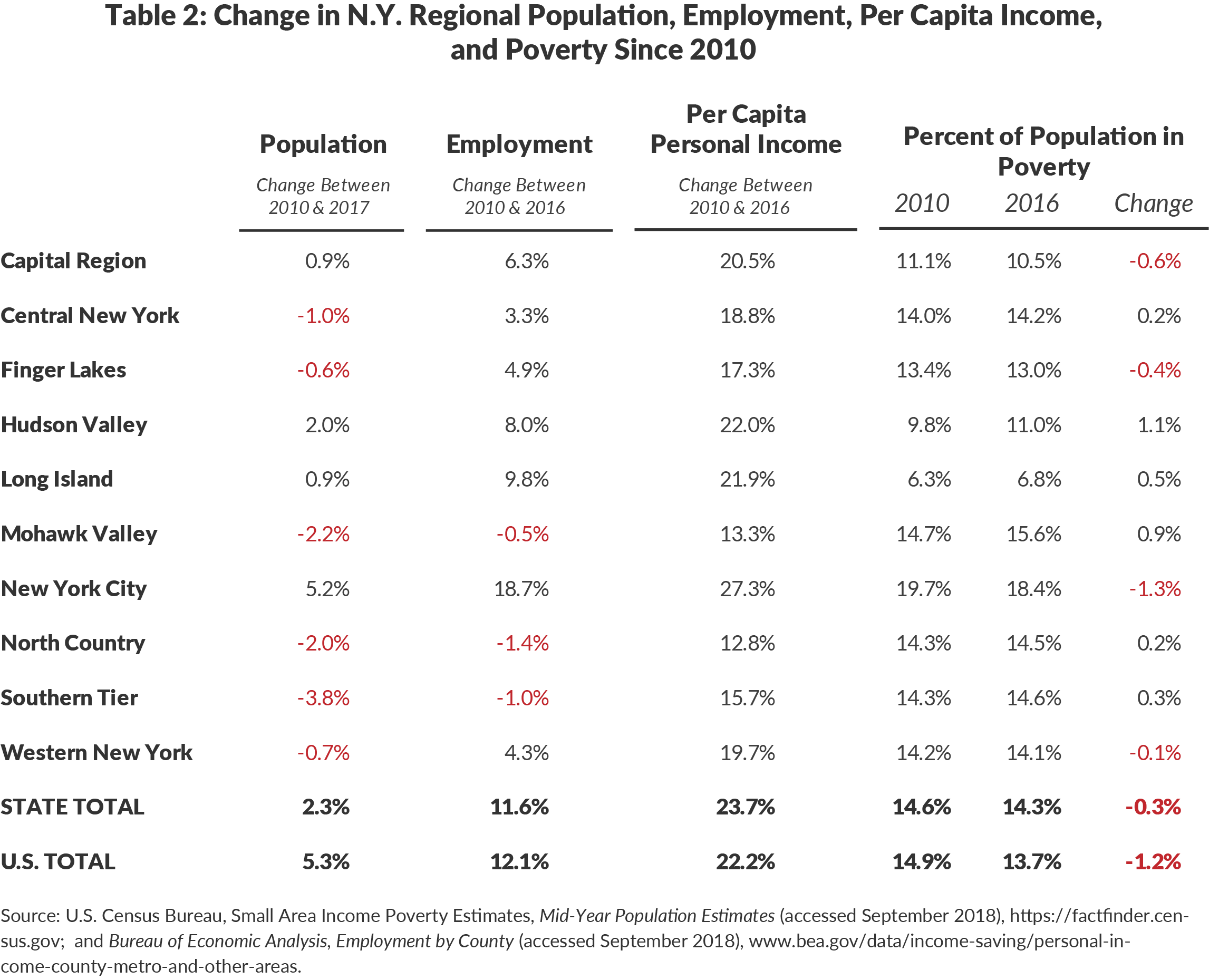 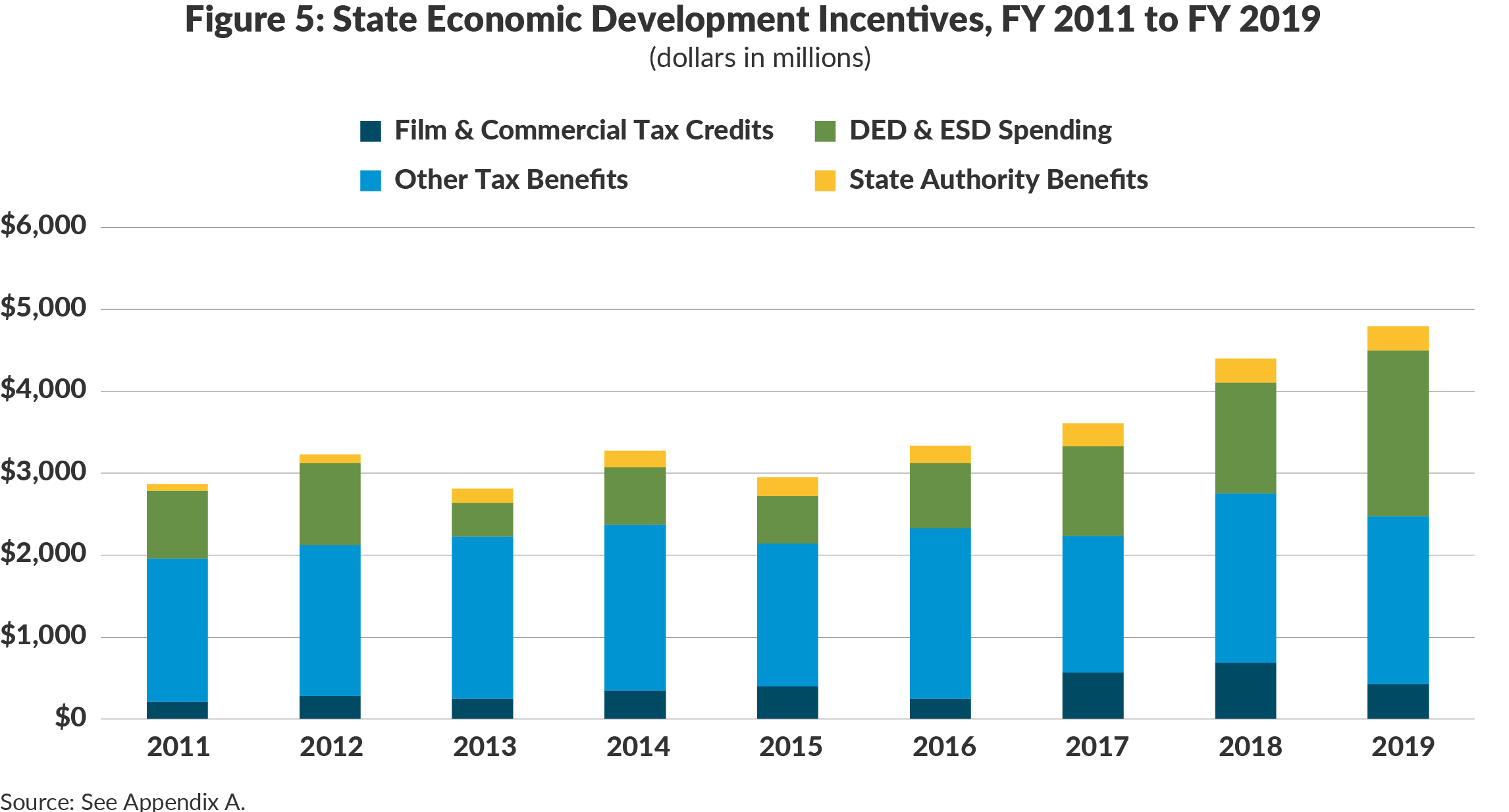 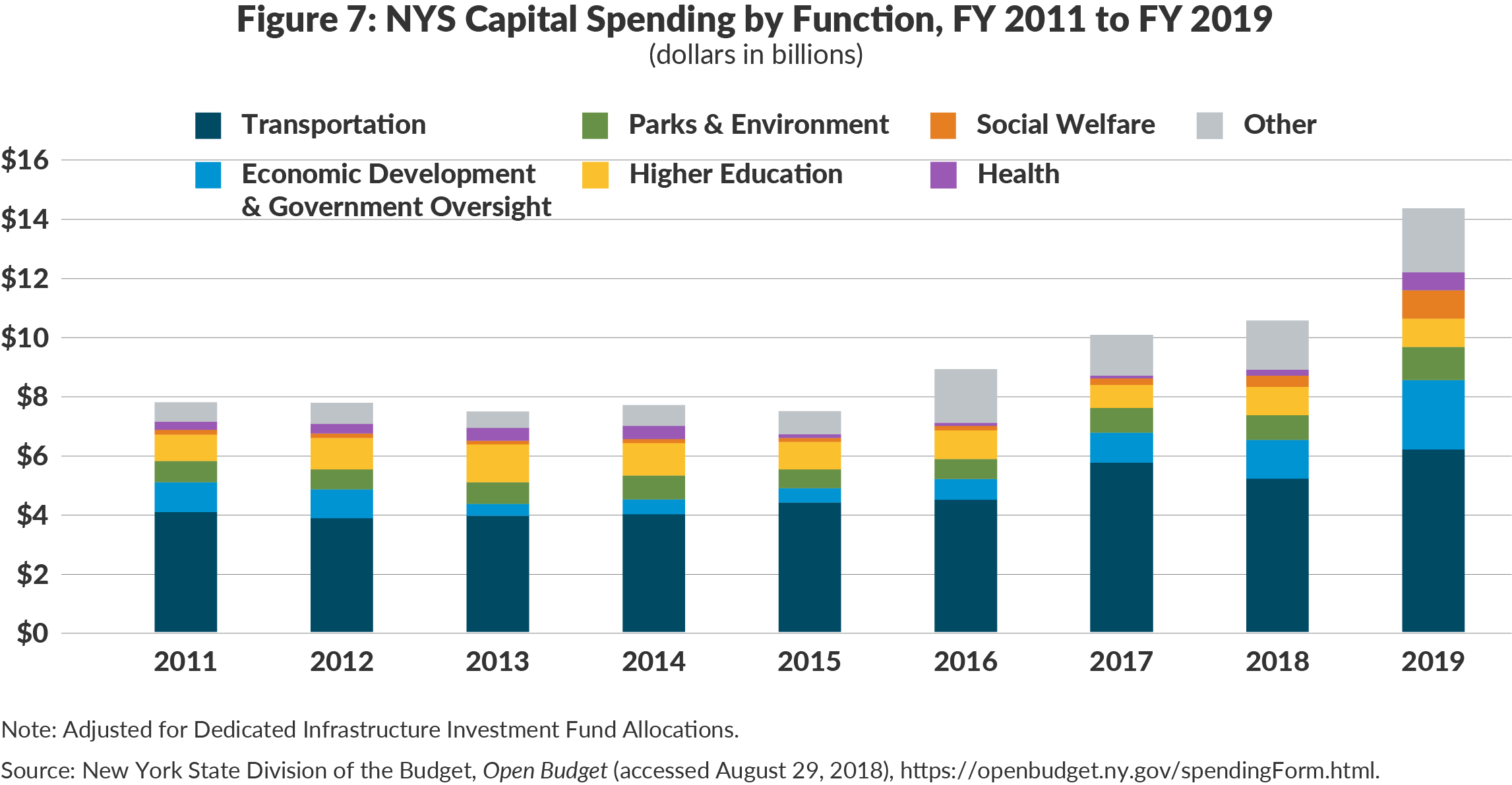 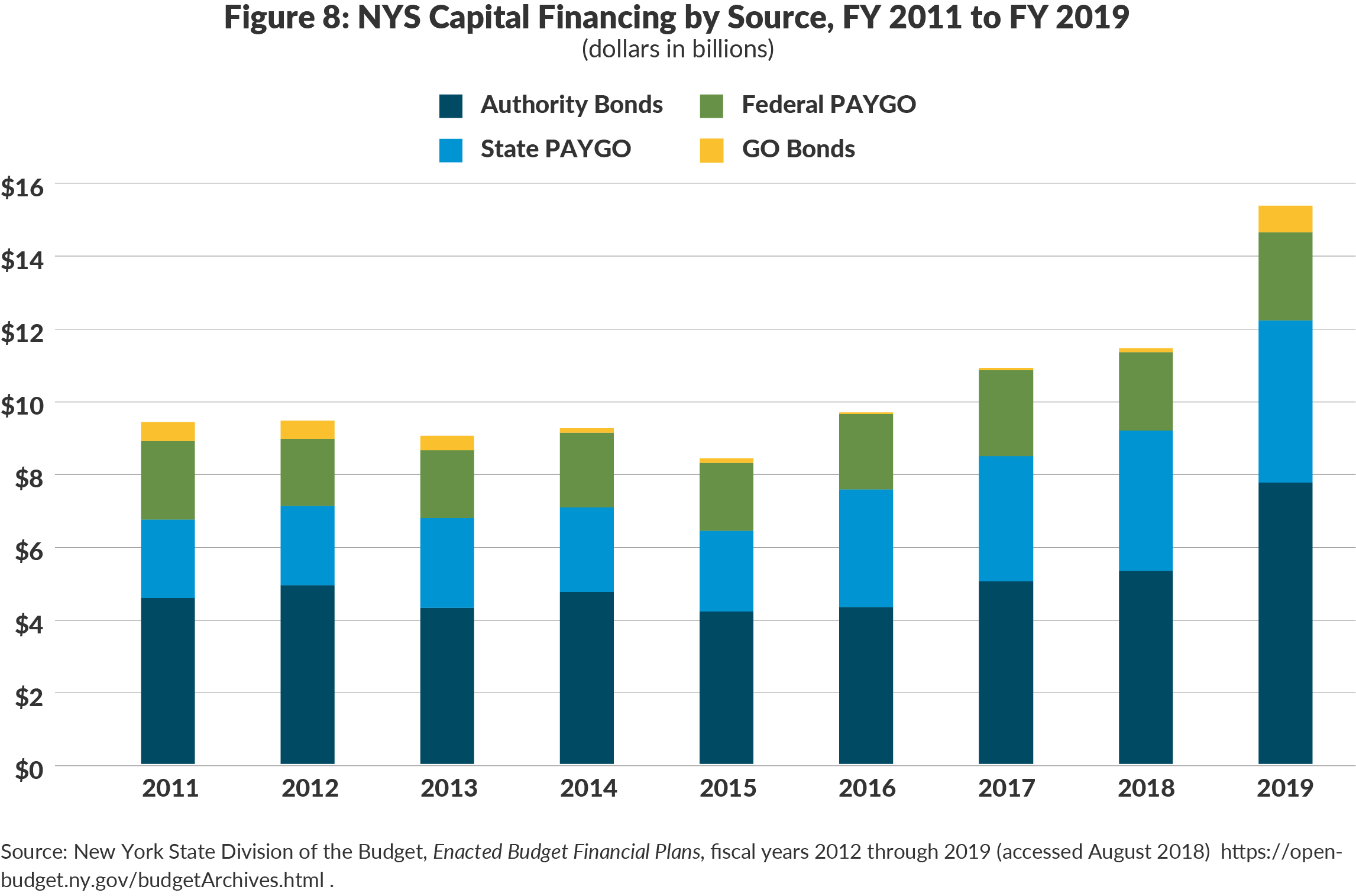 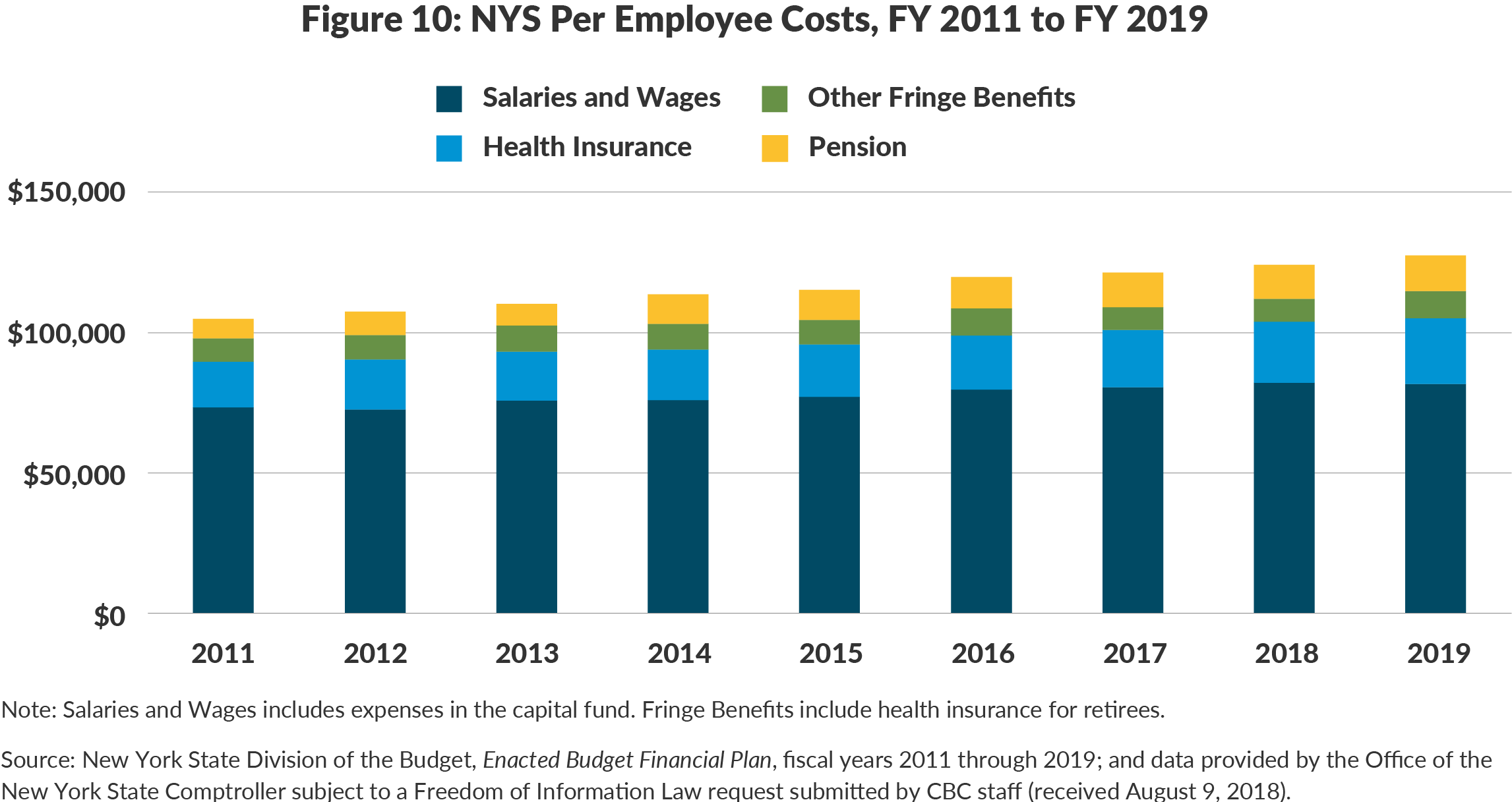 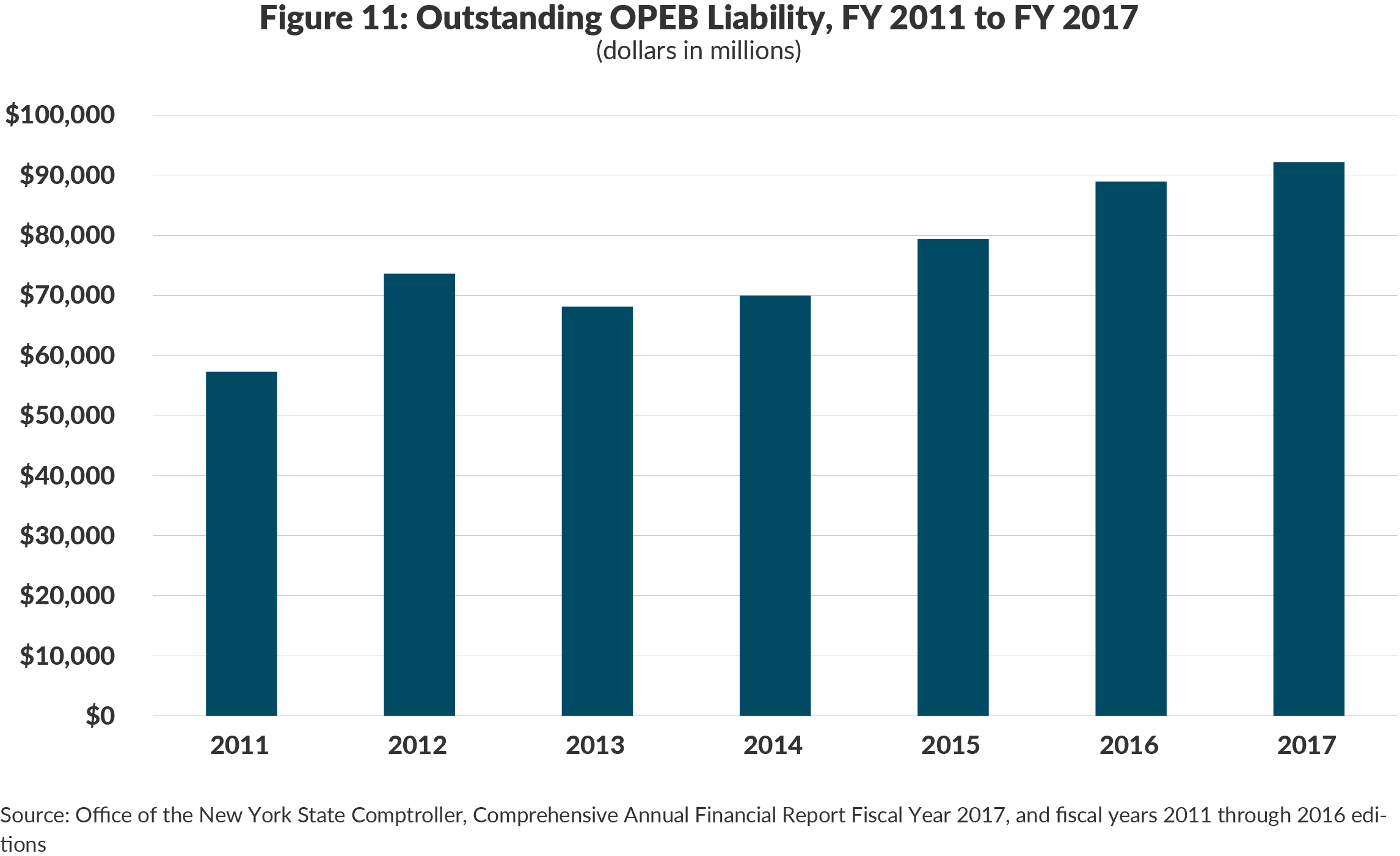 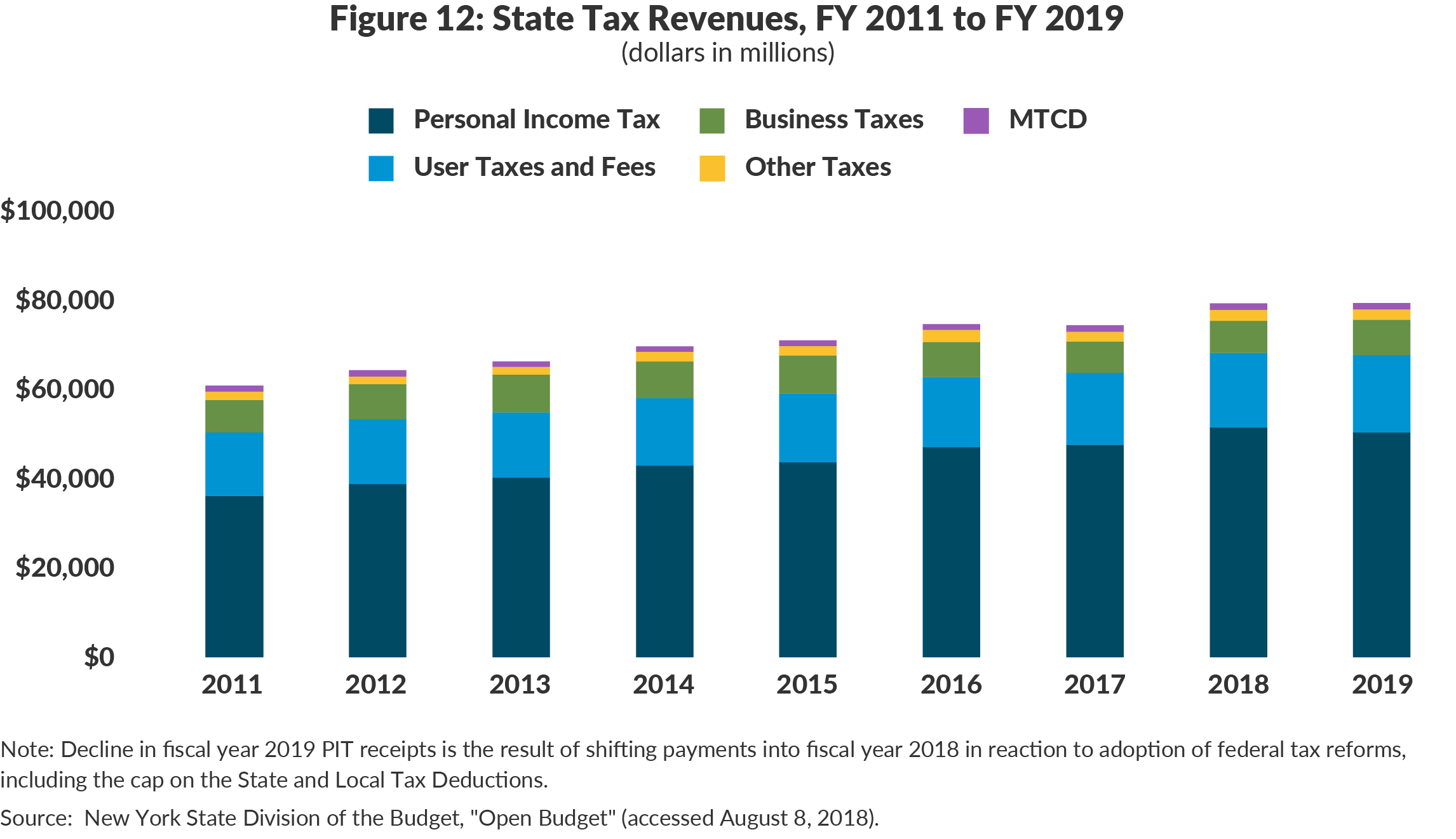 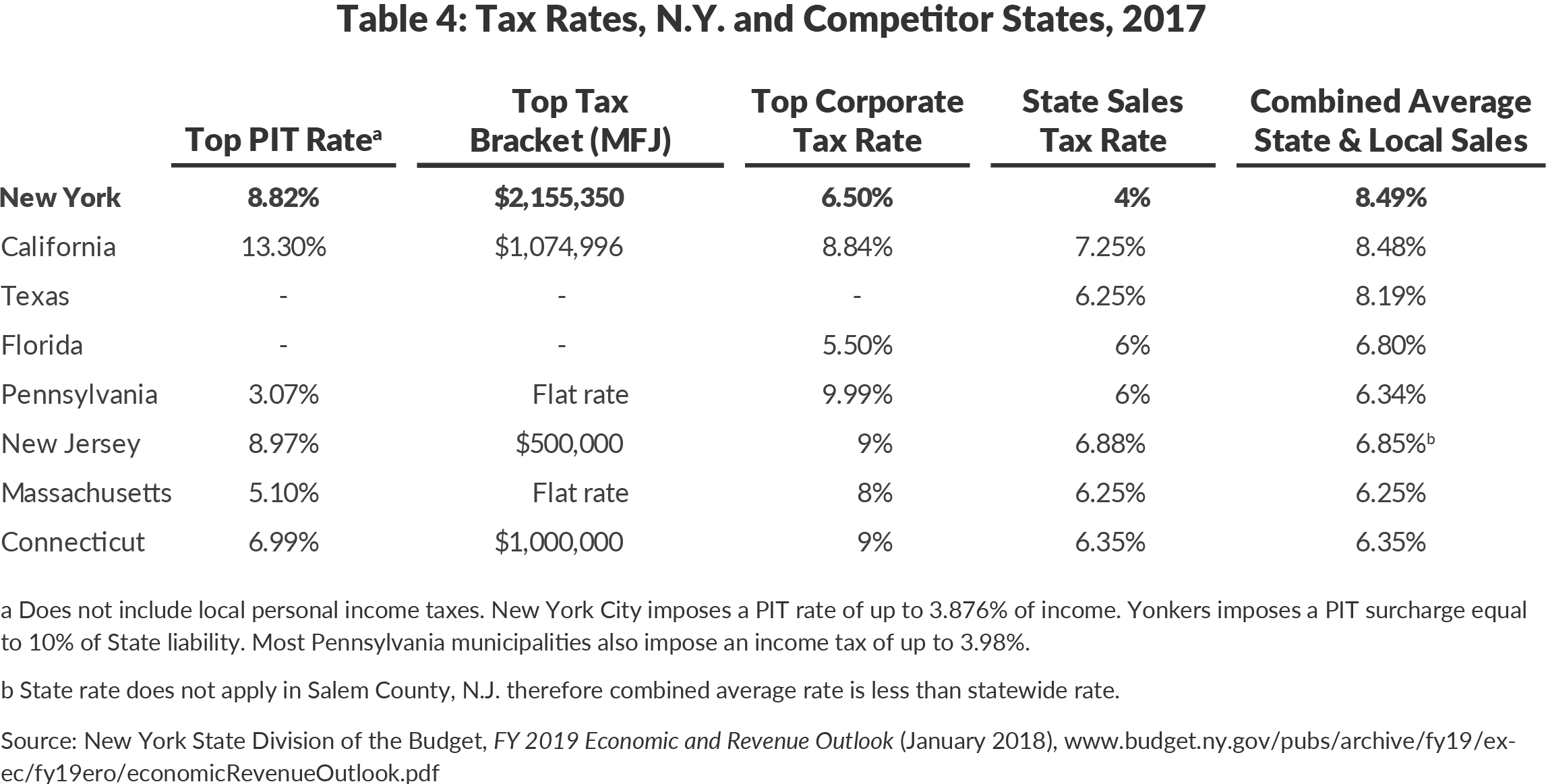 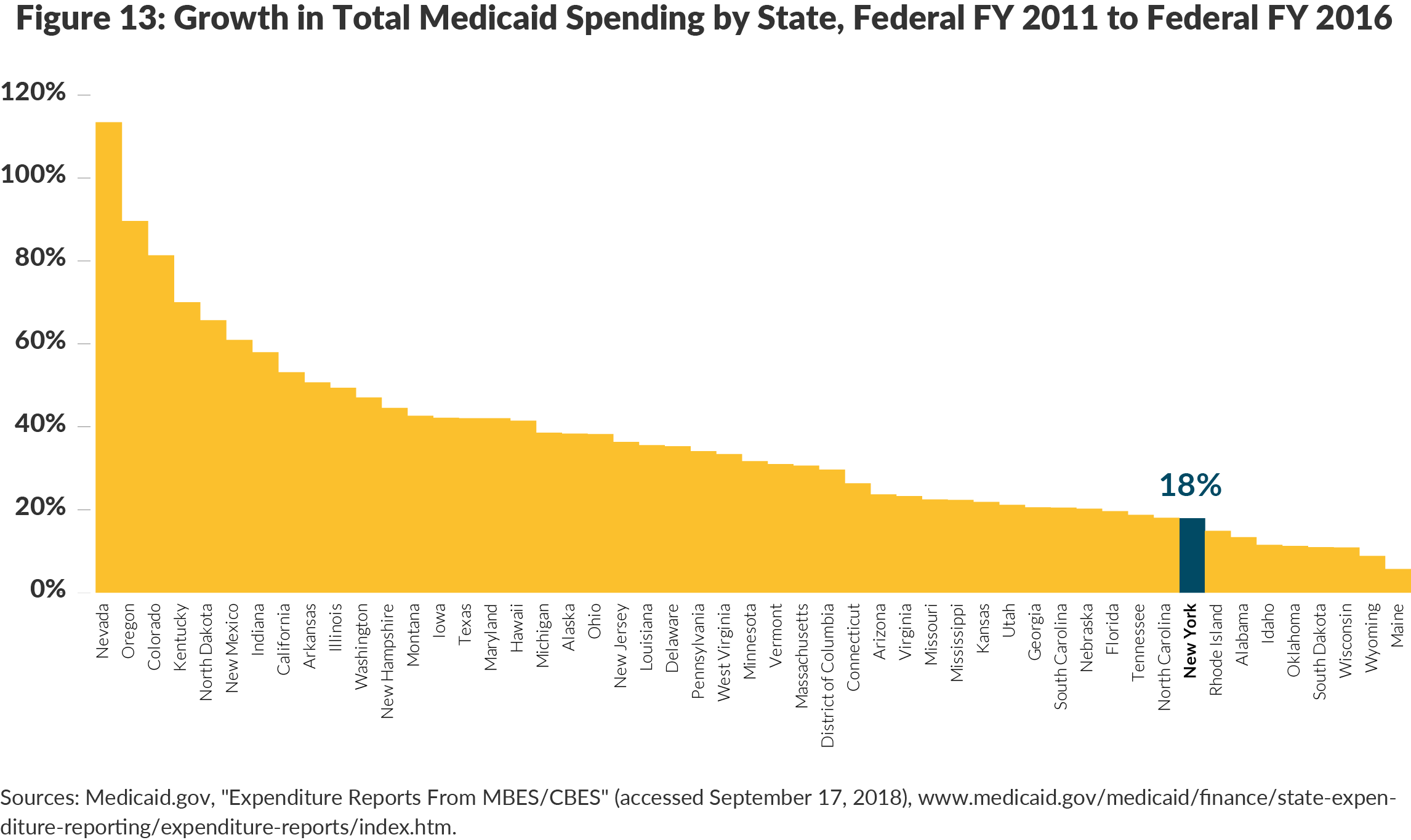 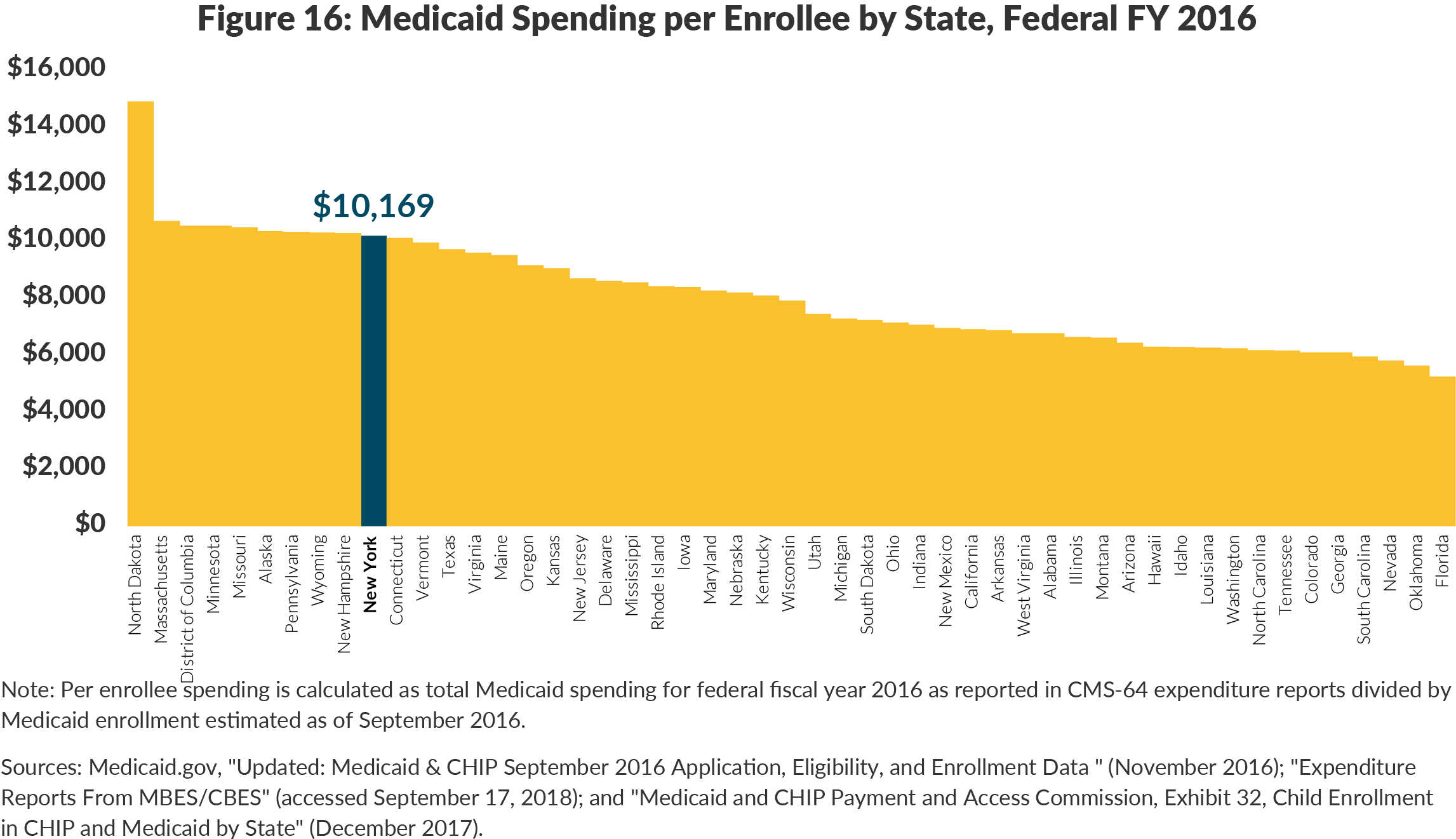 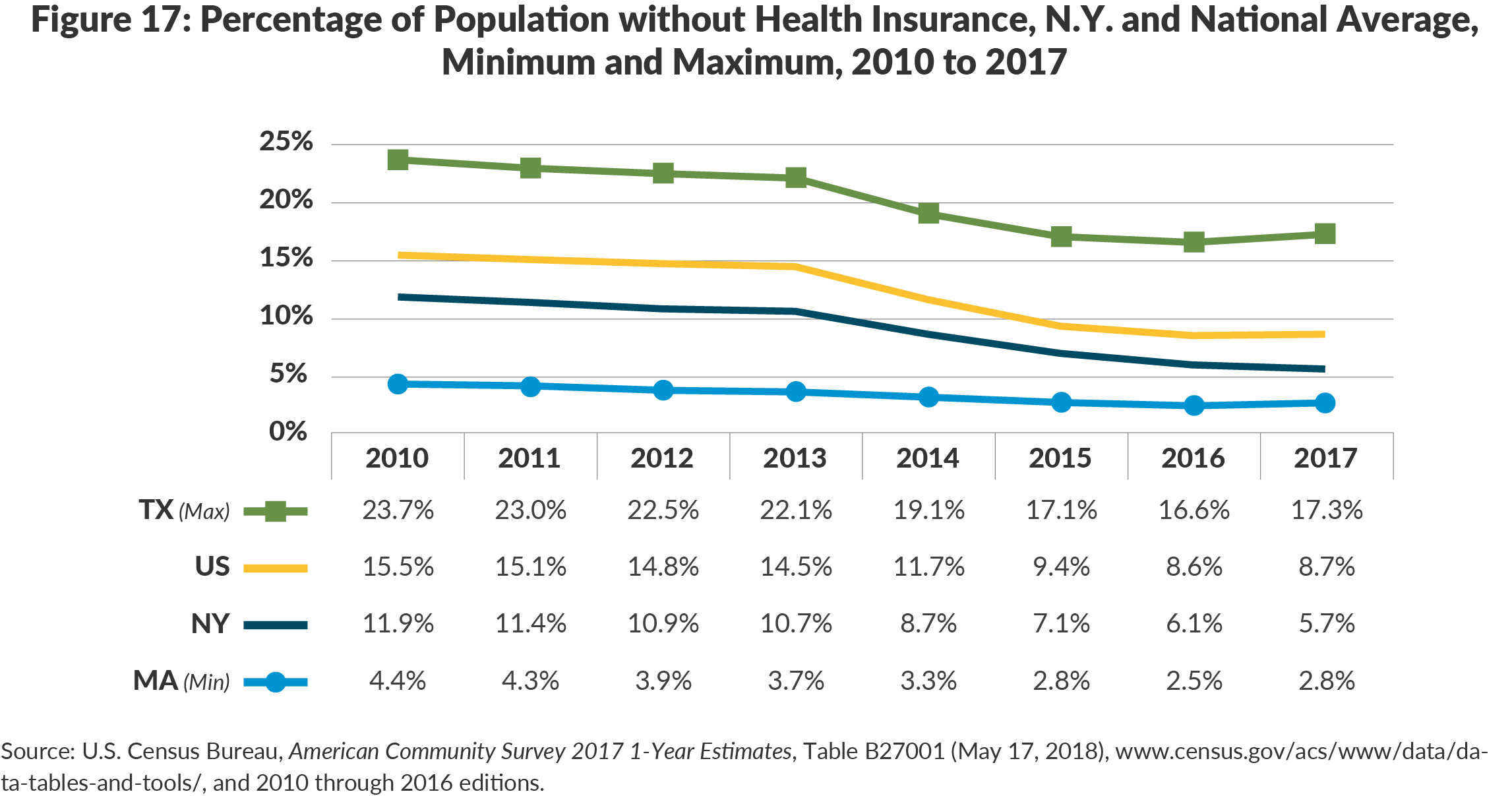 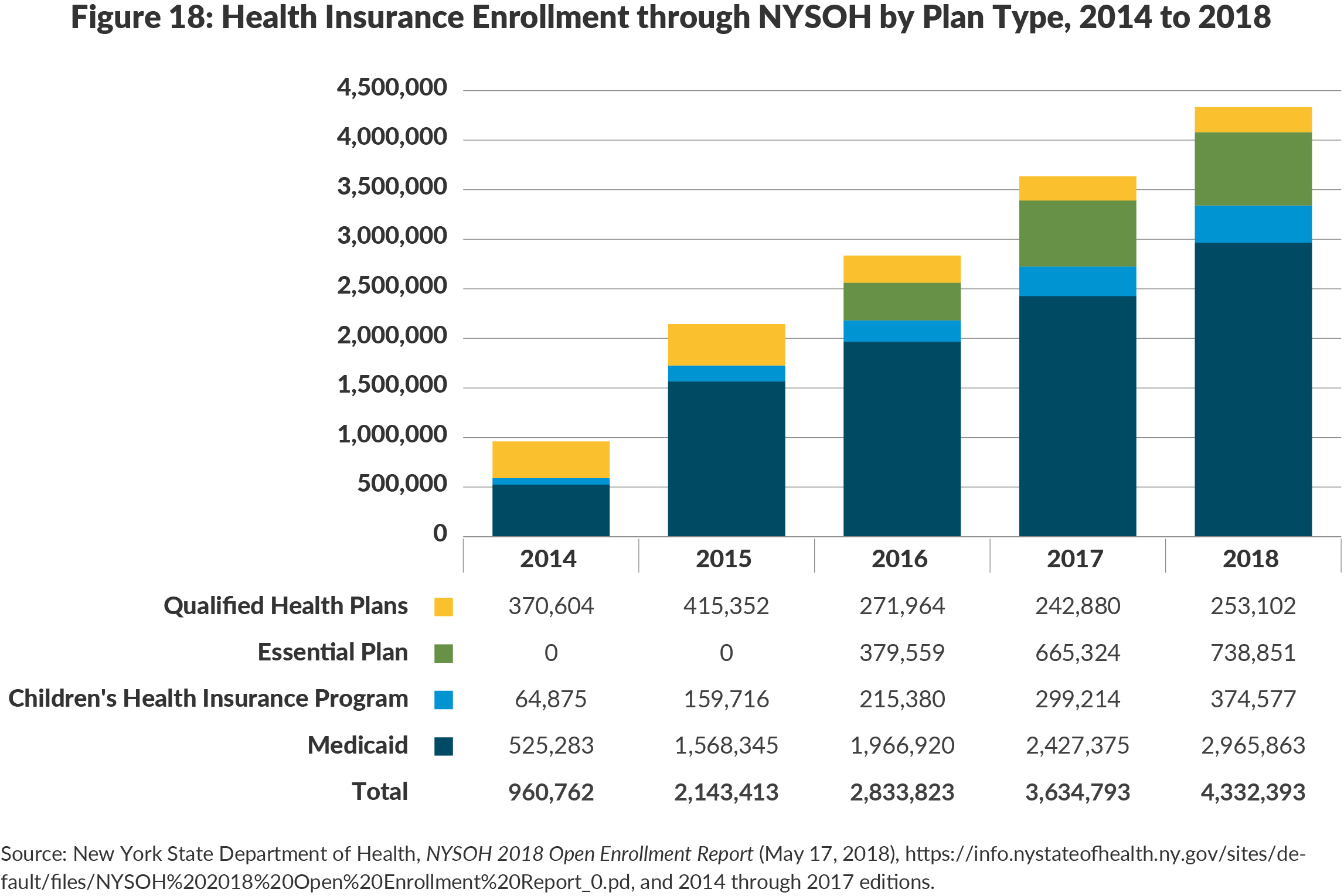 State support for the State University of New York (SUNY) and the City University of New York (CUNY) significantly exceeds the national average: $10,130 per full-time equivalent (FTE) student versus $7,120. State subsidies increased 7 percent in New York during the 10 years prior to school year 2015-2016 while declining 11 percent nationally. 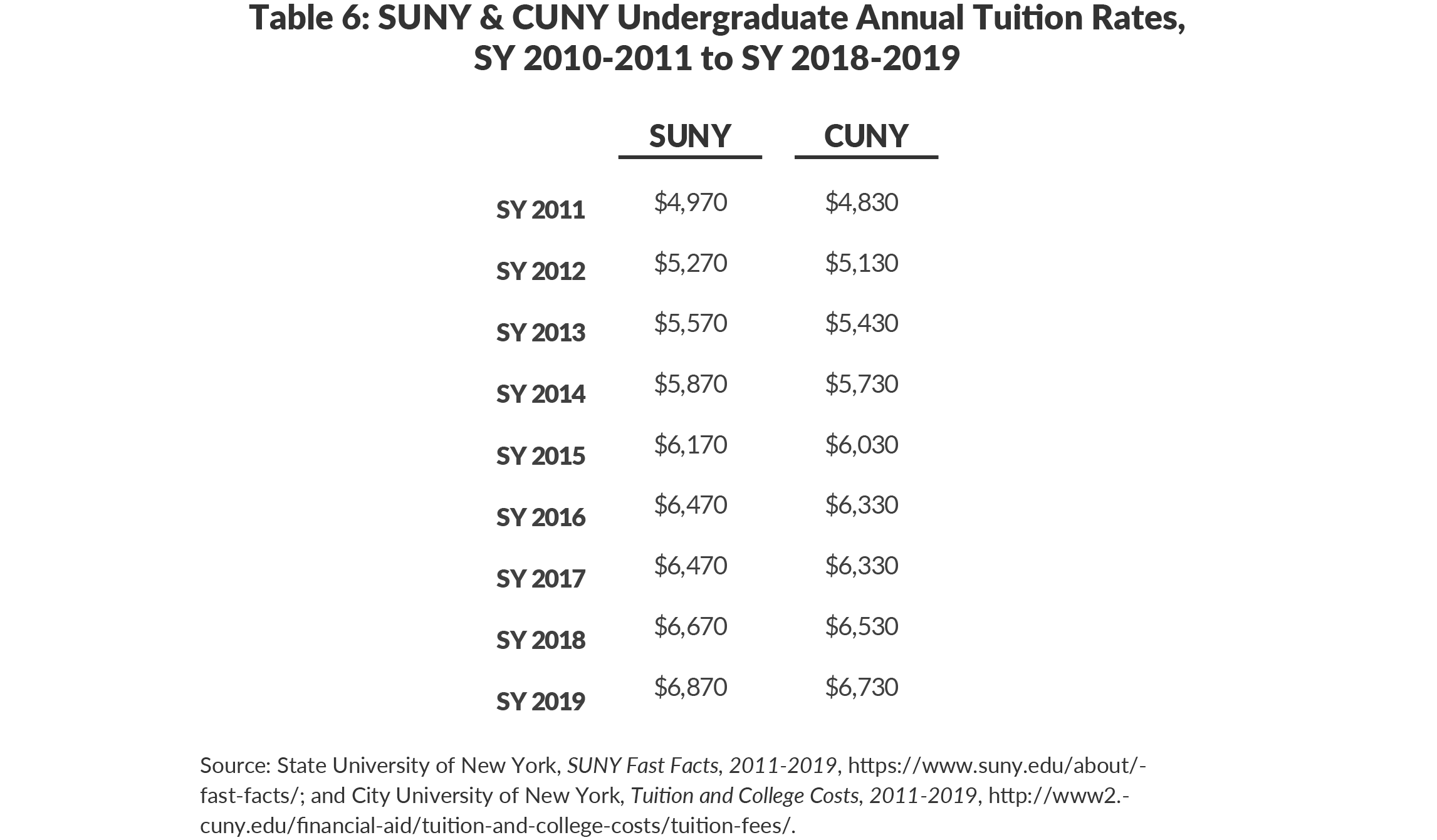 New York’s bridges continue to be in worse condition than the rest of the nation. Approximately 11 percent of the deck area on New York’s 17,456 bridges is rated as poor compared to 6 percent nationwide. The number of structurally deficient bridges–a designation given to bridges in need of repairs–owned by the State and its authorities decreased to 667 from 750.21 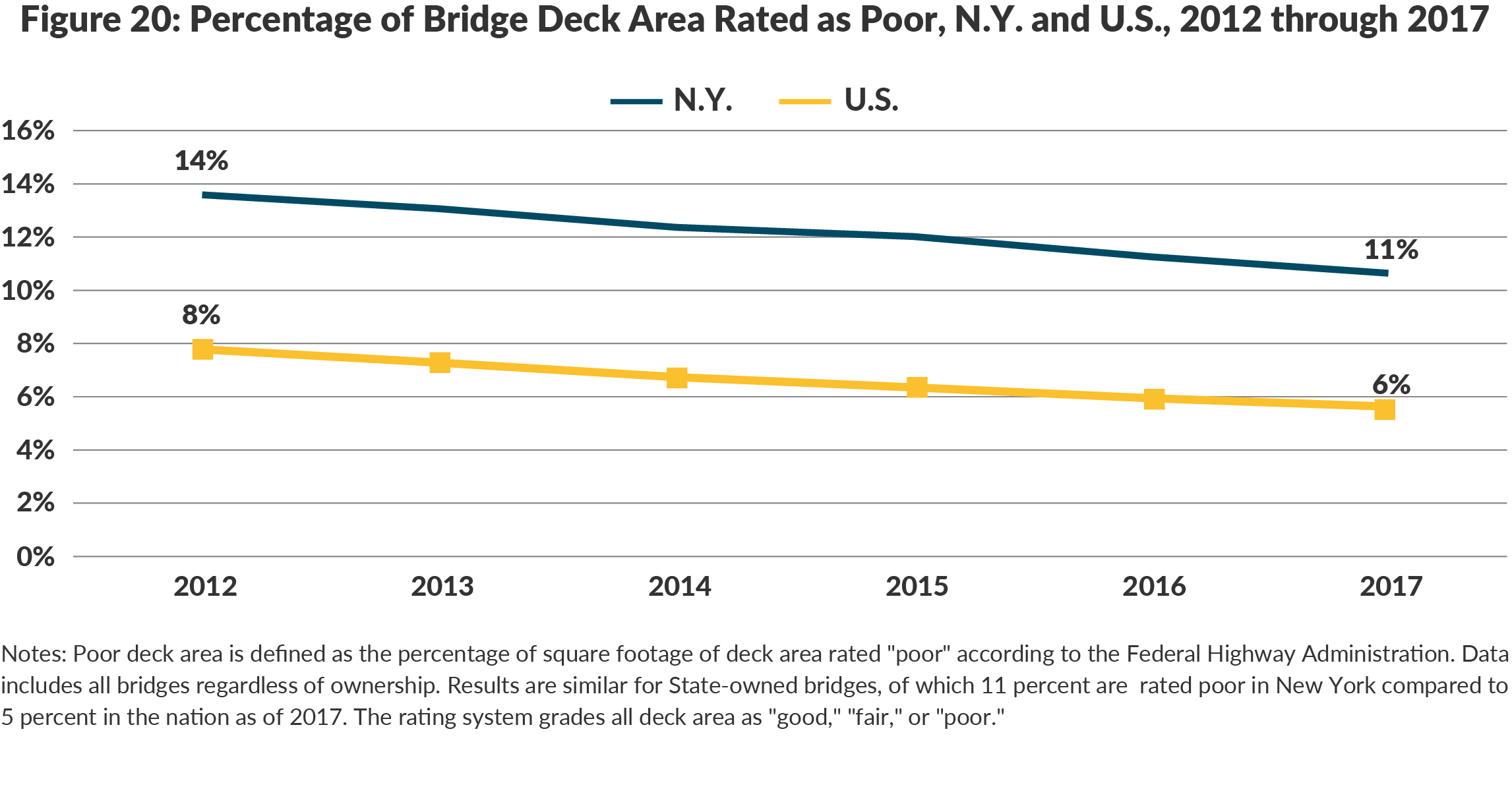 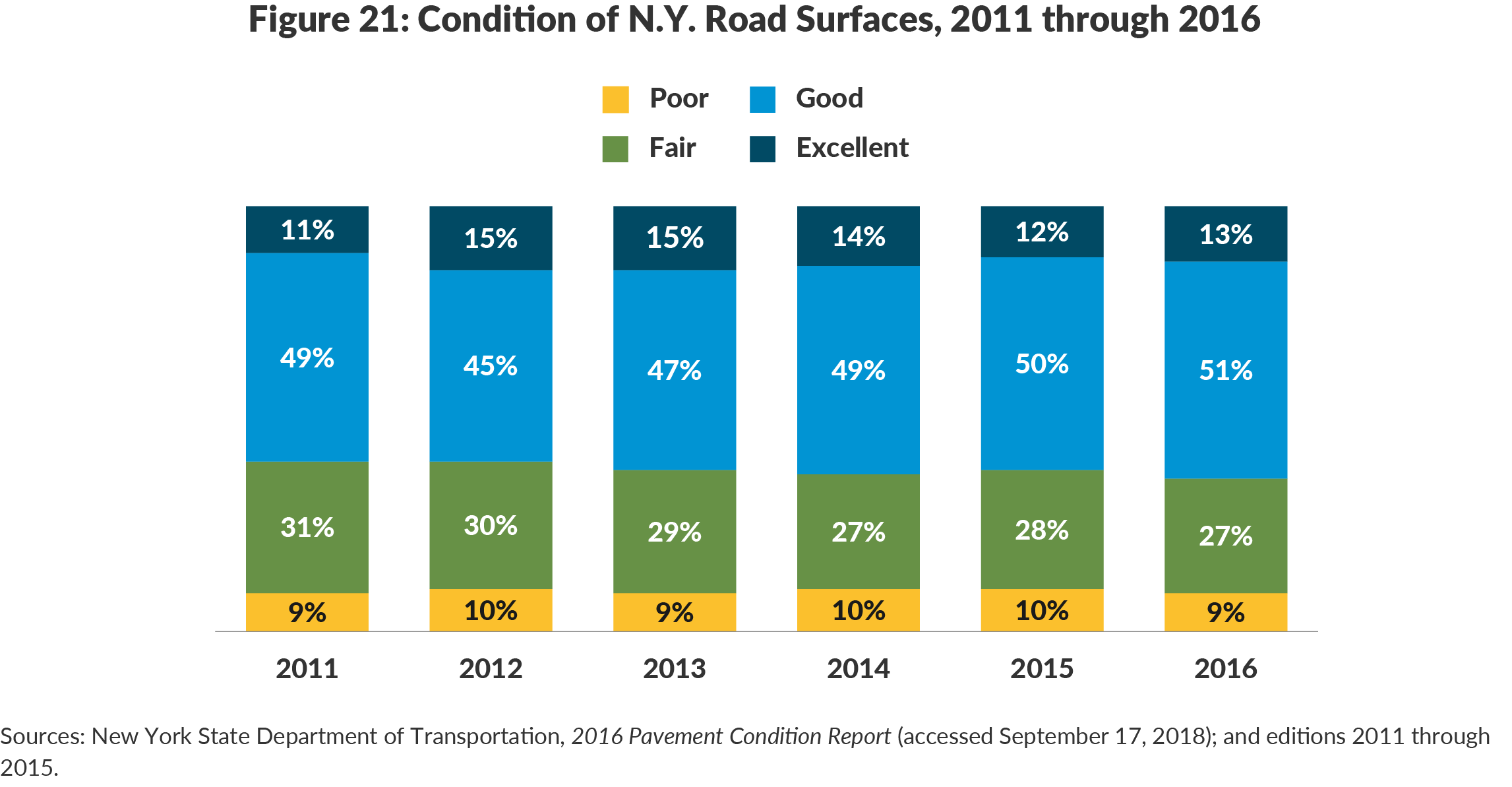 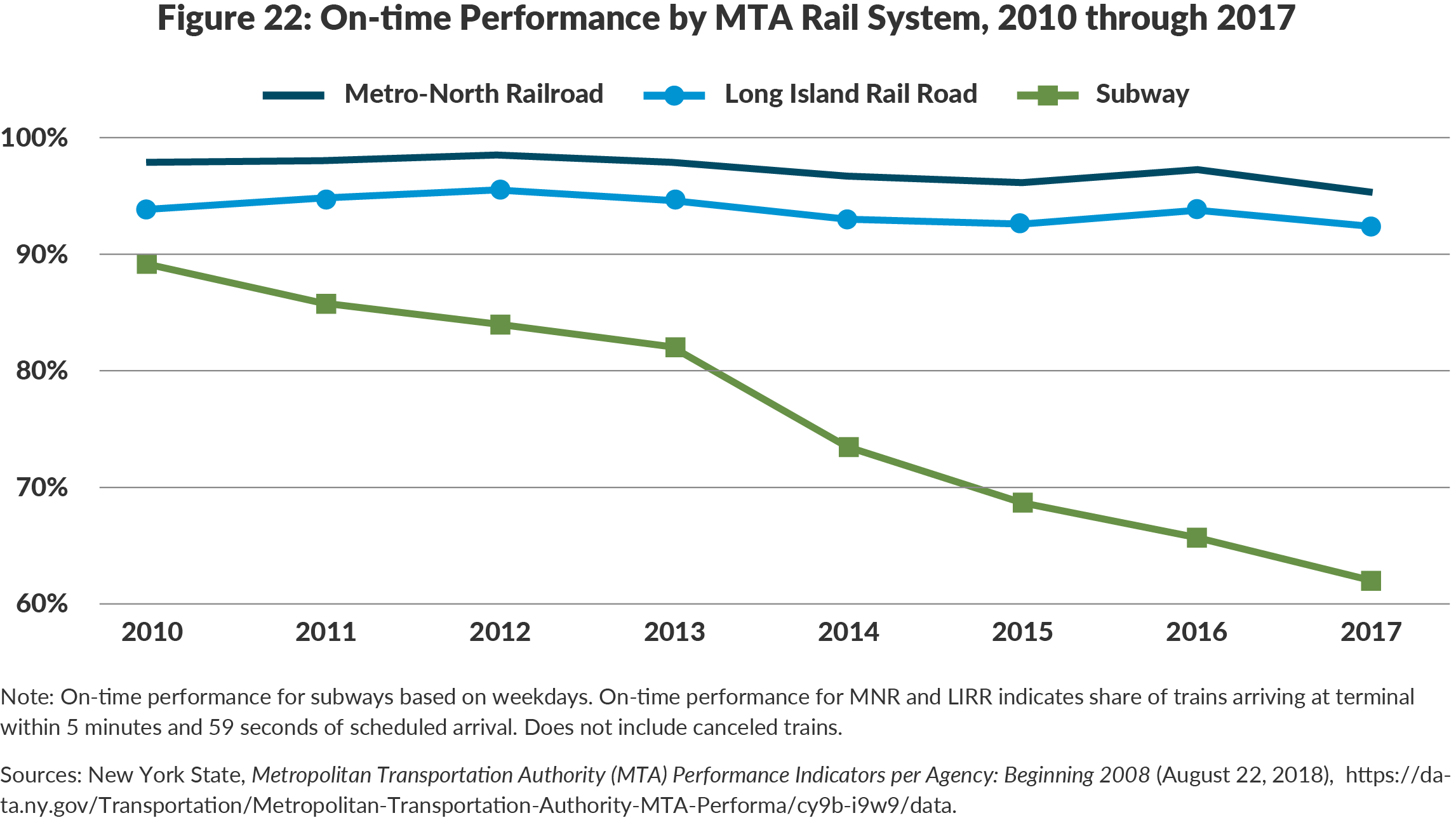 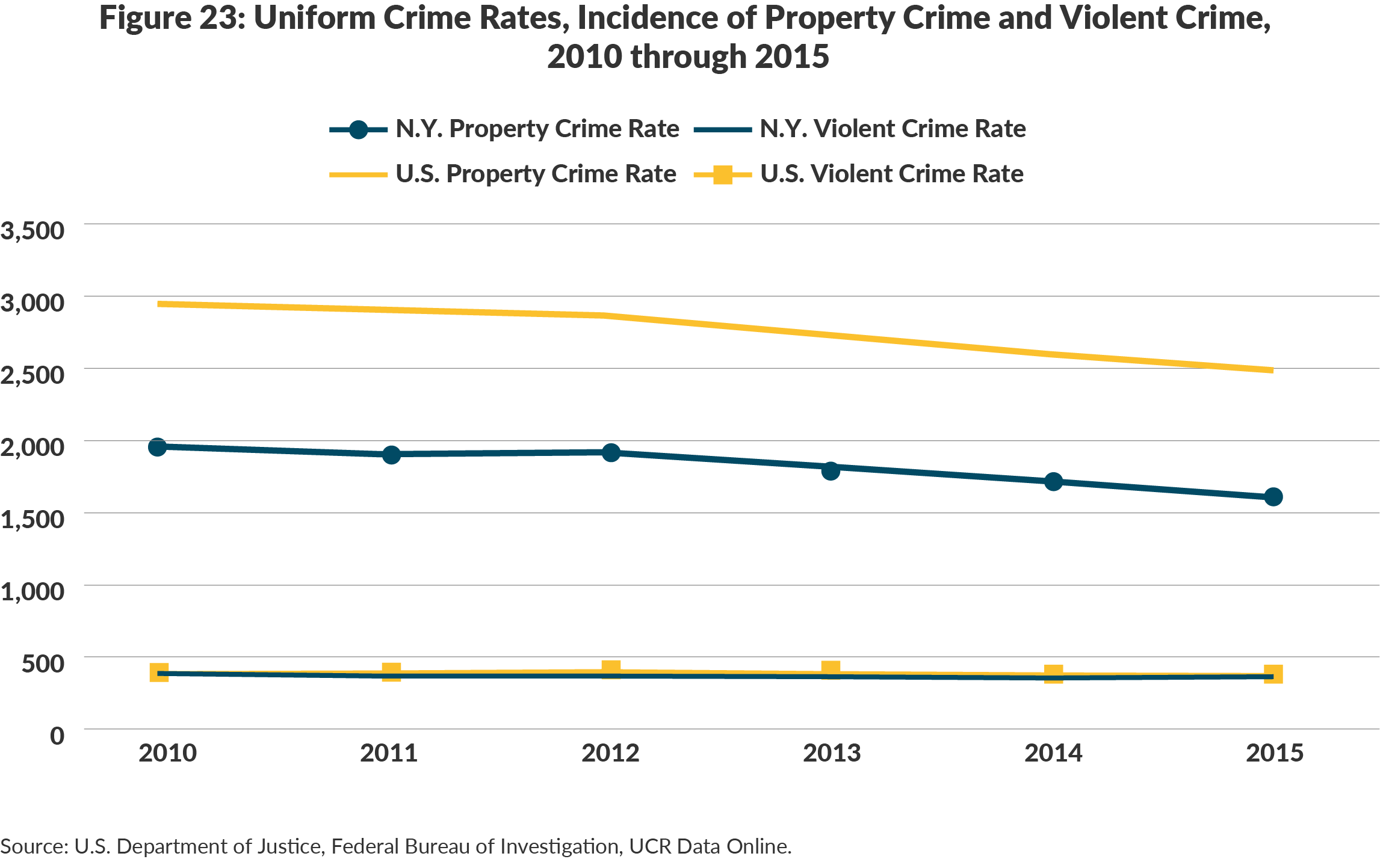 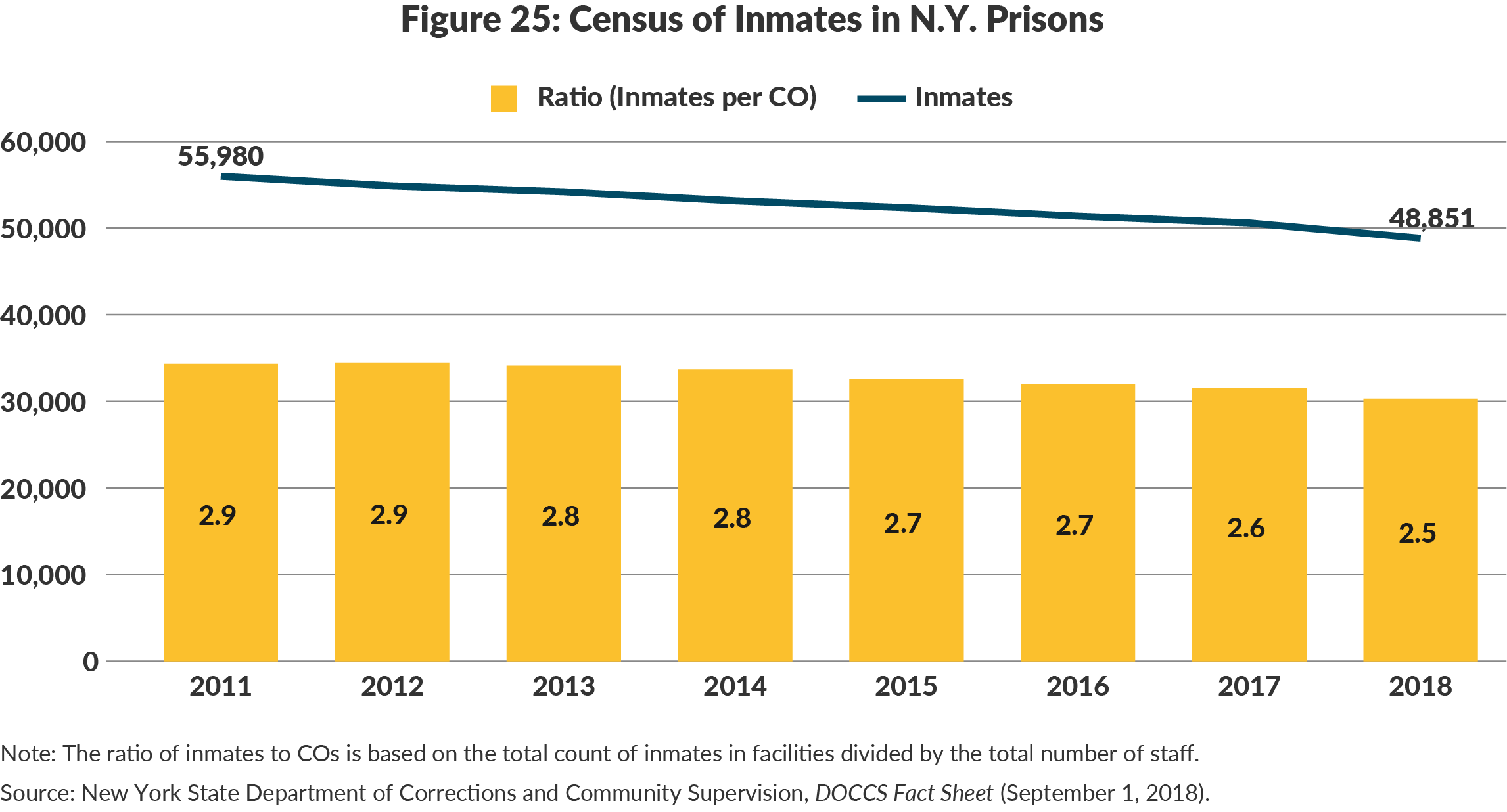 Staffing ratios reflect both the number and the type of inmates. While the number of prisoners has declined, the prison population has a greater proportion of inmates incarcerated for violent felonies. This can be attributed in part to the repeal of Rockefeller Drug Laws in 2009. In recent years the count of assaults on staff by inmates has increased, rising from 645 in 2013 to 798 in 2017, a majority of which are reported at maximum security facilities.24 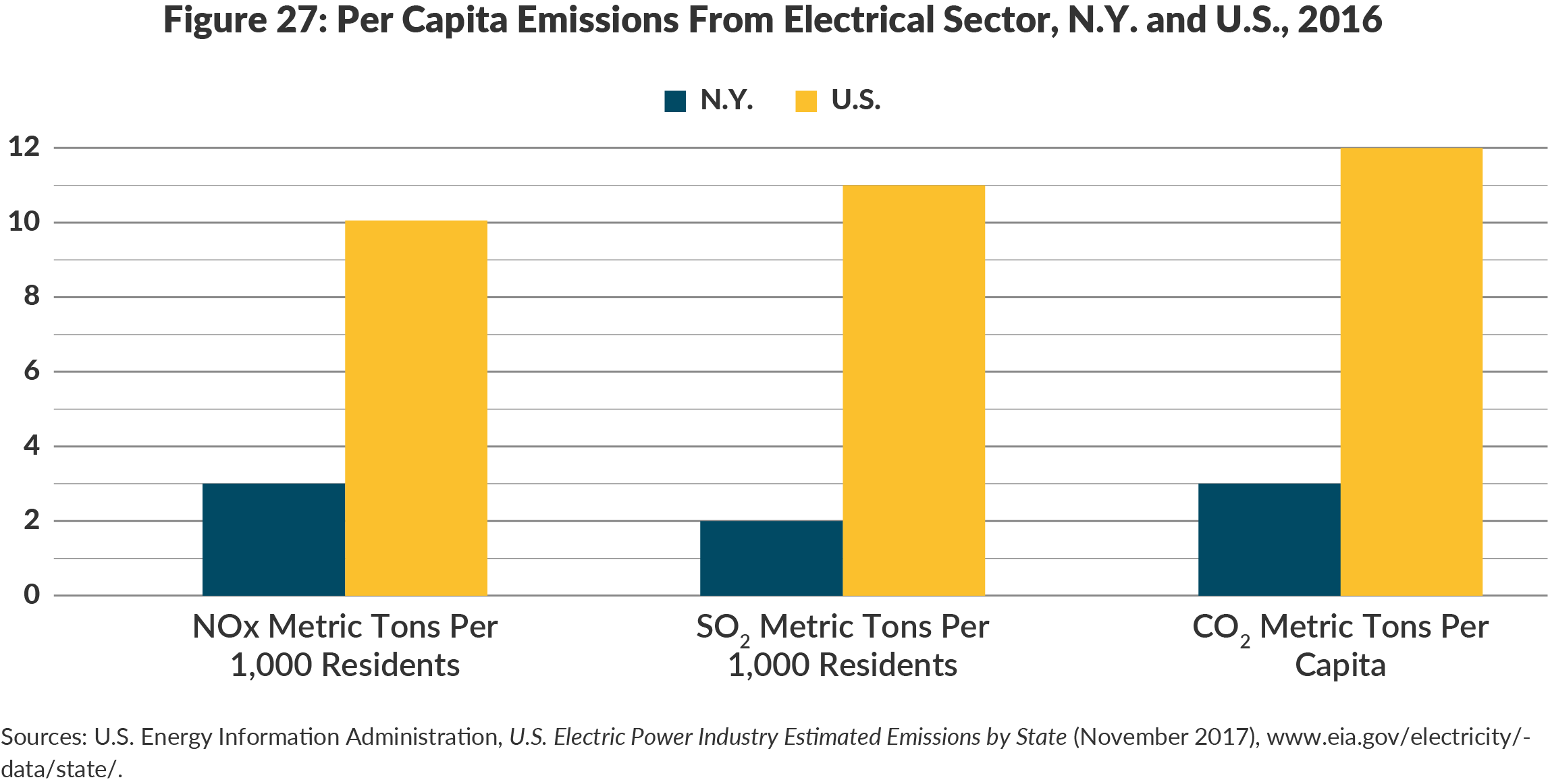 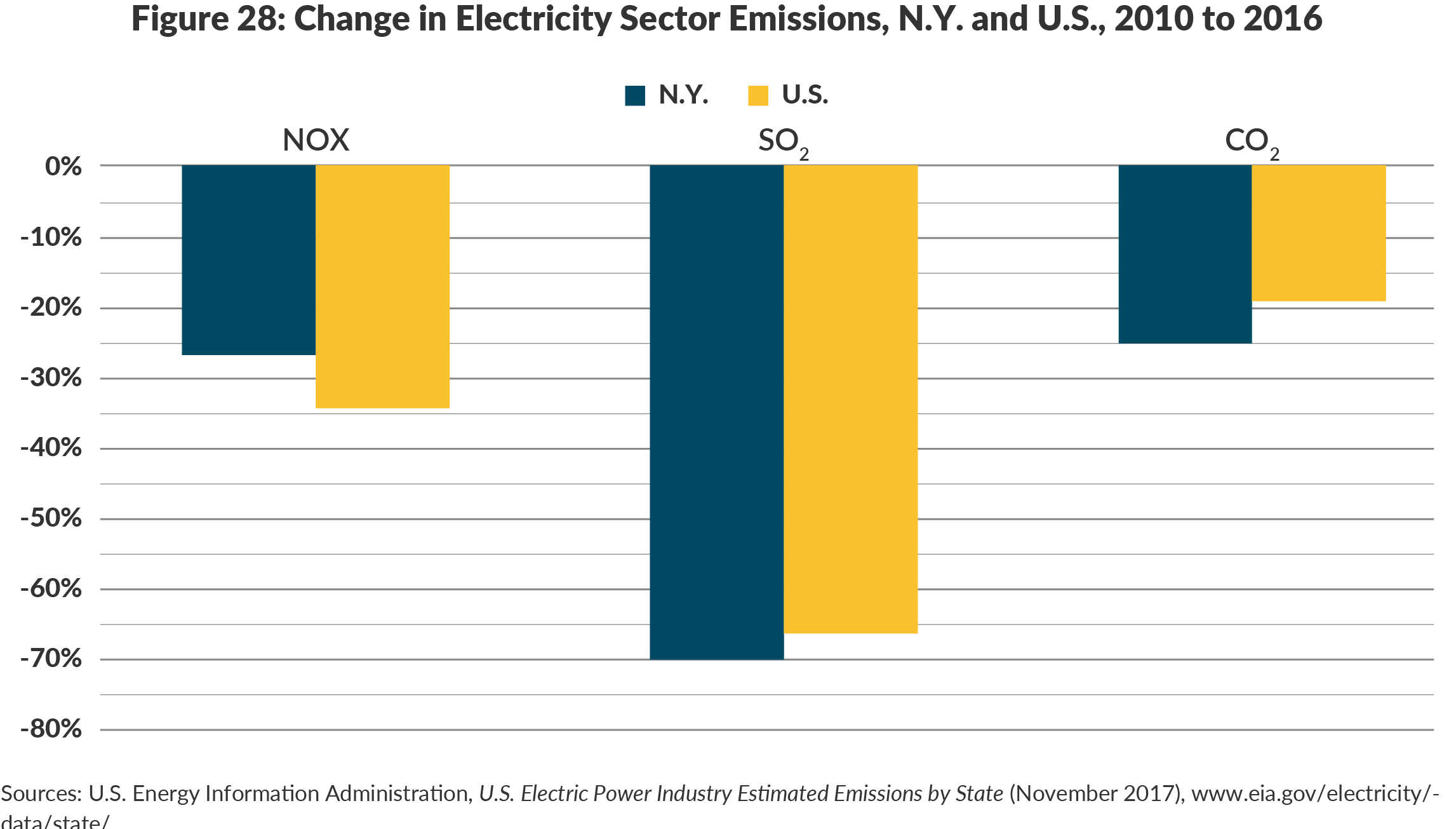 NYS Trends During the Cuomo Administration

Development Authority of the North Country, Financial Statements as of March 31, 2018 (March 31, 2018), www.abo.ny.gov/annualreports/PARISAuditReports/FYE2018/State/DevelopmentAuthorityoftheNorthCountry2018.pdf, and 2012 through 2017 editions.