The Ongoing Challenge of Producing a $2 Billion Surplus: An Update

On January 21 Governor Andrew Cuomo presented a $142.1 billion fiscal year 2015 Executive Budget. One of its the most anticipated features  – previewed at the State of the State address two weeks ago – was a projected $2 billion annual surplus beginning in fiscal year 2016-17. This surplus is achieved only if growth in state operating fund spending (total spending excluding capital funds and federal aid) is held at 2 percent or less. As the Citizens Budget Commission noted last week in its post, The Challenge of Producing a $2 Billion Surplus, with the two largest items in the budget, school aid and Medicaid, slated to grow at rates close to 4 percent, overall growth of only 2 percent requires everything else in the budget – state agency operations, fringe benefits, and all other local government assistance – to remain flat for the next four years.

The Executive Budget proposes growth in state operating fund spending in fiscal year 2014-15 of 1.7 percent and significantly reduces planned spending for fiscal years 2015-16 to 2017-18 from the previous November mid-year plan. But the proposal only goes partway toward a $2.0 billion recurring surplus beginning in fiscal year 2015-16.  Figure 1 below compares proposed spending in the Executive Budget financial plan to what was projected in November 2013 (the upper line) and spending levels under a 2 percent growth cap (the lower line). Although the Governor’s state operating funds spending plan of $92.0 billion for fiscal year 2014-15 is slightly lower than the 2 percent cap (1.7 percent), in subsequent years planned growth exceeds the 2 percent benchmark. 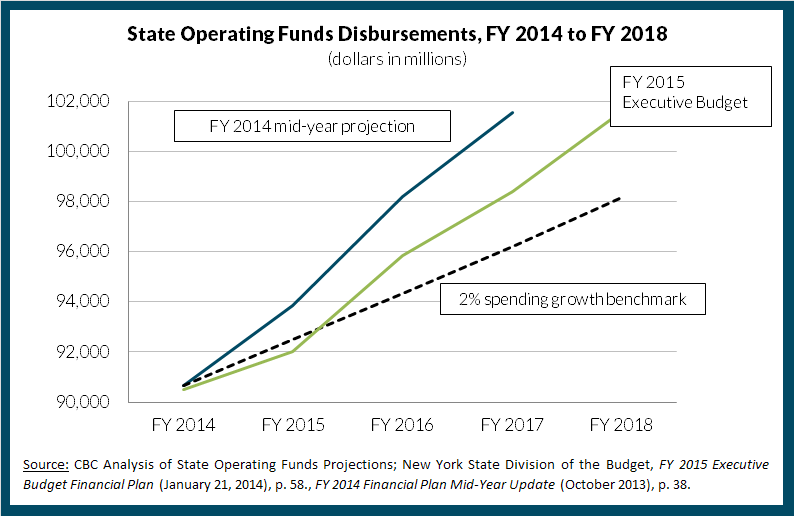 To make up the difference, “unspecified spending reductions” of $1.7 billion, $2.4 billion, and $3.6 billion in fiscal years 2015-16, 2016-17, and 2017-18, respectively, were inserted in the financial plan along with a footnote indicating these savings would result from adherence to the 2 percent limit. These placeholders are what the financial plan relies upon to turn budget gaps into budget surpluses after the Governor’s tax cut proposals are taken into account. 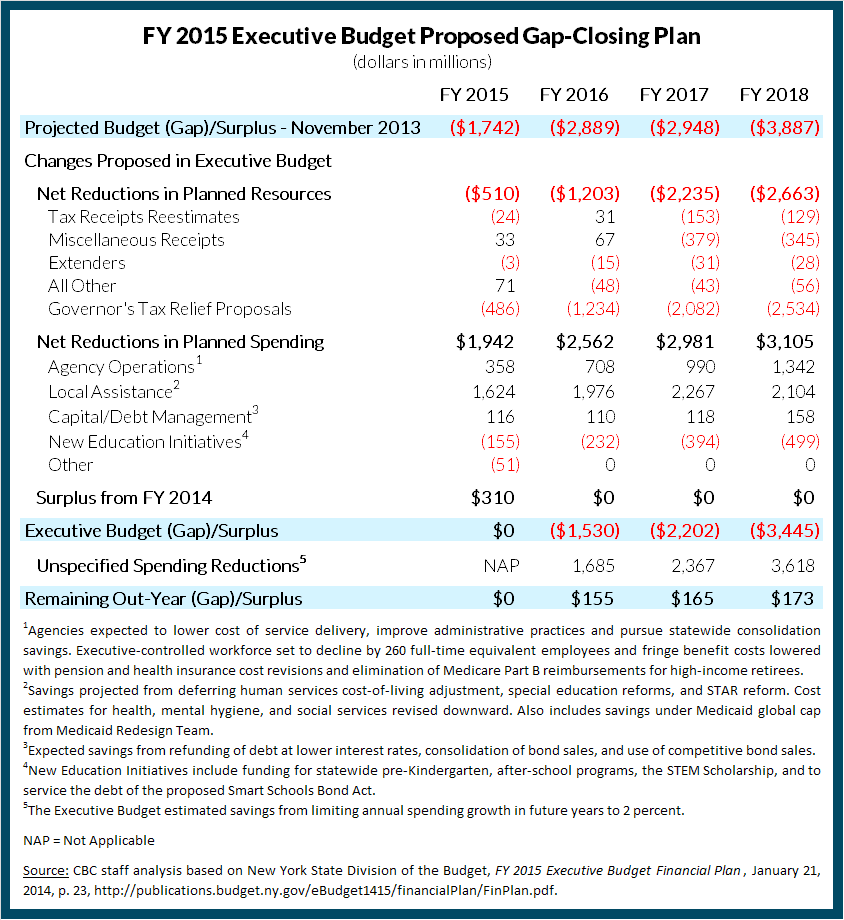 Continued spending restraint is a laudable goal – it helped Governor Cuomo turn budget gaps in double digit billions into three years of balanced budgets and manageable gaps in future years. And, as the Governor has tantalizingly shown, surpluses are within reach if in the coming years the legislature works with him to adopt budgets that keep state operating fund growth at 2 percent or less. However, hard choices lie ahead if they are to become a reality.

By Elizabeth Lynam and Jamison Dague