While overtime can be a win/win for the employer and employee—providing managers with flexibility and employees with premium pay for extra work—in New York City, overtime is increasingly a fiscal problem as spending rises rapidly, especially among uniformed employees, who receive two-thirds of all overtime pay.

Since most changes to address overtime require collective bargaining, and the City is about to embark on another round with the relevant unions, achieving a reduction in uniformed overtime spending should be part of the bargaining pattern. A uniformed labor-management committee, modeled on the collaborative effort between the Municipal Labor Committee and the Office of Labor Relations to develop health savings, could be convened to study the drivers of overtime and propose efforts to reduce the costs by a target percentage.3 While some solutions may be applicable to all uniformed unions, others will need to be tailored by union or by agency.

Overtime is hours worked in excess of one’s regularly scheduled workweek, generally more than 40 hours per week. Overtime is usually compensated at 1.5 times the regular rate of pay, though some employees may receive compensatory time (an hour of leave time for each additional hour of work). In addition to federal and state laws that regulate work hours and compensation, labor contracts set overtime parameters for most City employees.

Overtime is beneficial for employers because it provides flexibility, allowing management to respond to bottlenecks, emergencies, and staff absences without hiring new staff. In some instances, consistently high overtime might indicate the need to hire new employees; however, for City workers, especially those in the uniformed services, overtime can be cost-effective because of the high cost of fringe benefits. Fringe benefits, including pensions, exceed 65 percent of base pay for uniformed workers. Therefore, increased uniformed headcount would not necessarily generate savings for the City.

The City has increased overtime expense in the Adopted Fiscal Year 2018 budget to $1.4 billion, a nearly 25 percent increase over the Fiscal Year 2016 Adopted Budget.  However, given the pattern in recent years, this level is likely to be insufficient; City’s fiscal monitors concur and estimate that the fiscal year 2018 uniformed overtime budget is between $125 million and $169 million too low.4

Growth in overtime is a function of both the number of hours and wage increases. Events and disasters can significantly impact overtime spending; for example, fiscal year 2013 saw a 14 percent increase over 2012, in part due to Superstorm Sandy. From fiscal years 2009 to 2016, overtime spending grew by 7.1 percent a year (See Figure 1); cumulative growth was 62 percent, from just over $1 billion to $1.7 billion. 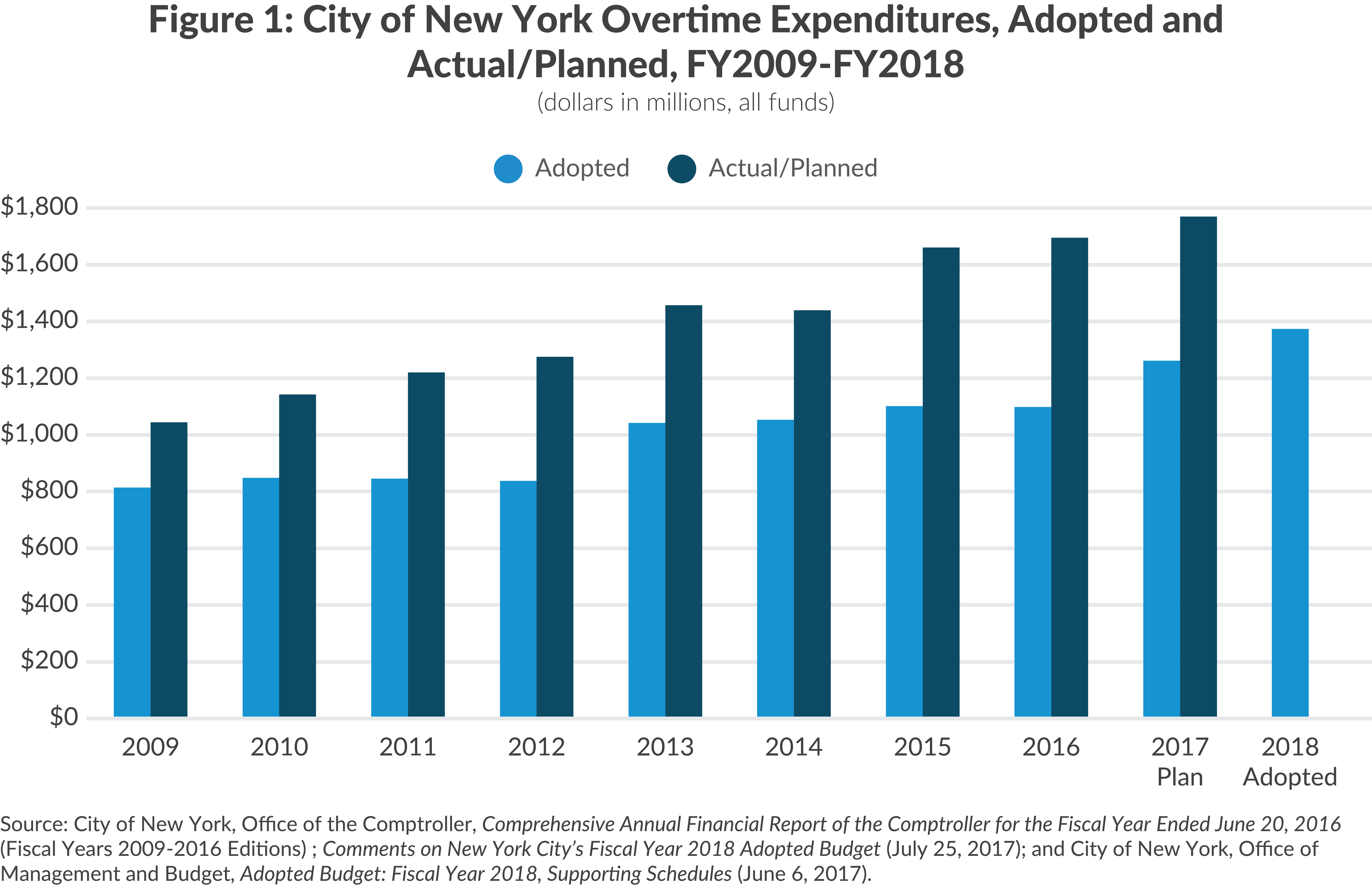 The fiscal year 2016 spending of $1.7 billion is equal to 8 percent of City’s spending on salaries.5 The New York City Comptroller reported that, as of June 2017, overtime spending for fiscal year 2017 was projected to be $1.8 billion, a 4.5 percent increase over the prior year.6 (A portion of this overtime expenditure is attributable to security at Trump Tower with the City expected to receive Federal funds to cover the expense in part.7) 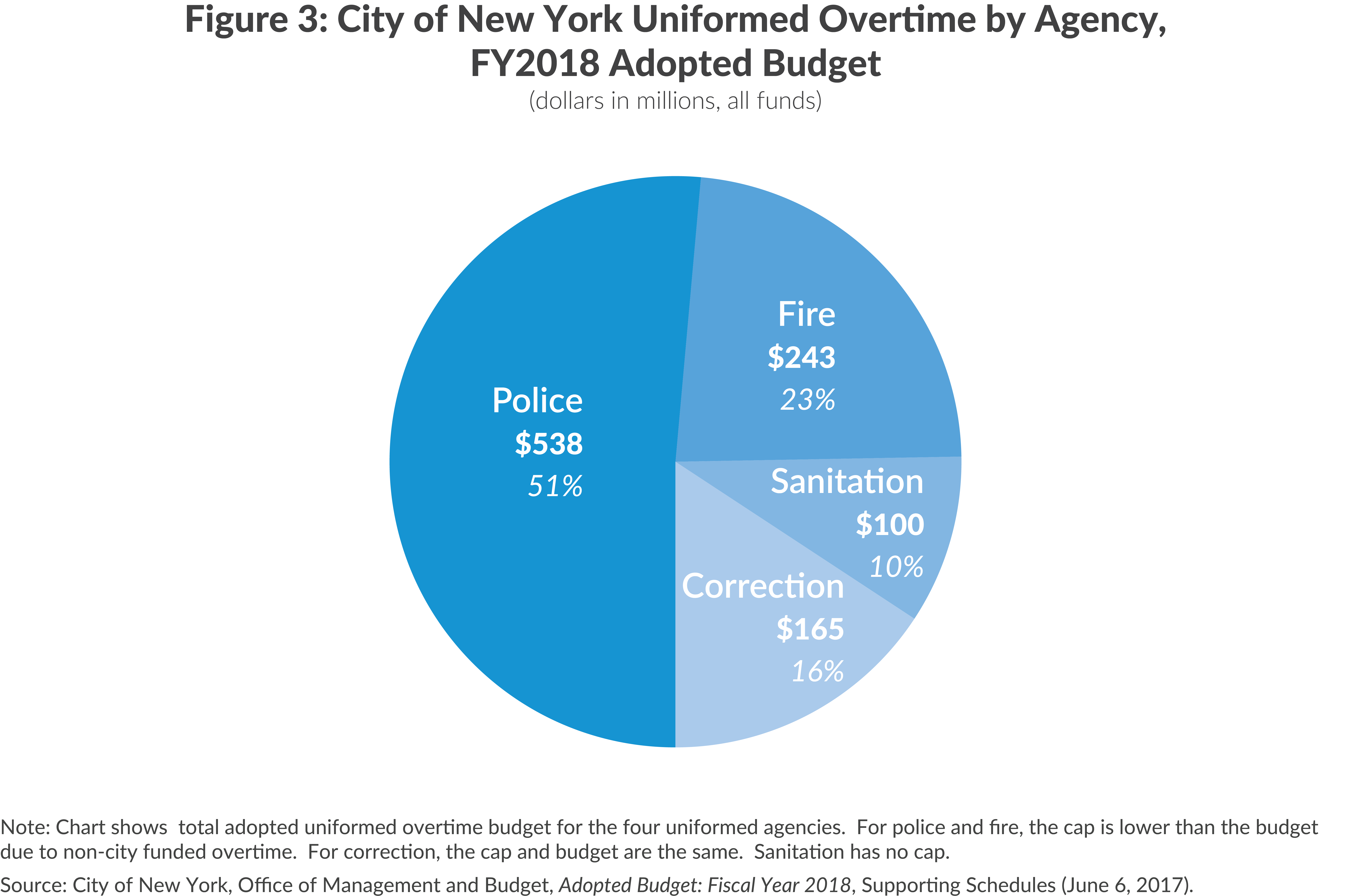 Overtime expenses are about 18 percent of regular salaries for uniformed employees in the NYPD and DSNY, 20 percent at DOC, and 26 percent at FDNY; relative to the total departmental budget for salaries and other pay, uniformed overtime remains a substantial share, between 11 and 14 percent.8

Overtime Caps for Three Uniformed Agencies May Be Exceeded

The budgeted decline in uniformed overtime in fiscal year 2018 assumes the successful implementation of overtime caps in three of the four uniformed service agencies. While the caps are an acknowledgement that spending on uniformed overtime must be controlled, they are dollar amounts based on recent usage, trends, and projected increases in uniformed headcount.

The Preliminary Financial Plan for Fiscal Year 2018 established uniformed overtime caps for FDNY and DOC; the current levels for fiscal year 2018 are $228 million and $165 million, respectively.  There is no explicit cap for DSNY.

Drivers of Overtime at Uniformed Agencies

Unexpected events, work culture, collective bargaining rules, and aspects of uniformed agency staffing and workload contribute to the high rate of overtime. Some of these factors apply to all four uniformed agencies, while others are applicable to only some agencies.

Collective bargaining agreements between the City and the uniformed labor unions often limit the ability of managers to alter schedules and work assignments.15 For example, contract provisions generally prohibit changes to tours or shifts “in order to preserve spirit” of overtime.16 Some contracts require minimum overtime hours for employees called in to work, or guarantee overtime pay for travel time to assignments other than the employee’s permanent location.17

The uniformed agencies, except for the NYPD, rely on fixed post staffing, which means that a minimum number of staff must be on duty to fill the positions. Fixed post staffing contributes to overtime in two ways: coverage for vacant positions and filling in for staff out on leave.

First, if the agency is understaffed due to high rates of turnover or a large number of vacant positions, existing staff will be called in on overtime to meet staffing needs. As the process for hiring employees is lengthy, this can significantly impact overtime.18 Most of the uniformed agencies hire in classes, meaning a large group of entry-level employees is hired at once and undergoes training prior to being assigned to posts. 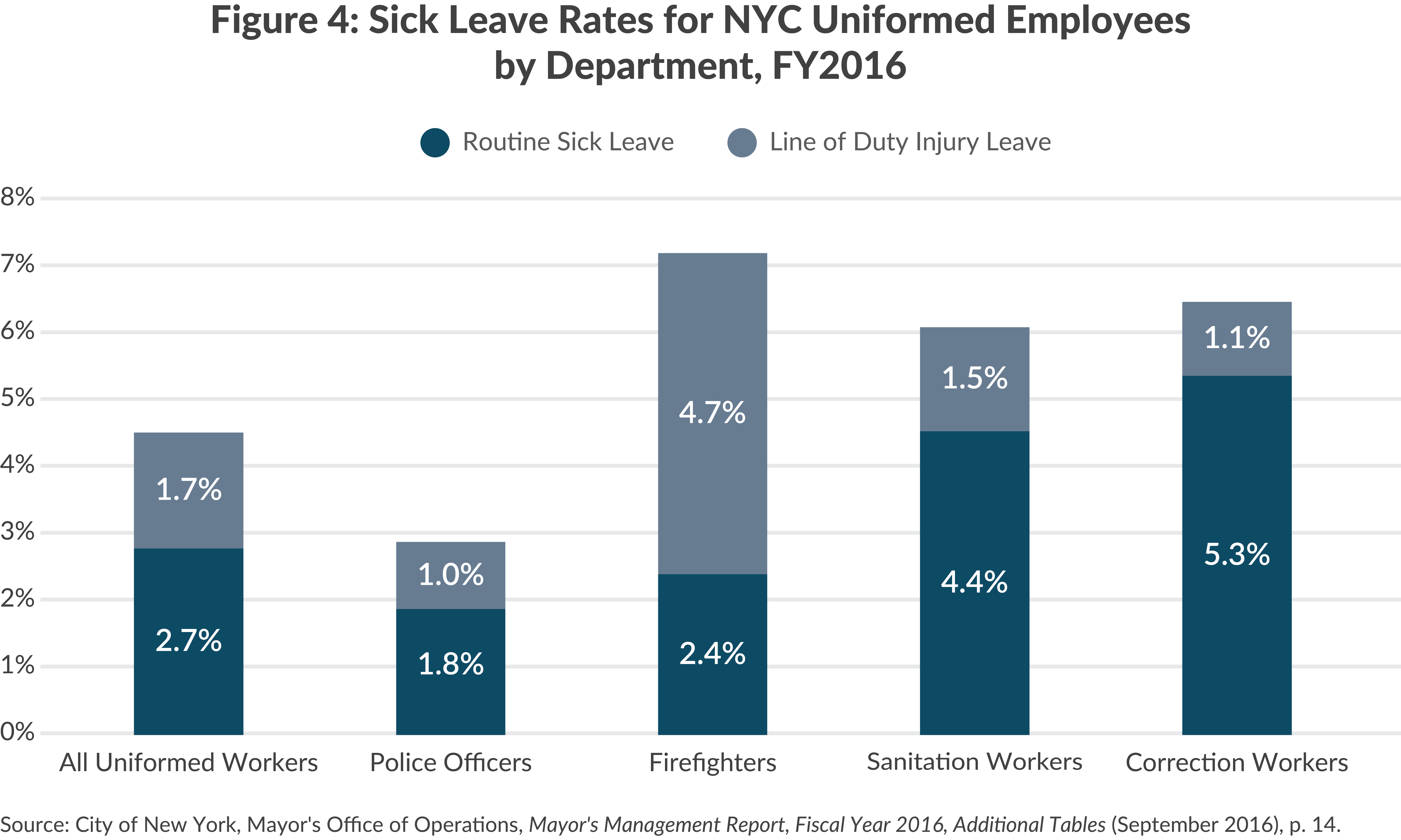 Unlike the other uniformed agencies, the police department is not staffed based on fixed posts.  The department has more flexibility in staffing assignments and while officers are assigned to precincts or special units, these units don’t have fixed staffing ratios. Furthermore, absenteeism is not a driver of overtime as the rate at NYPD is the lowest of the uniformed agencies. (See Figure 4.)

Three causes of police department overtime stand out. (See Figure 5.)  The first is special events, which accounted for one-quarter of the uniformed overtime in fiscal year 2016.  This category includes overtime related to parades, which are fairly consistent from year to year.  Less consistent are emergencies and other unanticipated events that generate overtime, such as Trump Tower security, Occupy Wall Street, and Superstorm Sandy.  While the nature and timing of these events is unpredictable, the City can count on a certain amount of overtime due to unplanned events and emergencies each year.  Investigations (19 percent) and new arrests (15 percent) are two other areas that significantly contribute to overtime.  Both categories are driven by the need to extend the workday in order to complete police work. 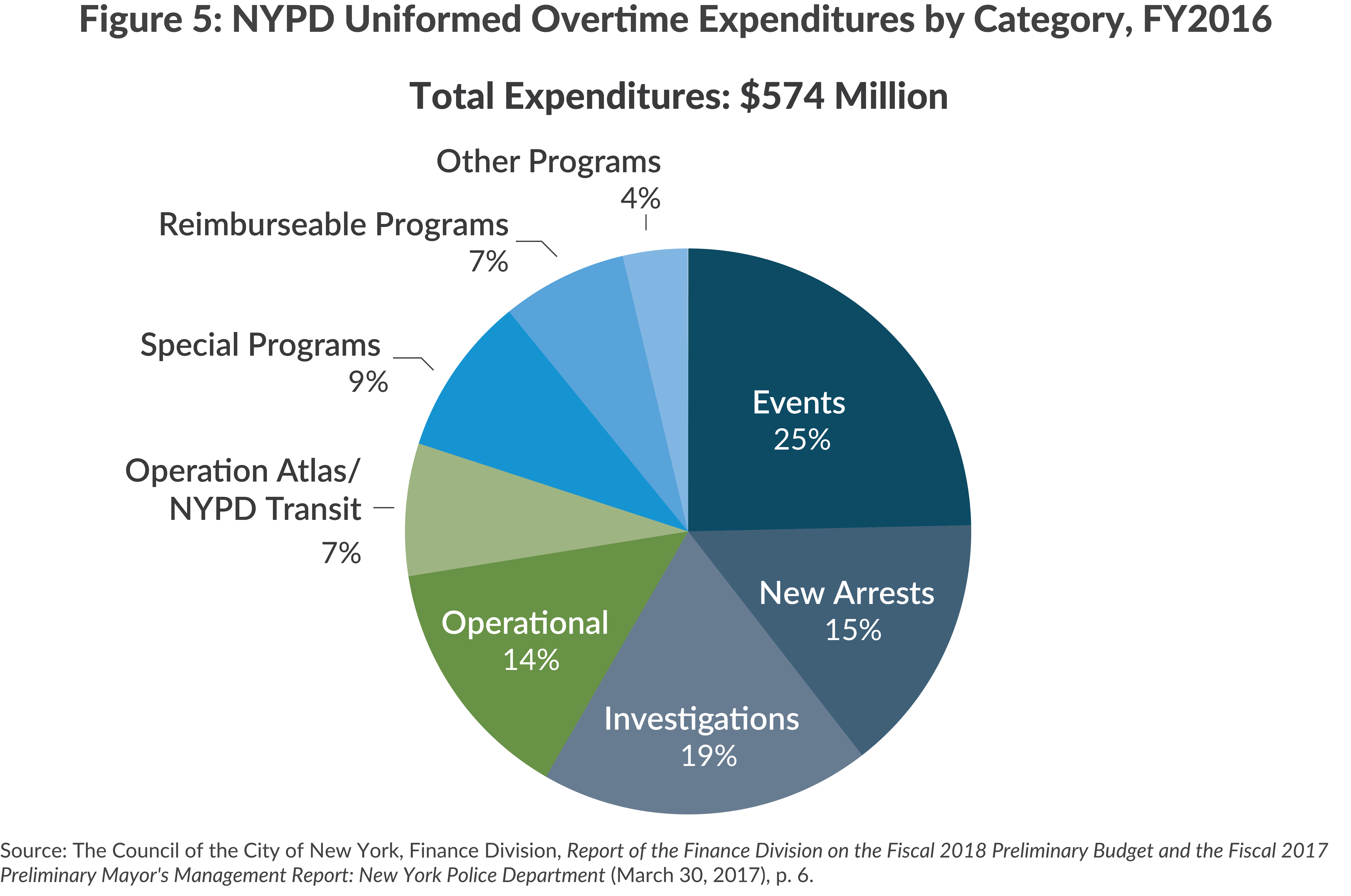 Payroll data bear out the high use of overtime at the FDNY. (See Table 2.) Firefighters, lieutenants and captains worked between 372 and 414 overtime hours, on average, in fiscal year 2016. The average increase in compensation was between $28,000 for firefighters and $36,000 for captains, approximately one-third of the regular pay. Fire marshals had even higher rates, but there were significantly fewer on staff. Battalion chiefs and chiefs do not generally receive overtime compensation.

Staffing at FDNY is based on fixed posts.  There are six types of companies, though most are engine or ladder companies.23 Currently, the City has 198 engine companies, which operate fire engines that secure water and extinguish the fire. An additional 143 ladder companies operate fire trucks that are responsible for search and rescue, entry, and ventilation at a fire. Staffing for engine companies is 4 or 5 firefighters and 1 officer, while ladder companies are staffed with 5 firefighters and 1 officer. Because the City is required to maintain these staffing ratios if a firefighter is unable to report to duty, the department must call in a firefighter (generally on overtime) to cover the post.

Decreasing headcount at the department contributed to an increase in overtime. (See Figure 6.) In 2007 a lawsuit was filed alleging discrimination in FDNY hiring.24 While this litigation was pending, the department was prohibited from hiring and there were no new firefighter classes from July 2008 until January 2013.25 Due to employees leaving the department for reasons such as retirement or resignation, uniformed headcount decreased from 11,459 at the end of fiscal year 2009 to 10,180 at the end of fiscal year 2013, an 11 percent decline.  Concurrently, the use of overtime to maintain staffing ratios more than doubled, going from $128 million to $280 million. FDNY hiring has resumed, and uniformed headcount increased nearly 8 percent from fiscal year 2013 to fiscal year 2016; however, overtime spending decreased just $3 million over that time period.26 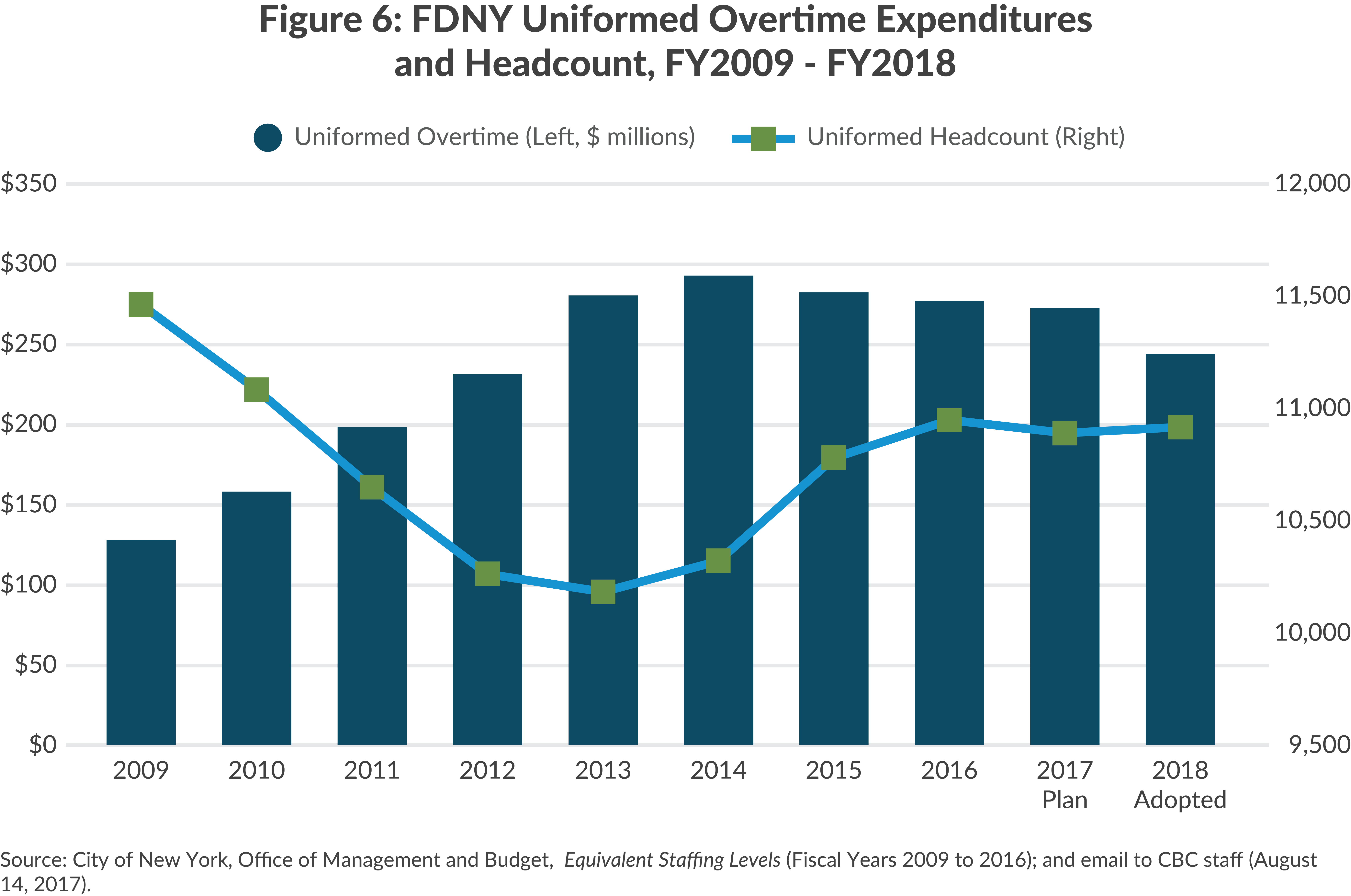 Firefighter schedules are based on groups which are scheduled to work either 9 a.m. to 6 p.m. or 6 p.m. to 9 a.m. (a 9-hour day shift and a 15-hour night shift). Based on the official schedule, a group would be on for two consecutive 9-hour shifts, off for two days, on for two consecutive 15-hours shifts, than off for three days, before repeating the cycle.27 Shift changes at 6 p.m. can increase the use of overtime because these are fairly busy times for the FDNY; some cities with 24-hour shifts have one shift change in the morning, thereby avoiding the busy 6 p.m. period.28

Absenteeism is also a major factor. Uniformed firefighters have the highest rate overall, at 7 percent; due to the nature of the work, two-thirds of the sick leave is attributable to work-place related injuries. (See Figure 4.)  An analysis by the New York City Independent Budget Office for fiscal year 2016 found that among uniformed FDNY employees, 31 percent used no sick leave, 26 percent were only out for line of duty injury sick leave, and the remaining 43 percent were responsible for all of the routine sick leave.29 Furthermore, the analysis found that the top 10 percent of sick leave users were responsible for nearly 60 percent of the agency’s routine sick leave.

Like the FDNY, much of the staffing at DOC is based on fixed posts.  There are minimum staffing needs at each facility and unit, and a minimum number of officers are needed for functions like inmate transportation to courts, and medical emergencies. While the inmate population has declined substantially in recent years, the City has increased staffing needs to address high rates of violence and maltreatment.30

According to data from DOC, 65 percent of overtime in fiscal year 2017 is scheduled overtime for regular posts.  Other reasons include overtime related to construction work (7 percent), medical transport (5 percent), staff shortage (3 percent), and suicide watch (3 percent).31

Average overtime hours and earnings at DOC were higher than in the other uniformed departments in fiscal year 2016. (See Table 3.) Furthermore, higher ranking uniformed officers generally work more overtime.  Captains and Assistant Deputy Wardens averaged 610 hours of overtime (nearly 12 hours a week), with average overtime pay of $43,000 and $51,000 a year, respectively. While Correction officers work less overtime than supervisors, they still exceed other uniformed titles at 485 hours a year, on average.

Staffing and absenteeism are challenges for the department.  Hiring has not kept up with uniformed vacancies and the department has been expanding its capacity to train new classes of officers.32 Additionally, turnover and dismissal rates are higher than in other uniformed departments.  In fiscal year 2015 7.1 percent of corrections officers left the department (including retirements) compared with rates between 3.3 percent and 4.3 percent for police officers, firefighters, and sanitation workers.33 Data on the reason why employees left shows higher rates of dismissal in DOC than the other uniformed agencies.34 In addition, as Figure 4 shows, uniformed DOC employees have high rates of sick leave usage.  The overall rate is 6.4 percent: LODI-related sick leave is 1.1 percent while routine sick leave is 5.3 percent. 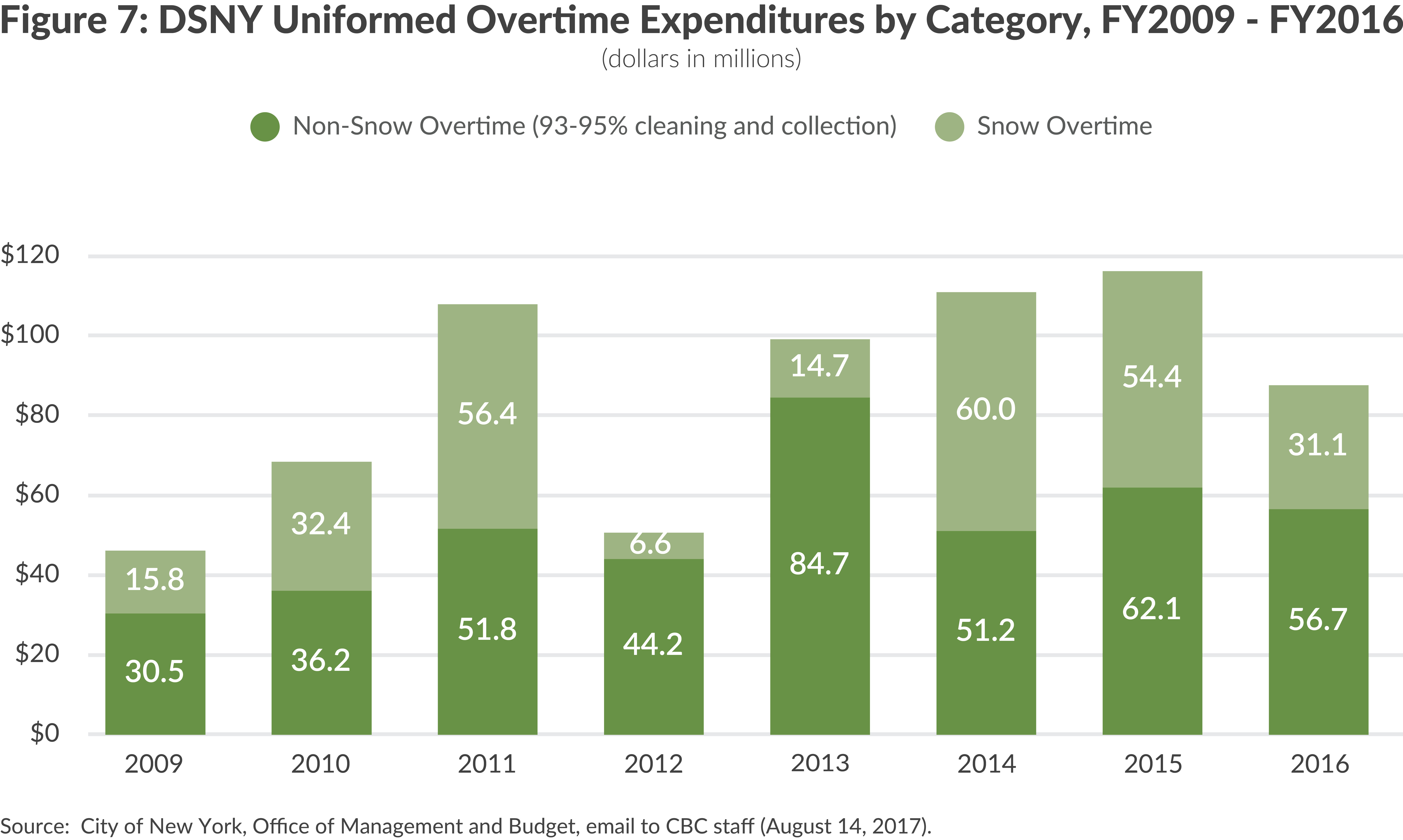 With uniformed overtime continuing to grow and previous efforts to control costs falling short, the City should establish a uniformed labor-management committee as part of the next round of collective bargaining in order to reduce uniformed overtime spending. The City’s recent experience with healthcare savings shows that bringing both sides to the table can be an effective tool to resolve fiscal challenges across a number of agencies.

Employees and their supervisors are in the best position to devise proposals to reduce uniformed overtime. Some ideas that should be considered include:

Uniformed overtime remains a significant fiscal challenge for the City’s budget. If the caps instituted by the de Blasio Administration are to be achieved, more concerted, systemic efforts to directly address the reasons for the high overtime must be made. A labor-management committee should be established to negotiate a set a of work policy reforms to reduce overtime as part of the next round of collective bargaining.