Finding budget savings is a time-honored tradition in New York City government. Under previous mayors, this process took the form of the Program to Eliminate the Gap (PEG), in which agencies were required to meet savings targets. Mayoral proposals were often the subject of controversy and negotiation with the City Council, particularly in the final years of the Bloomberg Administration.

Mayor de Blasio’s approach differed from PEGs in two ways: (1) agency participation was voluntary; and (2) there were no savings targets participating agencies were required to meet.

This analysis compares the CSP in the recently released Preliminary Budget for Fiscal Year 2019 and Mayor de Blasio’s two previous Preliminary Budget CSPs to the PEGs in Mayor Michael Bloomberg’s three final preliminary budgets, released in 2011, 2012, and 2013. This comparison is appropriate because it spans a period of economic growth in New York City that began in 2010. 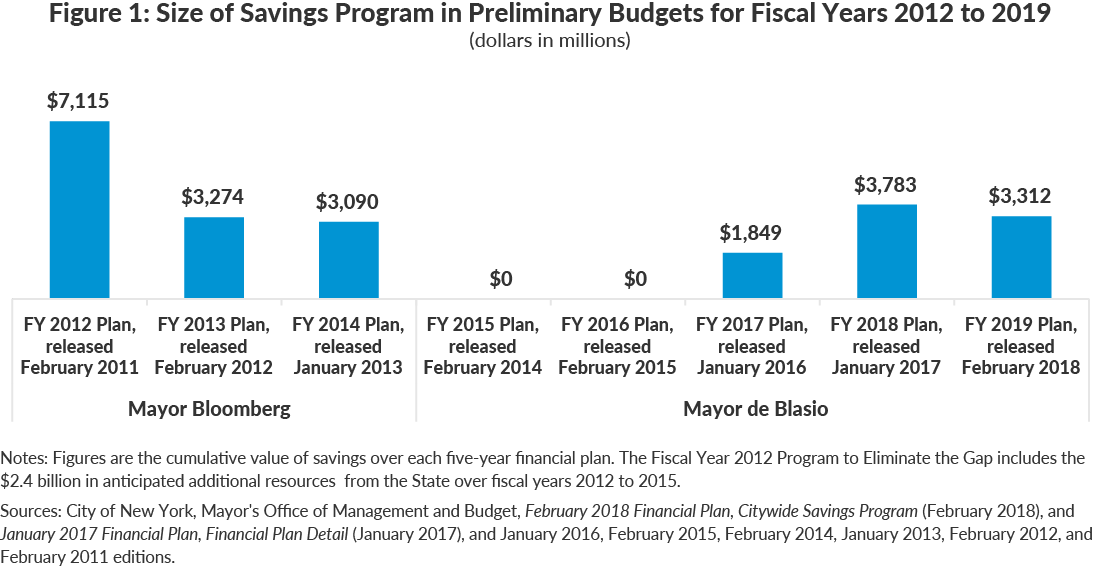 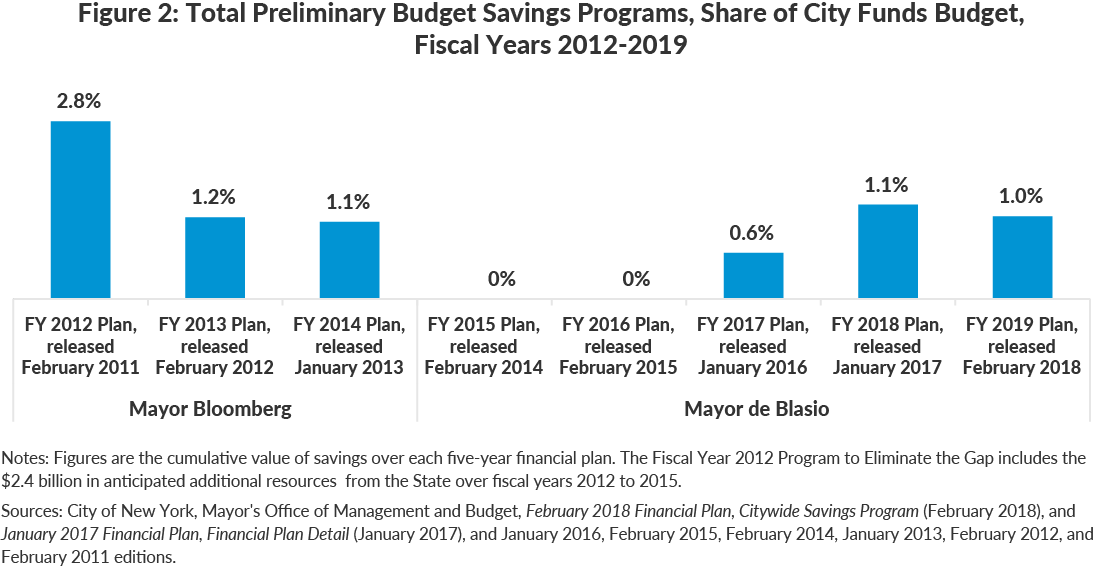 Savings initiatives have been grouped by CBC staff into four broad categories: 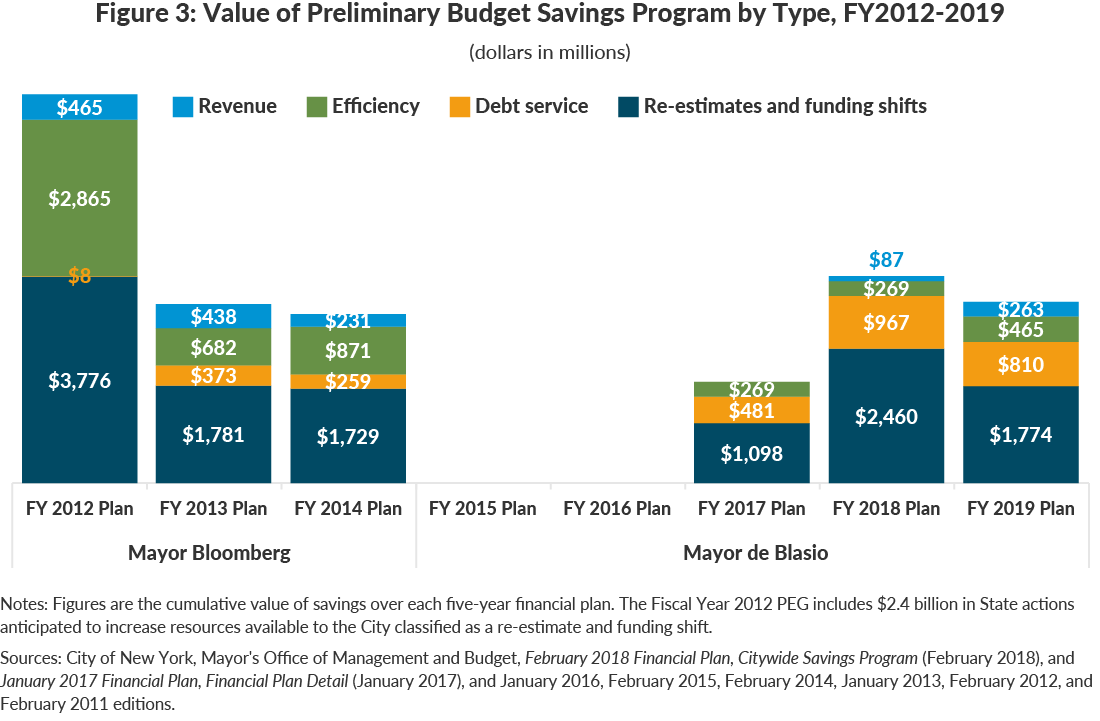 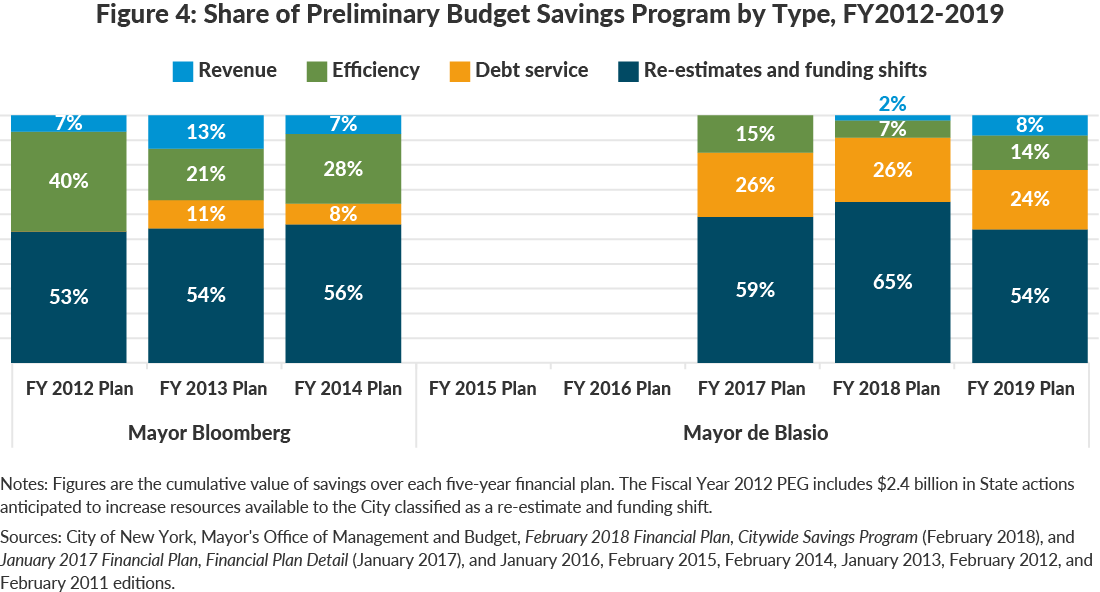 Efficiency savings were 21 percent and 28 percent in the Fiscal Years 2013 and 2014 PEGs, respectively, compared to 7 percent to 15 percent of total savings in the CSPs.10

Tables 1 and 2 show agency efficiency savings in the CSPs are smaller in dollar terms and as a share of the agencies' city-funded budgets than in PEGs. Exceptions include the Department of Correction (DOC) in the Fiscal Year 2019 CSP and the Department of Homeless Services (DHS) in the Fiscal Year 2017 CSP, where the savings are related to policy changes.8 Figure 5 shows efficiency savings contributed by each group of agencies as a share of those agencies’ city-funded budgets. In each category, efficiency savings rates are lower in CSPs than in PEGs.

Mayor de Blasio established a Citywide Savings Unit within the Office of Management and Budget to find savings across agencies beginning in November 2016. Citywide initiatives first appeared in the November 2016 Financial Plan and included efforts to better manage procurement, space occupied by City agencies, and overtime. Citywide initiatives have supplemented agency endeavors and increased total efficiency savings significantly in the Fiscal Year 2018 CSP; however, the magnitude of savings is still significantly below the level and rate of efficiency savings in the PEGs. 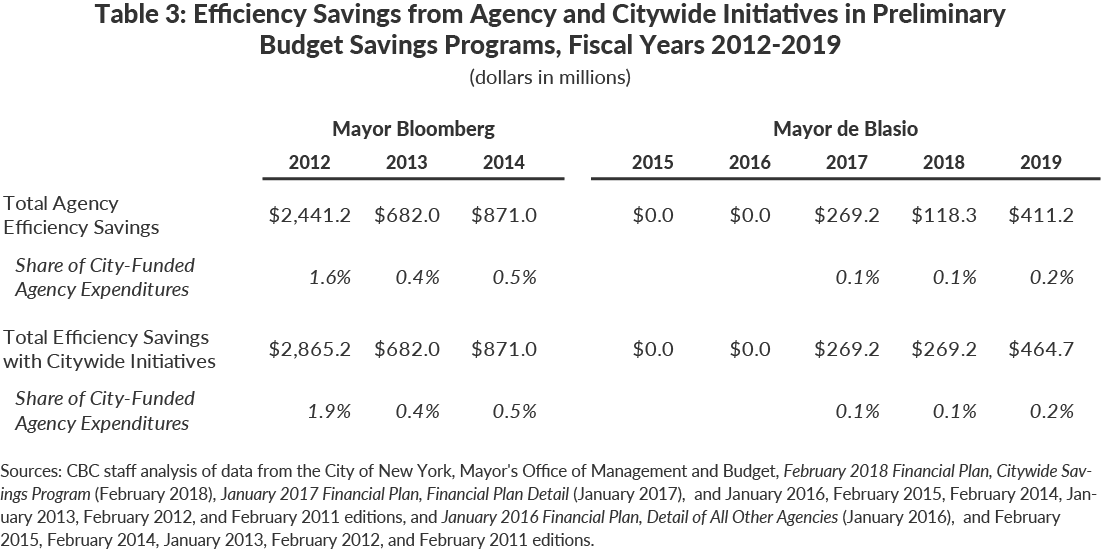 The aim of the CSP should be not only to offset the cost of new needs, but also to balance the growing costs of personnel and bolster the City against possible risks to the budget. Going forward, the Mayor’s savings plans should focus more on efficiency savings across all agencies.

If the de Blasio administration had found efficiency savings equal to the minimum PEG level achieved, 0.3 percent of the city funds budget, an additional $2.0 billion in savings would have been achieved in CSPs for fiscal years 2017 to 2019. If these savings had also been made in the prior two years, when there was no CSP in the preliminary budget, an additional $1.7 billion could have been saved.

Mayor de Blasio has said the Executive Budget for Fiscal Year 2019 will contain an additional $500 million in savings over the first two years of the financial plan. This target should be raised and achieved with efficiency initiatives.