Personal income tax (PIT) revenues play a large role in the finances of both New York State and New York City. High-income earners generate an outsized portion of PIT revenue, making this revenue stream particularly volatile since high-income earners earn a significant portion of their income from capital gains, which are especially sensitive to economic trends.

New York State’s PIT raised $47.1 billion in state fiscal year 2015-2016—30.7 percent of all revenue and nearly two-thirds of tax receipts.1 (See Figure 1.) This makes PIT the leading source of tax revenue, and second only to federal receipts among all revenue sources. PIT revenue accounts for nearly half of total state operating funds, which pay for services including education, public health, transportation, and public safety.2

The State’s PIT revenues are highly dependent on the top earners. New York taxpayers with taxable income of $1 million or more accounted for just 1.0 percent of all filers in tax year 2016. However, they accounted for 37.0 percent of total PIT liability—a collective $15.7 billion, or about one out of every six state operating funds dollars.3 (See Figure 2.) This yield is the result of both the State’s permanent top marginal tax rate plus a "temporary" surcharge on higher earners first enacted in 2009 and recently extended through 2024.4 The average State resident earning $1 million or more paid $275,600 in 2016.5 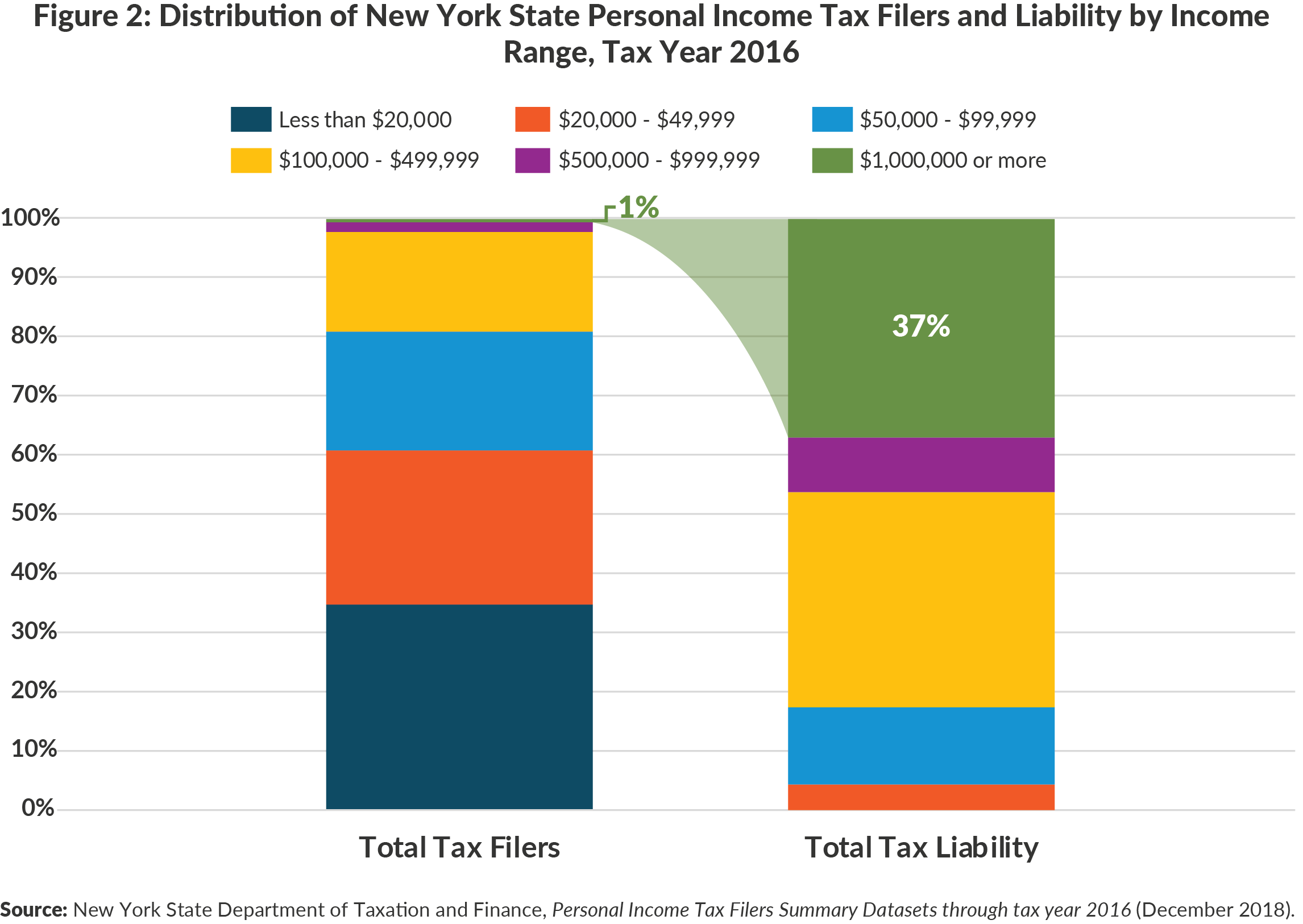 Due to the reliance of high-income filers NYS PIT revenue is volatile and reflective of economic conditions. Between fiscal years 2007 and 2016 the annual change in PIT revenue exceeded 10 percent in three years and exceeded 4 percent more often than not. Revenues from all other taxes experienced annual changes exceeding 4 percent only twice over the same period.6 (See Figure 3.)

This volatility can have significant budgetary implications in any given year. For example, in fiscal year 2008 PIT revenue increased $4.2 billion; the following year, it declined by $5.7 billion. 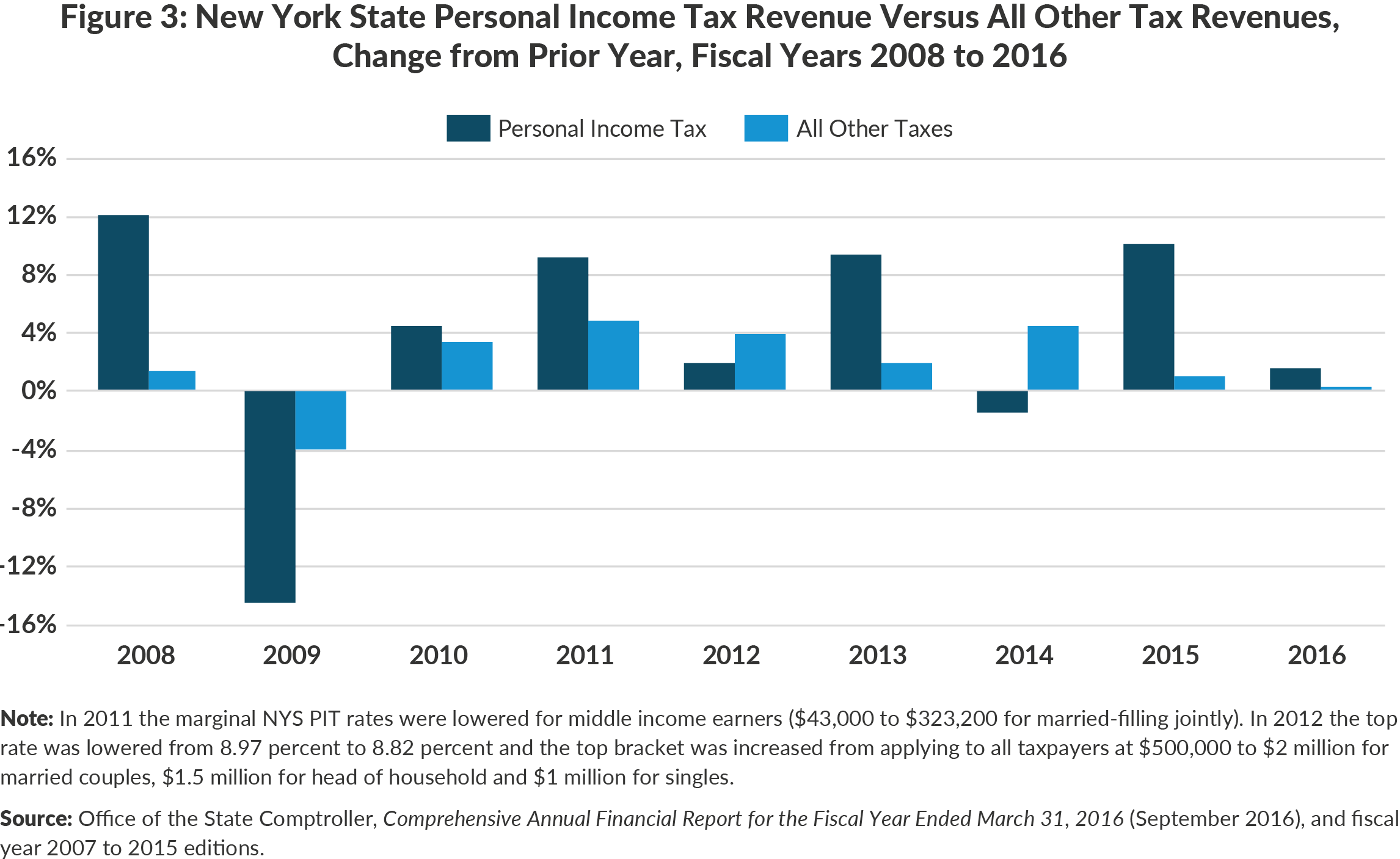 PIT volatility is attributable largely to the volatility of capital gains—a major source of income for top earners. (See Figure 4.) Net capital gains ranged from 21 percent to 44 percent of income for filers with income of $1 million or more between 2007 and 2016.7 The annual change in net capital gains swings substantially, having increased or decreased by more than 20 percent in 6 of 10 recent years.8

As a result, top earners, who earned 72.2 percent of all taxable net capital gains in 2016, drive PIT volatility.9 In 2008 PIT liability for filers earning more $1 million or more fell by 25.8 percent from the prior year (along with a 54.4 percent decrease in net capital gains), while PIT liability of all other earners fell by just 0.4 percent. In the decade since, the tax liability of New Yorkers earning less than $1 million has grown at a relatively constant rate, while the liability of top earners has fluctuated, often posting annual increases or decreases in excess of 10 percent.10

Many top earners are not New York State residents

Non-residents are subject to the New York State PIT for property, businesses, trusts, and other income-generating activities located in the state. Additionally, those living in the state for only part of the year pay PIT for income earned as residents.11

Non-resident taxpayers are generally higher-income: 5.3 percent of non-residents earned $1 million or more in 2016, while the same was true for just 0.5 percent of full-year residents. Nevertheless, residents pay a majority of taxes in every income class. Although fewer than half of top earners were full-year residents, residents comprised 81 percent of their income group’s PIT liability. Non-resident high-income earners in aggregate have low New York liability relative to their total income because income range classifications are based on total income earned regardless of how much income is taxable in New York. This increases the importance high-income filers living in the State for PIT revenues.12 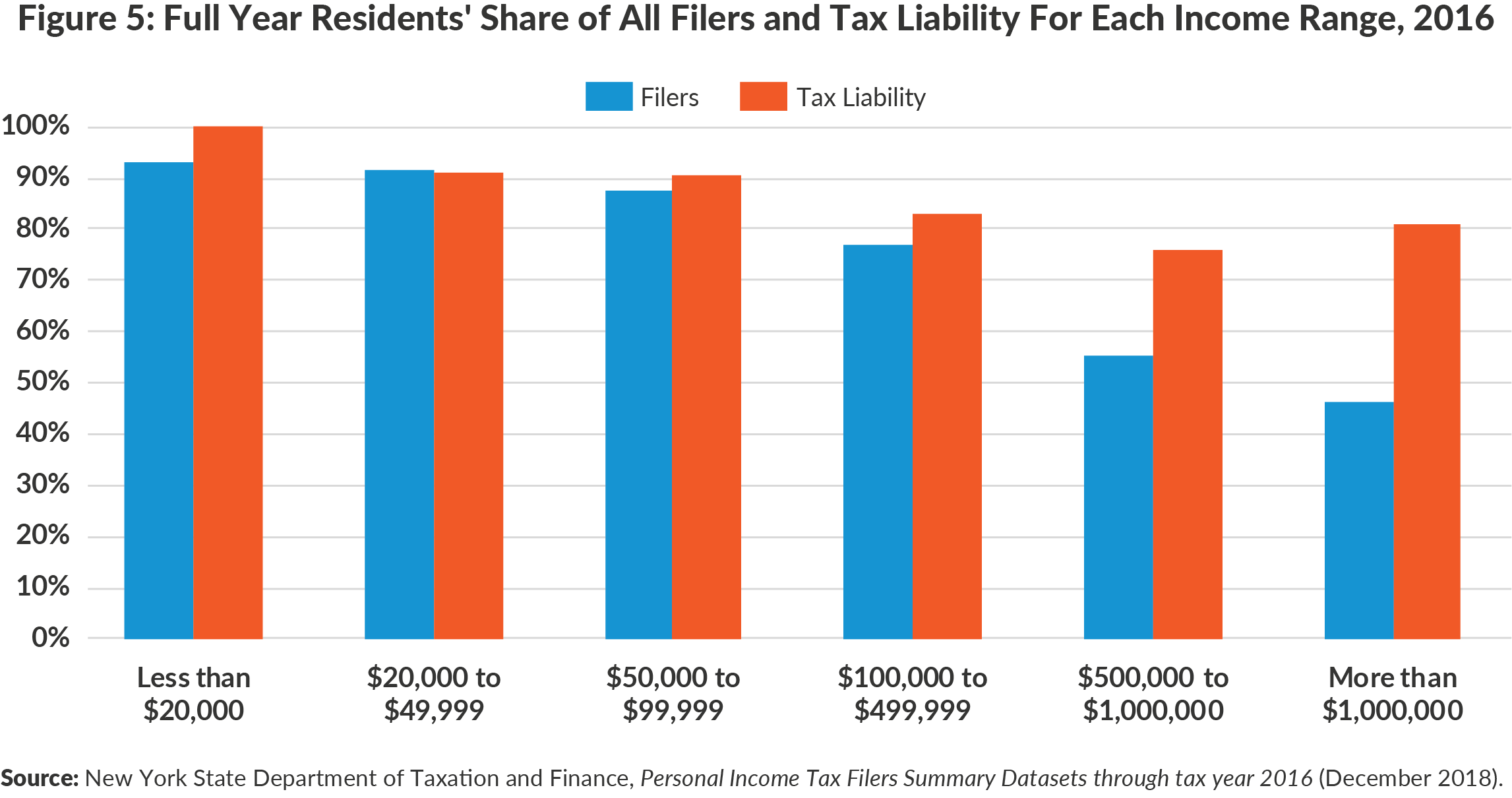 The City relies on the PIT, but less so than the State

Since city income is highly concentrated at the top of the distribution, high earners account for a significant portion of total PIT liability. Tax filers earning $1 million or more represent 0.7 percent of all filers and those filers account for 38.9 percent of total PIT liability, according to data compiled by the New York City Independent Budget Office. (See Figure 7). The average filer who earned $1 million or more paid $146,000 of PIT in 2016. The $3.7 billion in PIT revenue from high-income filers was 6.4 percent of City-funded spending in fiscal year 2016.14

PIT revenues are more volatile than other tax revenues

Between fiscal years 2007 and 2016 annual change in PIT revenue exceeded those of other taxes in all but three years.15 (See Figure 8.) This volatility has implications for the budget. In fiscal year 2009 PIT collections decreased by $2.3 billion following an increase of $1.3 billion in fiscal year 2008.

High earners’ variable income is a source of volatility

Capital gains—which comprised 28.6 percent of the income of filers with $1 million or more in income in tax year 2016—drive volatility in the City’s top income brackets. (See Figure 9.) The trajectory of capital gains between 2007 and 2016 mirrored the State's, with annual change greater than 30 percent occurring in six of the years and outpacing annual change of all other income in every year but one.16 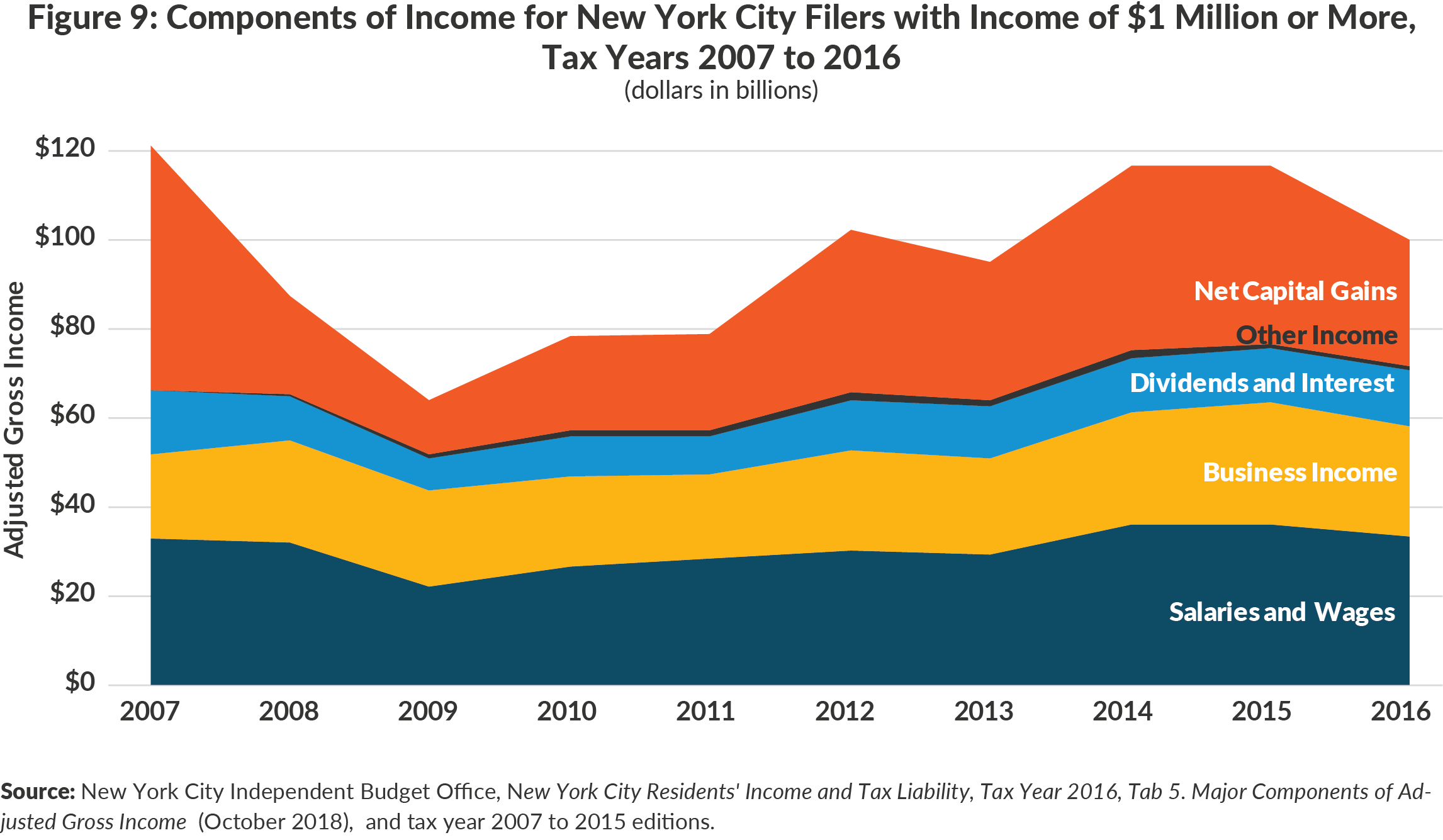