On Tuesday January 22 Governor Cuomo submitted his fiscal year 2013-14 Executive Budget to the legislature, including a proposal for the amount and distribution of school aid to New York’s 676 school districts. Total school aid would increase by $889 million, or 4.4 percent, from $20.2 billion in school year 2012-13 to $21.1 billion in school year 2013-14. The major components of the increase are $611 million in formula and categorical  aid, $203 million for what the Governor has called a one-time  “fiscal stabilization fund” and $75 million in new competitive grant  programs. (See Table 1.) 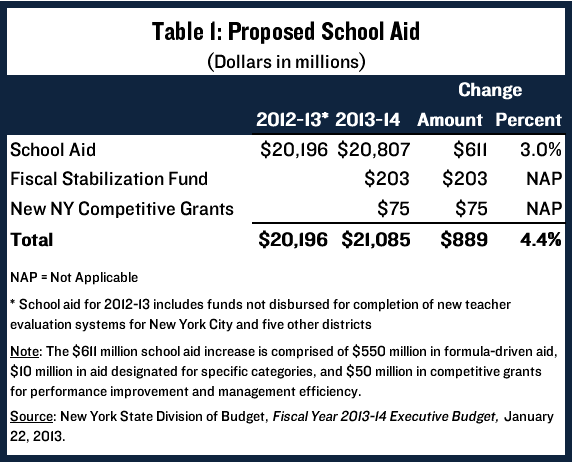 The $611 million increase in formula and categorical aid is compliant with the state aid growth cap tied to personal income growth adopted two years ago (3 percent this year). Above the cap the budget calls for an additional $203 million for “fiscal stabilization,” although the  legislation does not define the term and indicates only that the distribution of the funds would be determined in the course of adopting the budget, and $75 million in new competitive grant programs. The new grants would fund the recommendations of the New NY Education Reform Commission including $25 million for  full-day pre-kindergarten, $20 million for extended learning time, $15 million for community schools, $11 million to reward high performing teachers, and $4 million for early college high school programs.

Most of the $611 million increase, $550 million, would be allocated through school aid formulas for foundation and expense-driven categorical aids; $10 million would be available for a small number of specific types of aid such as teacher recruitment, and $50 million would be  allocated to fully fund competitive grant programs for performance improvement and managerial efficiency that began in prior years.