Rent regulation laws applicable to New York City are due to sunset in June 2019, and their renewal will be a top priority in the legislative session. New York is a city of renters, and rent regulated units account for nearly half of the city’s rental housing stock.

The Governor’s budget message includes a proposal to extend rent regulation, contingent on reforms intended to strengthen protections against increasing rents and the loss of units. Legislators and some stakeholders have proposed additional reforms that would expand the scope of rent regulation and address other provisions that affect rent increases. However, these proposals would exacerbate many of rent regulation’s flaws and will not make a meaningful impact on the affordability of rental housing in New York City. Instead, they will further benefit upper-income renters without providing relief to the low-income households most likely to be rent burdened. Moreover, the reforms will do little to address concerns about the relatively poor physical condition and maintenance of rent-stabilized buildings and may aggravate these problems.

Any reforms included with the renewal of rent regulation should focus on better targeting its protections to the most rent burdened. One way to serve this goal would be to eliminate rent stabilization for upper-income households who earn more than $200,000 per year, restoring as many as 28,000 units to market-rate status, which would boost property values, increase property tax revenue, and give the City additional resources to invest in better-targeted housing programs. Any reforms to capital improvement allowances should provide some incentive for owners of stabilized buildings to maintain the condition of their units.

Rent regulation applies to rental units in buildings of six or more units built before January 1, 1974, as well as units that are subject to regulatory agreements with the City or State.1 In 2017, 988,192 apartments were subject to rent regulation, including 966,441 rent-stabilized units and 21,751 rent controlled units. Together rent-stabilized and controlled units make up 45 percent of the city’s rental housing stock.2 (See Figure 1 and the methodological note below.) 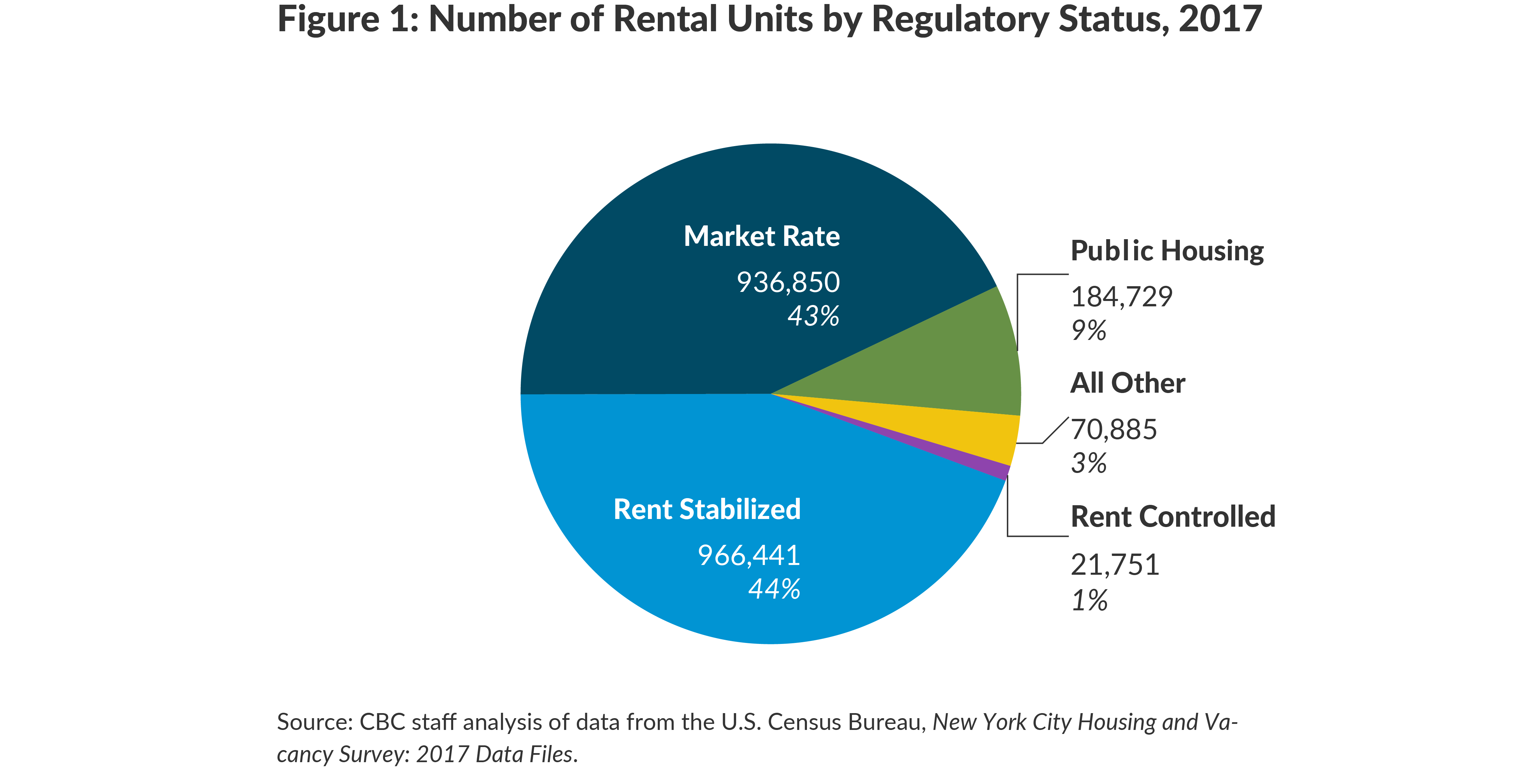 State law provides rent regulated tenants with the right to renew their leases with rent increases capped at rates determined by the Rent Guidelines Board (RGB).3 If a tenant’s current rent is less than the maximum amount an owner is permitted to charge, known as a “preferential rent,” increases are not strictly capped but cannot rise to a level that exceeds the maximum legal rent, which continues to increase based on the RGB guidelines.

Property owners also are permitted to increase an apartment’s legal rent to reflect the cost of buildingwide capital improvements and upgrades to individual apartments, called Major Capital Improvements (MCIs) and Individual Apartment Improvements (IAIs), respectively. When a rent-stabilized unit is vacated, the property owner also may increase the legal rent with a one-time “vacancy allowance” of up to 20 percent.

Units may be deregulated under certain conditions. The most common method, known as high-rent vacancy decontrol, allows owners to deregulate a unit if its legal rent, including allowable increases, exceeds a statutorily set threshold, currently $2,774.76, upon vacancy. This provision was added in 1993, and the threshold has been changed periodically; in 2015, the Legislature increased the threshold to $2,700 and indexed it to annual one-year RGB increases as part of the renewal of rent regulation.  Other less frequently used ways that units can be decontrolled include conversions to condominiums or cooperatives (co-ops) and high-income/high-rent decontrol, which affects households who earn at least $200,000 for two consecutive years and have a legal rent that exceeds the decontrol threshold.4

Why the proposed reforms would exacerbate rent regulation’s shortcomings

Governor Cuomo and several State legislators have announced support for changes to rent regulation statutes that would limit the ability to increase rents beyond the annual increases authorized by the RGB and curtail the ability to remove units from the rent regulation system. Two proposals included in the Governor’s Executive Budget are ending high-rent vacancy decontrol and placing unspecified limitations on the MCI and IAI capital improvement allowances.

The goal of these proposals is to maintain the number of units under rent regulation; however, they would not address the limitations of the City’s rent regulation system and would make it less effective in three ways.

In 2017 upper-income households occupied 12 percent of pre-1974 rent-stabilized units, or 98,780 units. (Upper-income households earn more than 165 percent of Area Median Income (AMI). See Figure 2 for the distribution of rent-stabilized households by income group and the Appendix for the definitions of income groups used in this report. The analysis is based on the income limits in place at the time of the 2017 HVS.) 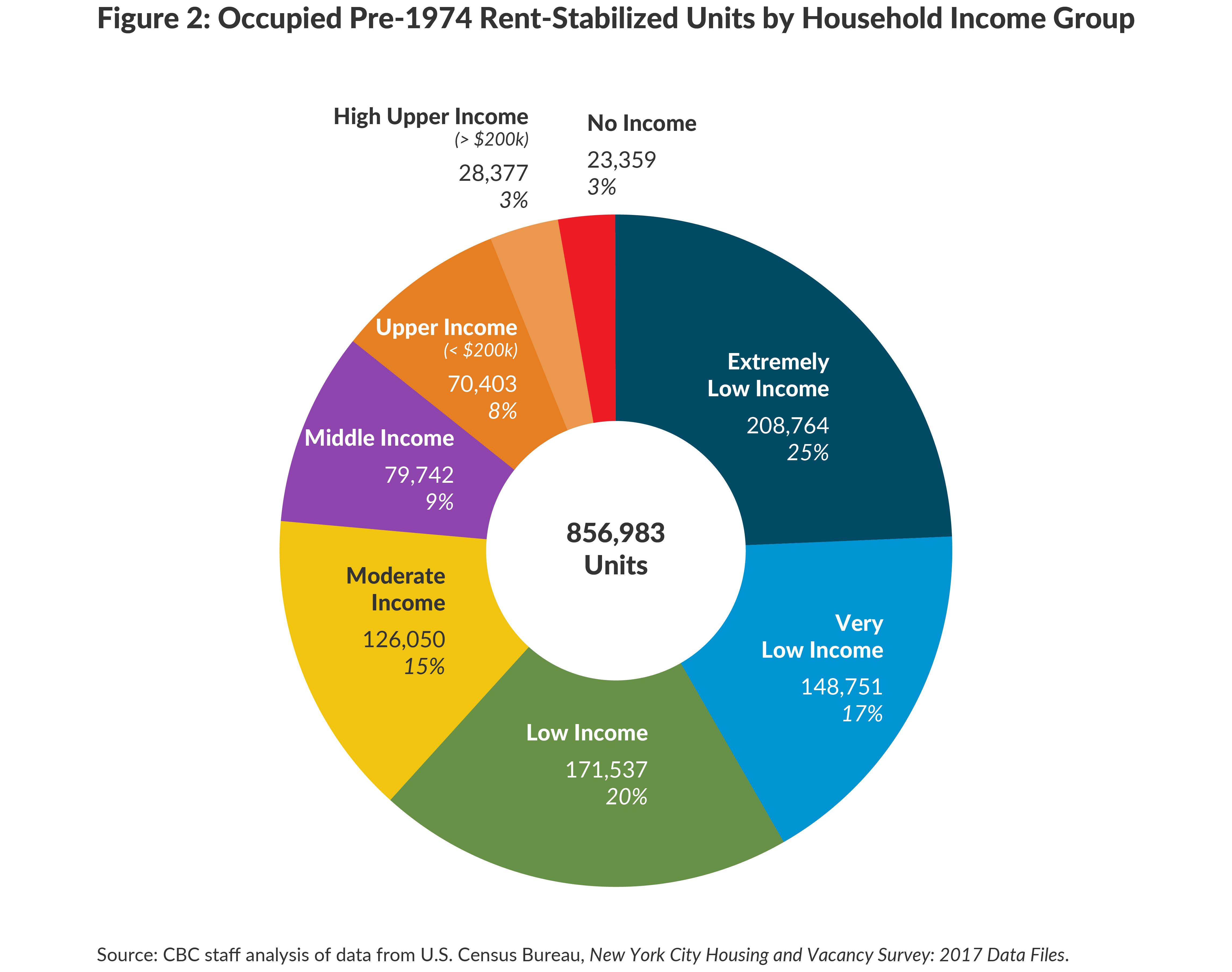 Rent-stabilized households who earn more than $200,000 and live in below market-rate units pay a total of $271 million less annually than the average cost of an unregulated unit of the same size in a similarly priced neighborhood, an average savings of $13,764 per household per year.6

Ending high-rent vacancy decontrol will disproportionately benefit higher-income households. Upon vacancy these units will continue to be stabilized and most likely will be rented by households of similar economic status. Over the last three years, middle- and upper- income households have accounted for 60 percent of households who moved into stabilized units with rents of $2,000 or more per month. Meanwhile, current high-income tenants in regulated units will realize even greater savings in future years if market rents continue to grow faster than RGB increases.

2. Ending high-rent vacancy decontrol will not increase the number of affordable units.

Apartments that rent at the current decontrol threshold are considered affordable for households earning at least $111,000 annually.Maintaining units at those rent levels will not provide affordable housing for low-income households, who disproportionately suffer from severe housing burdens. For a unit to be affordable to low-income households of three, defined as 80 percent of AMI or less, the rent must be below $1,600, a level that is far below the decontrol threshold of $2,774.76.7

Most stabilized units are unaffordable to the lowest-income households without additional assistance. In 2017 more than 75 percent of rent regulated tenants who earn less than 80 percent of AMI and did not receive Section 8 vouchers or another form of housing assistance were rent burdened–approximately the same rate as similar tenants in market-rate units. (See Figures 3 and 4.) Section 8 vouchers, funded by the federal government and administered by local housing agencies, cap tenant responsibility for rent at 30 percent of income.

3. Restricting the capital improvement allowances will not improve the physical condition of rent-stabilized units.

The MCI and IAI provisions were intended to encourage property owners to maintain buildings and invest in needed capital improvements. Lessening that incentive could result in less investment by landlords in the quality of their buildings. Critics contend that owners use MCIs and IAIs to increase legal rents toward the decontrol threshold instead of for their intended purpose. Limiting the usefulness of the capital improvement allowances, however, could exacerbate the existing gap in quality between stabilized and market-rate rental units.

At best rent regulation is only one component of an affordable housing strategy. Lower-income households benefit from availability of units that rent for less than market rates, which often help lessen otherwise severe rent burdens. The right to lease renewals offers security of tenure and promotes housing stability. Rent-stabilized units also make up a disproportionate share of units that meet the eligibility rules of local and federal rental housing voucher programs. For low-income households, however, most rent-stabilized units are only affordable with additional assistance.

Many of the reforms likely to be introduced this session would exacerbate the shortcomings of rent regulation. Ending high-rent vacancy decontrol would lock in below-market rents for upper-income households, while limiting capital improvement allowances could discourage property owners from reinvesting in rent-stabilized buildings.

At a minimum, any reform measures should not exacerbate current problems. Ideally, reform measures should make rent regulation better targeted to lower-income, rent-burdened households. One way to achieve this would be to eliminate rent stabilization for upper-income households who earn more than $200,000 per year. This may restore more than 28,000 units to market-rate status, which would boost property values, increase property tax revenue, and give the City additional resources to invest in better-targeted housing programs.8 Reforms to capital improvement allowances also should provide an incentive for owners of stabilized buildings to maintain their portfolios.