As of the Preliminary Budget for Fiscal Year 2018, the de Blasio Administration has identified $3.8 billion in savings to be achieved in fiscal years 2017 to 2021. However, just 9.7 percent of these savings come from improving the efficiency of government operations. Citing uncertainty in the economy and the policies of the federal government, the Office of Management and Budget has committed to finding $500 million in additional savings to be included in the Executive Budget in April. To serve as a meaningful hedge against budget risks, all of this amount should come from improving government productivity in ways that generate recurring savings.

The actions taken by the City over the five-year financial plan to reduce city-funded spending are known as the Citywide Savings Program (CSP). The November 2016 budget modifications included $1.7 billion in savings, and the Preliminary Budget for Fiscal Year 2018, released in January, included $2.1 billion in additional savings for a total of $3.8 billion, which represents 1.1 percent of city-funded expenditures.

Like previous savings plans under Mayor Bill de Blasio, the CSP relies heavily on debt service savings and re-estimates of expenses; as a result, savings are frontloaded and decrease over time. As shown in Figure 1, $1.2 billion, or 32 percent, of savings are in the current fiscal year. Another $900 million, or 24 percent, will occur in fiscal year 2018, with only 45 percent of the total savings occurring in the final three years of the plan.1 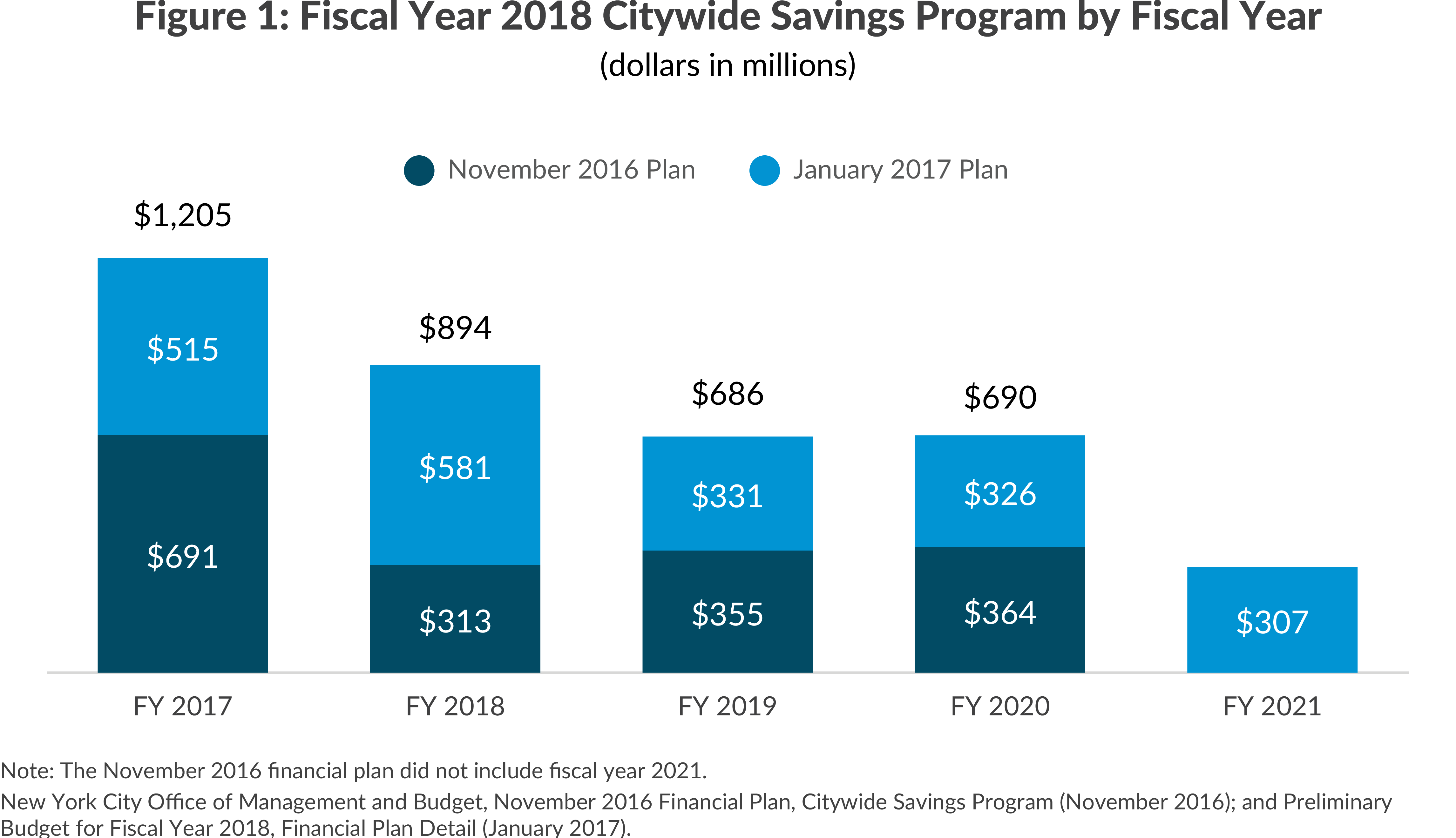 Nearly two-thirds of total savings are due to re-estimates and funding shifts (See Table 1). This includes re-estimates or substitution of state and federal funds (meaning the City expects greater reimbursement to offset the use of city funds), as well as re-estimates of city expenditures due to changes in contract costs, implementation delays, and savings from vacant positions.2

Debt service savings are $960 million, or 26 percent, of the total CSP, primarily from lower than planned interest rates on city debt. In addition, the City no longer plans to do any short-term borrowing, saving $75 million annually.

Efficiency savings are negligible: they comprise only $366 million, or less than 10 percent of the CSP.3 Only 22 of the 44 agencies participating in the CSP contributed any efficiency savings. Forty percent ($151 million of $366 million) come from initiatives identified by OMB’s new Savings Unit, which is tasked with identifying efficiency initiatives that cut across agencies, and has so far has identified initiatives that will provide recurring savings of $47 million by fiscal year 2020. These initiatives include overtime controls for skilled trades and civilian workers, increased vehicle-sharing, and reverse auctions to drive down prices for procurement of bulk goods.

The creation of a Savings Unit is a positive step; however, it should not absolve city agencies of responsibility for initiating their own efforts to operate more efficiently. Agencies should be required to identify efficiency improvements to generate the next $500 million in savings promised by the Administration; this would still represent less than 1 percent of City-funded annual spending.