Seven Facts About the NYPD Budget

1. About $11 billion from the City’s budget are allocated to the NYPD.

In fiscal year 2020 New York City’s expenses for the New York City Police Department (NYPD) will total $10.9 billion, comprised of the $5.6 billion NYPD operating budget and $5.3 billion of costs “centrally allocated,” including $2.3 billion for fringe benefits, $2.8 billion for pensions, and $215 million for debt service. (See Figure 1.) Centrally allocated costs for the NYPD are particularly high since uniformed health insurance and pension benefits are more generous than for other City employees. 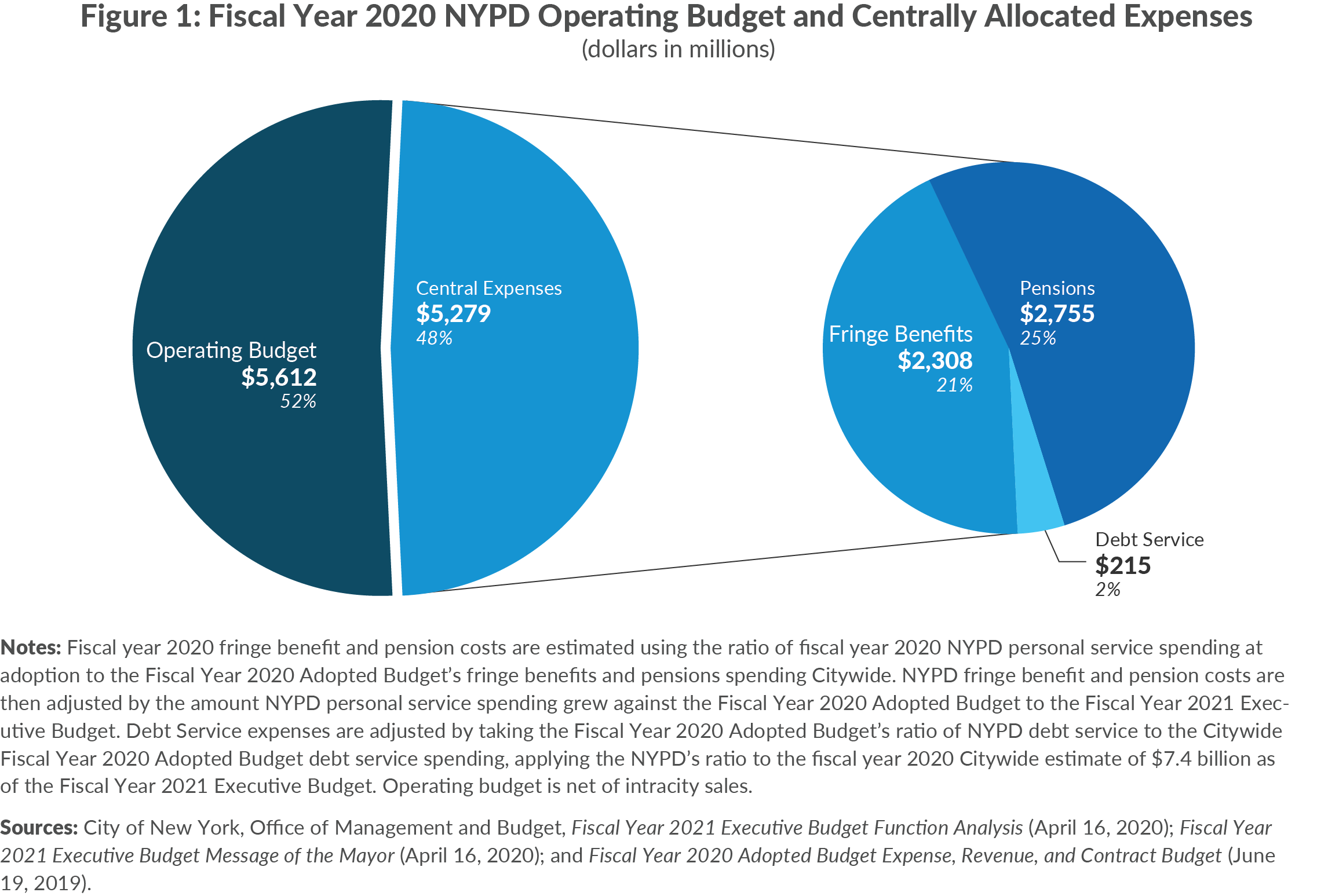 2. The NYPD has the third largest agency operating budget.

The NYPD’s operating budget is 5.7 percent of the City’s $97.8 billion budget, with only the Departments of Education (DOE) and Social Services (DSS) commanding a larger share of resources.1 (See Figure 2.) Excluding the City’s $5.9 billion in required Medicaid payments, the DSS budget would be $4.4 billion, moving the NYPD up to second place.2 Including centrally allocated expenses, the $10.9 billion spent on the NYPD equals 11.1 percent of the total City budget.

3. Most of the NYPD budget is for salaries and wages, and the largest share funds street patrol.

Spending on personal service (salaries and wages, including overtime) is 88 percent of the NYPD’s budget, with other than personal service spending (including items such as contract costs, operating expenses for equipment, and vehicle maintenance costs) consuming the remaining 12 percent.3 These figures exclude capital spending, which includes vehicle purchases among other items.

Funding Sources of the NYPD Budget

Most of the NYPD’s budget is funded by City tax dollars:

The NYPD’s budget is allocated to functions roughly corresponding to the agency’s bureaus and offices. The largest share of the operating budget, 27 percent, is for patrol and general emergency response. Administration and communications is the second largest function representing 17 percent of the budget, and includes administrative employees and 9-1-1 operators. Thirteen percent of the budget supports the Chief of Department to direct daily operations and coordinate between the NYPD’s bureaus. The Chief of Department budget also contains most of the NYPD’s overtime and additional gross pay (such as differentials and holiday pay). In fiscal year 2020 overtime spending at the NYPD totaled $635 million, or 44 percent of all overtime spending Citywide.4  (See Figure 3.) 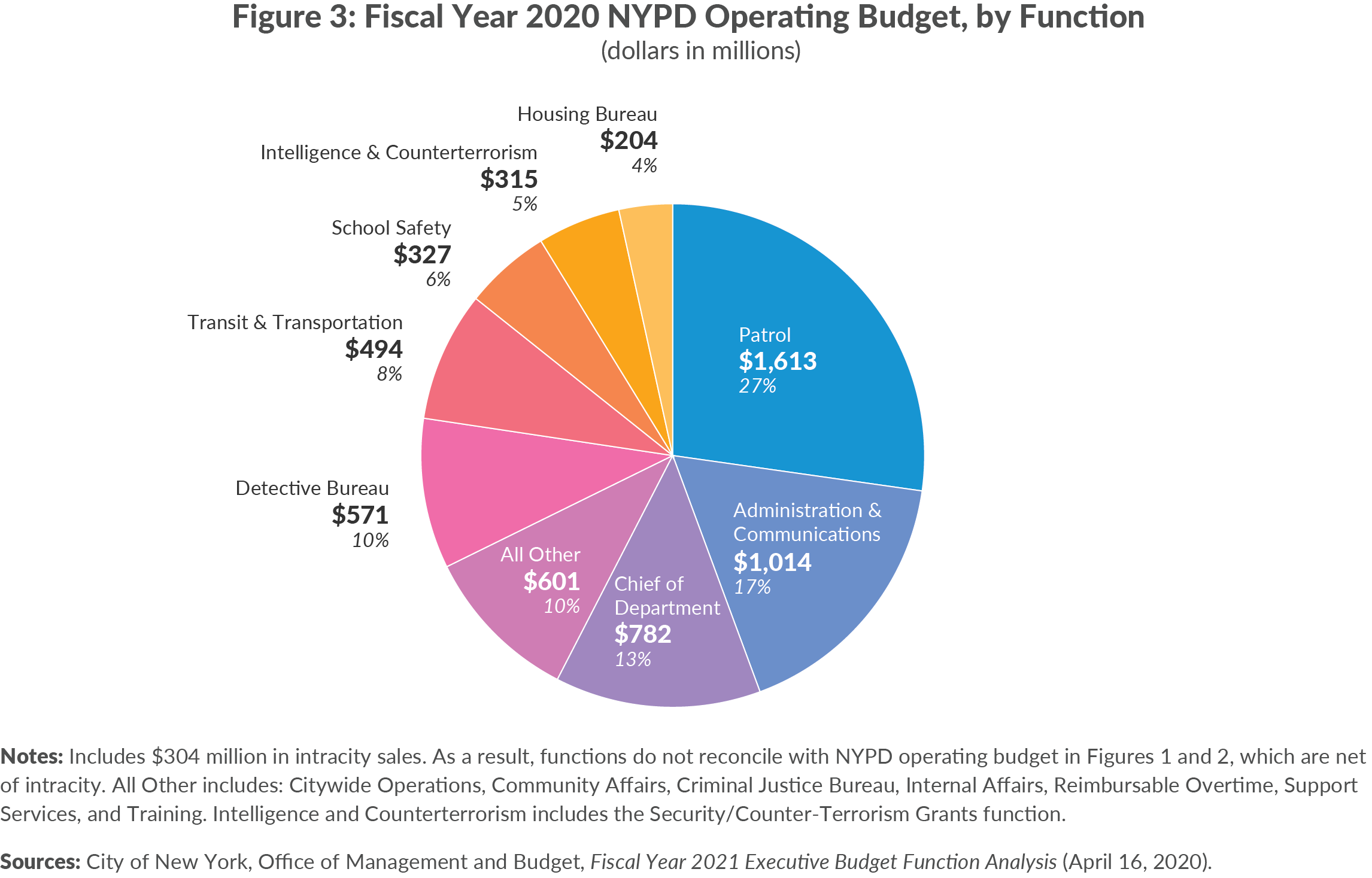 4. About one-third of NYPD employees are civilians.

The NYPD fiscal year 2020 headcount is 54,003 employees. Of those, 36,178 are uniformed employees and 17,825 are civilian employees. In addition to administrative positions, civilian employees include 9-1-1 call responders, school safety agents, and transportation enforcement agents. (See Figure 4.) 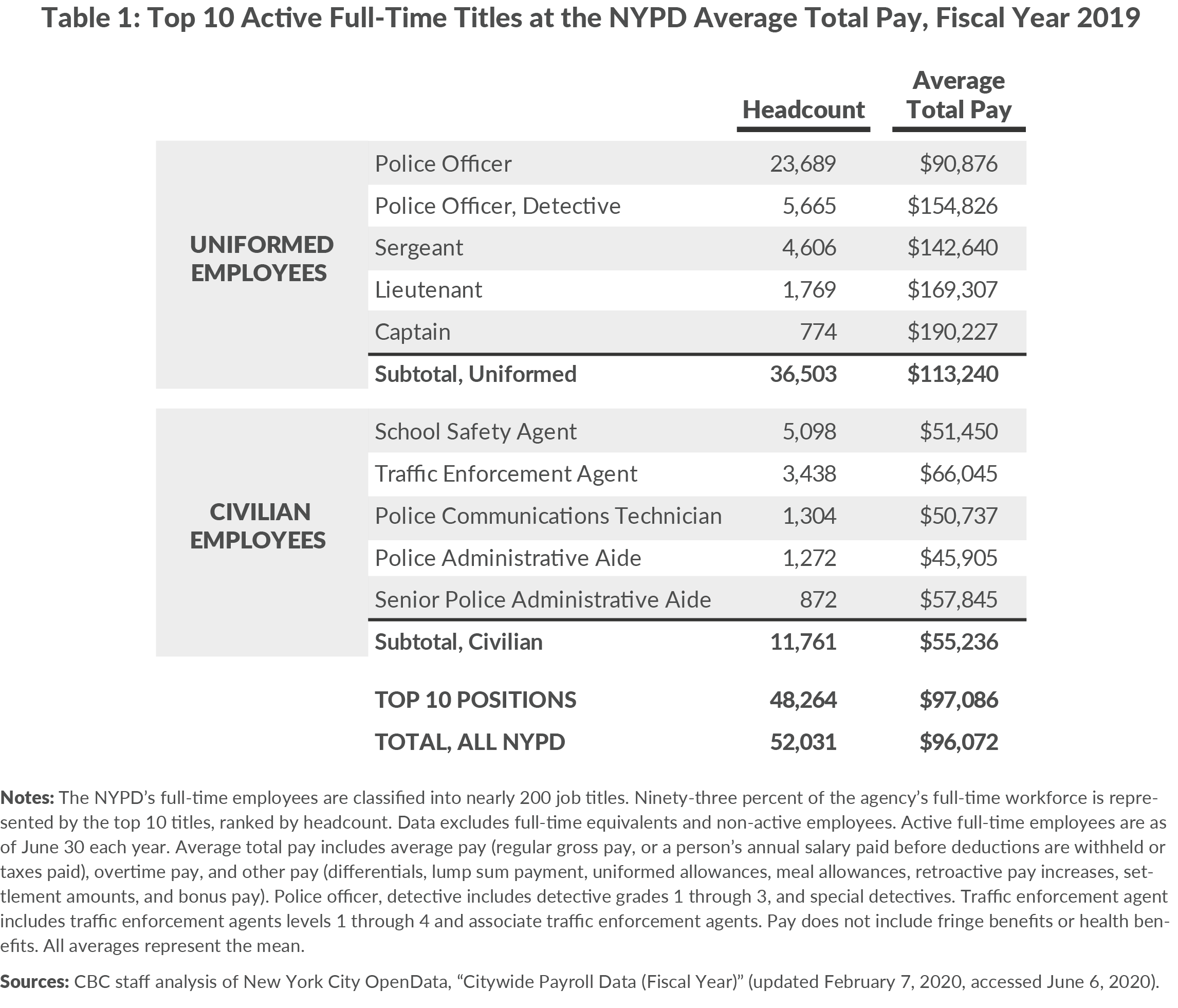 6. The NYPD budget has grown by one-third since fiscal year 2010.

From fiscal year 2010 to 2020 the NYPD’s operating budget grew $1.2 billion, an increase of 27 percent, or 2.7 percent annually. This is slower than the 5.1 percent total City budget annual growth rate.5 Centrally allocated expenses for the NYPD grew $1.6 billion, bringing the total increase in City spending on the NYPD to $2.8 billion, or 34 percent, between fiscal years 2010 and 2020. 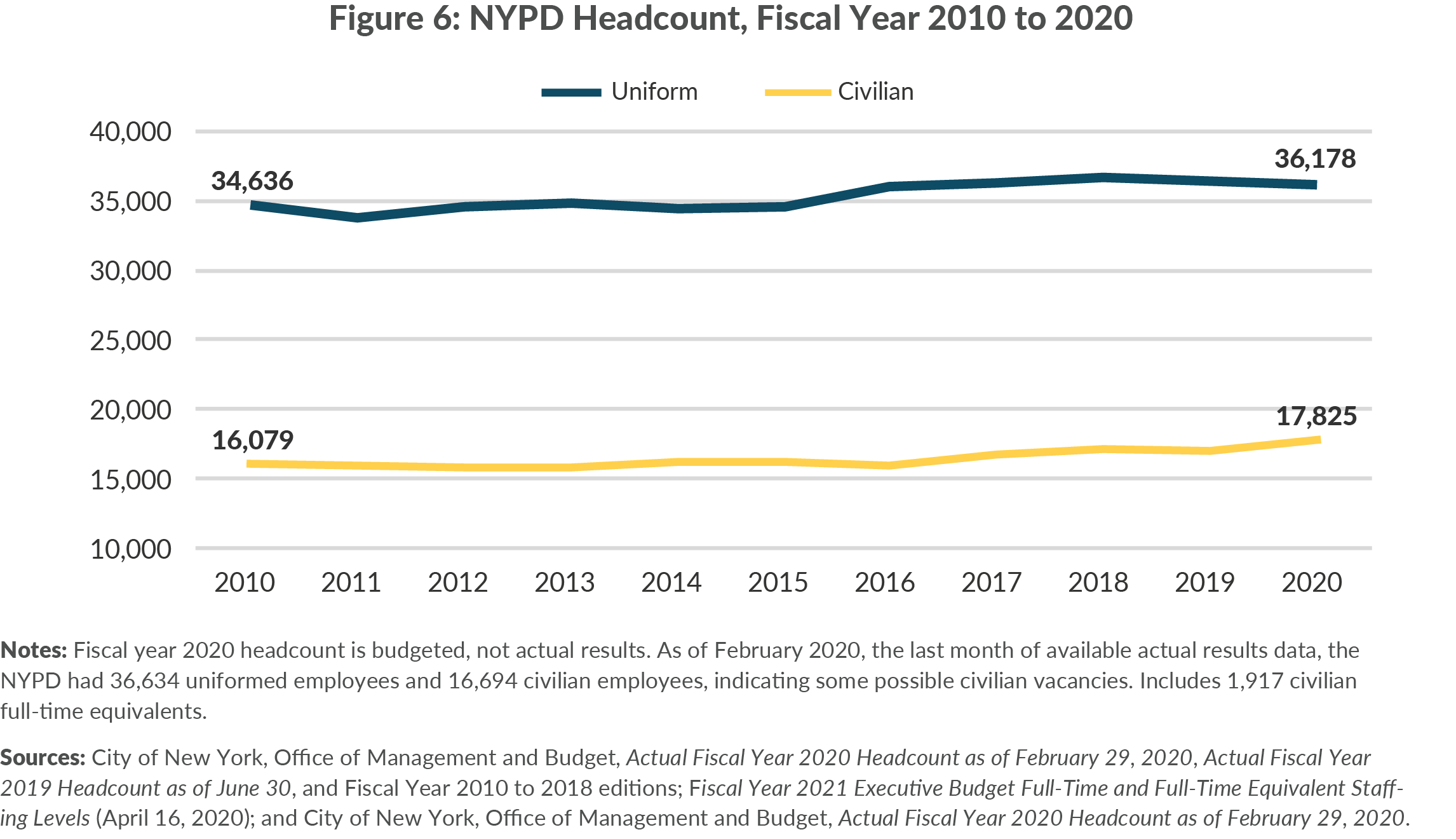 Seven Facts About the NYPD Budget 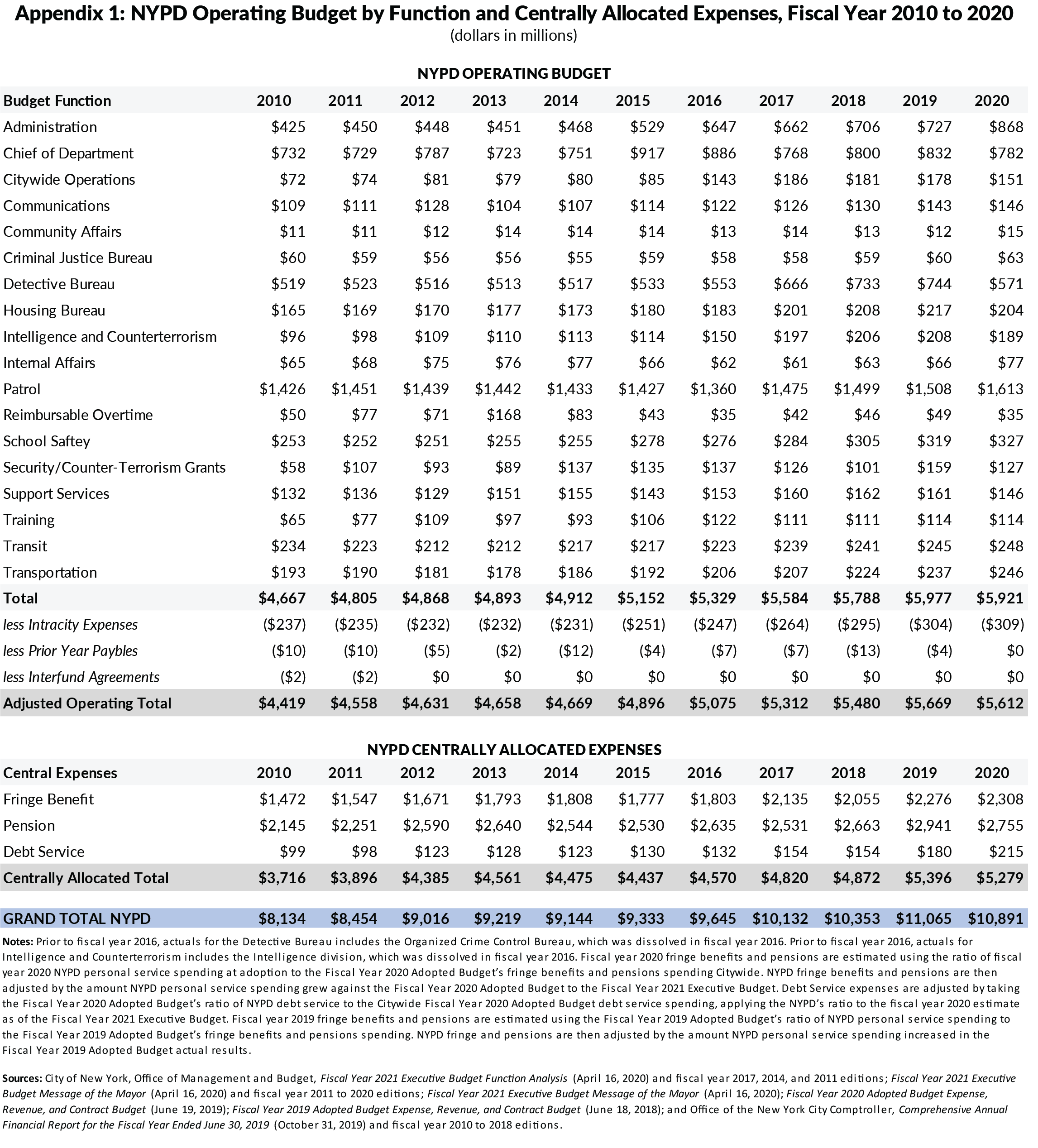