In Greek mythology the gods condemned King Sisyphus to push a boulder up a hill repeatedly, only to have it roll down to the bottom as he approached the top. While he deserves no such punishment, Thomas Prendergast, Chairman and Chief Executive Officer of the Metropolitan Transportation Authority (MTA), must identify with Sisyphus’ fate as he prepares the agency’s capital program, particularly when it comes to rehabilitating and repairing 467 subway stations. As hard as he and his colleagues try to bring the stations to a satisfactory condition—known as a “state of good repair” or SGR—heavy use of the system creates new needs and the goal eludes them. Even if the proposed five-year capital plan for 2015-2019 were fully funded—which it is not—the MTA’s current and planned pace of work would never bring all stations to SGR.

This policy brief examines the nature of the problem and addresses two questions: (1) Given the limited resources available, does the MTA allocate available funding wisely? and (2) What might be done to make the goal of reaching SGR for all stations more achievable?

The answer to the first question is that the MTA sets appropriate priorities in picking stations to rehabilitate and repair. Recommendations that address the second question include reallocating available capital funds from new expansion projects to SGR work, improving the management of station projects to lower costs and permit more progress with available funds, and experimenting with new models of public-private partnerships at selected stations to secure additional capital and implement projects more efficiently. 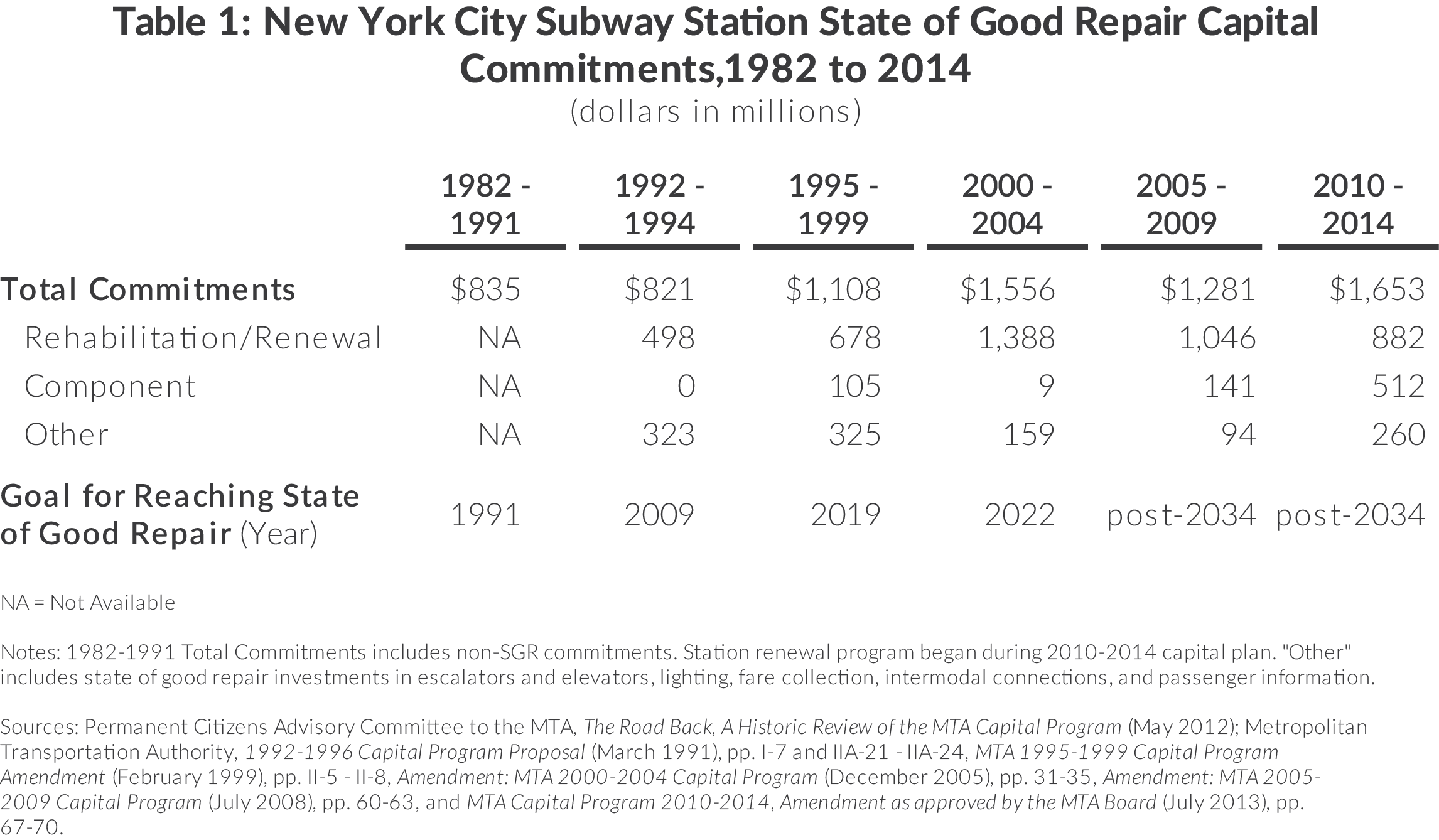 The 2000-2004 capital plan implemented a faster pace of rehabilitation, allocating $1.4 billion, more than double the pace of spending in the previous decade. By continuing work at this pace, the MTA expected to bring all stations to SGR by 2022; however, the allocation for station investment was reduced in the 2005- 2009 plan and no specific date for achieving SGR was set.

Basic arithmetic reveals the troubling nature of this work. For planning purposes the MTA assumes a station’s “useful life” is 35 years; that is, a station requires rehabilitation every 35 years in order to maintain SGR.3 To keep 467 stations in SGR would require an average of about 13 rehabilitations per year. Since 2000 the MTA has averaged about 10 per year.4

After adoption of the 2005-2009 plan the MTA recognized the limitations of the rehabilitation strategy and shifted to a new approach. Instead of rehabilitating an entire station, new work would focus on only those elements or “components” of a station in disrepair. Station components are classified as “architectural” or “structural.” Architectural components relate to the appearance of a station and include its wall tiles, lighting, and painting condition. Structural components relate to functionality and safety and include stairs, platform edges, and ventilators; the system has 15,275 structural components.5 In 2007, and again in 2012, the MTA surveyed all station components and scored each between 1 (best) and 5 (worst). Components ranked 5 require immediate repair and are addressed in the maintenance budget. Components with scores between 3.0 and 4.5 are considered not in SGR, with higher scores reflecting more deteriorated conditions.

Based on the 2007 survey the MTA began shifting funding in the 2005-2009 plan from station rehabilitation projects to component work, and the 2010-2014 plan was the first formulated relying primarily on the component strategy. It included $512 million for work on individual components at multiple stations and $882 million for station “renewals,” projects that address multiple components at a station.

More troubling is the prospect that the component strategy will still never be able to bring all stations to a SGR. The practical useful life of a component varies based on use and environment of a station; however, even if components average useful life were 70 years—that is, twice as long as the MTA currently assumes—an average of 218 structural components, or 1.4 percent of the total, would reach the end of their useful lives and no longer be in SGR each year. The current pace of work under the 2010-14 plan is mitigating an average of 280 components per year.8 At this pace of progress SGR for all station components would not be achieved until 2067.9

Triage for the Next Five Years 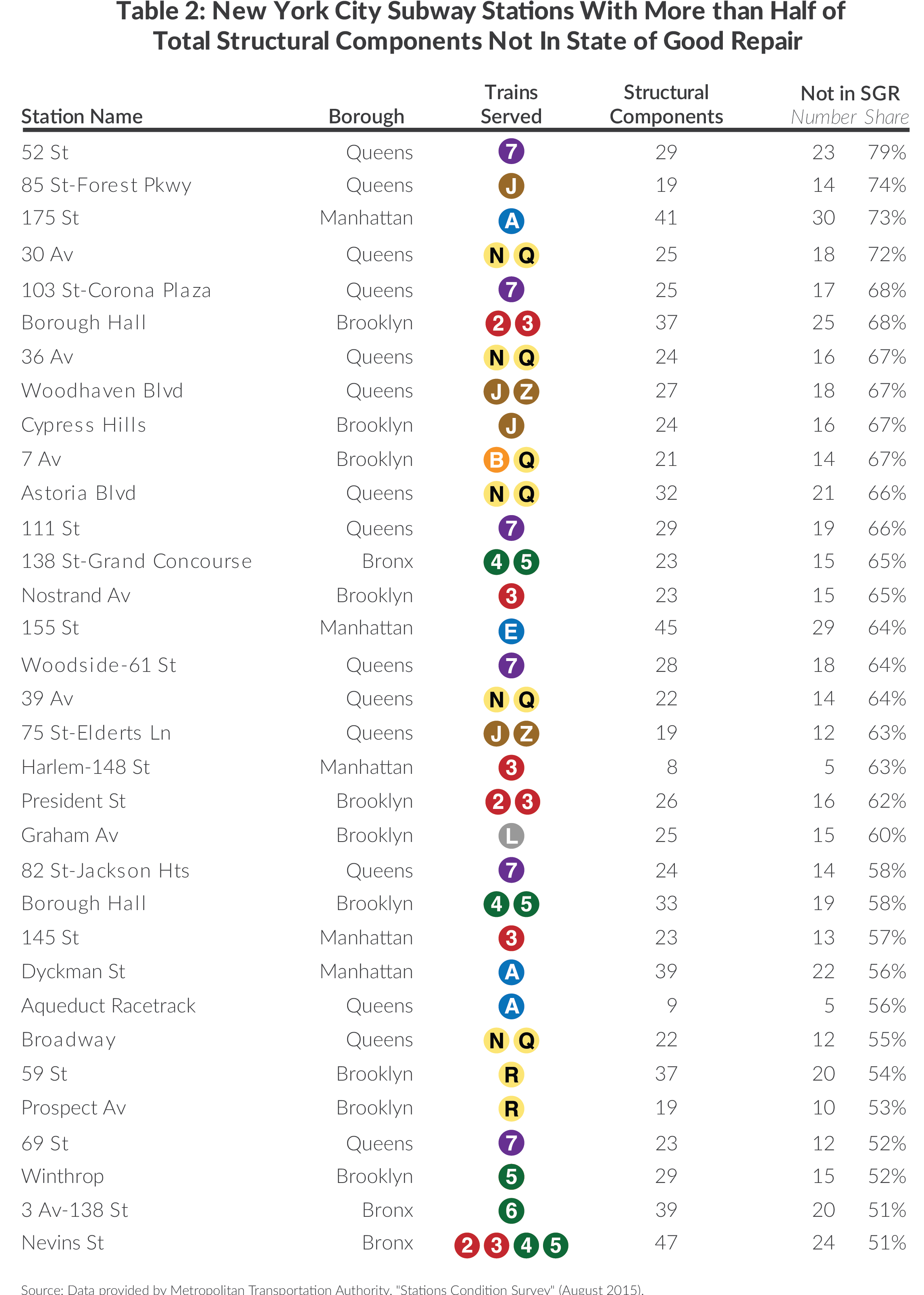 The previously discussed $1.3 billion in station work relates to structural and architectural components; however, the MTA’s proposed capital plan includes another $997 million in investments for elevators, escalators, and accessibility improvements. Approximately half of this amount, $436 million, is for overhauling and replacing 46 elevators and 35 escalators. The other half, $561 million, is to make 13 stations accessible for all users. Following the passage of the Americans with Disabilities Act (ADA) in 1990, the Federal Transit Administration and the MTA came to an agreement to adapt 100 “key stations” by 2020.13 Adapting subway stations to make them accessible, some built more than 100 years ago, is complicated and can be costly. At $43 million per station in the proposed plan, ADA accessibility projects are more than double the cost of most station renewals. Still the MTA is ahead of schedule: by the end of 2016, 89 key stations will be ADA-compliant with the last 11 key stations addressed in the proposed capital plan.14

The MTA's planned pace of work would never bring all stations to SGR.

The MTA’s triage strategy addresses the neediest parts of stations, but achieving SGR will require significant policy changes. A revamped strategy should contain three critical actions: (1) reallocate funds from system expansions to SGR work; (2) improve the management of projects so that more can be achieved with available funds; and (3) develop new public-private partnerships to make available private capital investment in the stations and lower rehabilitation costs.

The Citizens Budget Commission has previously criticized the MTA for allocating large sums to expansion projects without conducting or publicizing a rigorous assessment of these projects and for initiating expansions at the expense of existing assets.15 The proposed 2015-2019 plan makes minimal progress toward SGR for stations and other infrastructure elements, but includes $5.5 billion for expansion projects across the mass transit system. While $2.8 billion of this sum is for continued work on the East Side Access project, another $1.5 billion is to begin work on Phase Two of the Second Avenue Subway, and another $743 million is to begin work on Penn Station Access, a project to build new stations for Metro-North Railroad in the Bronx and have it serve Penn Station.

Diverting some of the new expansion project funds to SGR work would have a significant impact on the pace of achieving SGR in subway stations. Assuming repairing additional station components entails costs similar to those in the proposed plan, each additional $100 million added to the plan would address as many as 73 more components not in SGR annually. An additional $360 million or $433 million per year would be needed in order to reach SGR in 30 years or 20 years, respectively. If reallocated, commitments in the proposed 2015-2019 capital plan for the second phase of the Second Avenue Subway would provide 85 percent and 71 percent, respectively, of these sums.

More could be accomplished if projects were better managed to avoid delays and cost overruns. Table 3 summarizes the record for the 42 station rehabilitations and renewals completed between November 2010 and January 2014. While 14 of the projects had no cost overruns, 28 incurred cost increases, including 10 that more than doubled and two that more than tripled. Among those projects, 13 increased the scope of the project, likely contributing to cost overruns. Other projects with no change in scope showed increased costs 33 percent above budgeted levels.16

The MTA contends the delays and cost overruns are related to a noncompetitive bidding environment from 2005 to 2009: planned projects were budgeted at levels lower than contractors were willing to do the work during this economic boom. Other reasons for overages include the discovery of additional structural problems once a project began.17 Despite these factors, improving project management could yield significant sums to redeploy to other station work. For example, saving 10 percent on budgeted commitments would be the equivalent of adding more than $139 million to the $1.3 billion for station work in the proposed 2015-2019 plan; reducing costs by 25 percent would yield $335 million.

Make Effective Use of Public-Private Partnerships

Increased use of public-private partnerships (P3s) can inject private sector capital and expertise to station work to enhance progress toward SGR. While the MTA already uses some forms of P3s, others are promising and worth exploring. For example, the agency recently estimated savings of 6 percent to 8 percent, or $2.2 billion, from expanded use of design-build and other P3s.18 These options provide opportunities to transfer risk and take advantage of the expertise of the private sector to expedite project timelines.

One type of partnership is the exchange of privately financed station work for additional development rights. The 2014 agreement with SL Green, the developer of One Vanderbilt, a 65-story office tower adjacent to Grand Central Terminal, includes $210 million in subway station improvements to be completed by the developer.19

Another model is that of the New York City Department of Parks and Recreation and its parks conservancies. By partnering with other private and non-profit partners, such “station conservancies” could marshal resources to rehabilitate and maintain stations on an ongoing basis. Appropriate governance and regulation of these conservancies is required to avoid abuses and inequities among neighborhoods, but they can yield significant public benefits.20

Another relevant form of P3 would assign to a private firm or consortium responsibility for financing and implementing capital work and maintaining those stations over their expected useful life.21 The entity would also be given a right to pursue revenues from stations from concessions and advertising. The cost of private capital would be higher than interest on capital raised directly by the MTA through tax-exempt borrowing; however, these costs may be more than offset by private firms’ more efficient construction, reduced upkeep costs of better-designed stations, more diligent maintenance cycles, and more aggressive and imaginative pursuit of revenue opportunities at stations. Even if increased, such revenues are not likely to recover fully private capital and maintenance costs, meaning availability payments from the MTA, conditioned on satisfactory performance, would be necessary.

P3 arrangements have a mixed record in the transportation sector in the United States and overseas. London Underground’s experience with P3s proved problematic, particularly for maintenance of existing infrastructure; a P3 can leave public agencies at risk when private parties fail to perform adequately.22 Still, a well-designed experiment at subway stations could lead to a model that allows an increased pace of investment as well as a higher standard of maintenance than has been achieved by the MTA in recent years.23

Instead of continuing to imitate Sisyphus, the MTA's leaders should set new goals and adopt new practices.

As the MTA finalizes a revised 2015-2019 capital plan for approval by the Capital Program Review Board, it should pursue the recommended strategies. The agency should reallocate resources from expansions to state of good repair work and it should improve its project management practices. The MTA should also identify opportunities for introducing station conservancies and inviting private partners into station-related P3s. Although these strategies require careful consideration and reform of longstanding practices, the MTA should not wait to take innovative action. Instead of continuing to imitate Sisyphus, the agency’s leaders should set new goals and adopt new practices.