The New York State Executive Budget for Fiscal Year 2021 includes an extension of the Health Care Reform Act (HCRA). HCRA is used commonly by policymakers to refer to the health care policies established in the law, as well as to describe the sources and uses of funding generated by its provisions. HCRA was initially enacted in 1996 and has been renewed and revised multiple times; typically renewals have been for three years.

The Executive Budget does not propose increases in the taxes authorized by HCRA; however, the State’s significant budget gap means such increases may be considered. The Medicaid Redesign Team is reconvening and is charged with finding $2.5 billion in State budget savings, including a directive to “find industry efficiencies and/or additional industry revenue,” which could include an expansion of HCRA’s taxes.1

HCRA tax increases should be avoided as a strategy for balancing the Medicaid budget because that action increases the cost of health insurance premiums and likely depresses wage growth for a majority of New Yorkers. The current HCRA structure uses revenues from the health care sector to fund a growing portion of the State’s Medicaid program. Given the significance of HCRA and the potential for changes, it is important for lawmakers to understand the significant impact of HCRA taxes and legislation.

1. The HCRA fund was created to fund a set of public health care programs

HCRA was enacted in 1996 to overhaul New York State’s regulation of payments from insurers to health care providers and create new revenue streams to fund specific programs. Between the 1960s— shortly after the federal creation of Medicare and Medicaid— and the mid-1990s the State used various structures to regulate rates that insurers paid providers to maintain providers’ financial stability. By the mid-1990s, the State found that its most comprehensive effort to regulate health care payments, the Prospective Hospital Reimbursement Methodology (NYPHRM), was not meeting its goals to contain hospital cost growth, promote the financial sustainability of safety net hospitals, and maintain access to hospital care for all New Yorkers.2

In 1996 the State replaced NYPHRM with HCRA, which allowed hospitals and private insurers to negotiate reimbursement rates.3 However, since support for certain “public goods”– notably graduate medical education, hospital charity care, and certain rural health facilities– would not be included in negotiated rates, HCRA levied new taxes and assessments on insurers and providers to fund them.4 These new receipts were directed into the HCRA fund, a dedicated revenue pool for the State to spend on health care purposes. In years when HCRA receipts exceed disbursements for dedicated purposes, the additional receipts can be swept, or “offloaded,” to pay for State costs of the Medicaid program, which otherwise would be paid from the General Fund.

2. HCRA revenues have increased markedly and are now about $6 billion annually

Table 1 summarizes the major sources of HCRA funds, along with the originally enacted and current rates associated with the major taxes.7 The two largest sources are the Hospital Surcharge (Surcharge), a tax on hospital services revenue that varies among payers, and the Covered Lives Assessment (CLA), a tax per “covered life” on insurers that varies regionally. Both tax rates have increased since initial enactment. Other HCRA revenues are from additional assessments on health care providers, insurers, and consumers. 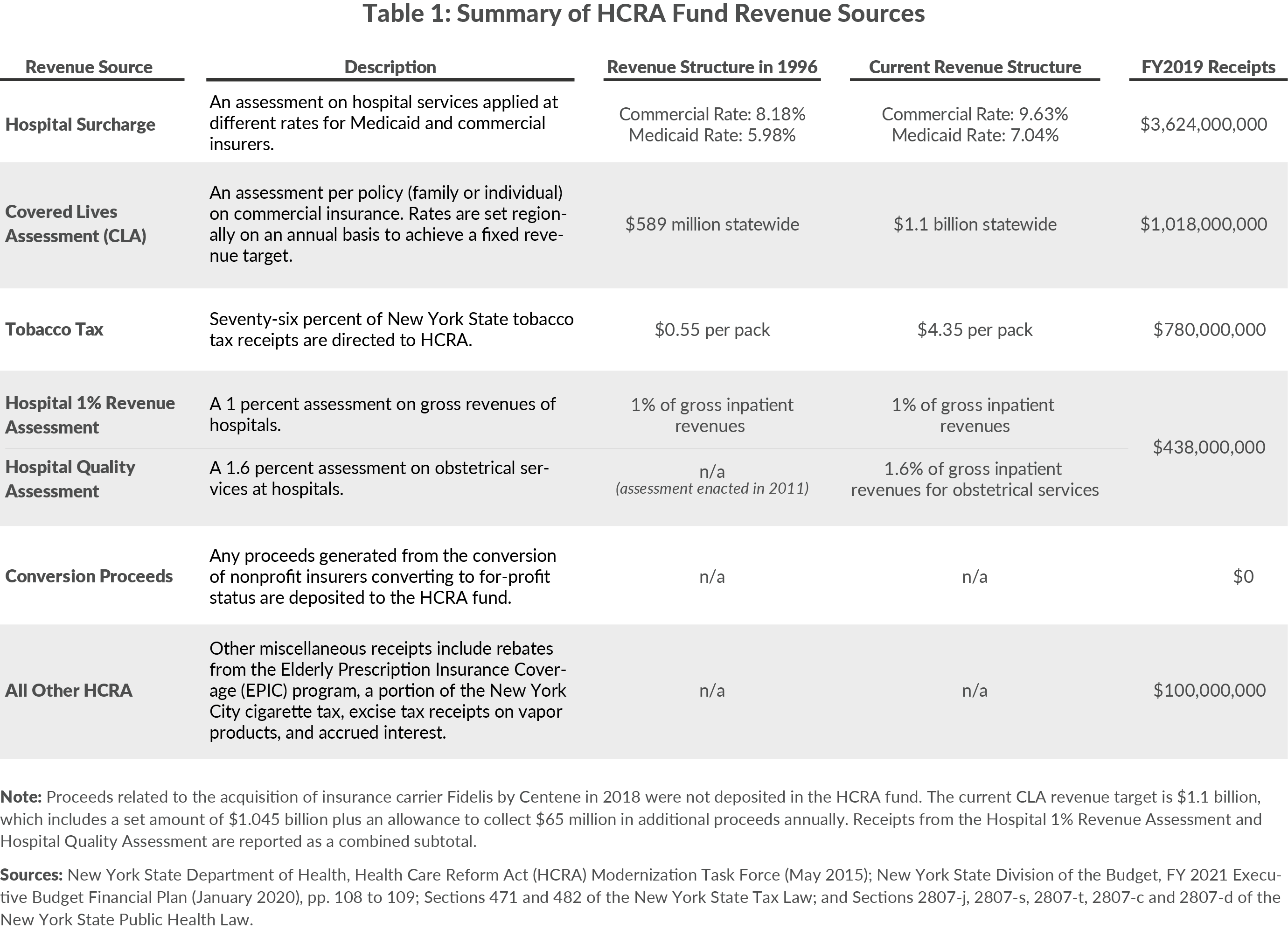 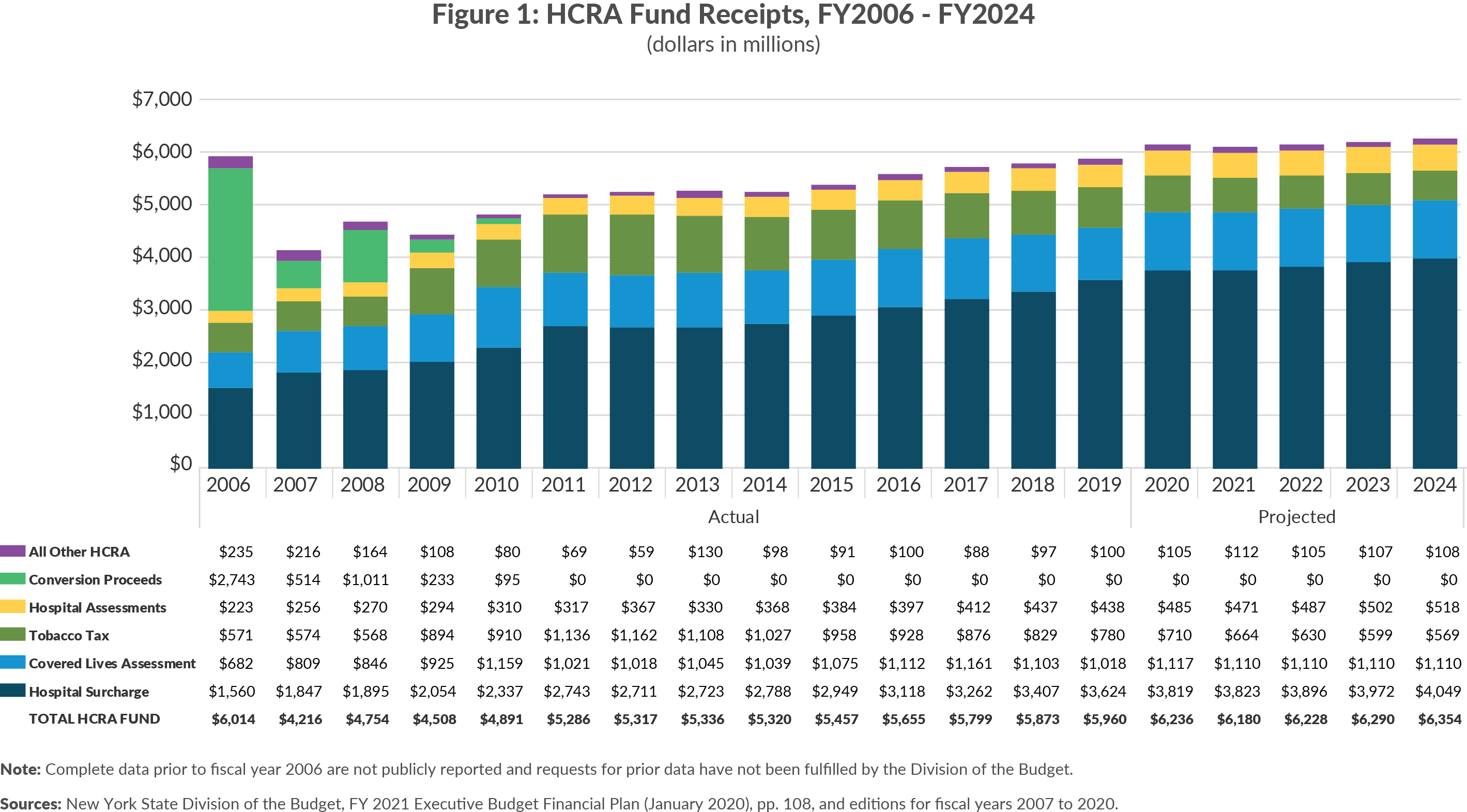 3. HCRA taxes increase health insurance premiums at least 4.3 percent or about $1,000 annually for a family plan

Most of these taxes are passed on to commercial health insurance purchasers in the form of higher premiums. (A portion of the Surcharge is paid by Medicaid.) Based on claims data of private insurers submitted to the State annually, the Surcharge increases commercial insurance costs by approximately 3.1 percent. The CLA increases premiums by approximately 1.2 percent for a combined impact of 4.3 percent.10(See Figure 2.) Other HCRA revenues, particularly Hospital 1% Revenue Assessment and the Hospital Quality Assessment, also increase premiums, but their impacts could not be estimated for this analysis.11

The impact of the HCRA taxes is not uniform across the State. The CLA rate is calculated on a regional basis based on the cost of graduate medical education conducted within that region; areas with higher spending on graduate medical education pay higher CLA rates. Due to varied regional rate-setting, commercial plans (and by extension commercially-insured New Yorkers) pay more into the HCRA fund, which helps support Medicaid payments for graduate medical education in a region. CLA rates vary widely; the New York City rate for an individual is $173.55 per year compared to $8.75 in the Utica region. As shown in Figure 3, the combined impact varies from 3.1 percent on Long island to 5.2 percent in Rochester. 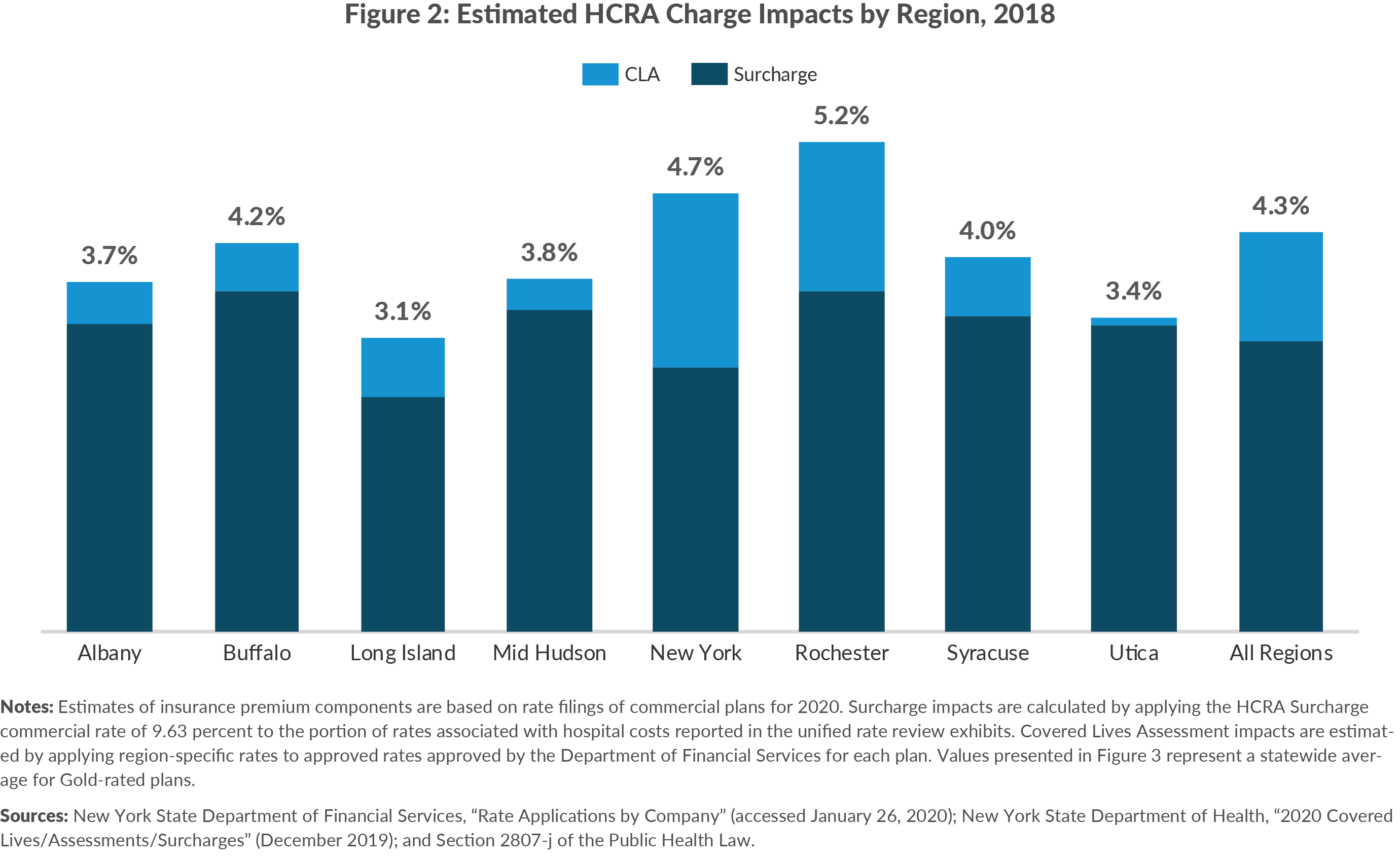 Converting the percent of premium impact to a dollar value shows the statewide average annual cost of HCRA taxes is approximately $350 for individual coverage and $1,000 for family coverage. (See Table 2.) More than half of New Yorkers are enrolled in commercial coverage, meaning HCRA taxes are a significant annual cost to most New Yorkers.

A majority of costs for employer-based plans is paid by the employer providing health insurance coverage as part of employee compensation; but research shows there is a tradeoff between wages and benefits, with the employee bearing the cost of coverage through reduced wages. That means HCRA taxes represent a reduction in employee wages, and an increase in HCRA taxes would depress income growth for New Yorkers.12 The inverse may be true of a reduction in HCRA taxes, depending on whether employers pass health care savings to employees.

4. About $600 million or 10 percent of HCRA revenue comes from the federal government rather than directly from New Yorkers

An interesting feature of the HCRA Surcharge is that it taxes most sources of hospital revenue including Medicaid. As shown in Table 1, the current Surcharge rate for Medicaid is 7.04 percent. The Medicaid payments are set by the State to include the cost of the Surcharge, and like other Medicaid costs these rates are partly funded (typically 50 percent) by the federal government. Thus, the federal government pays a significant share of Surcharge revenue.

In fiscal year 2020 approximately 29 percent, or $1.1 billion, of Surcharge revenues is derived from the Medicaid assessment.13 The federal government pays half this sum or $557 million, which will grow as Surcharge revenue grows.

New York’s ability to maintain the HCRA tax structure and shift cost to the federal government is related to a special “D’Amato Provision,” named after its champion former Senator Alphonse D’Amato, who championed the provision in federal law to accompany the original HCRA statute. The federal government has long been concerned that some states use taxes on health care providers to obtain federal Medicaid funding but then refund the money to the providers in other ways. This leverages federal funds without, in effect, actually requiring any State match. Accordingly federal rules require that the taxes be “broad-based and uniform.” The D’Amato Provision grants New York a unique exemption from the broad-based and uniform tax requirements for its HCRA taxes.14

5. More than $700 million of HCRA revenue is derived from State funds

Just as the federal government provides substantial HCRA revenue, the State government provides an even larger share. The State is a HCRA taxpayer in two ways—via the Surcharge on Medicaid and via premiums it pays to purchase insurance for its own workers and retirees.15

Like other costs in the Medicaid program, half of the Surcharge on Medicaid revenue is paid by the State. The current annual amount is approximately $557 million.16 Additionally, the State pays a share of health insurance premiums for its workforce and retirees. Based on the most recent premiums for each type of employee, the Surcharge annually costs the State approximately $120 million and the CLA costs approximately $45 million for a combined total of $165 million.17 Together with the Medicaid share, this yields nearly $700 million annually that the State pays via HCRA taxes.

6. Most HCRA revenue is used to offset Medicaid costs in the General Fund, rather than for originally intended purposes

While HCRA taxes were initially enacted to pay for socially desirable services that would not be financed through competitively negotiated insurance payment rates to providers, in recent years about 80 percent of the revenue has been used to pay for the State’s share of Medicaid.18 (See Figure 4.) This compares with a lower 58 percent in 2006. The share may have been even lower in HCRA’s initial years, but the data are unavailable.

Much of this Medicaid funding is consistent with the law’s original intent. Nearly $1 billion annually finances the Disproportionate Share Hospital (DSH) Indigent Care Pool, supplemental Medicaid payments to hospitals backfilling financial losses from serving Medicaid or uninsured patients; this is comparable to the charity care funding that predated HCRA and which its taxes were intended to support. Another $4 billion pays for other Medicaid services that otherwise would be paid from the General Fund. A portion of that Medicaid funding covers graduate medical education and other costs originally intended to be covered by HCRA taxes, but the precise amount for those uses is unclear. It is likely that approximately $2 billion annually in HCRA taxes is effectively substituting for general fund revenues that would be required to support Medicaid services, which were not among the initial “public goods” HCRA taxes were designed to fund.19 This allocation is legally permitted, but is a deviation from the original intended uses of funding. 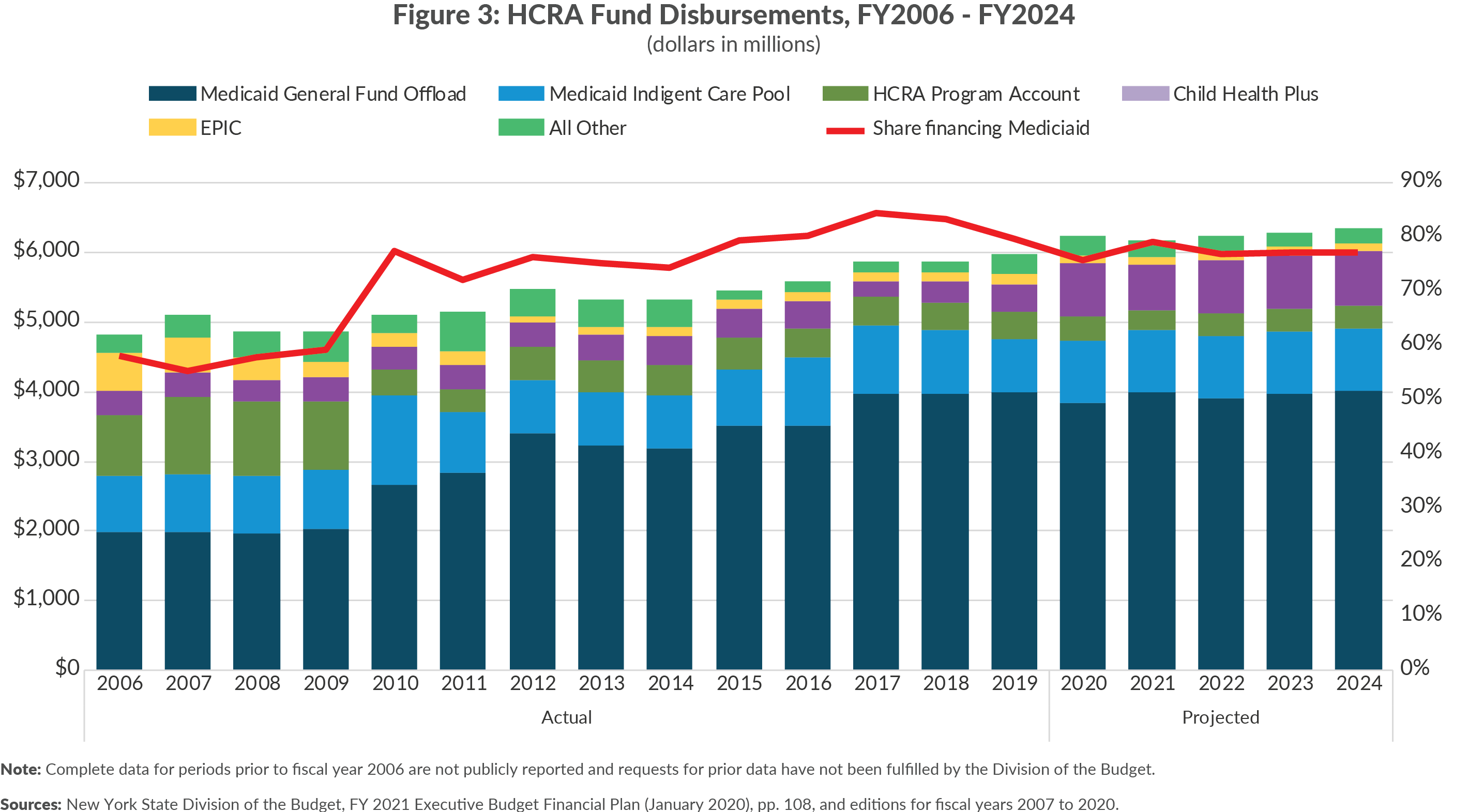 The Fiscal Year 2021 Executive Budget includes a three-year HCRA extension. However, as lawmakers negotiate this year’s budget and evaluate the State’s five-year financial plan, they should review HCRA’s role in health care funding and its impact upon privately insured New Yorkers. HCRA taxes place a real, significant cost upon New Yorkers and the State itself. This year’s budget negotiations will be driven by actions taken in the Medicaid program, and HCRA taxes should not be increased.