State Agreement Is a Template to Avoid City Layoffs

Yesterday, Governor Andrew Cuomo and the Civil Service Employees Association (CSEA) reached a preliminary five-year contractual agreement that provides substantial savings for New York State and, if adopted by other State employee unions, could spare 9,800 employees from the pain of layoffs.  In New York City, Mayor Michael Bloomberg, the City Council and municipal unions continue to look for options to prevent 4,300 teacher layoffs, 20 fire company closures and a slew of social service cuts.  The State agreement provides a good template for municipal savings on salaries and wages and health insurance.

The Governor’s agreement with the CESA would produce five-year savings of $3.8 billion if adopted by all State employees.  The major provisions of the contract are:

Following the template provided by the Governor and the CSEA can produce $1.4 billion in savings for New York City in fiscal year 2012 – more than enough to avert layoffs and other cuts.  And the savings continue in subsequent years.

The City’s leaders and the Municipal Labor Committee should consider these changes seriously.  While one-shots such as drawdowns from the Retiree Health Benefits Trust Fund or the Health Insurance Stabilization Fund seem like easy answers, these fiscal gimmicks provide only temporary relief from budget pressures; the City will find itself in the same predicament again next year unless it follows the example set by State labor and management. 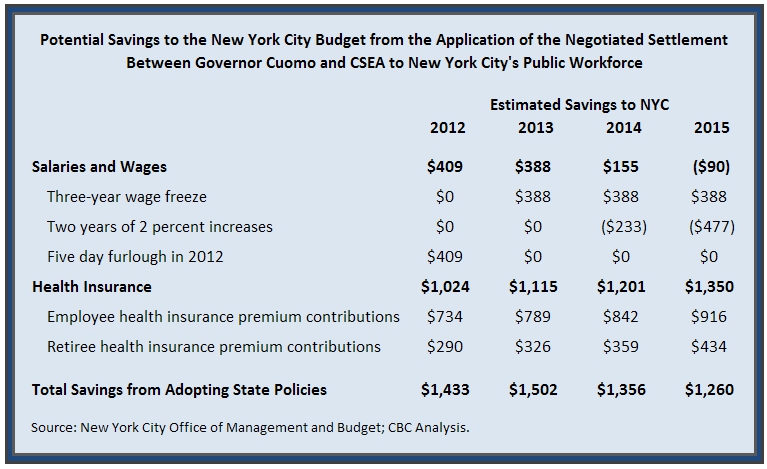