The Enacted State Budget for Fiscal Year 2017-2018 authorizes $25.8 billion in school aid, an increase over last year of $1.1 billion, or 4.4 percent. Almost all of this aid ($25.2 billion) is distributed via established formulas.  Foundation Aid, the largest component, grows 4.25 percent to more than $17 billion. Expense-based aid increases 4.7 percent, while other types of aid are essentially flat. Despite the $700 million increase in Foundation Aid, the State failed to reform its distribution formula, leaving intact an inequitable pattern of shortchanging poorer school districts and rewarding wealthier ones.

Originally enacted in 2007, the Foundation Aid formula is based on the amount needed to provide a sound basic education, adjusted for student needs and regional costs, less a local share.  The Citizens Budget Commission (CBC) has previously noted three troublesome elements that undermine the formula’s goal of driving state aid to districts with the highest needs: inconsistent local share calculations; arbitrary floors, ceilings, phase-ins, and add-ons; and outdated measures of poverty.[1]

The Executive Budget proposed to repeal major components of the Foundation Aid formula, which would have locked in existing inequities.[2] The enacted budget rejected those changes but did not include more beneficial reforms. Instead, while keeping the overall Foundation Aid formula intact, the enacted budget further distorted the distribution pattern in two ways: inserting guaranteed minimum increases for every school district regardless of need or enrollment decline and providing “Additional Increases” in aid for districts meeting certain criteria. The budget also continued the “phase-in,” which limits year-over-year growth in Foundation Aid for underfunded districts, albeit at less restrictive rates than in prior years.[3]

In the 2017-2018 school year, districts are guaranteed to receive the greater of:

The enacted budget continues phase-ins that cap the percentage increase in a district’s aid even if elements in the formula measuring need justify a greater increase, although the phase-in rates are more generous than recent years. The phase-in percentages for the five largest school districts are 17.7 percent for New York City, 12.69 percent for Buffalo, 10.6 percent for Rochester, 19.1 percent for Syracuse, and 10.78 percent for Yonkers.  There are also phase-ins of 10.3 percent for districts with a 2000 census poverty level equal to or greater than 26 percent and 4.87 percent for all other districts.[4] To counter the disproportionate impact of the cap on six districts, the enacted budget requires that all districts receive at least 44.75 percent of their allocation pursuant to the formula if there was no growth limit. 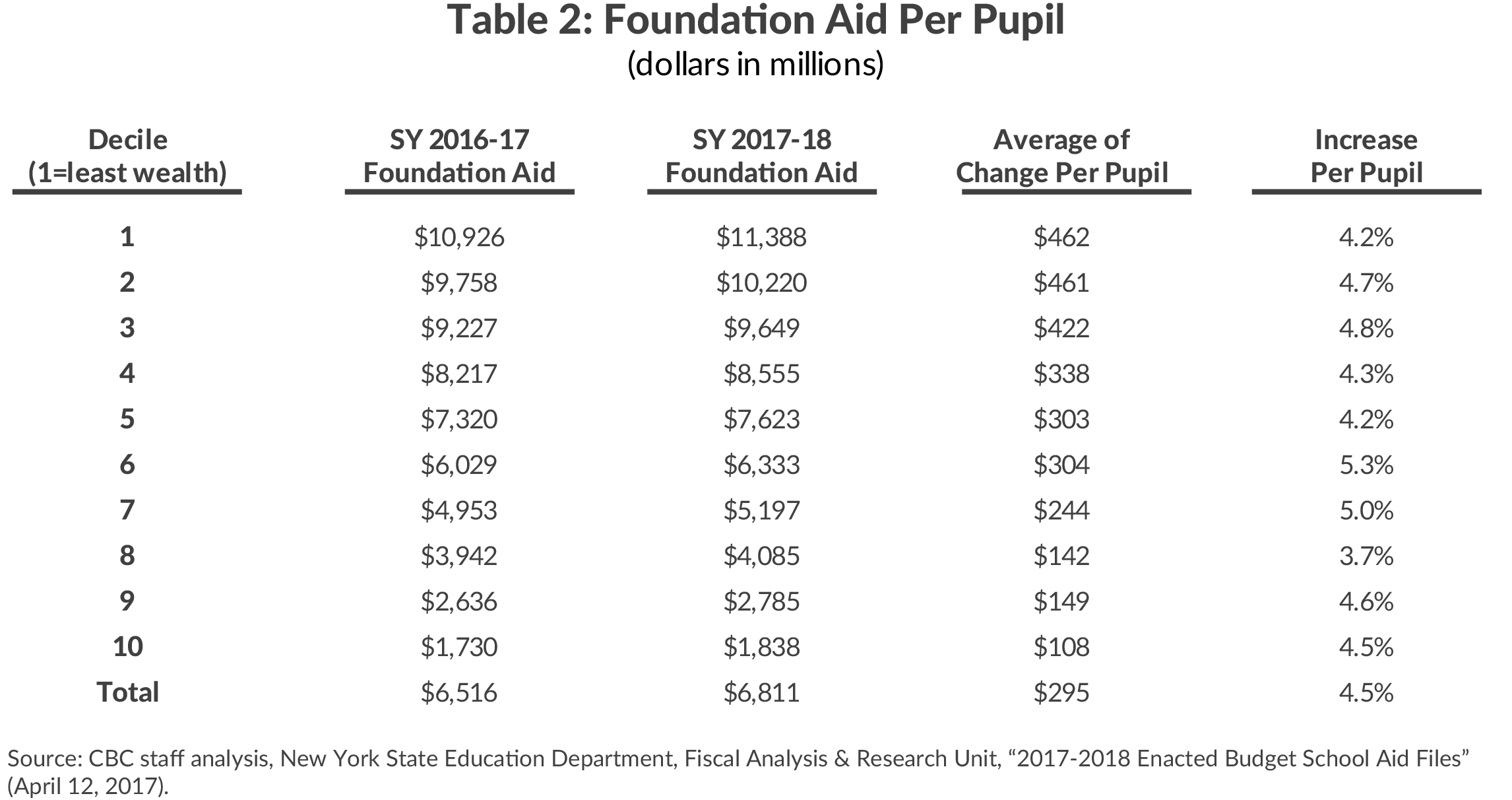 A Better Way to Do It

CBC’s recommendations for reforming the Foundation Aid formula would have directed approximately $2.8 billion toward low-wealth, high-need districts while increasing total spending only $569 million over 2016-2017 levels.[5] Table 3 below compares the change in per pupil distributions in the 2017-2018 enacted budget to CBC’s recommended funding levels. Had the State heeded CBC’s recommendations, state taxpayers could have saved a total of $118 million, while driving an additional $1.9 billion to low-wealth, high-need districts. Foundation Aid for districts in the first decile would have increased by almost $3,000 per pupil had the CBC recommendations been adopted, compared to less than $500 increase per pupil in the enacted budget.  In contrast, districts in the wealthiest two deciles would have lost all of their Foundation Aid under the CBC proposal, instead of increasing 4.5 percent. 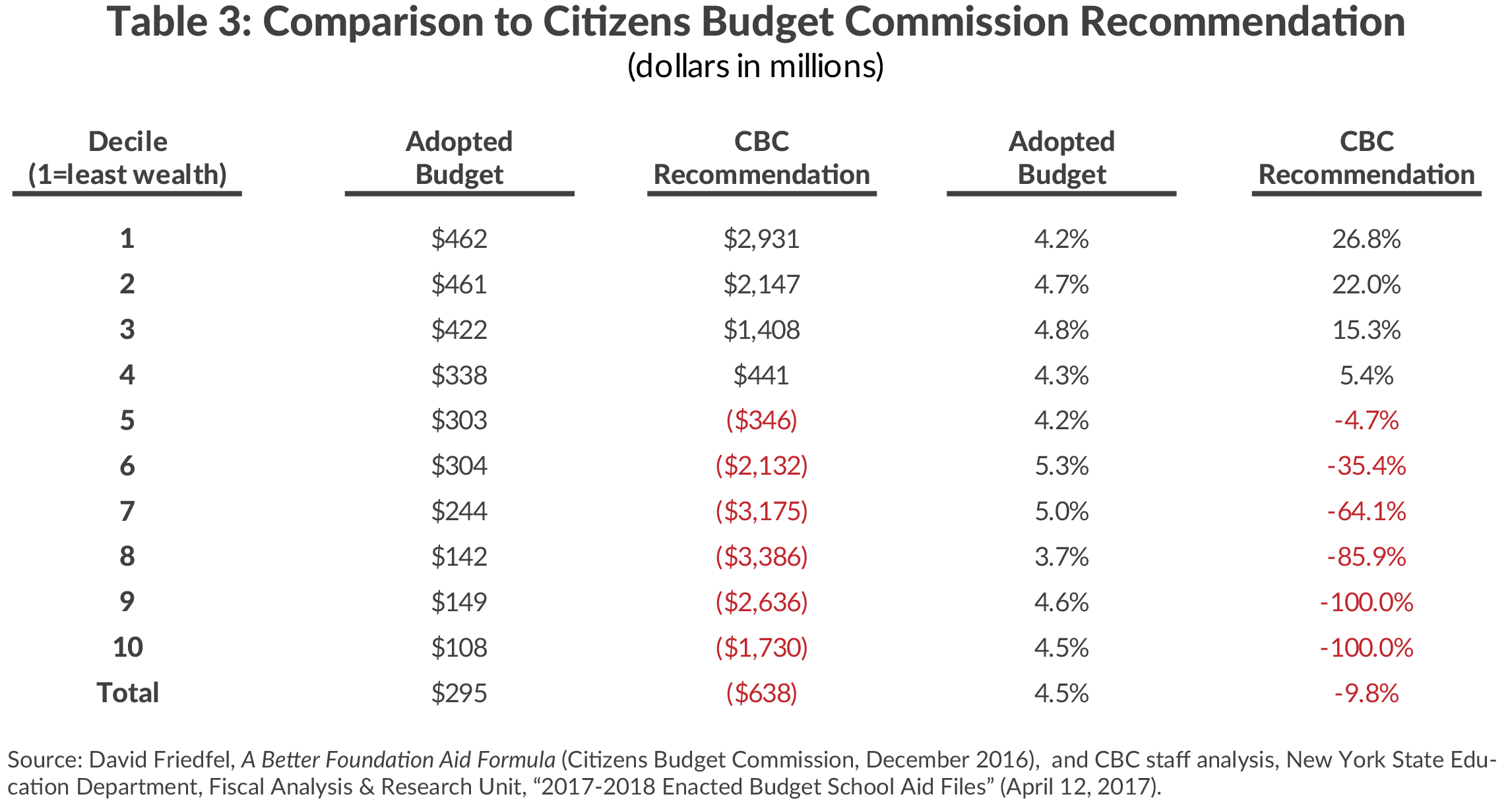 The Foundation Aid formula should be reformed so that it can accomplish its original purpose, ensuring that regardless of a district’s wealth, students receive the resources necessary to achieve a sound basic education. The “Additional Increases,” the provision requiring that districts receive at least 44.75 percent of aid calculated under the Foundation Aid formula, and increasing the phase-in percentages  are progressive changes but are modest in their impact and do nothing to address the underlying problems with the formula. In order to adequately fund education in all districts without excessive state spending, more comprehensive modifications are required.  Instead, the 2017-2018 State Budget further complicates the formula and exacerbates existing inequities by including generous, unnecessary, and wasteful minimum increases for all school districts.