Think Your Rent Is High?

Housing affordability is a perennial concern of New Yorkers and their elected officials, and the production and preservation of affordable housing is a key priority of the de Blasio Administration. The Mayor has set the City’s affordable housing production goals to 300,000 units built or preserved through 2026, with 25 percent reserved for the lowest income New Yorkers. In addition, the continued deterioration of affordable units in public housing has prompted the Mayor to increase City funding for the New York City Housing Authority (NYCHA). Both initiatives come at a rising cost to the public. In fiscal year 2018, the value of City capital dollars committed to housing needs exceeded $1 billion for the first time. With an unprecedented level of City resources going to housing, a necessary first step in evaluating the impact of these policies is identifying which portions of the city’s population are most affected by the affordability crisis.

According to recently released data from the New York City Housing and Vacancy Survey (HVS), more than 921,000 renter households in New York City, or 44 percent of all renters, pay at least 30 percent of their income in rent after accounting for the value of rental housing vouchers and Supplemental Nutrition Assistance Program (SNAP) benefits. More than half of these households–greater than 462,000 families and single adults–are considered severely rent burdened, which means they pay at least half of their income in rent. Severe rent burdens are most common among households earning less than 50 percent of the Area Median Income (AMI) and disproportionately affect single households, seniors, and single parents.

Since the previous HVS was conducted in 2014, the share of severely burdened renters remained steady at 22 percent of households; however, the share of low-income, severely rent-burdened single households, seniors, and single parents increased.

The number of burdened renters and growing burdens underscore the fact that the City cannot and should not be expected to close the affordability gap on its own. The most effective tools for moderating rent burdens on the lowest-income households have been the U.S. Department of Housing and Urban Development’s (HUD) Housing Choice Voucher program, commonly known as Section 8, and public housing. Any strategy to protect or preserve affordable housing must include public housing and requires federal assistance.

The recently released 2017 HVS collects detailed information on New York City’s housing market.  Households are considered rent burdened if they pay at least 30 percent of income in rent. Based on gross rent, which is contract rent plus monthly utility costs, 56 percent of New York City’s renter households, or nearly 1.2 million households, were rent burdened in 2017.1

The HVS also reports out-of-pocket housing expenses, which include the actual amount that tenants pay each month after accounting for government subsidies like the federal Section 8 Housing Choice Vouchers and financial support from family or friends. This is a more accurate measure of housing costs than the gross rent measure, which does not reflect the actual rents paid by many New York City tenants.

Citizens Budget Commission (CBC) uses out-of-pocket rent data as a basis for developing an “adjusted income measure” that incorporates another common form of household support, SNAP benefits. (See the 2015 CBC report, Whose Burden Is It Anyway, for more detail on the methodology.) 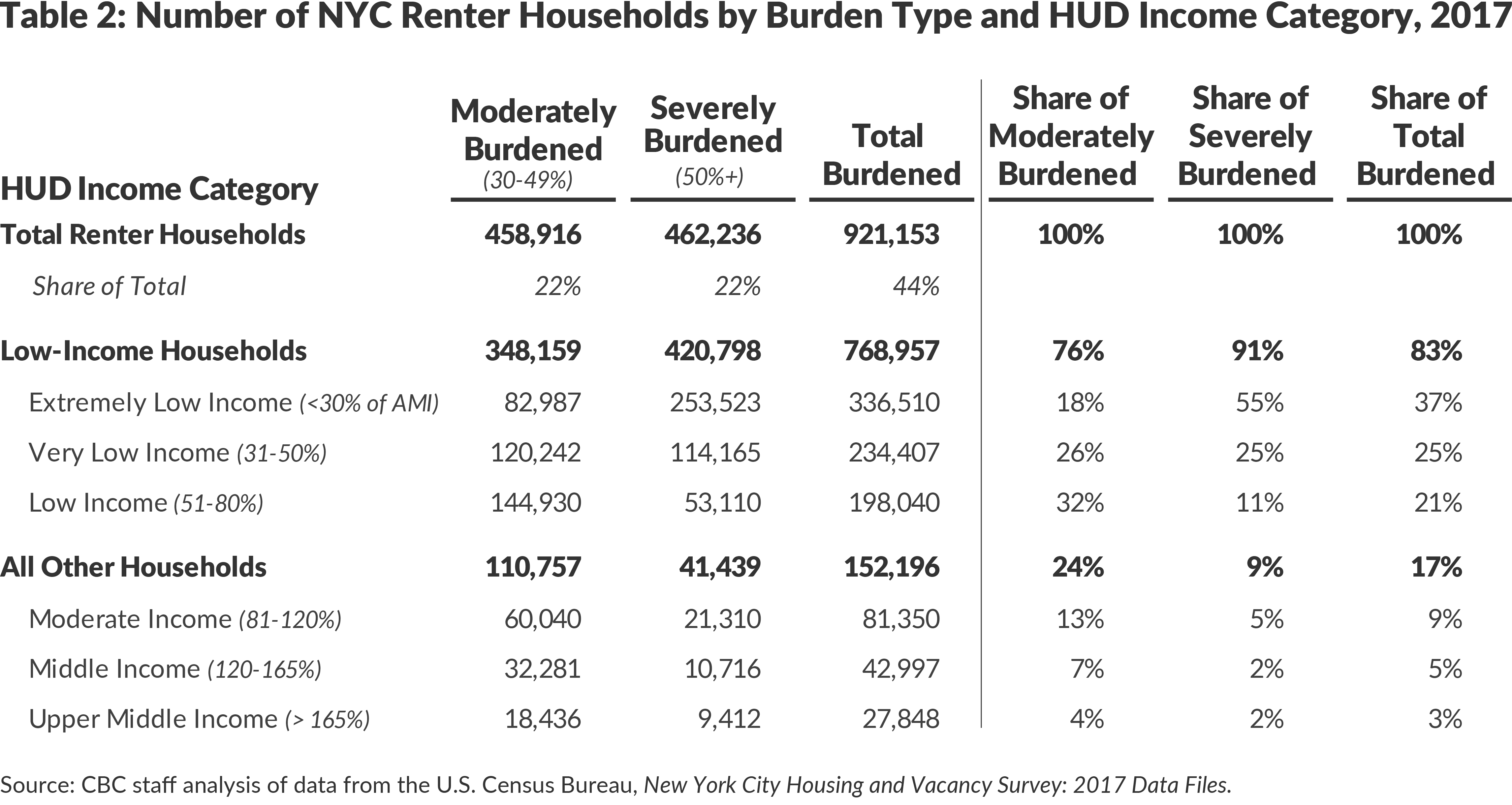 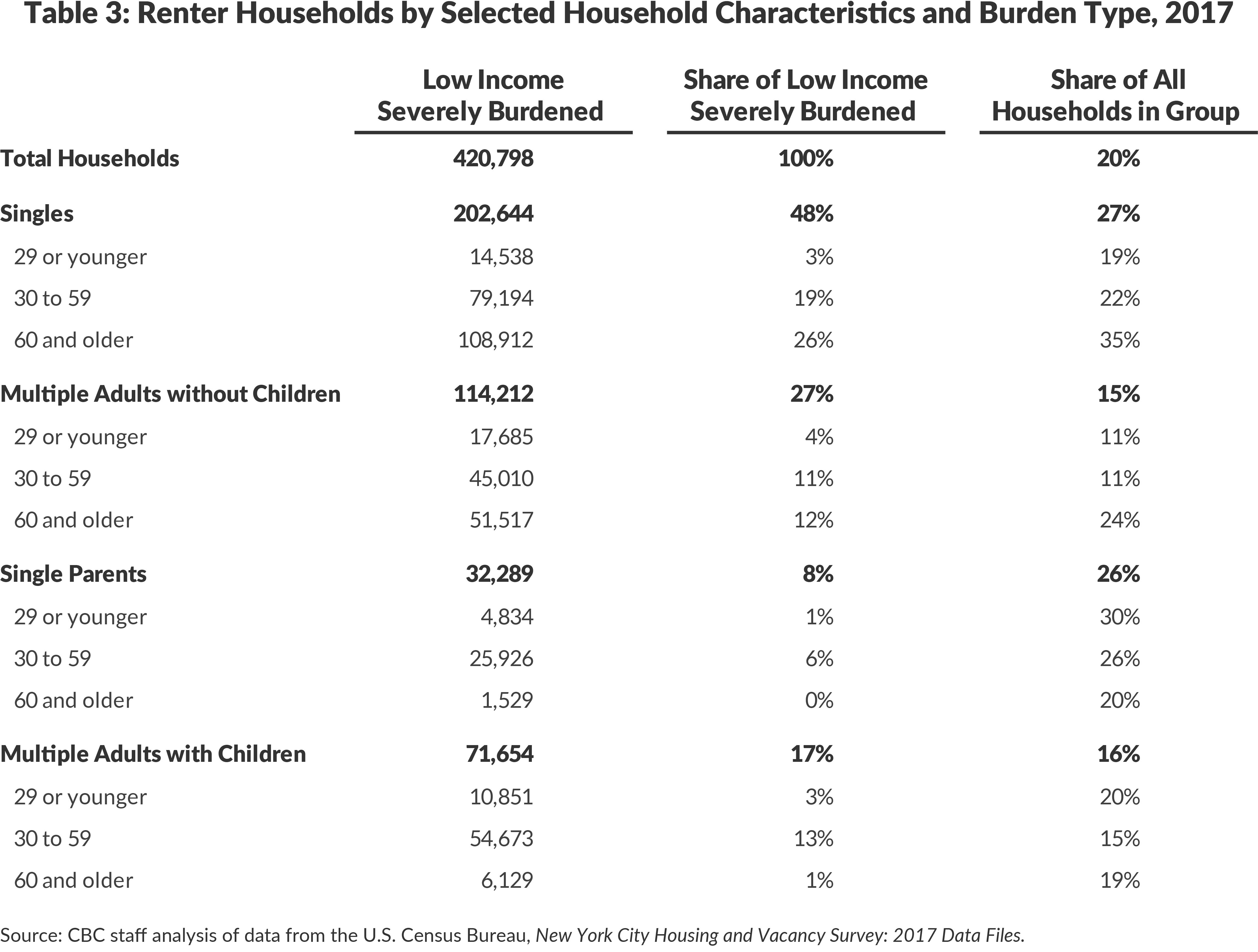 The HVS provides information that identifies the types of housing and support that have been most effective for managing the rent burdens of the ELI and VLI renter households who are not rent burdened.

Figure 5 shows that nearly all of the city’s 271,000 non-burdened ELI and VLI households benefit from at least one public subsidy program. Two-thirds of these households benefited from one of two federal housing benefits: public housing or the Section 8 Housing Choice Voucher program. A small percentage of renters also live in buildings that receive HUD benefits through programs that support senior or supportive housing. These programs use federal subsidies to make up the difference between what low-income households can afford to pay in rent and the actual cost of operating their unit.6 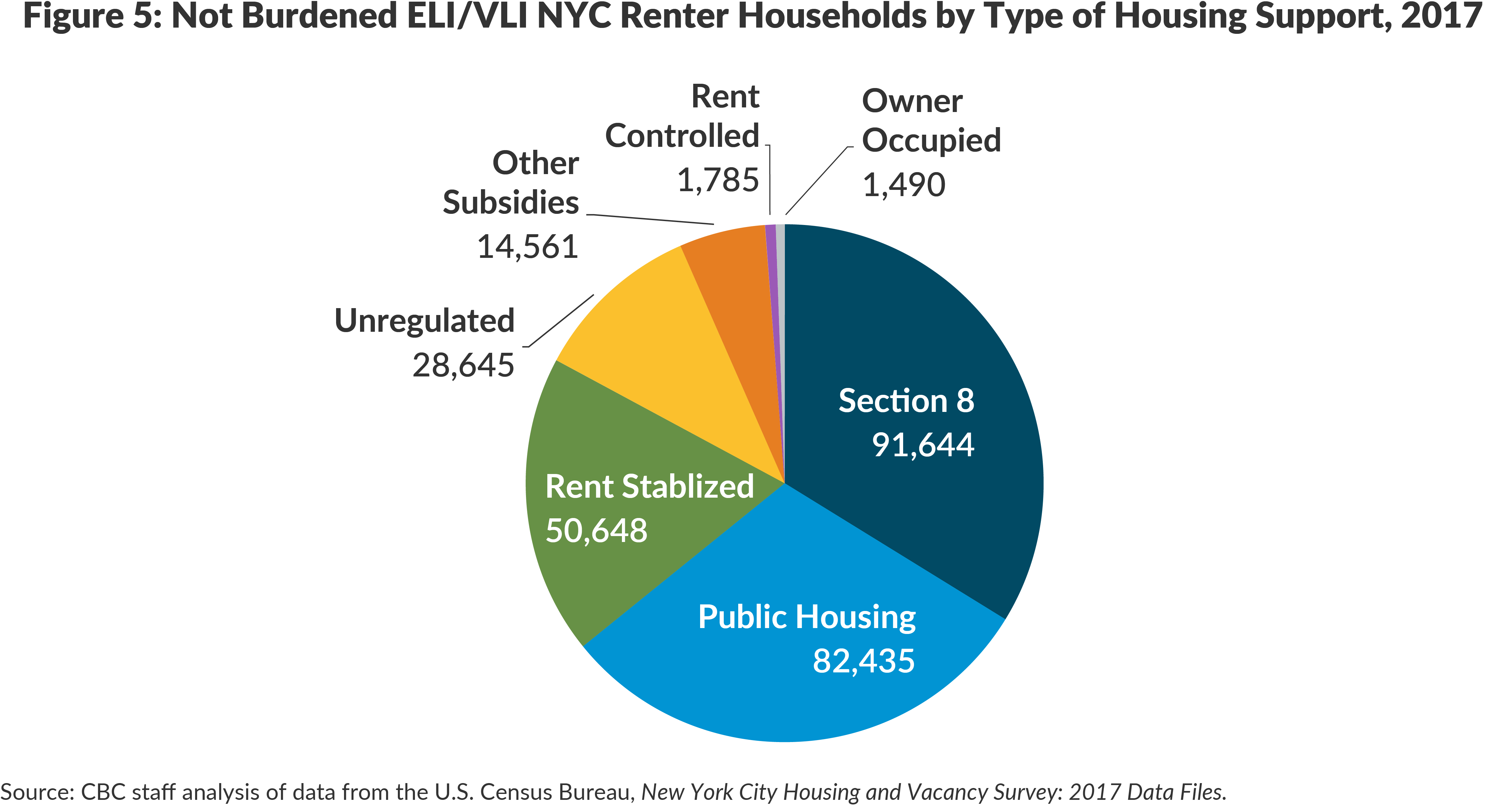 Another 20 percent of non-burdened households live in rent stabilized or Mitchell-Lama rental buildings. The HVS dataset does not include information on whether these buildings receive any additional benefits, such as 421-a, that subsidize construction or ongoing operations. 7  These subsidy programs typically require landlords to set aside a certain percentage of units as affordable housing and opt into the rent regulation system in exchange for receiving public benefits. While they are an important source of affordable housing, they help significantly fewer ELI and VLI households than the federal programs.

Just 11 percent of non-burdened ELI/VLI households live in units that are not subject to rent regulation and do not receive any local, state, or federal subsidies. Of these households, more than half live in two-family homes, and more than 70 percent live in buildings with five or fewer units. Small rental properties provide the bulk of housing units that are affordable without requiring public subsidy, but these units account for only a fraction of the overall need.8

This analysis illustrates the challenges associated with housing New York City’s lowest income households. As of 2017, more than 462,000 households in New York City were severely rent burdened. Nearly 80 percent of these severely rent-burdened households are ELI or VLI–a total that exceeds the Mayor’s entire 300,000 unit Housing New York plan. The City cannot be expected to handle the affordability problem on its own.

The extent of these needs underscores the important role of public housing in New York City’s housing market. Federal subsidies for public housing and rental vouchers have been important tools for providing affordable housing for ELI and VLI families because these households require the deepest levels of subsidy.9 NYCHA owns more than 175,000 units of public housing and provides permanently affordable housing to hundreds of thousands of the city’s lowest income residents. The average family living in NYCHA housing earns $24,423 and pays $522 each month in rent.10 Yet after years of underfunding and mismanagement, NYCHA’s public housing units are in the worst physical condition of any rental housing in the city.11 The estimated cost of bringing these units back to a state of good repair is nearly $32 billion, a figure that vastly exceeds NYCHA’s or the City’s financial wherewithal. Without dramatic action, many of its developments will soon reach the point at which they are no longer cost-effective to repair. Any strategy to protect or preserve affordable housing must include New York City’s public housing and requires State and federal assistance. 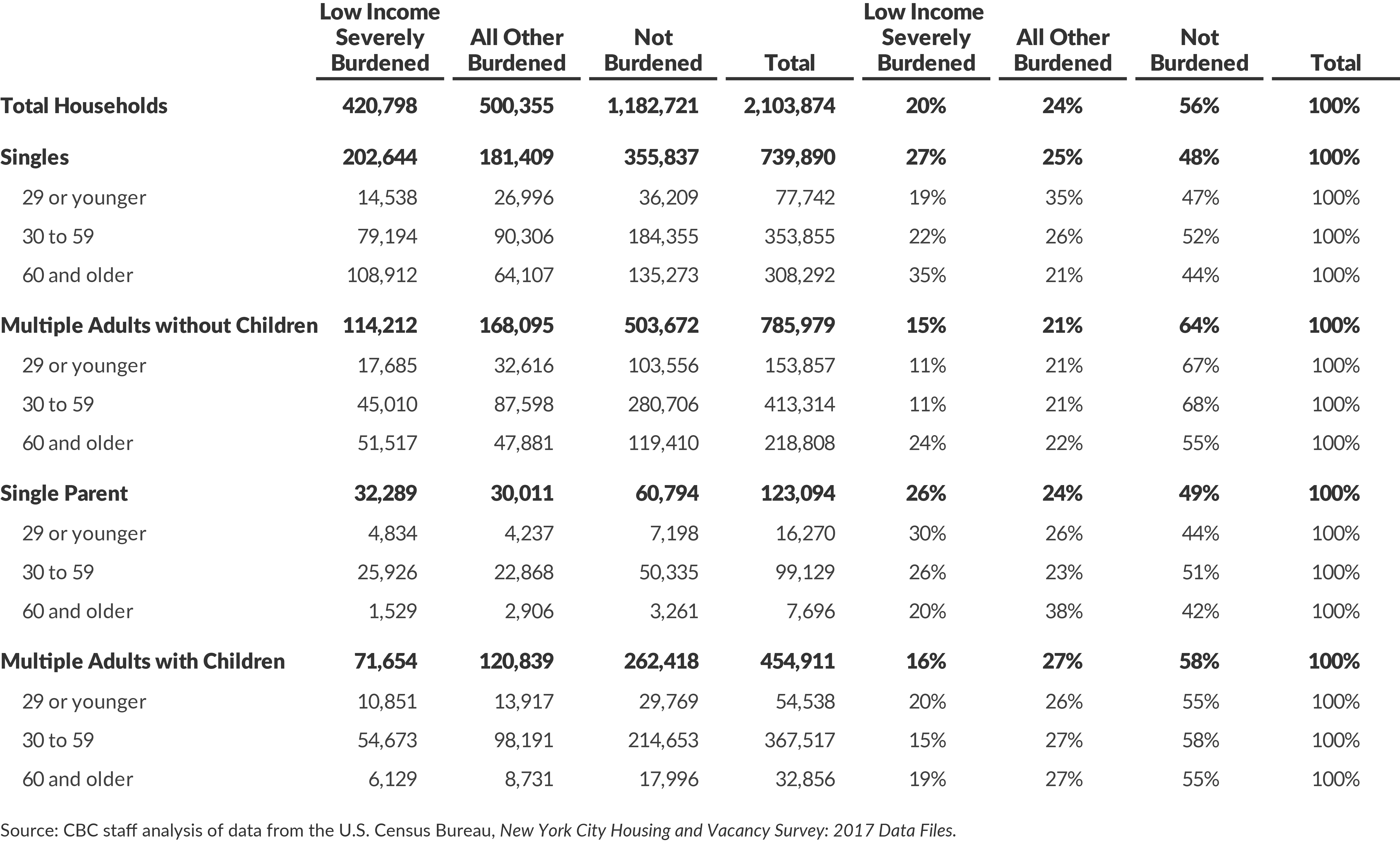