The New York State Executive Budget and Financial Plan for fiscal year 2019 proposed by Governor Andrew Cuomo includes $3 billion–$750 million annually in each of the next four years–from the proceeds of conversions of health insurers from nonprofit to for-profit status.1 Counting on this revenue is not prudent because:

The Precedent and the Uncertainty

Nonprofit insurers accrue financial benefits from tax exemptions in exchange for the community benefits they provide, such as helping to insure low-income individuals.4 When a nonprofit insurer converts to for-profit status or is acquired by a for-profit entity, State governments generally receive the value of the assets the nonprofit has accrued. Typically the States transfer the new found wealth to charitable foundations or fund public health programs.5

The most notable conversion in New York was that of Empire Blue Cross Blue Shield (Empire), a process that began in 1995.6 Empire initially planned to endow a charitable foundation upon conversion.7 After years of negotiations among Empire, Governor George Pataki, the Legislature, and labor unions, New York State in January 2002 enacted a law to authorize and regulate the conversion.8 Under these provisions of the State Insurance Law, the State must be provided the full market value of the entity as approved by the Department of Financial Services (DFS)  and the funds must be divided as follows:9 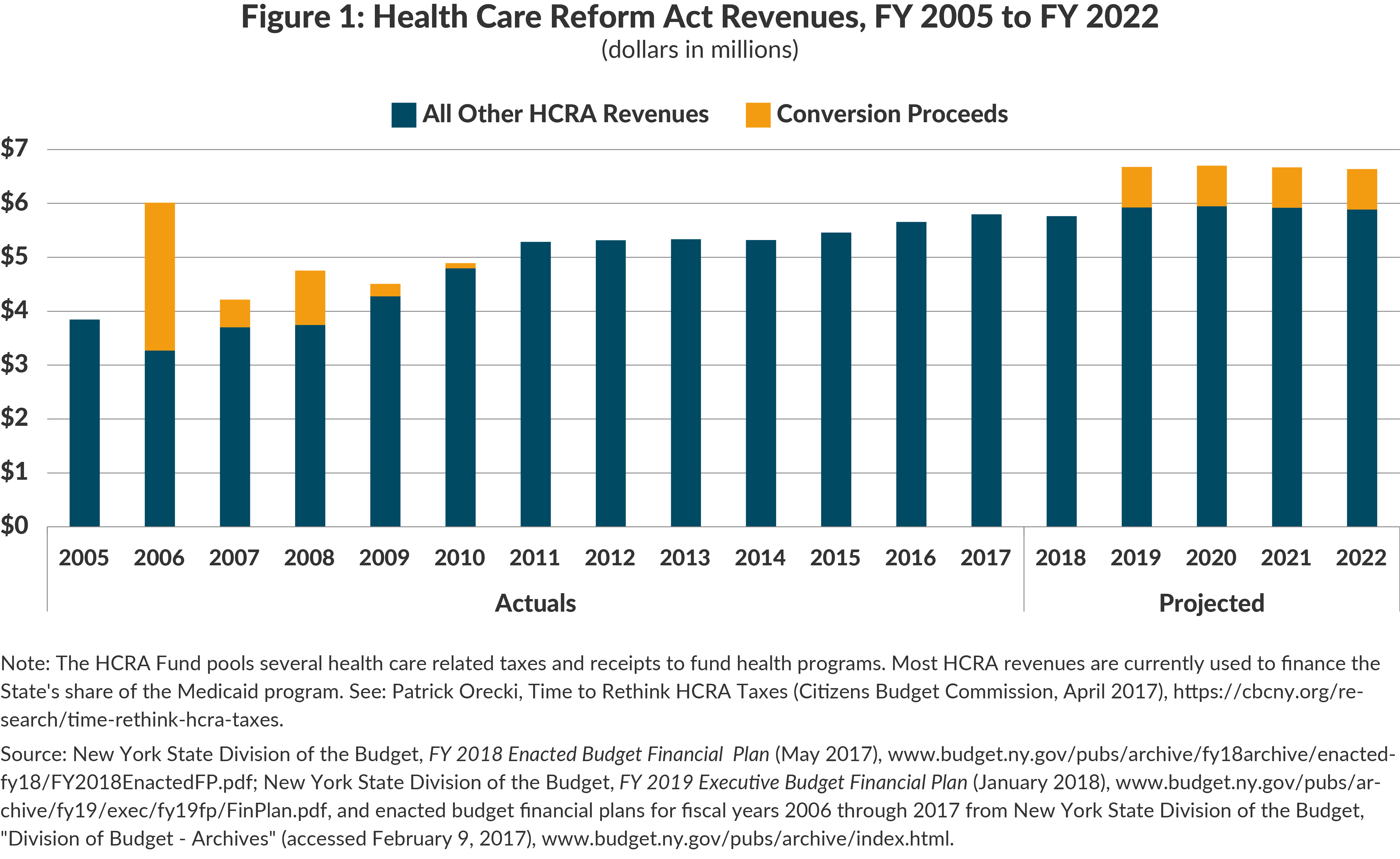 Although the Empire conversion did not occur as initially planned, it did eventually materialize. This is a contrast to the anticipated, but unrealized, EmblemHealth (Emblem) conversion. Following the merger of Group Health Incorporated (GHI) and the Health Insurance Plan of Greater New York (HIP) under the name Emblem, Emblem submitted a plan of conversion in April 2007 and resubmitted the plan in December 2007. The State held public hearings related to the proposed conversion in January 2008.16 Later that year Emblem halted proceedings to convert, requesting its submitted plan be suspended prior to a final ruling by the State.17 Emblem’s leadership later made clear the insurer had scrapped plans to convert.18 The expectation of Emblem conversion revenues was the basis in part for the State’s projection of billions from conversion proceeds in the fiscal year 2009 Financial Plan, but the revenues were never realized.

The Governor’s budget proposal does not identify a specific transaction to yield the $3 billion, but the context is a September 2017 announcement of negotiations between for-profit Centene, the nation’s largest Medicaid managed care organization, to acquire nonprofit Fidelis for a publicized price of $3.75 billion. Fidelis is the largest Medicaid managed care insurer in New York and operates in all 62 counties within the State. The companies expected the deal to close early in 2018.19 If DFS approves the fair market value at $3.75 billion, it would yield $3.375 billion for the State and $375 million for the NYSHealth.20 The proposed budget includes no new statutory changes and assumes the existing language in insurance law will capture this transaction. However, the Fidelis acquisition differs from the Empire conversion in that it is a purchase rather than a conversion, and Fidelis is licensed under Public Health Law, not State Insurance Law.21 Fidelis–the New York State Catholic Health Plan–plans to use the conversion proceeds to fund a charitable foundation to promote health and health care in the State.22 Following release of the Executive Budget, the Catholic Church called the state’s plan “unprecedented” and “alarming,” and said the State did not have legal authority to claim the conversion proceeds.23 A lengthy negotiation and potential litigation makes an assumption of revenues from this transaction in the coming fiscal year risky.

Strike 2: The Revenue Estimate May Be Too High

The revenue assumptions from nonprofit conversions may also be optimistic in terms of the likely amounts. Despite the price tag publicized for the Fidelis acquisition, such high figures may be unrealistic. Sale values are rooted in the net assets and potential income of the acquired firm. Table 1 presents the net assets and net income in recent years of the large nonprofit managed care plans serving the New York Medicaid market. Fidelis is clearly the largest and most valuable of these entities. It has a Medicaid enrollment of nearly 1.3 million, net assets of nearly $1.2 billion, and net income of more than $250 million. But even these impressive figures appear to justify a $3.75 billion price only if rapid and significant growth continues; that price is more than double the recent net assets and about 15 times the latest net income. The actual price for the entity, if acquired, might prove less than publicized. Furthermore the market value for other nonprofit insurers that may convert likely would be substantially less than that of Fidelis. 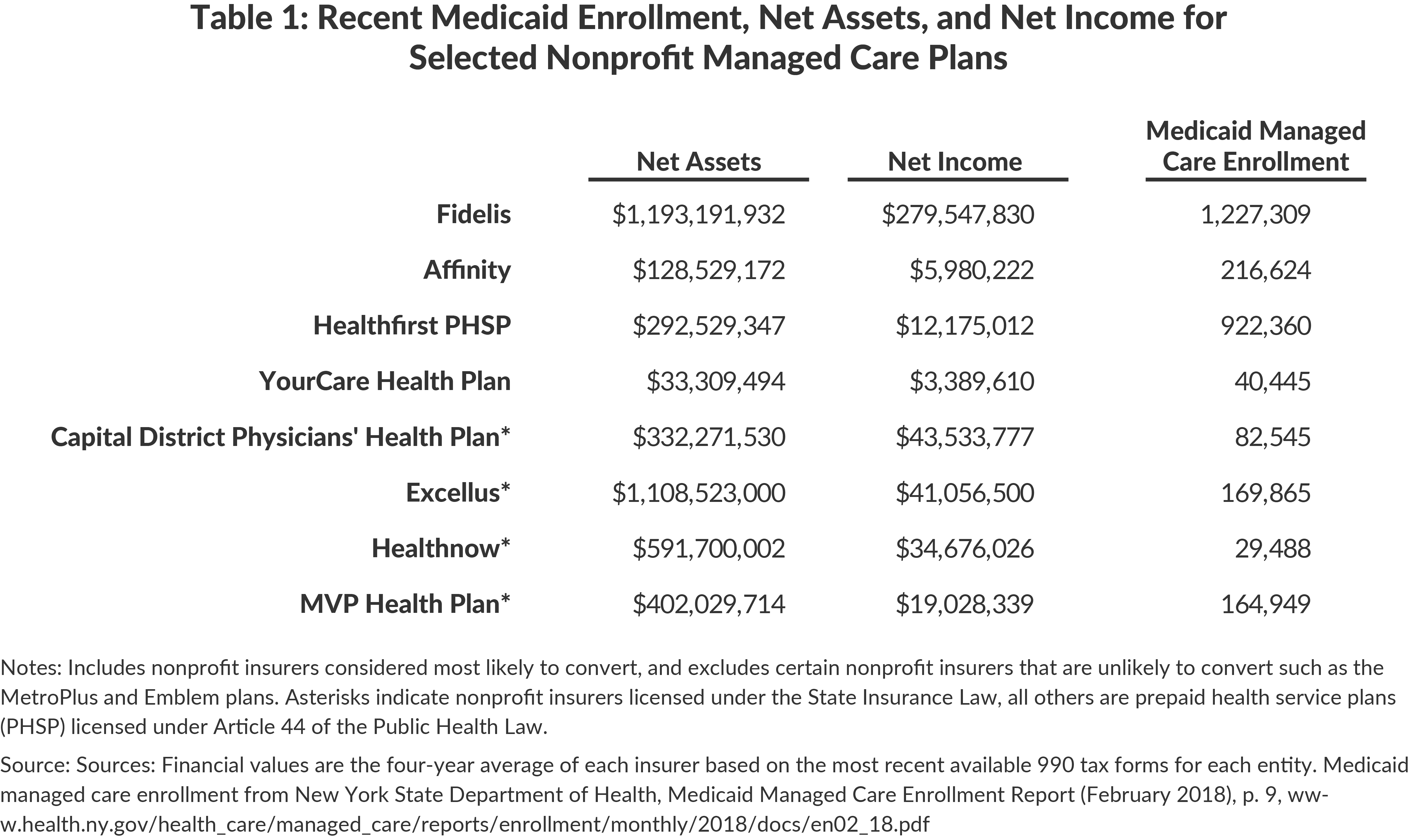 Strike 3: The State’s Use of the Proceeds is Inappropriate

The Governor’s Financial Plan indicates the anticipated revenue of $750 million annually will be used in two ways. First, $500 million annually ($2 billion cumulatively over four years) will be used to help pay for the Medicaid program; the use of these speculative, nonrecurring windfall revenues to pay for ongoing activities is imprudent. Such revenue cannot be counted on to continue to support State operations and likely will create or increase future budget gaps. Additionally, the State’s capture of these “public assets” is based on the reasoning that the community benefits provided by a nonprofit insurer should be retained in the community. But the State is not investing the money in programmatic enhancements; it is offloading the funding to reduce planned Medicaid spending in the State’s General Fund.24

The remaining $250 million annually ($1 billion cumulatively over four years) will be put into a reserve to offset future federal cuts in health programs. The latter use is appropriate because it is a reserve to cushion future revenue losses and to help implement longer term adjustments that may be necessary. As the Citizens Budget Commission has previously recommended, nonrecurring resources are best used to repay debt, support capital investments, increase reserves, or make possible other desirable one-time expenses.25

More than a decade ago, receipts from conversions of insurers from nonprofit to for-profit status peaked at $2.7 billion in a single year. The lone known insurance acquisition currently being negotiated is likely to experience delays, and whether or not and how much of the proceeds go to the State is not clear. The State budget and financial plan should not depend on $2 billion from this precarious source. Furthermore, any proceeds earned by the State should not be used for multiyear budget balancing. These revenues are episodic and finite and should be used to bolster reserves or fund one-time costs after proceeds are received by the State.