One would think a fire department’s chief responsibility is to fight fires. But when a New Yorker sees a firetruck heading down the street with its lights flashing and siren sounding, the odds are less than one in five that the firefighters are headed to a fire; it is more likely that they are responding to a medical emergency.1

Medical emergencies have outnumbered fires since the municipal ambulance service, known as the Emergency Medical Service (EMS), merged with the New York City Fire Department (FDNY) in 1996. 2 But the merger was not accompanied by a fundamental transformation of the organization and staffing of the FDNY. As a result, the FDNY does not efficiently address its most common job: responding to medical emergencies.

The FDNY leadership has recognized this major challenge. Its 2015 Strategic Plan established a goal of integrating fire and EMS services to enhance emergency medical service. 3 The measures they are taking in pursuit of this goal are constructive, but incremental; bolder actions are essential for meaningful progress.

This policy brief documents the increased volume of medical emergencies and highlights the continued allocation of most of the department’s resources to firefighting despite the declining role of that function. This brief provides three strategies, spanning from short term to medium and long term, for addressing the mismatch.

The Changing Mix of Services

The dominant service the FDNY provides is medical emergency response.  In 2014 three-quarters of the 1.3 million incidents to which FDNY vehicles responded were medical incidents—compared to only 5 percent fire-related incidents, and 20 percent non-fire, non-medical incidents.4

Since 1998, the first year for which comparable data are available post-merger, three trends have been evident.5 First, the number of fire-related incidents declined 49 percent over the period to less than 62,000 in 2014. The sharpest decline, about 70 percent, was in false alarms, which have dropped to one-third of fire incidents, or 55 per day, thanks to improved technology, such as caller identification and modernized call boxes. Non-structural fires, such as trash or auto fires, also declined more than 50 percent to an average of about 42 per day in 2014, or one-quarter of all fire related incidents. Structural fires, which are fires in buildings, averaged about 73 per day and were about one of every four fire incidents in 2014. Structural fires dropped about 9 percent since 1998; improved building codes and technology have helped reduce fires in commercial buildings and large apartment buildings, but fires in smaller residential structures remain a persistent problem.6

Second, the volume of non-fire, non-medical emergencies increased from more than 165,154 to 226,724, or 37 percent, from 1998 to 2014.  In 2014 they averaged 621 per day citywide, more than eight times the number of structural fires. Non-fire emergencies include a wide variety of situations, such as search and rescue events resulting from building collapses or elevator malfunctions, utility disruptions, hazardous materials incidents, response to catastrophic weather events, and terrorist attacks.7 Some of the increase can be attributed to expanded responsibilities, including fire unit response to motor vehicle accidents (supplementing EMS and Police Department responses since 1997) and gas leaks (since 2014).8 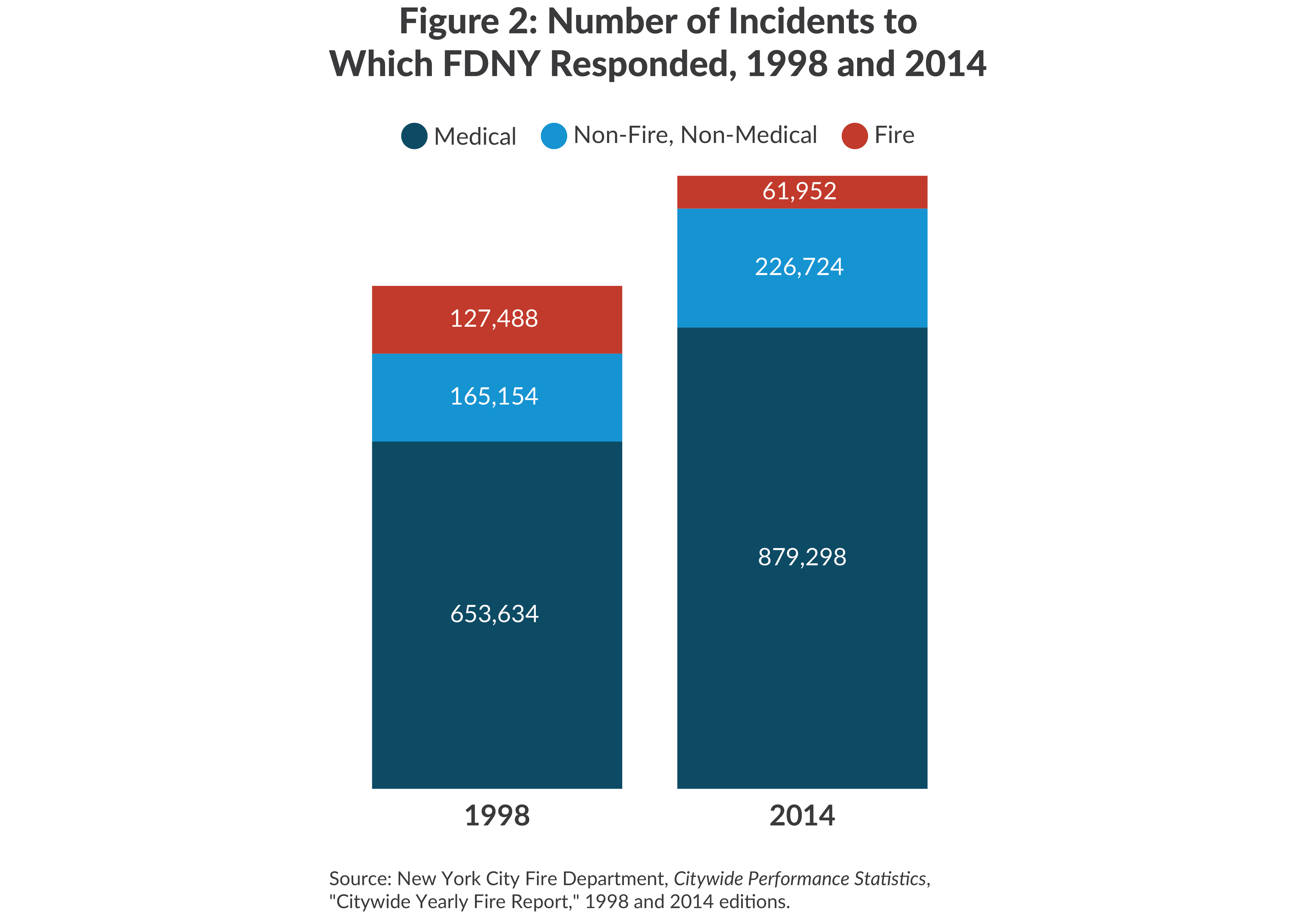 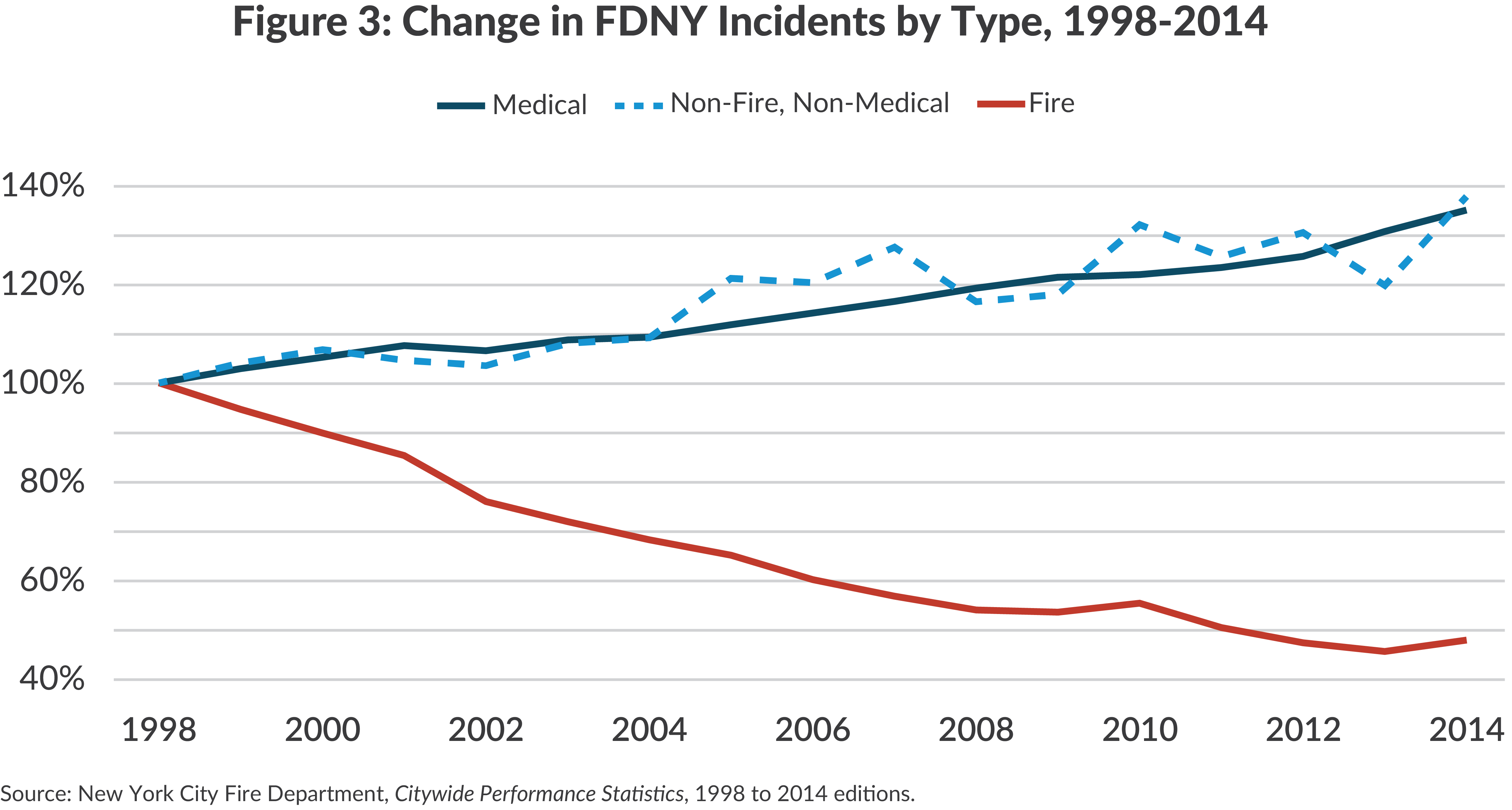 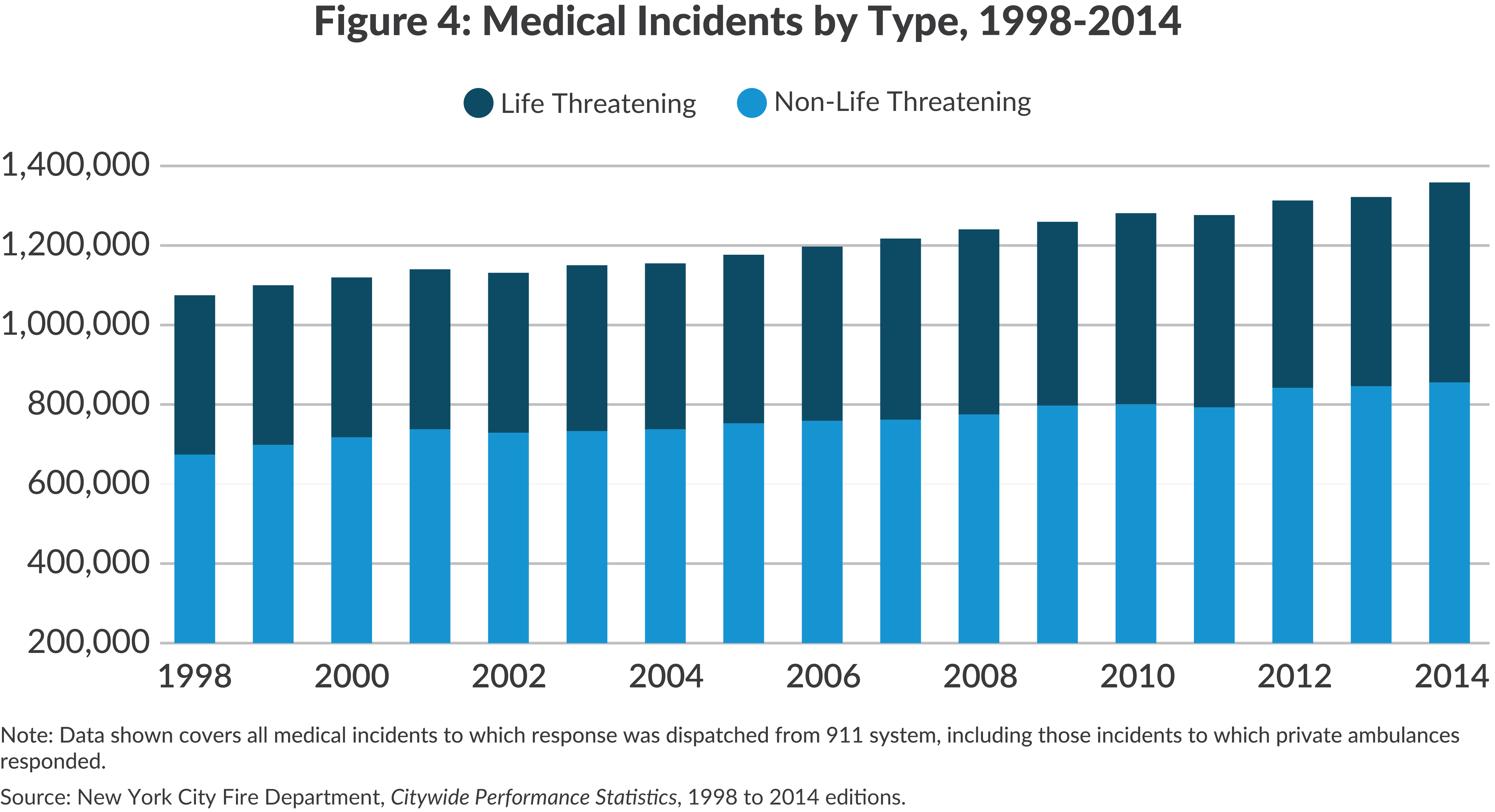 In fiscal year 2015 the FDNY’s total budget was more than $3.8 billion. 10 Despite the preponderance of medical incidents and the continued decline in fire incidents, most of the department’s resources—71 percent of the budget and two-thirds of personnel—are devoted to staffing fire units.  The 10,789 fire personnel well outnumber the approximately 4,700 emergency medical technicians (EMTs) and paramedics, and EMS operations are funded at $500 million annually—just 13 percent of the budget.

Because the FDNY was not fundamentally reorganized in the wake of the merger, the FDNY sought to adjust to the mismatch between incidents and resources by training and requiring some firefighters to respond to certain medical emergencies; including medical responses by fire units brings resources for emergency medical services to 28 percent of the budget.11

Nevertheless, the workload of the two major service divisions differ notably, and the current arrangement is costly and redundant.

The 218 firehouses across the city house 198 engine companies, 143 ladder companies, and 16 specialized companies assigned to rescue activities, marine equipment, or handling hazardous materials.12 Engine companies are staffed 24/7 by four firefighters and an officer, and work with “pumpers,” large trucks that pump water onto fires at the scene of a fire or other emergency.13 Ladder companies staff trucks with extension ladders and equipment to ventilate fires and perform search and rescue operations. Ladder companies are staffed 24/7 with five firefighters and an officer.

Firefighters receive 18 weeks of training. Firefighters assigned to an engine company are trained as Certified First Responders with Defibrillation (CFRD), which requires an additional 80 hours of training, and can provide immediate assistance to people with some life-threatening medical conditions such as cardiac arrest, choking, drowning and allergic reactions. Salaries start at $39,370 and reach $76,488 after five years (not including overtime and other differentials).14

The EMS is organized geographically with five borough divisions. Ambulances may be assigned to an EMS station, to a combined fire/EMS station, or a designated street intersection where they await a dispatch. EMS staff work eight-hour shifts, but staffing is not uniform for all hours and days of the week; the number of ambulances varies by shift and day of the week based on anticipated demand for the service.

The EMS has a fleet of 421 ambulances of which about 80 percent operate daily.17 Ambulances are staffed and equipped to provide one of two levels of service. A basic life support (BLS) ambulance can serve people needing cardio-pulmonary resuscitation (CPR), oxygen, bleeding control, stabilizing broken bones, and similar emergency responses.  An advanced life support (ALS) ambulance carries more advanced equipment and medications to serve those with more medically difficult conditions, like those requiring intubation.

Emergency calls to the citywide 911 service are screened and referred to an FDNY dispatcher when appropriate. The dispatcher decides what type of unit to send to the incident. For fires a minimum response is one engine company and one ladder company; more companies are sent to more serious fires.

Response times for engine companies are generally quicker than for ambulances, but firefighter response is limited in important ways. First, firefighters cannot offer transport to a hospital; engines are not equipped to transfer patients, and firefighters cannot be “out of commission” for very long in the event there is a fire or other emergency. Second, firefighters have less extensive medical training than EMTs and paramedics; even when firefighters can provide meaningful assistance, protocols require an ambulance to arrive and take over, necessitating a redundant dual response.

Bolder strategies are needed to rethink FDNY services in order to better accommodate the growing demand for medical emergency responses and reduced need for firefighting activities.

The FDNY has petitioned the NYC-REMSCO unsuccessfully for permission to change ALS ambulance staffing to one paramedic and one EMT.24 It should apply again, and the change should be approved. It would not diminish the quality of care and would yield about $5 million in savings, which could be reinvested to expand the number of ambulance tours.25

Medium-term: Increase the medical training of firefighters so they can handle more situations without reliance on a separate ambulance and its staff.

Training firefighters as EMTs is already a common practice among departments in major U.S. cities including Chicago, Dallas, Houston, and Phoenix.26 Having at least one of the firefighters staffing an engine company trained as an EMT would require training about 850 or roughly 8 percent of uniformed personnel. Approaches for reaching or exceeding this goal include having firefighters who previously served as EMTs or paramedics renew their credentials; requiring officers assigned to engine companies to receive EMT training; or, more broadly, subsidizing the training for all current firefighters (about $1,200 per person).27

Over the long term, it may be preferable to require EMT qualifications for new applicants for firefighter jobs, which would also effectively create a career ladder for advancement among the EMS staff.

Having more firefighters trained as EMTs would yield two benefits. First, medical incidents to which engine companies are being dispatched could be handled more effectively and efficiently. In addition, in cases where transport is not required, it might not be necessary to dispatch an ambulance to the incident. Second, fire companies could respond to a wider range of medical incidents. The EMT training would enable fire companies to respond to many non-life threatening incidents now handled by BLS ambulances. This greater response capacity could reduce the need for BLS ambulances and/or speed response times to such incidents.

The Houston Fire Department (HFD) is an emergency service agency that has effectively handled a growing volume of medical emergencies by integrating its medical and firefighting staffing.

In the 1980s HFD began training firefighters as EMTs and dispatching them to medical emergencies. Subsequently, the HFD trained all new fire cadets as EMTs. Training is a continuous process: it starts with EMT training and is followed by fire academy training. During the first four years of service, firefighter/EMTs rotate between BLS ambulances and fire trucks gaining experience with the full range of services. Thus it is the same staff working on fire trucks and BLS ambulances.

Houston has successfully remodeled its department such that all personnel are able to address many medical emergencies as well as fire-related incidents. The expectations of recruits match these responsibilities. Many cadets attend the academy with the goal of serving as firefighters, but they understand that their primary responsibility is to respond to community needs by also being capable of handling the numerous medical emergencies.

The sharp contrast between the persistent trends in the FDNY’s service demands and its traditional allocation of resources to fire companies suggest significant reforms are needed. The relationships between the two services should be redefined, and the financial and human resources provided for each type of emergency service should be rebalanced. This will require rethinking not only personnel training, but the types of equipment needed and the use, placement, and deployment of these assets. It is no small task, and will require extensive analysis of neighborhood demographic, building, and service trends; new and more nimble staffing arrangements that must be implemented through collective bargaining; and procurement of new technologies.

As noted earlier, the FDNY leadership has identified integration of fire and EMS services as a long-run goal and has cautiously begun this process. Interim objectives include increasing the number of EMS tours and more training for firefighters in handling medical conditions. With respect to future medical training, the Commissioner Daniel Nigro in a recent internal newsletter reported that among the changes under discussion are CFRD training for ladder companies and EMT training for engine companies.”28 These modest and conventional measures may be positive steps, but future strategies should be more extensive and creative. New York should begin to lead the nation’s cities in the integration and redesign of firefighting and emergency medical service missions.

By Mina Addo and Charles Brecher