Getting More Out Of A Billion Dollar Taxpayer Contribution

In fiscal year 2018 New York City taxpayers are projected to contribute $1.1 billion to 108 union-administered benefit funds. These funds pay for supplemental health, legal, and educational benefits or function as annuities to supplement retiree pension income for members. Many funds incur excessive administrative expenses, build unnecessary reserves, or suffer from mismanagement. In the near term, the City Comptroller’s oversight should be strengthened to address these shortcomings. In the long term, the City and labor unions should restructure how these supplemental benefits are provided. Doing so has the potential to create more than $160 million in savings for the City and improve the benefits to which members have access.

Union benefit funds are trusts established by unions representing New York City public employees to provide supplemental benefits to their members. They are funded primarily by City contributions. In fiscal year 2014 the City contributed $1.1 billion to 108 union-administered benefit funds operated by 58 separate unions, which in turn paid out more than $1 billion in benefits.

Benefit funds are operated by the unions in accordance with Trust agreements made with the City. The New York City Comptroller establishes accounting, auditing, and financial guidelines in Directive #12 of the Comptroller’s Internal Control and Accountability Directives.1 Directive #12 also requires that the funds report annual financial and operating data to the Comptroller, who produces a review of funds’ financial and operating practices based on that reporting. This analysis focuses on the 91 benefit funds included in the June 2017 review covering fund financial data for fiscal years ending in 2014.2  (See Table 1.)

1. Welfare Funds: Active and retired city employees receive generous health insurance benefits at a significant cost to taxpayers: in fiscal year 2018 New York City is projected to spend $6.3 billion on health insurance benefits.3 City-funded health benefit plans cover hospital and medical insurance and are administered centrally by the City for all beneficiaries. To supplement this health insurance, many unions establish welfare funds to provide dental, optical, and prescription coverage and nonhealth benefits, such as tuition reimbursement and legal services. The benefits are funded almost entirely by City contributions which are administered by union representatives.4

One of the advantages of having separately administered welfare funds is that each union can specifically tailor a benefits package to its membership. The Comptroller’s review of 64 welfare funds found, however, that many offer the same categories of benefits. As shown in Table 3, all surveyed funds offered dental and optical benefits, and nearly 80 percent offered prescription benefits. In a 2010 survey of three large welfare funds, the Citizens Budget Commission (CBC) found that 57 percent of benefit expenditures went toward prescriptions and 29 percent paid for dental care. Optical benefits, while ubiquitous, are relatively less costly, accounting for less than 1 percent of benefit expenditures.5 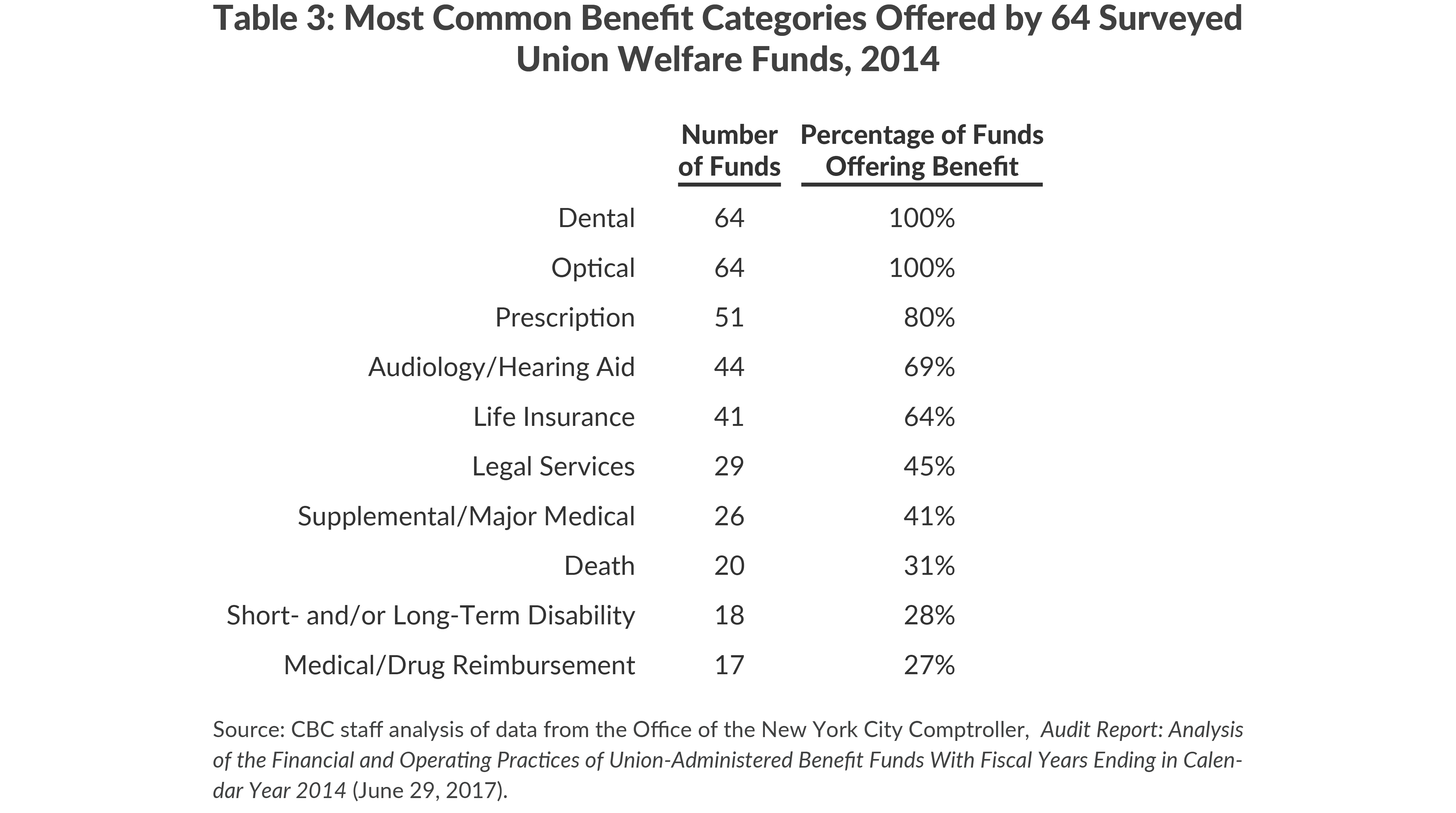 2. Annuity Funds: In fiscal year 2018, the City is projected to contribute $9.6 billion into its five defined-benefit pension funds from which retirees are paid. To supplement this pension income, 32 unions have negotiated with the City to establish separate annuities that also pay out upon retirement. The largest of these funds are District Council 37 (32,000 members), the Patrolmen’s Benevolent Association (31,000 members), and the Uniformed Firefighters Association (18,000 members). Similar to the welfare funds, these annuities are administered by union representatives and are funded by annual contributions made by the City: in fiscal year 2014 the City contributed $122.9 million to the 27 annuity funds included in the Comptroller’s report. Annuities also earn investment income; net assets totaled $7.2 billion in fiscal year 2014. 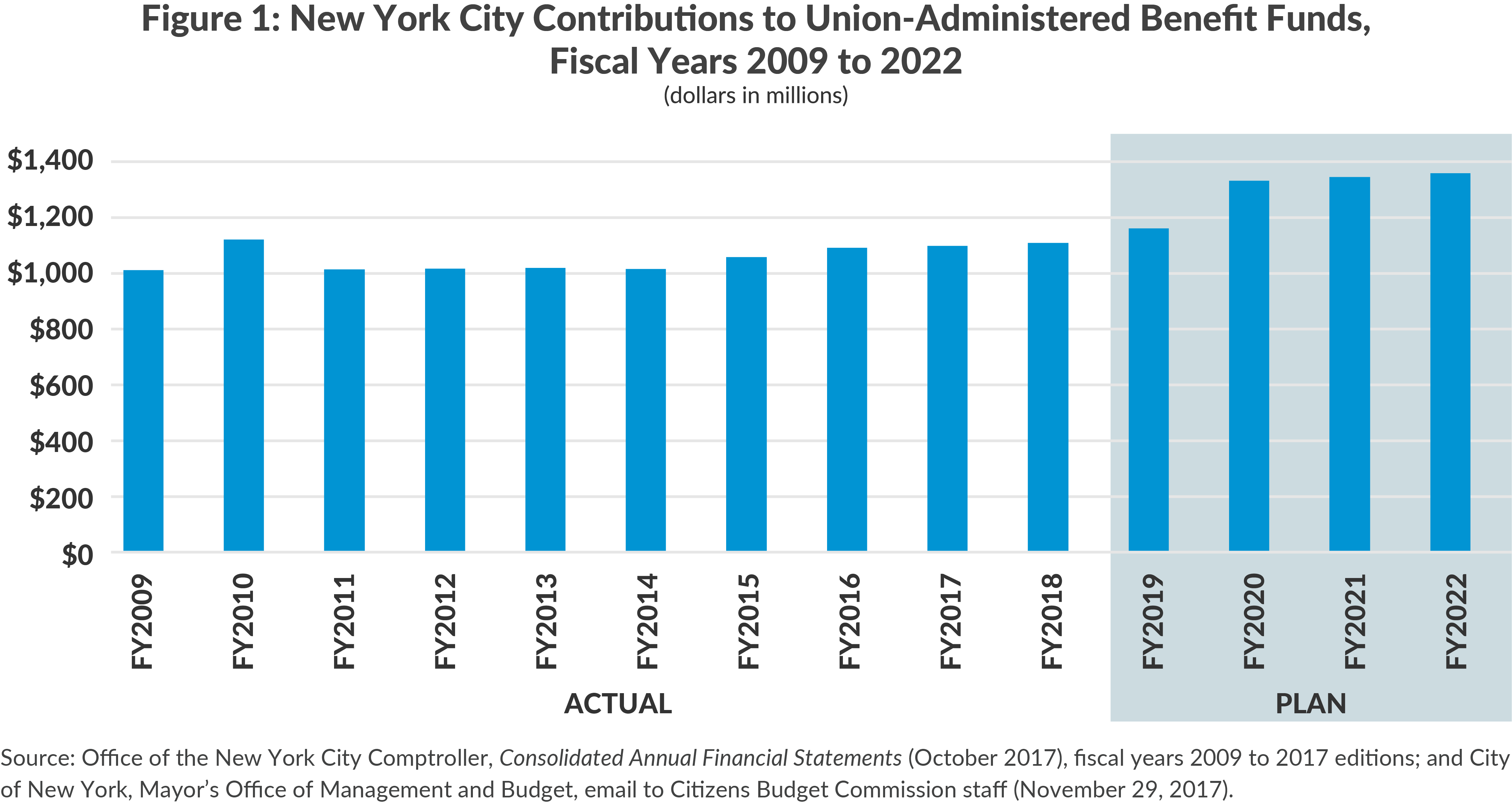 Information on the funds’ operations is provided by the Comptroller’s office through its annual report assessing funds’ financial and operating practices and occasional audits of individual funds. The audits and annual reports reveal that many funds have problems with: (1) excessive administrative expenses, (2) unnecessary reserves, or (3) mismanagement. 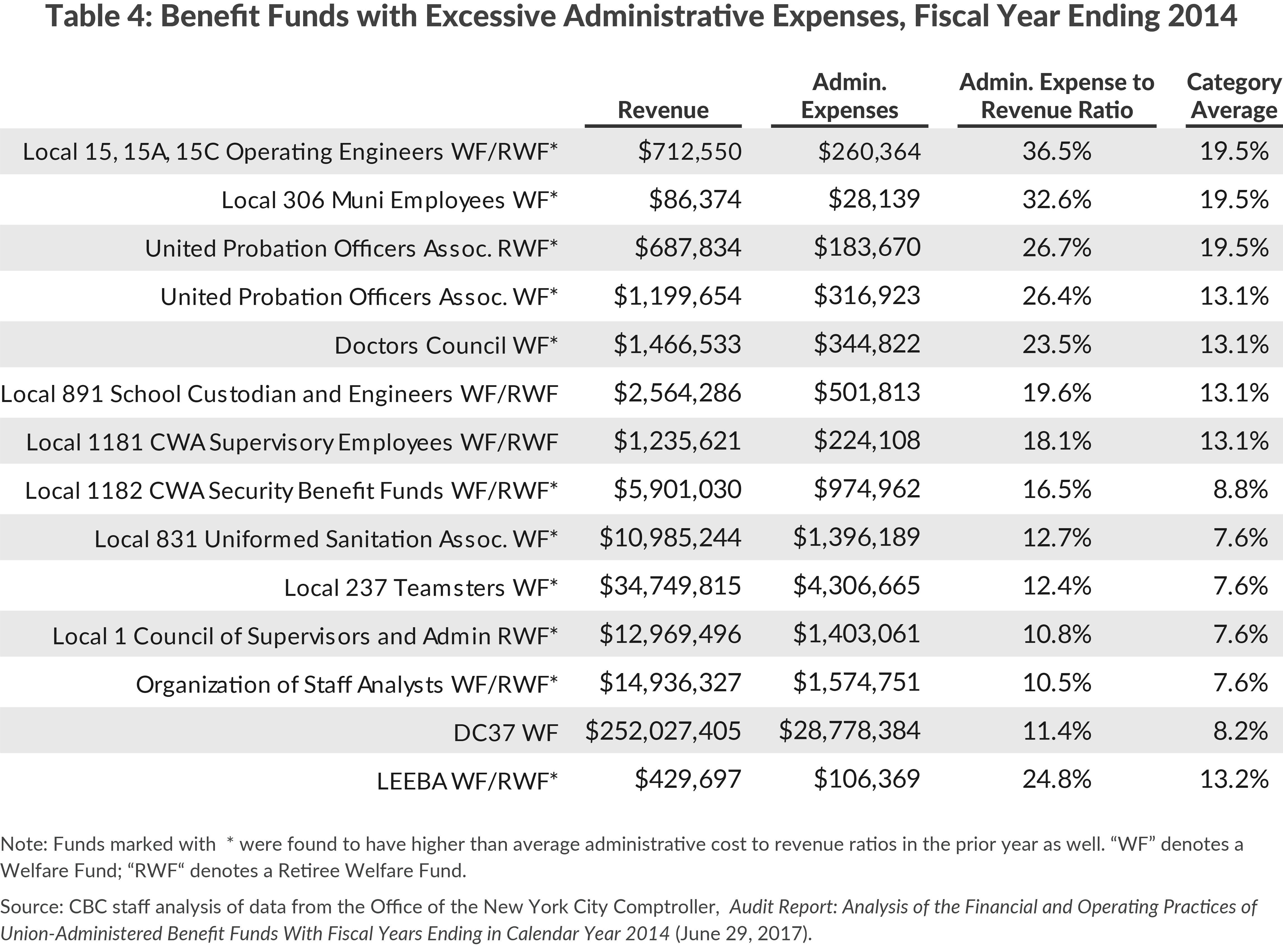 Unnecessary Reserves:  Unnecessary reserves mean that the City’s contributions are going unused or a fund is not maximizing the benefits it could provide its members. Smaller funds are more likely than larger ones to maintain excess reserves. The fiscal year 2014 Comptroller’s report identified 27 welfare funds in which reserves were above what is considered to be reasonable, defined as 200 percent of annual revenues. Each of these funds was also found to have excessive reserves in the prior year. As is shown in Table 5, 63.6 percent of funds receiving less than $1 million in City contributions had unreasonably high reserves, while none of the funds receiving more than $20 million in City contributions did.

Fund Mismanagement:  Numerous audits by the Comptroller cite mismanagement as an issue and identify varying degrees of management deficiencies. A 2011 audit of the Social Services Union Welfare Fund found that the fund reimbursed two dental assistants $288 dollars for sneakers.9  A 2009 audit of the Superior Officers Council Health and Welfare Fund found that it did not have documentation to support $3.1 million in benefit payments, 71 percent of its total benefit payments.10

The findings of a recent audit of the United Probation Officers Association’s Welfare Fund, published in May 2017, found: failure to properly track employee hours, provision of in interest-free loan to an employee without written agreement, prohibited stipends to trustees, failure to verify dependent eligibility, questionable benefit claims, and failure to inform members for which benefits they were eligible.11 An accompanying audit of the union’s retiree welfare fund found that no records were kept of hours worked despite spending $183,670 on employee compensation. The last time this fund was audited, in June 2009, other irregularities were found: it was determined the fund had made $140,000 in questionable or improper payments, and it produced fictitious minutes for Board of Trustees meetings.12

The Comptroller’s oversight of benefit funds should be strengthened. The annual reports focus on overall revenues and expenditures without examining details through which mismanagement is most likely to be identified.  While the reports indicate which funds are outliers on certain metrics, they neither determine why nor make specific recommendations as to how funds could better comply with Directive #12 guidelines. The reports are not timely as they are often delayed by the tardy submittal of financial information from the union funds.

The Comptroller’s audits of individual funds should be more frequent and numerous. Between 2009 and 2017 there were 11 audits of 9 funds, and only $44.5 million out of $10.3 billion in City contributions to welfare funds during that audit period, less than one-half percent, were subject to an audit. The audits that have been conducted identify serious mismanagement and make recommendations for improvement; the Comptroller’s office follows up with funds to determine whether corrective actions have been taken and occasionally conducts a follow up audit, but it has no authority or responsibility to ensure the recommendations are implemented.

CBC recommends the Office of the Comptroller, in partnership with the Office of Labor Relations (OLR) and union leadership, expand oversight of union-administered welfare funds through the following actions:

As previously described, smaller funds have high administrative costs and a tendency to build unnecessary reserves. Moreover, they are not able to optimize arrangements with health insurance organizations as  the volume of “covered lives” involved is a major factor, and they may lack the expertise to purchase the most appropriate benefits packages.

Given that members of smaller benefit funds are disproportionately burdened by these inefficiencies, CBC makes the following recommendations to restructure how benefits are provided:

It is anticipated that the City, in ongoing collective bargaining negotiations with labor, will seek to offset pay increases though concessions on other benefits, including contributions to benefit funds. Improving oversight and reforming the structure of benefit administration would reduce costs while maintaining benefits. This should be both the City’s and unions’ preferred option moving forward.

This policy brief is an update of the CBC report Better Benefits from our Billion Bucks: The Case for Reforming Municipal Union Welfare Funds published in August 2010.

Union-Administered Benefit Funds: Getting More Out Of A Billion Dollar Taxpayer Contribution